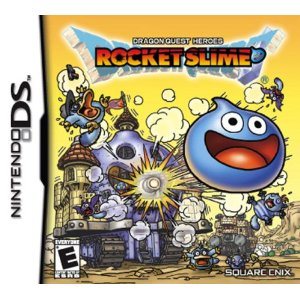 Those of you who have played Dragon Warrior/Quest games will remember that the slimes are the weakest enemies that you encounter in the series. This is the story of a slime named Rocket who saves his village of Boingburg from the evil plob. The story is pretty simple: Rocket and his friends were playing in the palace garden when they stumbled upon the Warrior Flute. They blew on it, which alerted the plob (mob, get it?) of its location and so the plob kidnapped all the inhabitants of the town and decimated it. Armed only with the broken flute, Rocket must now rescue all one hundred villagers and stop the plob.

After the opening story, you can explore what’s left of your town and chat with the few inhabitants that remain. The church is where you go to save your progress. The story unfolds as you explore the different areas of Slimenia. Each area has a set number of slimes that need to be found and rescued and there’s a boss creature that must be defeated before you can reach the next area. As you rescue slimes you’ll gain access to new areas of the town including a store, museum, and the library. 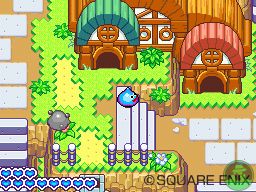 Although Rocket is just slime, he's more of a threat than he might first appear. He can carry up to three objects at a time, but if he\'s fully loaded and you find something else you want to carry there are train carts scattered around that you can unload your findings into and send them off to town. In this game you’ll want to collect everything you find. And I mean everything. Monsters, empty treasure chests, boomerangs, arrows, fruit and anything else you can grab. The items you collect can be used for ammo, or you can combine them into more powerful objects using alchemy. Rocket only has one attack move: the elastoblast. He stretches like a rubber band and flings himself at enemies and objects. If an object is flung into the air, Rocket can carry it if he catches it before it hits the ground. If Rocket is hit by an enemy, all the objects he’s carrying are dropped. Rocket starts off with three life hearts but throughout the game you’ll be awarded some and can find others hidden in the town if you carefully explore your surroundings.

Rocket’s true power lies within the Schleiman Tank which can be summoned by blowing the repaired Warrior Flute. At first you’ll be in charge of collecting and firing the ammo alone. But later, you’ll be able to recruit friends to help you in the battles. Your friends have specific skills like healing the crew, healing the tank, stealing ammo from the enemy, sabotaging the enemy ship, or manning the cannons. 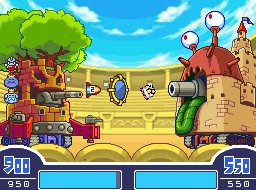 The tank battles are a huge part of this game, and choosing the right kind of ammo is a huge part of winning the battles. You can pick and choose your own ammo or take the advice of your helper. In town, you can create upgrades that boost your tank\'s hitpoints. Sometimes they only cost gold but most of the time, specific objects will be required to upgrade the tank.

The multiplayer in this game comes in two modes: tank battle and surfing. In surfing mode you have to collect as many coins as possible before the time runs out. Both of these modes can be played using only one game cartridge.

After you beat the game\'s singleplayer campaign you can keep playing, whether you want to finish collecting monsters, complete some more side quests, or collect extra-powerful ammo for your tank.

Graphically this game is pretty typical for a Dragon Quest game. Sprites, smiles, and vivid colors. The town and its surrounding areas are very bright and colorful. The enemies are all very unique, including their animations and behaviors. The living statues are quite spooky.

The enemies have their own unique voices, noises and sound effects too. The music is very pleasant and Dragon-Questy. I was somewhat annoyed that the enemy theme music had an odd loop featuring a person saying/singing “Boom Chicca Pow!”.

When it comes to appropriateness issues... where to start. The slimes are not the atheistic globs of muck you might think, as they all worship a goddess of some sort. Holy water and goddess statues are two kinds of ammunition you can use in your tank. The church in town has some catholic references, including a "Mother Gloopierior". The other thing worth mentioning is that the plob father, Don Clawleone, smokes a cigar in a cut scene. The violence in this game is very cartoony and most of it is directed toward enemy tanks.

This is an older game so the price is relatively low on Amazon, but it may be hard to find at local retail stores. If you or your kids have a DS and enjoy Dragon Quest games I highly recommend this title, but keep the moral warnings in mind if you plan to buy it.