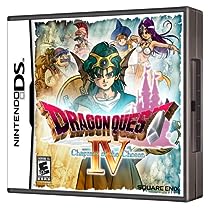 Dragon Quest IV: Chapters of the Chosen is a remake of the 1992 NES version which was released in the US as Dragon Warrior IV. In 2001, Japan had a PlayStation version but it was never released in the US. The story is pretty much the same but the graphics are improved along with the addition of a new chapter, dungeon, and a boss.

As the title suggests, this game is split into chapters. The first few chapters have you learning the back stories of random people who will unite with the hero and save the world from domination by monsters. The characters include various walks of life including a castle guard, an overweight merchant, a tomboy princess, and twin sisters who are avenging the death of their father. Each party member offers a different skill set including magic, healing, and sheer strength. One party member can tell fortunes and use tarot cards as a weapon.

Weaknesses: Multiplayer is limited to recruiting people to a town via wireless connection. That’s it.

Once you get to know all of the characters, they will all unite with the hero in chapter five and defeat Psaro the manslayer in his most powerful form. Once Psaro is defeated, the original game is over and you’ll see an ending sequence. If you load your newly saved game, you can defeat another evil boss. The ending is mostly the same but there are some differences.

The hero is a byproduct of forbidden love. The main protagonist is called Hero, he\'s both half-human and half-Zenithian, an angelic race that lives in a sky castle. In order to get the help of the Zeninthian dragon, you have to gather all of the Zenithian equipment needed to ascend into the skies. Besides this undertaking there’s tons of side quests and dungeons to explore. There are legendary magical staffs and swords to be found and they are definitely worth looking into. There are mini-medals scattered around the world and you can redeem them for nice equipment on an island castle called Mikikin’s Dominion. 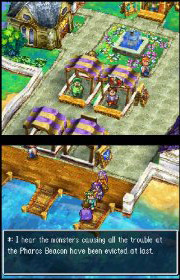 You can travel by foot, wagon, ship and eventually, by hot air balloon. The last three methods are available after completing quests. You don’t just get handed a wagon, boat or a hot air balloon. As you travel, time progresses and you’ll see unique monsters and get different NPC dialogues during the night.

Dragon Quest IV  plays out like many other classic RPGs. The random battles are pretty straight forward, and you can control the actions of your main characters. There are some temporary alliances and these party members have a mind of their own. You can tell your party to flee, defend, attack or use magic. If the enemy you told a person to attack is gone, they will automatically select another monster to attack.  When a battle is won, experience, gold, and sometimes a treasure chest is left behind.  When enough experience points are accumulated, a character levels up. The attributes and spells are automatically adjusted so there is no customization there. The only way you can impact your stats directly is by consuming seeds of magic, life, agility, strength, etc. The items you equip also impact your stats. Be careful, some items are cursed and you can’t remove them without the help of the church.

The church is where you save your games or record a confession as the game calls it. There is an option to quick save, but you have to load this up to resume your game. It replaces your save file so don’t depend on it as a backup or a duplicate. 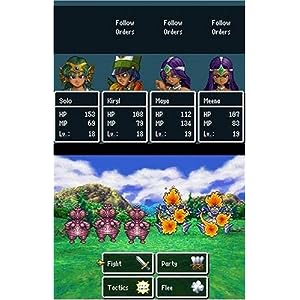 Graphically, this game is very unique. The game appears to be 2D and has a colorful painted look to it. There are 3D elements as you can rotate your view using the L and R triggers. This comes in handy when you’re exploring dungeons. In battle the graphics are in 2D but the enemies animate as they attack you and the magical effects add a little eye candy.

The background music is pleasant to listen to, but the speakers on the DS don\'t do it justice, so I would recommend using headphones to fully enjoy it. And while there is no voice-acting, the sound effects for both enemies and magic attacks are very fitting and well-done.

When it comes to appropriateness there are some issues worth mentioning. There is fighting and violence including cold blooded murder and female sacrifices. Some of the characters in your party are fighting to avenge lost loved ones. Magic use is unavoidable and there are some instances of fortune telling. One character can use tarot cards as a weapon.

Those issues aside, Dragon’s Quest IV is a great addition to the series. The character development is well thought out and there are some touching moments, especially at the end. I haven’t played the NES version but going from Dragon Quest IX to this, I miss the ability to see the enemies roaming around. The last few bosses are fairly challenging and will require some level grinding to defeat them. All in all I spent over forty hours playing the main storyline and getting some side quest weapons. I didn’t bother with the multiplayer feature; I can care less about populating a town with random people. If you don’t mind the appropriateness issues and lack of decent multiplayer, I recommend checking this game out.