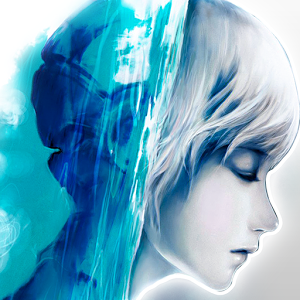 Crafted by Rayark Games, Cytus features a plethora of songs for anyone's particular taste. The music is beautifully composed, the artwork is magnificently designed, and the gameplay is deceivingly simplistic, addictive, and makes the player want to come back for more-- if only to hear that amazing song again!

As a game developed with touch screen devices in mind, Cytus allows the player to use their thumbs to dash across the screen and hit the notes in time with the music as it progresses. There are a variety of songs to choose from, with two difficulties to match. There is the easy difficulty-- which is what the game defaults players on-- and hard difficulty, which certainly lives up to its name. The player will be using three different types of notes to play the music, Clicks, Drags, and Holds. In order to determine when to hit a note, there is a black bar that goes back and forth from the top and bottom of the screen. Clicks are where the player simply tap the note on the screen when the bar passes through it. Drags are multiple notes that are eerily reminiscent of connecting the dots. Holds are when the player taps the note and “holds” it until the black bar is finished with the note. The learning curve is rather low-- once the player gets the hang of it they're sure to be able to adapt rather well to any other song thrown their way.

The game's story is set in a post-apocalyptic wasteland where humans have been driven to extinction by an unknown viral infection. The only living beings anymore are sentient robots that access human memories through data that is stored as music. The story of the game follows the protagonist, Vanessa, as she struggles with her identity. However, the story is rather difficult to follow without obtaining an external guide from the wiki or the website of the game itself. The primary way the story is told is through the chapter's covers. With the exception of Chapter K, there is not usually a coherent story within chapters and they merely feature interesting and phenomenal music. 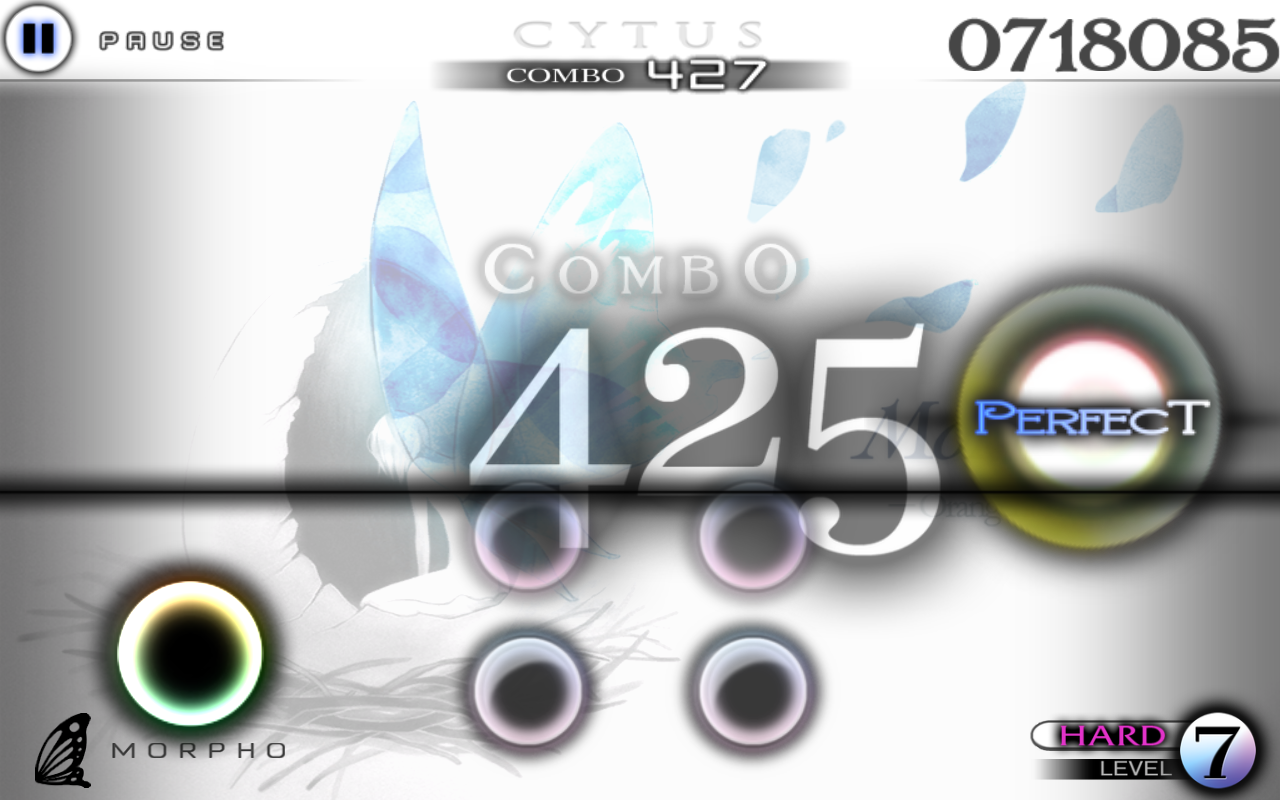 Strong Points: Intuitive use of the touch screen, beautiful music, powerful images
Weak Points: Story is tough to follow without using external sources, no assistance on how to find hidden tracks without using external sources, best used with headphones which-- depending on the phone and headphones used-- may get in the way of playing the game.
Moral Warnings: Darker art-style, sexualized robots

Now, with most music and rhythm games, the game lives and dies by its soundtrack. To some, the gameplay is merely the medium in which people get to play a song they really want to hear. Cytus boasts a library of over 100 songs to choose from, with musical genres ranging from dubstep, classical, R&B, rap, pop, hardcore-- among many others. Thankfully, players don't even need to put in a code to unlock all the songs as all songs are available for play from the moment the game is opened. If a player wished to play a song from Chapter 5, the game allows them to skip ahead without needing to play every song from Chapter 1 through Chapter 4.

I have been playing this game on an LG G4, so my sound quality may be different compared to an iPhone, Galaxy, or any other Android Device. However, the songs sound magnificent even without a headset. I do not possess a full Bluetooth headset so I cannot personally experience it to the fullest as of yet, but I am still enthralled with the music playing out of the speaker and bouncing off my cupped hands. Even though I do have headsets, the wire gets in the way of how I play and so I end up missing out on that part of the experience.

After finishing a song, the game will take the player to the scoresheet where it will break down how well they did based on how many notes obtained that were perfect, good, bad, or notes the player missed. It also provides the overall score of the song with 1,000,000 being the maximum score and 700,000 being needed to consider passing the song. It also gives the player a grade based on the classic "Fail, C, B, A, and S" RPG Scores. The game rewards consecutive note hits by notifying the player on the screen every 25 notes. This, sometimes, can be distracting as the player will need to hit a note either immediately upon exiting the 25th note notification or even during the notification. 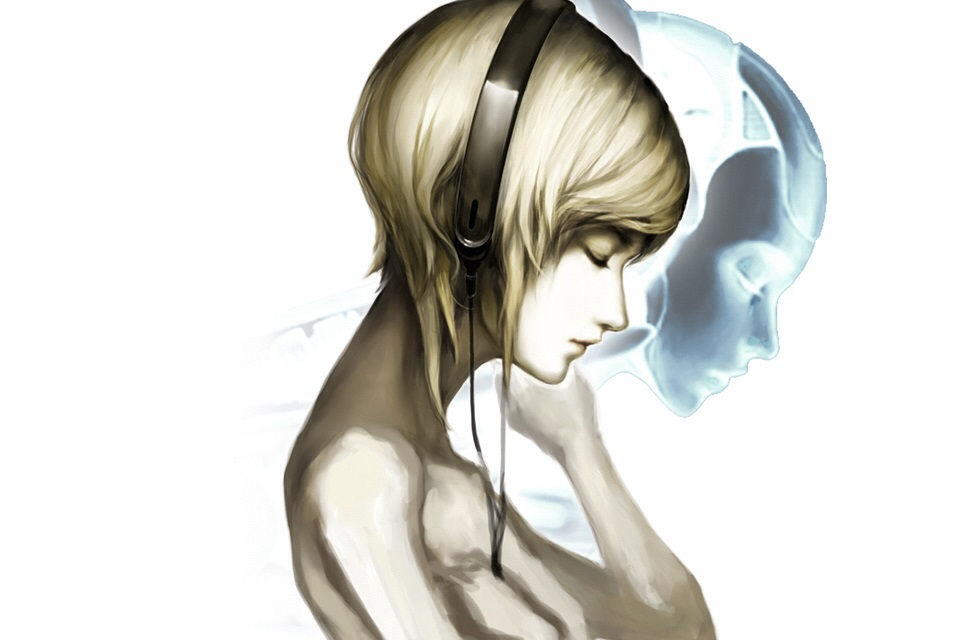 Now, while I do not have a problem with the female body being used for artistic purposes done in a tasteful way-- there may be some who do have a problem with that. The game does not feature any naked women and those that can be seen as “naked” are often covered and show only the top half of their body. The art is tasteful in regards to the image of the female body, but it is worth mentioning.

Another moral issue is there are certain songs that have a much darker image than others-- one particular song going so far as having a little girl opening a book that purple glowy stuff is obviously pouring out of. I don't wish to make a foregone conclusion to what the “purple glowy stuff” is, but it does appear to be evil and nasty in nature.

Chapter K features an image of the same little girl escaping what appears to be her home being invaded and her parents being killed. This chapter is immediately followed by the book containing the “purple glowy stuff” and so one could safely assume she turned to the “Forbidden Codex” to get vengeance for her family-- none of this is depicted in the game as after that chapter we move back to another character featured earlier on in the story.

Cytus is a well developed game for a low price. I had the free version for a while and was willing to pay $10 for it. I was amazed to find out that such an amazing game was only $1.99. I would personally say the game has no moral issues, however I realize that as a representative for CCG, I need to keep the consumer informed. Below are some pictures of the songs and more morally questionable content from the game so that you can make a more informed decision.

*The lyrics in this game are not English, so they could be cursing in non-English, but I personally doubt it.