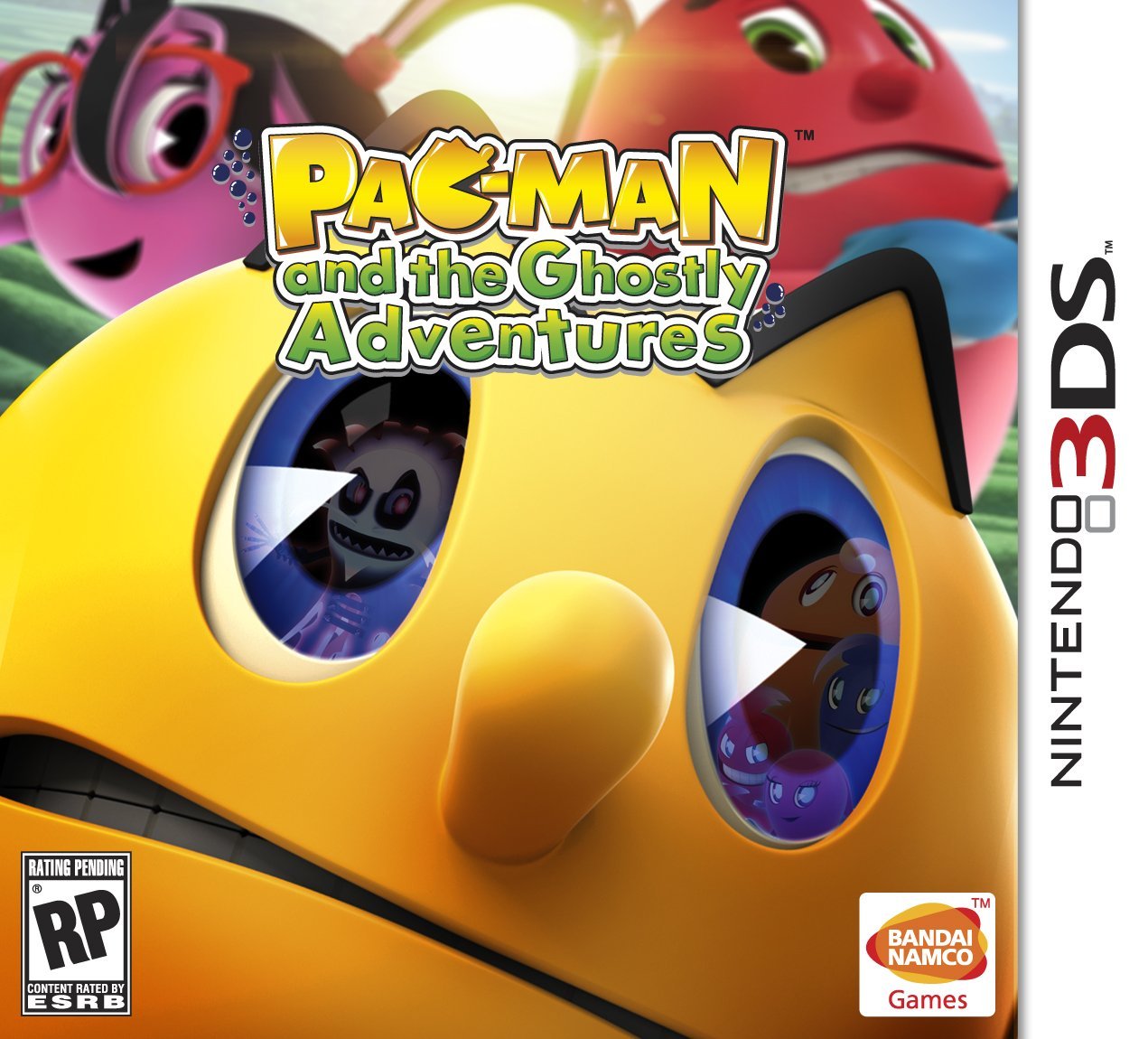 Thank you Bandai Namco for sending us this game to review!

Pac-Man and the Ghostly Adventures is a TV show on Disney and features Pac-Man and his Pac-Worlder friends Cylindria and Spiral.  While this game is available on multiple platforms, the plot and gameplay mechanics are unique in the 3DS version.  The 3DS version is a 2D platformer while the other console versions are 3D adventure games.  In this game, President Spheros notifies Sir Cumference the scientist and Pac-Man that the tree of life has been stolen by Betrayus, the Lord of the Ghosts.  Pac and his friends must get it back since this tree provides them with all of their powers.

There are seven levels that you can play in any order and the final level is unlocked after clearing those.  Each level has a power up that is required to utilize to complete it.  Pac-Man can transform into a chameleon, tornado, an invincible rock, or gain the ability to shoot fire or ice.   If you can defeat the boss at the end, you can carry your new ability to other levels. 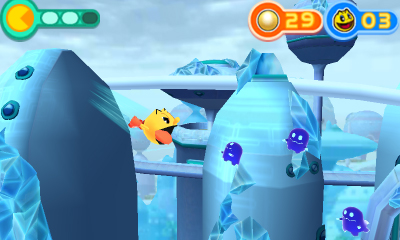 Every level has bags of fertilizer and puzzle pieces scattered throughout, not to mention plenty of pellets for Pac-man to munch on.  The fertilizer helps make Pac-man stronger by unlocking more hearts or stronger power-ups, while the pellets grant Pac-man an extra life for every one- hundred consumed.  Many of the puzzle pieces are behind obstacles that are only penetrable using special abilities, so in other words, to collect all of the pieces you have to re-visit the levels a few times each.

The levels themselves have your typical jumping puzzles found in practically every platformer known to man.  There are also ghosts of varying difficulty floating around.  While some of the ghosts can be avoided, others are required to be eaten in order for Pac-Man to move forward.  At the half-way point of every level, Pac-Man will either receive the help from a friend, or will have to bail out Sir Cumference from ghosts attacking his ship.  At the end of every level looms a terrifying boss that has a weakness to exploit.  You have to watch the boss' patterns and time your attacks or you'll be hurting.  When a boss' health is half-way gone, their attacks will get stronger so watch out!

While the boss attacks hurt, I found Pac-Man's ghost chomping to be especially disturbing.  These are not one hit knock outs found in the original Pac-Man or Mario and Sonic games.  Most of the ghosts take several chomps to finally succumb and let Pac-Man swallow them whole.  Some ghosts have to be knocked out first, and then get nibbled a few times until they're eaten.  While there is no blood, I found this game mechanic slightly awkward regardless. 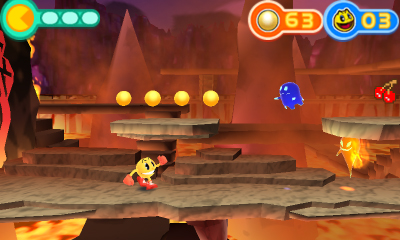 Graphically this game looks decent on the 3DS, but it's not as smooth looking at the Wii U version since the characters have jagged edges.  The 3D effects add some depth and works well for this game.  The worlds have some nice themes including an ice level, a sky level, an ancient temple level, and a retro maze level.   While there are multiple bosses, some of the maps share the same one.

I enjoyed the retro menu music and sound effects. I just wish I could turn it up a little bit, but there are no options to do so.  Headphones may come in handy for this game, especially for 3DS XL owners.  The 3DS XL's volume is considerably quieter than a regular 3DS. The voice acting in this game is minimal and consists of grunts and yeah's and the bulk of the dialogue is text only.  The background music and sound effects are good and don't seem out of place.

Both the Wii U and 3DS versions retail for $40, and the Wii U version is hands down more polished so if you own both systems, I'd opt for the Wii U version for the multiplayer aspect alone.  The 3DS version is still a solid experience and my kids enjoyed playing it whenever I wasn't.  In fact, my five year old son managed to beat a boss for me that I was struggling with...I don't know how he did it!  My kids thoroughly enjoy both Pac-Mac games and like Namco's slogan says: Pac Is Back!