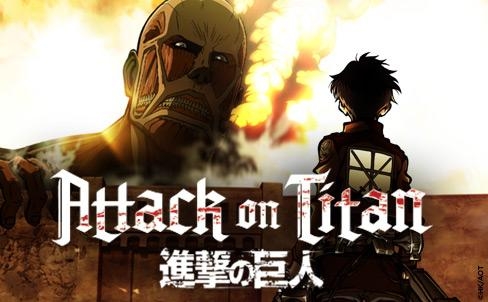 Attack on Titan: Humanity in Chains is based off of the anime series that launched in 2013.  Humanity has been living peacefully inside enclosed towns for nearly a century without incident.  Eren Jaeger and his friends Armin Arlelt and Mikasa Ackermann dream about exploring the outside world instead of being cooped up behind tall walls.  Leaving the safety of the city is discouraged unless you're a member of the Scouts, who report on the titans that have brought mankind to the brink of extinction.

After a 60 meter colossal titan breaks through the city's defenses and ushers in swarms of smaller 3-15 meter titans, the remaining population of humans takes another devastating blow. Many loved ones are lost and Eren vows to become a scout so he can take revenge on the titans.  His friends follow him and each of them has their own story and skill set they bring to the table.

Attack on Titan: Humanity in Chains is a 3D action game that retells  the stories of Eren, Mikasa, Armin,  Levi, and the ravenously hungry Sasha Braus who is known as potato girl in the anime.  At first you play as Eren as you learn the controls and combat maneuvers in the tutorials.  As the fighting and story progresses, other character story arcs will become playable as well as the world mode where up to four players can join together to bring down the mighty titans invading the cities. 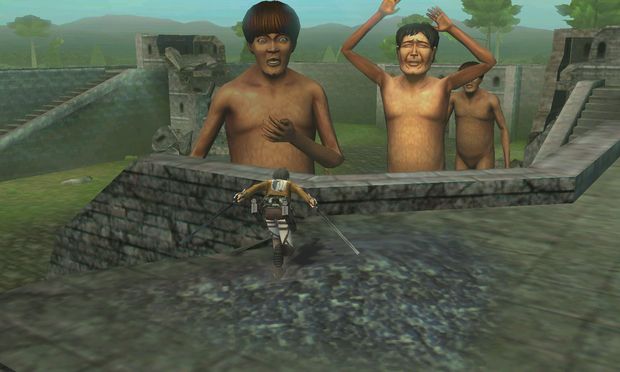 Strong Points: Fast paced action and characters that are true to the anime; multiplayer
Weak Points: Horrible camera controls; underutilized map;  no difficulty options; no localization; C stick only works on an actual circle pad pro, not on a New 3DS
Moral Warnings: You have to slit the necks of butt naked titans; blood will spray out as you do so; some language

As intimidating and ferocious as these titans are, they do have one vulnerable spot.  Their only weakness is the back of their neck.  If that is sliced deep enough with the razor sharp swords, it will prevent regeneration and  eradicate them.  Accuracy, timing and speed are all required to survive and progress in this game.

Resources are limited and you have to use your blades and gas wisely.  The gas is used for traveling at fast speeds (which is pretty cool!) and with each strike, the blades will lose their sharpness.  When titans are spotted you'll have to lock onto them and travel to them using the Y button.  Once targeted, pressing the X button will initiate the attack sequence.

To make a successful assault you have to press the x button when the attack circle is aligned with the red target circle.  If the circles are aligned, a critical attack will be made.  If not, a weaker hit is executed.  By rotating the circle pad while making the strike, a more powerful spin attack will be made.  If you're attacking from the ground, the ankles have to be struck first to bring the titan down.  Once they're at your level, it's time to go for the neck with all the power you can muster.

It's better to save some time and strike from the roof tops first. To get on the roofs you can deploy your grappling hooks to climb up Spider-Man style.  Timing is key since every level is timed and many of them have zones that have to be protected from titans overrunning them.   To complete the levels you have to bring down these naked monsters swiftly. 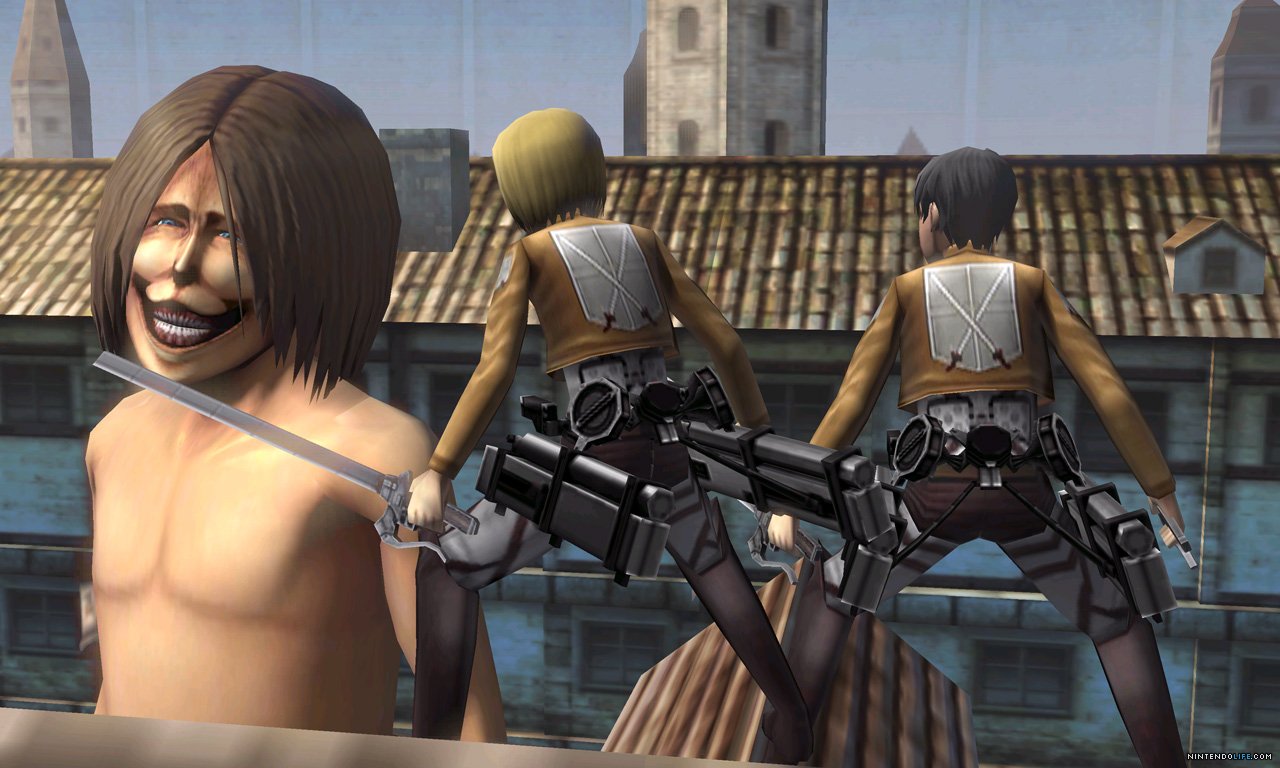 Even though the titans are naked, they don't have any reproductive organs.  In every other respect they look like humans, but bigger and with more teeth.  They also bleed when cut.  Violence and bloodshed is unavoidable in this game.  There are many cut-scenes from the anime put into this game and in those scenes you will see people being bitten in half and some cussing.  All of the voice acting is done in Japanese and this game is subtitled for the Western audience.

While the gameplay is fast, furious and true to the anime, it's not without its flaws. There is no way to scale the difficulty.  Each mission is rated on a five star scale and I was struggling with two star difficulty missions.  In some missions you are on your own with no-one to save you if captured by a titan.  Other missions have AI units that are good at saving you, but not so much when it comes down to taking down titans like humans can.  In order to unlock the multiplayer mode you have to be good at the single-player missions.  I guess this ensures that teams are not stuck with lackluster players like myself.

The controls can take a little getting used to, but the camera in this game is hard to work with and a liability when trying to take down titans in a timely fashion.  It's pretty bad when you cannot see or target a 15 meter titan standing right next to you without having to press the left trigger to refocus the camera several times.  While there is circle pad pro support in this game, it does not utilize the new 3DS' C stick and extra buttons.

Besides taking down titans, there are some fetch quests where you have to gather some items before the timer runs out.  The items are represented by glowing blue orbs which are not the easiest to see in the level, let alone nowhere to be found on the mini-map.  The mini-map does show you which titans are bigger threats by color coding them for you, so that's a plus.

While the intensity and action is accurately portrayed from the anime, Attack on Titan: Humanity in Chains has some fatal flaws that prevent fans of the show like myself from enjoying it fully.  The single-player missions are challenging and short with a ten hour campaign mode.  Multiplayer is available and reserved for those who are patient with and good enough at the single player missions.  Some gamers may not even get to unlock the multiplayer mode.  Because of that possibility, I recommend waiting for a sale before picking this title up.