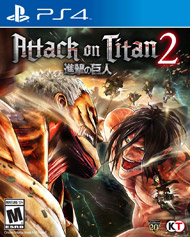 Attack on Titan 2 plays very similarly to the first game. However, instead of playing as the lead character Eren Jaeger, you’re literally a nobody who is only remembered by a journal they left behind. The gender and the name of the character are determined by the player. Your character is a 104th regimen cadet who is training alongside the characters known from the first game and the anime it’s based on. If you haven’t seen the anime, you’ll probably want to do so since the story will be spoiled for you otherwise.

The premise is that humankind is on the brink of extinction because these ginormous titans enjoy snacking on them. To protect themselves they have erected several tall walls to separate themselves from the titans. Each of the walls is named after a goddess and houses many villages and wooded land between them. In the past one hundred years there have been breaches in the walls and the humans are trying to reclaim their territory and fight back against the endless attacks from the nearby titans.

Your cadet is training for three years to go into either the military police, the garrison, or the scouts. The military police is the most sought after group since they have the least amount of danger. However, only the top 10% are allowed to join their forces. The garrison regiment is in charge of keeping order within the walls. The scouts are the ones responsible for studying and fighting the titans outside of the walls. They suffer the most casualties as a result.

Strong Points: Great (though mostly repeated) story; solid action and controls; good (Japanese) voice acting; nice visuals
Weak Points: Nobody to play alongside online
Moral Warnings: Blood and violence as you slice the napes of and dismember titans; the titans are naked but they lack genitalia; language (*ss, b*stard, d*mn); references to goddesses

Much of the story is the same as the first game in regards to the traitors among the group who have the ability to transform into titans. While Eren has the ability to do so, he is fighting for humanity instead of against them. He is not the only good titan though. The identity of the colossal and armored titans are revealed later on in this game. In fact, not much new story content is shown until you’re 75% through with the single-player campaign.

Thankfully, several new abilities are introduced to keep the game interesting despite the mostly repeated story. During your missions, you can build various bases that can replenish your supplies and attack nearby titans. Of course, the titans don’t take kindly to being attacked and will head toward these bases and attack them. There’s a wide variety of missions and sometimes you’ll get to play from a titan’s perspective. I found the missions where you have to capture the titans alive the most challenging.

At the end of a mission you’ll be graded by how quickly you completed it and by how many titans you defeated along with how many optional objectives you completed. During most of the missions a fellow cadet or two will send up a green flare indicating that they’re in danger. If you don’t get there in time to rescue them, they will die. Granted these are often no-name soldiers like yourself, but they will still be gone from the game until you complete the main story and can have a chance to go back and rescue them.

Between battles, you can walk around town and talk to your fellow squad mates. As you build up friendships with them various cutscenes will unlock. Along with funny sequences, you’ll also get to unlock attributes and abilities when your friendships level up. Completing scouting missions will bolster your popularity as well. Another benefit to friendships is unlocking your buddies as playable characters in Another Mode/multiplayer portion of the game. While Another Mode can be played solo, it’s the place to be to arrange multiplayer campaigns and battles. Sadly, I couldn’t find anyone to play alongside or battle with online. 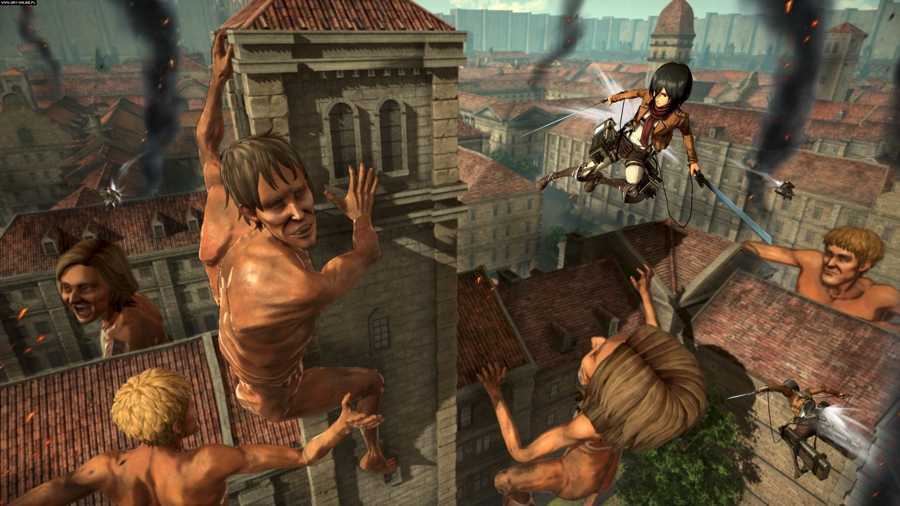 Though the single-player campaign is a bit short and can be completed in a little over ten hours, there is still plenty to do after completing the main story. I like how you can continue the story after the credits roll. Along with rescuing people you let die previously, you can try again at some conversations that didn’t go correctly the first time around. An inferno Mode unlocks after completing the story and this mode doesn’t hold your hand or give you any mercy.

Aside from the new modes and features, everything else is on par with the first game. The cell shaded graphics are excellent and the titans are pretty detailed and hideous in appearance. Though gore can be minimized, there are still splashes of blood in the cutscenes. It’s kind of hard to avoid bloodshed when you’re required to slice into and remove appendages from the titans.

The Japanese voice acting is good as well and I believe the voice actors carried over from the previous game. There’s a fair amount of cussing and it’s sub titled for those who haven’t learned the naughty Japanese words yet.

In the end, I’m not sure if this game justifies the $60 price tag since most of the story is rehashed. It’s still fun to play and there is plenty of things to do and new content to see. If you really enjoy the anime and the first game, you’ll probably enjoy this one as well. If you’re looking for multiplayer fun, you’ll be disappointed here.