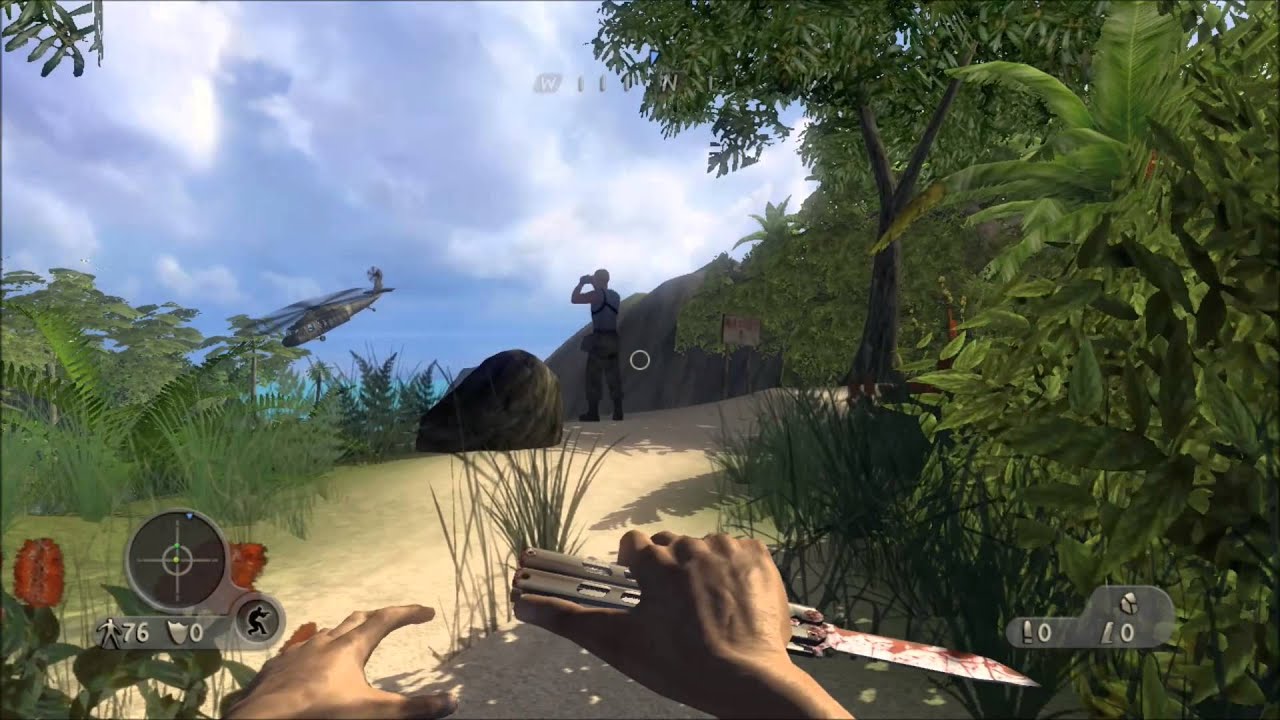 *You're Jack Carver, stranded on a remote tropical island. A legion of elite mercenaries equipped with a military stockpile is rapidly closing in. Outmanned and outgunned, your survival won't come easy. Only with skill, instincts and ingenuity can you conquer the enemy and make it out alive. *From IGN.com Far Cry Instincts is the second game in the Far Cry first person shooter series set on a tropical island that started on the PC and made it\'s way to Xbox. It kept the same basic gameplay aspects of the PC game but added new dimensions by giving Jack Carver (the user-controlled character) new powers called "Feral Instincts." Throughout the game, Jack will be able to run insane speeds, leap over caverns, track the scent of his enemies and terrorize the opposition with a deadly melee attack. All of these add up to one intense shooter with many twists and turns...

Right from the get-go, Far Cry Instincts pulls no punches in terms of game play. The first person shooter aspect is certainly well integrated into the tropical theme and even though the scenery looks light and calm, the game is anything but. The game begins with a cut scene of Jack Carver\'s boat being gunned down by a helicopter, you then swim to the island and begin training. You go through the basic button placement and movement training and continue on gradually to weapon training. The training commences in such a way that it advances the storyline while you learn to play. After training you begin to realize the intensity of the predator vs. prey-type of game play Far Cry Instincts sets up. You can move quietly through the dense jungle to avoid detection, you can set traps and lure your enemies towards them, and you can even roll onto your back to shoot your enemies through the floorboards of docks and cabins. As for the enemies, you will mainly be hunting down mercenaries set on the island to guard an experiment going on by a mad scientist who seems to be bent on filling the world with mutant creatures, some of which you will be fighting later on in the game. You will fight on the beach, in the jungle, in the dense rain forest (at night), in caves, in mines, research facilities etc... All of these add to the variety and drag you into the game. The targeting reticule is rather large, but adds to the arcade-feel of the shootouts, and don\'t worry, there are major shootouts. You are armed with the regular variety of weapons (pistols, assault rifles, sniper rifles, rocket launchers etc...) but they are all wonderfully detailed and have a great feel to them. The game also carries a hefty online/split-screen/system-link multiplayer portion that includes the usual deathmatch/capture the flag (or steal the sample in this case), but also includes a predator mode where one player is given all the predator powers and the opposing team must reach the other side of the map to activate a beacon. With the predator following their scent and unleashing brutal clawing attacks, it may be difficult, but it\'s definitely fun. It should also be noted that the game includes an extremely expansive map-maker program that allows the player to make a fully customizable map for all the multiplayer modes, this is absolutely incredible and the best map-making feature in an FPS I\'ve seen so far.

Some of the best the Xbox has to offer. The foliage is incredible and the water effects are nothing short of stunning. It brings a smile to my face to see the painstaking detail in every corner of the Far Cry Instincts island. For example: When you break the surface of the water, your eyes will still have water in them and the screen will appear blurry for a few seconds. It\'s in details like this that make the graphics truly spectacular. Although the graphics are astounding there are a few minor problems, most notably is the pop-in. For the first hour of the game I found it to be a little distracting, even irritating, but considering the scope and detail of this Xbox game, it is understandable. The framerate stays at a steady 30fps even in the heated battles. Another problem is the blood, which I also find a little distracting. The problem is that there\'s too much on bullet impact. When you shoot someone there\'s an explosion of clumped red balls that looks like the poor guy was shot with an artillery shell. It\'s just a little too much, but when you\'re shooting at more than one guy you don\'t stand around long enough to notice.

No complaints here at all. The ambient sounds are incredible and add to the tropical "paradise" feel of the game. I have my Xbox hooked up to a 5.1 surround sound system so hearing the mercenaries talk a few feet away and brushing through the ferns and bushes sounds perfect. The gun sounds are great, but that\'s expected for an FPS of this quality. Also later on in the game you will encounter strange creatures which exude all the sounds that you\'d think a mutant creature would. One noteworthy area is the sound of feet walking across wooden planks. It sounds like a small facet of the sound category, but it is so realistic that it amazed me whenever I ran across docks or in island cabanas. Jack\'s heavy breathing while running was also very realistic.

I have not encountered any bugs during my time with Far Cry Instincts. From the single-player story mode to the map-making feature, the game was completely bug-free.

The controls were pretty spot-on for an FPS. One problem did have was controlling vehicles. Since you supposedly have one hand on the wheel (or handlebar) and your other hand is holding a gun, it\'s easy to go off center and start driving in a slightly different direction. It\'s also hard to shoot while you drive as I found the bullets warp to the right a little and never seem to hit my target properly even if the reticule is showing a hit. The menus and HUD were all perfectly accessible and the load times weren\'t as bad as some reviews made them out to be, though they did take you out from the action once in a while (a good thing maybe?).

-Killing people in self-defense (-4) -Blood sprays on the walls and everywhere else (-2.5) -Body parts can be visually unattached (-1.5) OK, this is where it gets sketchy. This game is violent. Although you are killing these mercenaries and creatures in self-defense, it doesn\'t make it any less impacting. You hear the mercenaries screams as they are riddled with bullets and they\'re blood sprays (or kind of globs) into the air. Although the blood doesn\'t stay in normal combat, there are areas of the game in which creatures have just attacked small bands of mercs and there\'s blood everywhere. On their faces, on the ground, splattered on walls and rocks. Also during these times there are often legs detached and torsos spread over boulders with their mouths agape. Some of these scenes can be extremely graphic and disturbing even though you did not commit these violent acts yourself. Also with your melee attacks: At first you have a knife which you use to silently sneak up behind a merc and stab him in the back with extremely bloody results, and later on you have a brutal slash attack in which the merc goes flying while he lets loose a girlish scream also with bloody results.

-Swear words found in an R-rated movie are used in the game (-5) -God\'s name in vein is used throughout the game (-5) Why Ubisoft why?! This seems to be the growing trend in videogames lately, I\'d be hard-pressed to find a game of this calibur without a single curse in it. Unfortunately for Far Cry Instincts it\'s not a single curse, it\'s many. Jack drops the F-Bomb at least a dozen times throughout the course of the game and it\'s not only in cutscenes either, it\'s during firefights so you can\'t skip it. He mainly uses it if an alarm is set or his new feral instincts act up. All in all there are at least two dozen "F" words, a dozen "S" words, many uses of "G--D---" and a smattering of mild profanities. These are mainly said by Jack and random mercenaries who scream profanities during heated battles. (I could only take off 5 marks for those two categories, but I thought I needed to mention the misuses of God\'s name).

I can fortunately say that the game\'s saving grace in the appropriateness section is it\'s lack of sexual content. There is a woman in the game that Jack transported to the island and she appears to be wearing a bikini, but she is only seen briefly and there are no extreme details to make out (it looks like she\'s wearing an open jacket too that covers her body).

There appears to be no occultic and/or supernatural elements to this game. The mad scientists conducted experiments to create mutant creatures, so they are not demons or any magical beasts. The feral instincts are also just an experiment so they contain no magical significance.

There are really no regular authority figures present to rebel against. The mercenaries are just that, mercenaries. They are all protecting a mad scientist and his experiments, and you are killing them in self-defense as you try to survive through this ordeal.

I would highly recommend this intense first person shooter to mature players. The appropriateness score may be a little higher than, well, appropriate, but all in all it is an extremely well made shooter that is also extremely mature.