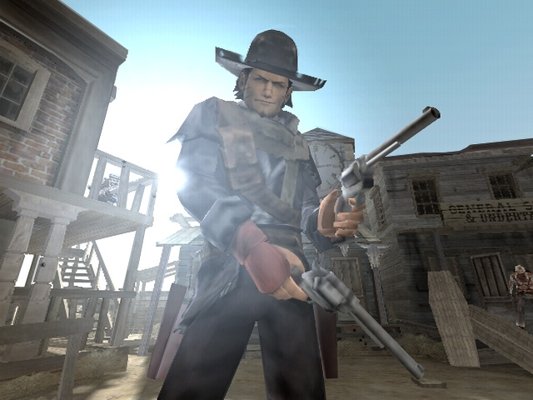 Imagine an old Clint Eastwood spaghetti western, because that’s what the story feels like. In the 1800s a father is reunited with his wife and son, the three-month expedition for gold has been a success. He greets his family bearing gifts and the news of their wealth. All their problems would soon be over, they would never endure hardships again. The joyous reunion ends abruptly when renegades attack the homestead with a hail of bullets. The father and son’s fight is valiant, but in vain. The son is the only one left alive as carnage and fire engulf what was once his home. His father’s pistol lies in a bed of burning embers. Without thought he grabs the weapon and is overcome with intense pain. The pistol drops to the ground and he opens his hand to reveal the mark of the pistol grip…the scorpion is seared into his flesh. Many years later the son (Red) has grown up to be a bounty hunter, hunting down convicts for money. He is also searching the plains of the west for those responsible for his parents’ murder. (from the game manual) If anyone have seen Clint Eastwood’s movie ‘The Outlaw Josey Wales’ it has a very similar story. I personally think that this game might be a prequel to Clint’s legendary ‘Man with No Name’ trilogy.

This is a third person shooter. You play most of the time as Red, the bounty hunter. The game play is very fun, kind of hard to get into though. As you progress through the game you unlock pages in Red’s journal, which access via the main menu. Seeing Red’s personal thoughts and information on wanted bounties is rewarding. Getting into quick draws is fun too, just like in the old west movies. Two characters face each other with their hands ready to draw. You have to work the controls to draw first and fire. The game play does become repetitive after a while though. The game has multiple difficulties just like most games, so it can be replayed.

Graphics of clothing and environments are richly detailed and sometimes there are even dust storms that come through towns. The odd part is the faces. The faces look kind of like cartoons, and even though lips do move when characters talk, it sort of contorts their entire face. It is kind of weird to watch, but its okay.

Good voice acting and sound effects fill this western adventure. The background music honestly sounds like something out of Sergio Leone’s (his directed ‘The Good, The Bad, & The Ugly’) famous westerns. It’s very fun to listen to.

I never had the game freeze or crash on me.

The controls are odd in this game. You have to pull the left trigger to un-holster your weapon, and pull the right to fire. This can be very annoying towards the beginning of the game. Frustration galore when during a gunfight you pull the right trigger and nothing happens. You can catch on pretty quick though.

This game is very violent and bloody. When you kill an enemy, blood sprays all over the ground and in the air (especially when you shoot an enemy in the head or neck). Thankfully the bodies disappear. The whole game revolves around a quest for revenge. One boss character that you fight is from the circus and uses a borderline magic potion to teleport all around the arena while you try to shoot him. During a bar fight sequence if you enter one of the rooms you will find two women, clearly naked, sharing a bathtub. Thankfully all the bubbles cover anything explicit, and oddly you can buy health from the women (I think the game designers added them in as a joke). Thankfully there is no bad language in this game and that is one relieving quality. This game was directed at mid to older teens and is definitely not for anyone younger than 14.