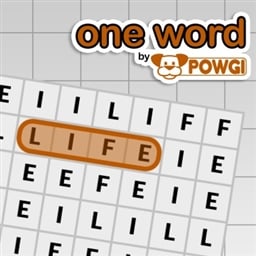 One Word by POWGI is a word-search game with a stark difference: the word in question is hidden within a mess of letters that are a part of that word. Each puzzle is comprised of a set of different words to find that complete a quote. Each word is in chronological order: the first word of the quote is solved first, the second word is solved second, and so on. The puzzles are identified by the name of the person who said the quote.

There are 150 puzzles to play and complete, and if desired, the user can always go back and re-complete a puzzle. Nothing changes in the actual placement of the letters. The people who said the quotes are from extremely varied backgrounds, so the player will find quotes from Malcolm X and George Orwell and J. R. R. Tolkien and everyone in between (except for C.S. Lewis, apparently). Even Jerry Seinfeld made it onto the list.

There were a few typos in the quote sources’ names. J. R. R. Tolkien’s name was spelled Tolkein, and Jerry Seinfeld’s last name was shown as Seinfled. 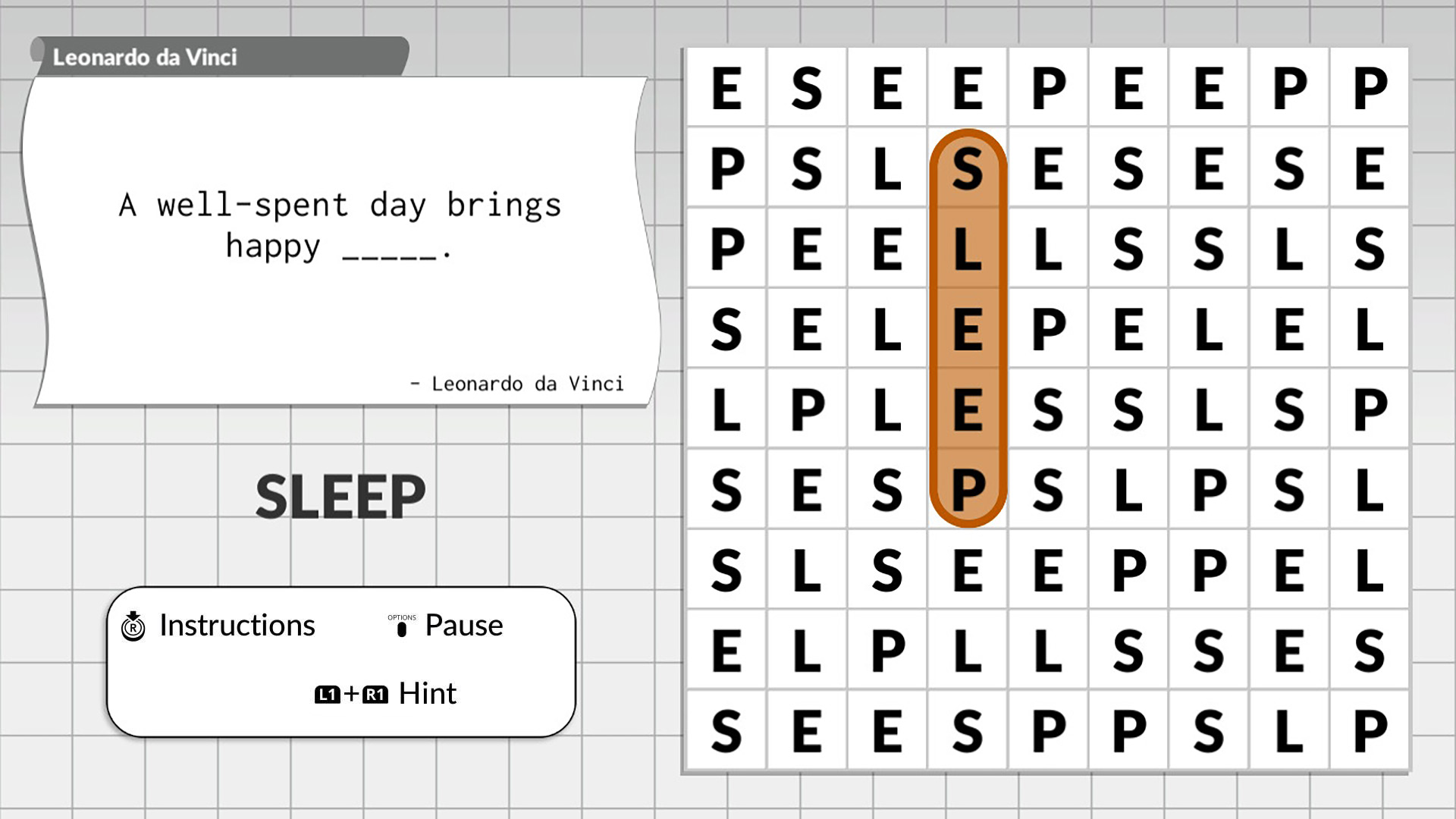 Strong Points: 150 puzzles; catchy and fitting music; easy controls; considerable difficulty; easily accessible hints
Weak Points: No ability to adjust the difficulty of the puzzles; typos in the names of some of those who said the quotes
Moral Warnings: Some quotes are from figures with questionable roles in history (e.g. Hitler, Putin) or well-renowned atheists

The UI of the game is extremely simple. The pause menu in-game only has three buttons: one to resume, one to return to the main menu (which is the same menu as the puzzle selector), and one to turn the background music off. When the user is solving a puzzle, they can press and hold the A button (on Xbox) and move the joystick to select the letters they wish to highlight as the word that they are looking for. There is also a few listed options on buttons to press in order to access things like the instructions, the pause menu, and a hint (which will reveal the word that they need to look for). One hint is available for each word that the player has to find. POWGI was even nice enough to include a tutorial puzzle for the user to complete in order for them to get a handle on the game.

Many of the puzzles are considerably difficult, and even with the hints, I had a lot of trouble. (I will confess that I used many, many hints in attempting to solve the puzzles.) Usually, it took five to eight minutes for me to complete a quote. Words that were less than three letters did not get dedicated puzzles for searching, as they would have been far too easy. There were no options to increase or decrease difficulty, which was a little disappointing, because there are some who would find this title impossible and still others who would find it much too simple. However, it was fine for me, providing a nice challenge without being frustratingly difficult. 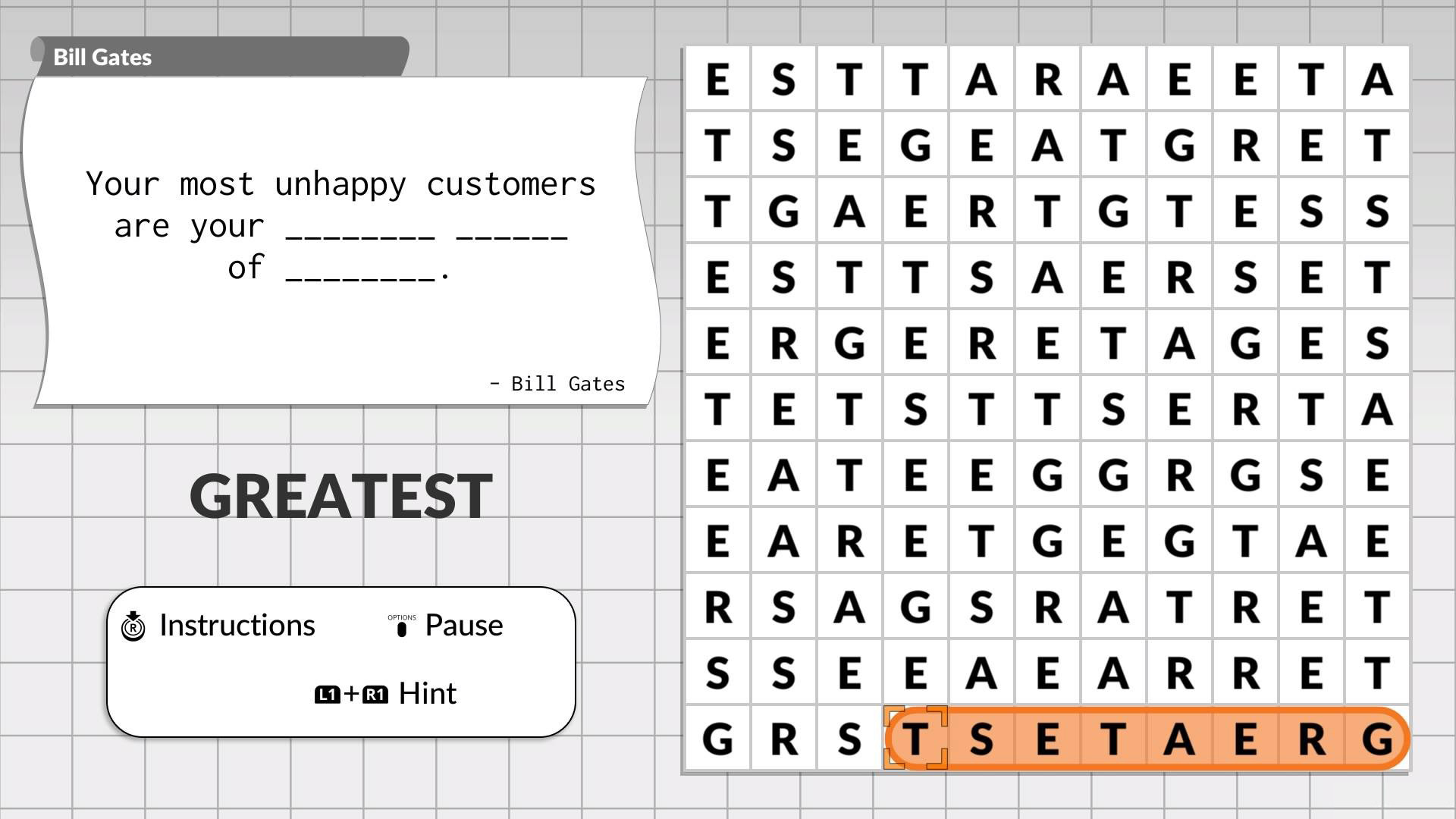 The background music was simple and catchy, but also varied enough to not become annoying. I particularly enjoyed the soundtrack, as it was peppy, but didn’t detract from my ability to focus on the task at hand. The provided ability to turn the music off was also a nice touch, in case I did happen to find it annoying.

Some of the quote sources that had puzzles dedicated to them had more than one. There were also a few that had questionable places in history. Adolf Hitler was one of the puzzle options, for example. Many renowned atheists were in there as well, including Bill Gates, Charles Darwin, and Stephen Hawking. There are a few notable Christian figures as well, including Thomas Aquinas, but not many. Even a Pope made his way into the list. The quotes themselves are perfectly family-friendly, and generally send wholesome messages.

Overall, I enjoyed this game, even though it’s not in my normal genre. It was a welcome challenge, and it’s clearly designed for all ages, which is also nice. The varying viewpoints was a nice touch, and made things a little more interesting, but in my opinion there was a bit of an imbalance. Otherwise, this is a great game to give to a friend or family member who enjoys puzzles and wants something new to train their brain.