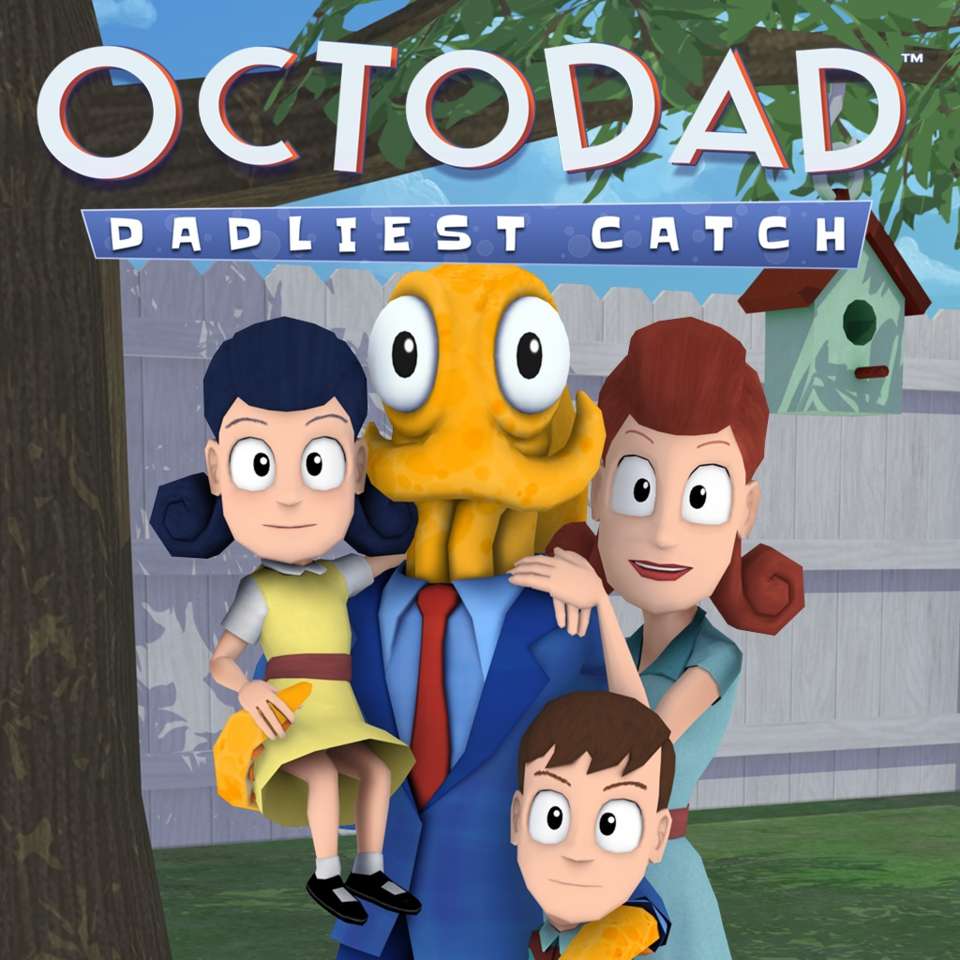 Thank you Young Horses Inc. for sending us this game to review!

Octodad is a free game that was made by eighteen students at DePaul University.  Eight of those students went on to form Young Horses Inc. and release its sequel, Octodad: Dadliest Catch, after a successful Kickstarter campaign.  The silly premise remains the same where an octopus is masquerading as a suburban father of two.  Simple tasks like making coffee and buying groceries prove to be challenging with his many boneless limbs.

The controls are rather awkward and take some getting used to.  The legs are controlled with the triggers and joysticks.  The arms use the joysticks by themselves.  Grabbing onto, flinging, stealing, and moving objects is done via the A button. For an added challenge multiple controllers can be used to control Octodad in the co-op mode.

Besides co-op, there’s the main story and free play mode.  Once levels are completed in the story mode, they become available in free play.  The story levels have hidden neckties in them that are not attainable in the free play mode.   The main story is only a couple hours long, but could take novice gamers longer if they’re not acclimating to the drunken control style. 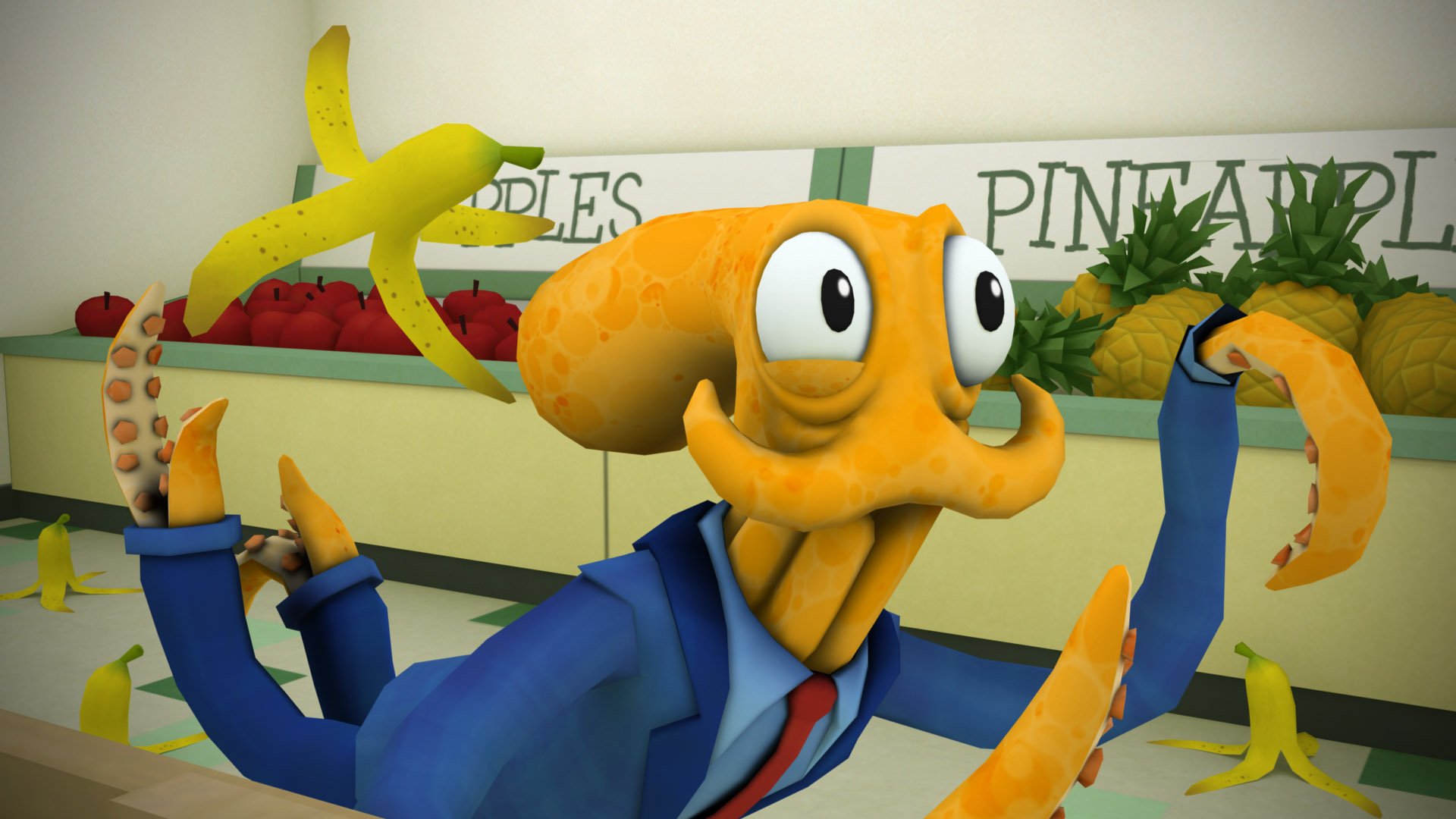 Octodad: Dadliest Catch begins with Scarlett waiting at the altar for her soon to be husband to finish getting ready.  The church is rather unique with its Cthulhu style stain glassed windows.   Why isn’t it a Christian church you ask?  I doubt they would approve of a human/animal union as verses like Exodus 22:19 prohibit such acts.  Since the main goal is for Octodad to fool everyone that he’s a human, there’s a good chance his wife to be doesn’t realize that he’s not one either. Regardless of the circumstances, two kids result from this marriage and the backstory isn’t revealed until later in the game.

After the tutorial/wedding level is completed, the family is introduced along with Octodad’s nemesis, the Chef who wants to serve him on a platter.    Octodad must complete several chores/objectives to move the story forward.   There are eleven areas plus an unlockable level if Octodad manages to flush himself down a toilet.

Some of the levels, like the aquarium, require stealth to complete them.    The marine biologists at the aquarium are experts when it comes to fish so Octodad has to stay out of their line of sight.  Another instance requiring stealth is stealing the last box of kid’s cereal from a lady’s shopping cart without her noticing. 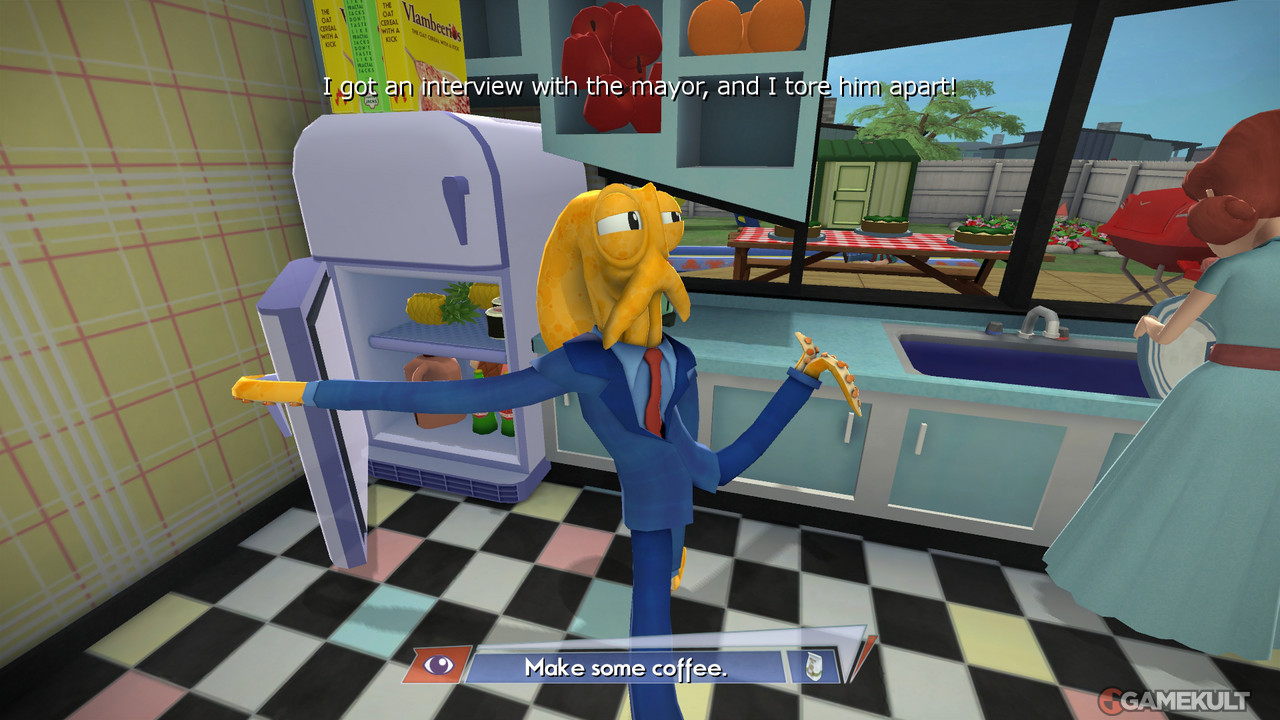 Stealing is required in some areas and in others it’s optional.  One of the hidden ties is in a vending machine and Octodad can reach one of his tentacles inside of it to snag it without paying.  Most of the stuff is paid for in this game and in the grocery store Octodad gets to ring up the items he worked hard to get.

Most levels let you take your time in completing them, but there are some timed instances.  Octodad has to outrun the chef at the grocery store and a shark in the aquarium.  If he is too slow, he can actually die.  The death scenes are pretty tame with purple ink splashing on the screen.

The levels are very colorful and nicely detailed.  While the controls are wonky, there is some leeway and grace when it comes to lining up things “close enough” to register correctly.  Despite the assistance, I could only play this game in small doses as the controls would often frustrate me before long.  Some areas got me stumped and I found some helpful walkthroughs online to set me back on course.

I like the theme song and the dialogue in this game.  The humor is quite clever and fits in well with the over the top silliness theme.  There is some potty humor in the bathroom stall where a guy in the stall was regretting eating some free sushi.   He wanted his wife to be notified of his pending tardiness as he’s expecting to pull an all-nighter in the loo.

If you like silly games with wonky controls like I Am Bread or Surgeon Simulator, then Octodad or Octodad: Dadliest Catch is worth checking out.  The controller support is pretty good considering the drunken style of the controls in the first place.  Other than the goofy controls and minor moral issues, Octodad: Dadliest Catch is a charming game that is bound to bring out some laughs while raising your blood pressure a tad.