Fundamentally, the rhythm genre hasn’t changed much since its inception. From the earliest days of the genre, to its evolution in Japan with Konami’s “Bemani” games, like Dance Dance Revolution and Guitar Freaks, to the eventual stateside success of Harmonix with Guitar Hero, there hasn’t been much evolution, just iteration.

Harmonix’s Rock Band 3 aims to change all of that.

At its core, RB3 doesn’t do much new. Scrolling gems come down a fret board, and the player has to hit them, using a guitar or drum controller (or a new instrument, the keyboard). This focuses on rhythm instead of other aspects of music theory, which is problematic when seeing the game as anything but a game. Singers attempt to match pitch with a microphone, and this is much more successful in teaching the player how to become a better singer.

This is more or less how it’s been with every game in the genre. So Harmonix set about trying to enable the game to teach players how to play their instrument. What they came up with was Pro mode. Using a “Guitar Trainer,” “Key Trainer,” or “Drum Trainer,” players take virtual lessons, which attempt to teach aspects of music theory to the player.

Even with experience on one of the instruments, these take practice; they’re essentially teaching a new form of notation for all the instruments. This translates to even more practice on the song end, but it sees a real result: songs are taught to the player in a real and substantial way that can be translated to a real instrument. 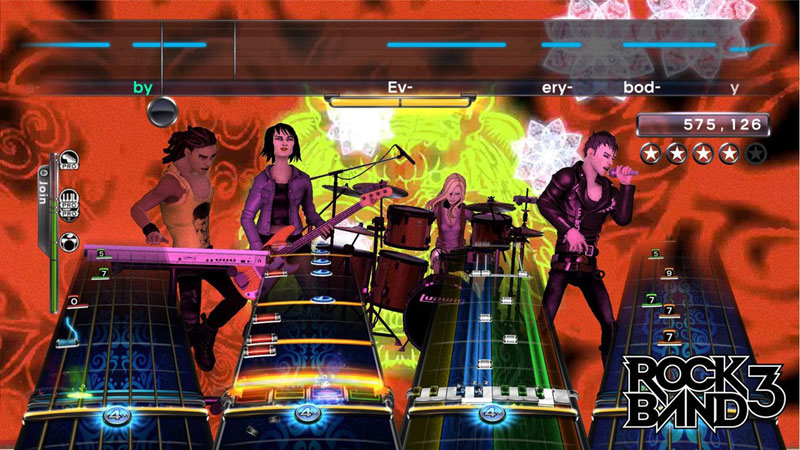 Weak Points: New instruments are pricey; steep learning curve for Pro mode, which might prevent players from committing to it; game is still technically four player, though it allows for seven people to play along.

Moral Warnings: Some suggestive elements are featured in the clothing options, particularly for female characters (guys aren\'t spared the rod on this one); some songs contain lyrics that might offend some, though most profanities are edited out; a couple of the load screens and cutscenes show the band in a bar and at a party, with some minor alcohol and drinking references.

The problem with Pro mode is that it features a barrier of entry: The drum addition (cymbals that are sold separately and added to the Rock Band 2-version drum kit), top out at around $40, and the other instruments are even more expensive. But they’re also very cool, with a $150, 102-button guitar controller, an even more expensive Squier guitar that works as a game controller, and a keyboard with two fully playable octaves. All of the instruments can be hooked up to a MIDI-converter, so they actually function as working instruments.

And what about the rest of the game? Instead of the rigidity of RB2’s Tour mode, players now create a band and a character (and customize the band and the character), and use that band and character in every mode. Consistency is key here, so that no matter how you play, you’re always progressing in the game.

This goes for Road Challenges, which are essentially Tour mode redesigned, as well. Instead of a sprawling world map, filled to the brim with venues and songs (and repetition, especially without an extensive downloadable content [DLC] library), players go on short tours with their bandmates, following a slight narrative progression that’s illustrated by short, comic videos.

Career mode and Quickplay make comebacks, though there aren’t really any new bells or whistles there. To keep things involving and moving at a clip, Harmonix included goals, which add to your fans and reputation. This way, you can make progress with your band’s fame and fanbase by simply playing Career, or hopping into Quickplay for a couple of songs.

Songs can now be sorted far more extensively, and reviewed so that the songs that you aren’t exactly fond of don’t come up as often. The game ships with 83 songs, but that list is slight compared to the amount of content that you can bring over from other games (RB1, RB2, Lego Rock Band and Green Day Rock Band all allow their setlists to be transferred over, less three or four songs in RB1 and RB2 due to licensing rights), as well as DLC.

And the on-disc song list here is solid; in fact, it’s probably the best yet featured in a Rock Band game. Where the previous game skewed more towards metal, RB3 tends more towards pop (because of the addition of the keyboard), but that doesn’t mean that difficulty is lacking. In fact, songs by Chicago and Yes and Lynyrd Skynyrd take prominent places on the soundtrack, simply because of the difficulty that the songs present. Many of the songs tend towards rock from the 80s, so glam metal bands like Whitesnake and Night Ranger are featured pretty prominently, as are tracks from Foreigner and Ozzy Osbourne. 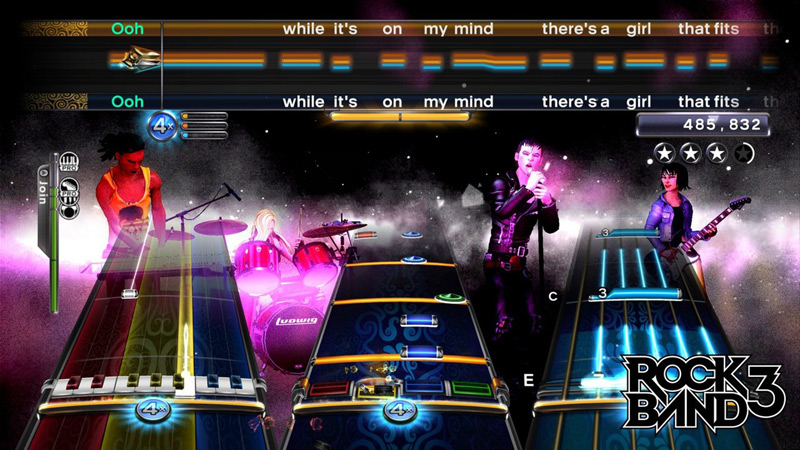 More exciting for me (given my musical sensibilities) is that indie rock is given its due here. Early stuff from Metric (“Combat Baby”), as well as more recent releases by Tegan and Sara (“The Con”), Rilo Kelly (“Portions for Foxes”) and Pretty Girls Make Graves (“Something Bigger, Something Brighter”), alongside classic stuff from The Doors, Elton John and Jimi Hendrix makes the soundtrack one with something for everyone on it. (Oh, and did I forget to mention John Lennon is on the soundtrack? Because he is.)

The visuals aren’t mindblowing, but look good. Character models aren’t as cartoony, but do maintain their same stylized looks. Animation is gorgeous, and characters interact on stage as they should, though the game still doesn’t animate between transitions. A character might be on their knees, nailing a solo in one shot, and a second later they’re across the stage, jumping up and down. It’s jarring, but you’re not likely to be looking at the animations anyway, especially not on harder difficulties.

One of the more visually disruptive aspects of the previous games, the load screens, are now almost completely gone. Instead of waiting for a song to load (as has been the case with every music game ever), you now see characters getting to the venue, or setting up. It adds to the sense of immersion in what this technically is: a band simulation, instead of a guitar game.

The core gameplay – beyond the addition of the aforementioned Pro mode – hasn’t changed in any drastic way. This is the same Rock Band, even as it’s far more polished and streamlined. It’s designed for parties and ease of use: The “Overshell” allows you to change instruments and difficulties and the little options in the game without ever going into a separate menu. All you have to do is hit the “Start” button on any screen, and things open up, because the Overshell is always present.

The monetary system from past games has been completely removed. Players unlock new clothing, instruments, accessories and more by completing challenges, which are sometimes tied to achievements or trophies. If you’ve transferred the content from previous games over, completing the setlists from those games is considered a “challenge,” but so is doing something like hitting a certain percentage in a certain song, or playing a certain number of songs from a certain band. Many of these challenges are completed during the course of the game; the ones that you have to go out of your way for present further challenge, and are basically there for completionists. 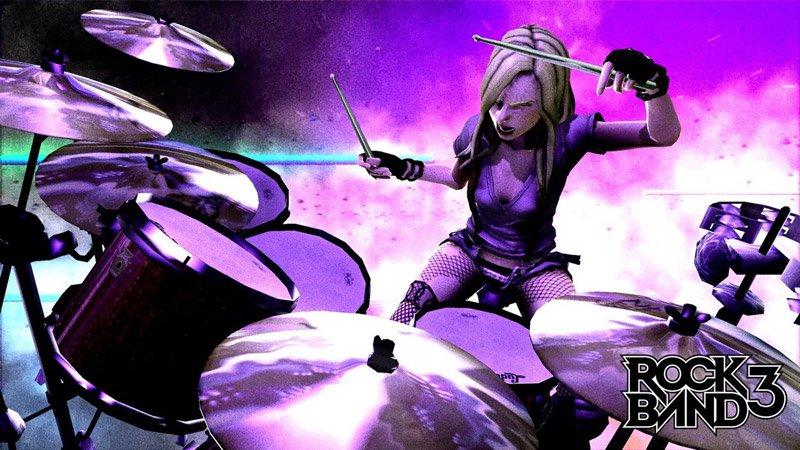 I ran into some small bugs during my playthrough, such as characters glitching through one another. The new instruments (of which I’ve only had hands-on time with the keys) seem solid, and the keys managed to take some beating. They also feel very similar to a mid-range organ’s keys, which is saying something for the fidelity and quality of the instrument. Also worth noting is that even though the game touts itself as allowing for seven players in any mode, this isn\'t exactly true. Only four are ever featured on stage, and if keys are included, it\'ll bump the bassist off-stage. Anyone off-stage doesn\'t actually contribute to the band\'s score. It ends up being a pretty significant disappointment, if you\'re used to grabbing as many players as possible and playing until dawn breaks.

Despite this, or perhaps in spite of this, Rock Band 3 is the most playable, compelling music game to come out since, well, the first Guitar Hero. Everything here is an evolution of an established concept from the genre. Harmonix has perfected its craft here, and though there’s further places they can take the genre, with Rock Band 3, they don’t need to.

With it, they’ve crafted their masterpiece.

Rock Band 3 was purchased at Gamestop, bundled with the keyboard, for $129.99. Before reviewing, time was spent in each play mode and in multiplayer, with time spent on each instrument. Pro Mode was also played pretty extensively, though the Pro Guitar was not available as of this writing for review.

Violence: No violence was featured in the game, and none noted by the ESRB.

Language: A few songs contain some profanity, most of which is censored out. Of particular note are "Oh My God," by Ida Maria (the chorus repeats the title over and over), and "This B-----d\'s Life," by the Swinging Utters, which also has a couple instances of "b-----d" spoken in the song. Another song, "The Beast and the Harlot," by Avenged Sevenfold, has suggestive lyrics based on the Book of Revelation; "Centerfold," by the J. Geils Band, describes a man leafing through a pornographic magazine, and finding a former classmate in the pages.

Nudity/Sexuality: More than a few suggestive outfits are available for players to select, especially for those who choose to create a female character. Outfits typically accentuate both breasts and legs, and can include underwear. Male characters also have suggestive outfits to choose from, the most notable of which are a pair of bottomless chaps with a tuxedo tail (which covers up most of - but not all - of the revealed regions).

Supernatural: Some minor supernatural references are in Rock Band 3, most of which are in the instruments, which are goat\'s head guitar and bass instruments.

Other: There are a couple of animated scenes featuring implied drinking, and brief scenes in a bar and at a party.