Arguably speaking, the most memorable scene in Francis Ford Coppola’s The Godfather happens towards the end of the film, where Michael Corleone witnesses his godson’s christening. When the priest asks if the child renounces Satan, Michael answers for him: “I do,” he says. At the same time, the heads of families that rival the Corleones are executed, at Michael’s order.

The juxtaposition of the holy and the unholy, as shown in The Godfather, the mob film which most influences Mafia 2, is exactly the problem with the game. In it, you have a beautifully imagined world, set against an almost entirely linear story, and gorgeous graphics, with serious flaws in animation and collision detection. It is a game that works best when it’s not trying to be as violent as it can be, yet for some reason loads the back end of the entire experience with boring, frustrating, combat-heavy moments, none of which actually add to the game itself.

Mafia 2 is a wonderful, fatally flawed game. Its sense of humor and its supporting cast are both absolutely compelling. And its story, while decent enough, ends up being one of the low points of the game. Most of its memorable sequences are ripped straight out of the most famous Mafia films around. So are its characters, except maybe Vito, who doesn’t seem to have much of a personality. 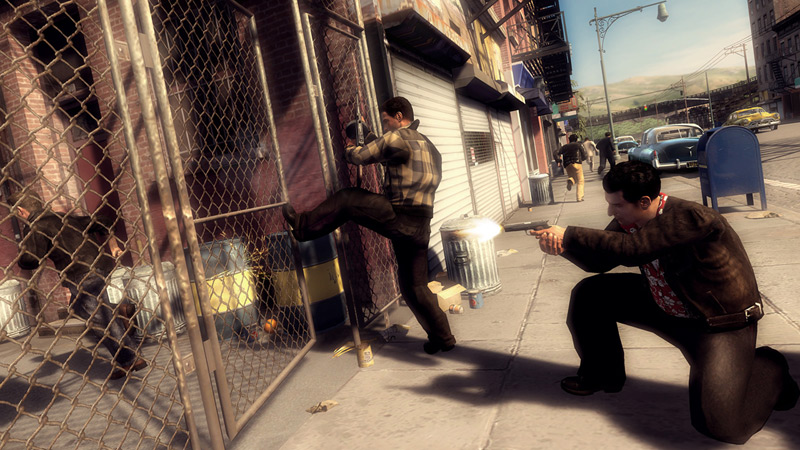 Strong Points: Gorgeous graphics, from the world to the characters to the animations; compelling plot; mostly excellent characterizations

Weak Points: Vito is a dud as a main character; the game does nothing new, ever; linear to a fault; big world to play in, but it feels dead; gunplay is broken and feels completely outdated; there\'s pretty much nothing to do outside of the main story.

Our malleable hero, Vito, is pushed around by others, and hardly ever shows a conscience or thought of his own. Where is the moral conflict from this war hero, after mowing down hundreds and hundreds of people, from World War 2 to the streets of Empire Bay? Where is the remorse for carving open a throat, or blowing a man’s head off? At the beginning of the game, Vito is little more than a hooligan returned from war. His mother cries and comments over the return of her “sweet Vito,” who by this point is quite comfortable doing terrible things, and doing them repeatedly.

That’s really the main problem I have with Mafia 2. Compared to recent protagonists from similar games, Vito Scaletta is a blank slate, with hardly a word in protest to the vile things that he does. He is, essentially, a regression, and that’s really unfortunate.

What is fortunate, however, is that the supporting characters in Mafia 2 are mostly very likeable, even as they’re vile and basically depraved. They’re stereotypes, and if you’ve seen one mob flick, you’ve probably met all of them at one point or another (Joe in particular seems to be mostly based on Joe Pesci’s character in Goodfellas). This ends up being more of a boon than anything else, resulting in a (mostly) clever homage to the fiction that’s come before.

It would have been nice to see what developer 2K Czech could have done with their own original characters, but the portraits that they paint here – specifically in the elderly Leo and the stern Henry – are pretty captivating, and multi-layered. They serve to captivate and pull the player along, because Vito simply can’t do that with what he’s been given. That’s more the fault of the writing and the characterizations than anything else, but it serves to illustrate exactly what is wrong with Mafia 2: What’s there isn’t the problem, but what’s been left out is. 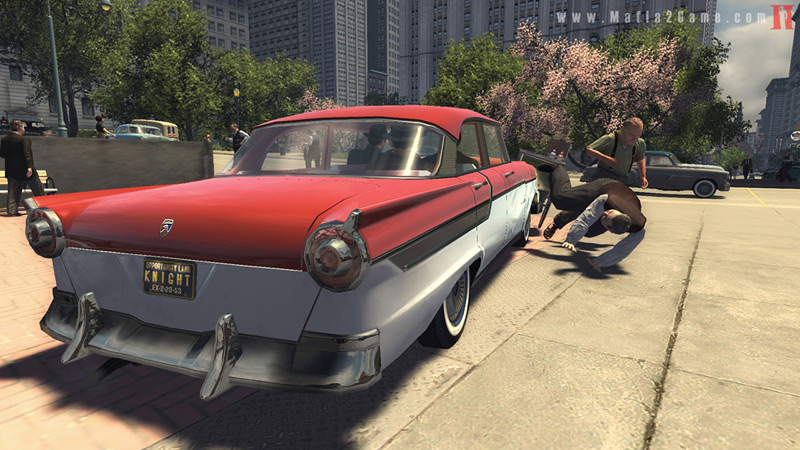 The game itself is styled very similarly after Grand Theft Auto, and presents an ostensibly open-world for the player to explore and fight their way through. I say “ostensibly,” though, because the game world isn’t really all that open; the player is forced along a linear path, with a bare-bones open-world spread around them.

With all of two jobs for the player to undertake, and no side-quests, the game just feels, well, boring. As much as I am loath to compare Mafia 2 to other games, the fact is that it’s miles behind the pack when it comes to the design of the game itself. The world of the game, which is presented as a free-roaming affair, is seemingly lifeless; pedestrians populate the streets, but those streets have nothing for the player to do, beyond the next story mission.

So the player goes through some ten-odd hours of story, which are punctuated by excessive linearity and boring gunplay. Boring gunplay? Yes. There are moments here where it’s almost absurdly easy to hit your target; at other points, it’s frustrating, as you’re wasting all of your ammo firing at targets and not hitting anything.

And where is the option to fire blindly over your cover, or even peek your head around the corner of that pillar that you’re standing behind? That sort of thing has been a regular feature in third-person action games since 2007’s Gears of War. This is not a new feature in gaming, and Mafia 2 feels crippled without it. 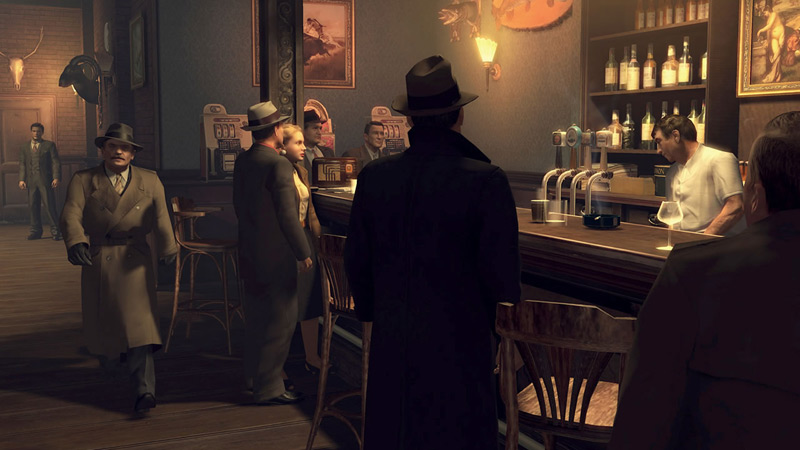 Many, many areas of Mafia 2 feature hundreds of nameless enemies, all getting mowed down by shotgun and Tommy gun fire as Vito (and usually Joe) walk through nameless, generic-looking corridors. The levels that are different than this find the player faced with annoying boss battles that feel arbitrary and play worse. I spent hours on one segment towards the end of the game, repeatedly getting killed by flying Molotovs and charging thugs. And why? Because I wasn’t in the right spot, which was just a pinpoint away to my right.

And none of this is to mention the driving, which is… well, it’s not good. Cars handle realistically, which is representative of the era. But they aren’t fun to drive, handle like tanks and the imposed speed limit system doesn’t do much to rectify matters. I loved many of the other aspects of the game. Voice acting in particular is very impressive, though it should be noted that while it sounds very natural, the game did make the Guinness Book for having a record number of profanities in the dialogue.

The soundtrack, however, is a highlight. There’s a lot here, with not much repetition, and almost all of it is excellent, with a lot of standouts on both the composed side and the licensed side.

Of course, you can’t really talk about Mafia 2 without mentioning the strange licensing of the Playboy brand. Characters are seen reading the magazine, and issues are considered a “collectible” in the game, which unlocks partially nude centerfolds (all fifty of which can be viewed from the main menu). Ignoring the fact that this was touted as a “feature” of the game, it’s also pretty out of place, given the time frame of the events of the game. (A detailed breakdown of objectionable violent and sexual content can be found at the bottom of the review.) 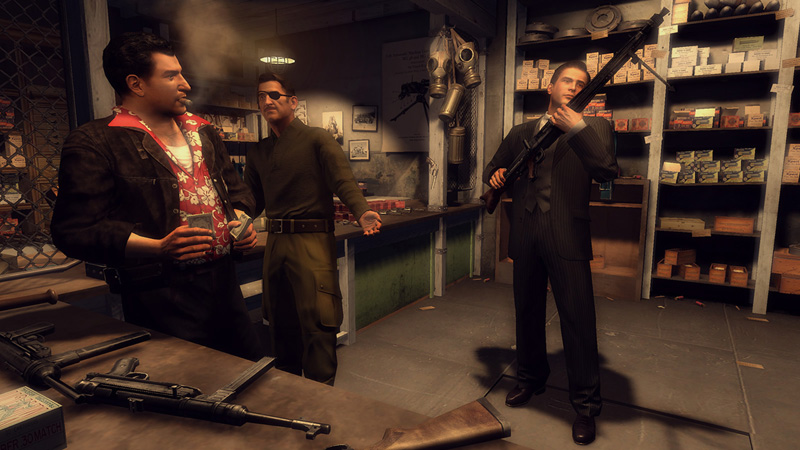 Also worth noting is a sequence in a prison shower, where Vito has to fight off a gang of potential rapists. Realistic? Maybe, but it’s pretty cliché at this point, and I found myself remembering The Shawshank Redemption rather fondly, even though Vito was not, and could never be, Tim Robbins’ Andy. This is not in the game’s favor. I should be captivated by what’s happening to these characters and by the action, not remembering tenuously related films because of incidents that occur in game. And it really does speak to Mafia 2’s derivative nature and the aping of elements from not only the genre itself, but also stories set in the period in which the game takes place.

It’s been almost a decade since the original Mafia came out. In that time, the genre has progressed quite a bit. Its sequel, Mafia 2, finds itself lost in time, remaining stagnant as everyone else moves on.

That’s not a bad thing. There’s an audience for games just like this, and that audience will likely appreciate Mafia 2 far more than I did or will ever do. I liked the story alright, but hardly anything else struck me as indicative of a game that was released in 2010, or even 2009. So Mafia 2 is just kind of there, with all of its warts and boring action and the occasional memorable moment. And that’s pretty much okay, for what it is.

I just hope I don’t get a horse head in my bed for this.

Mafia 2 was played for a total of fifteen hours, with around twelve hours devoted to the story.

Violence: There\'s plenty of violence to be found in Mafia 2. In addition to the regular gunfights that take place over the course of the game, characters are killed during cutscenes, often in horrific ways. This includes scenes where a man will have his throat slit (graphically, while on screen), a torture sequence in a slaughterhouse and blood-spattered endings to major characters that are killed. At one point, a bomb is detonated, and the player must work their way through the wreckage and strewn bodies to the exit, while under the fire of enemies. People are killed in cold blood left and right without much explanation or to the benefit of the plot.

Language: Mafia 2 has, according to the Guinness Book, the most uses of "f***" in a video game, beating out the Wii\'s House of the Dead: Overkill by quite a bit. Knowing that, and going into the game, I found a game rife with profanity (mostly the aforementioned word), as well as various permutations of every curse word imaginable. Definitely one to leave the ears burning a bit, if you\'re offended by that.

Nudity/Sexuality: Where to begin? Let\'s start with the Playboy bit. You can pick up issues of Playboy magazine as a collectible for Mafia 2, which unlock - that\'s right - centerfolds for everyone to see. These aren\'t featuring full-on, full-frontal nudity, but they do show partial nudity (for example, the breasts or buttocks of a model) and are there for seemingly no other reason than sexual titillation. To me, at least, they seemed superfluous, and not in the least necessary. But that\'s not all. You\'ve also got the main characters - usually Joe and Vito - hanging around some rather promiscuous types. These women usually show up in lingerie, and one walks away without underwear on, showing her backside. In another sequence, Vito, Joe and another character all go to what they call a "cat house," where they proceed to get drunk and loose with the women inside. This sequence also has the notable scene where the third character receiving fellatio from one of the women. Yet another sequence shows Vito fighting off a group of men who are attempting to perform a gang rape on him, though the majority of this is done during gameplay.

Supernatural: Nothing encountered or recalled.

Other: Players can break the law in any number of ways, including holding up stores, murder, car theft and similar things. These almost never encroach upon gameplay, but there is the option there (plus a few missions which encourage or require car theft and robberies).