Are you scared of the dark?  Does the thought of dangers, hiding in shadows unseen, frighten you?  We fear the dark because there may be something, or someone, hiding within, waiting for a chance to destroy us.  We fear the dark because it is not in our nature to be at home there.  Well, for most of us, that’s the case.  Sam Fisher lives in darkness; it protects him, it aids him, and it hides him.  He is the monster in the dark that men are scared of.

The story takes place a few years after the end of Splinter Cell: Double Agent.  Don’t worry about this if you’re new to the series, because Conviction catches you up rather quickly as to what has happened in Sam’s life.  His daughter was killed, he left Third Echelon, and he had to murder his best friend and boss for the betterment of the country.  When he finds new evidence leading to his daughter’s killer, Sam Fisher sets off with a vengeance and the intent to kill.  Little does he know that he’ll be caught up in conspiracies and terrorist attacks along his journey, and he’s the only person in a position to stop them.

Splinter Cell: Conviction is a new breed of stealth game. Ditching gameplay mechanics that most of us are used to in a Splinter Cell game (e.g., hiding bodies is not a feature anymore), Conviction reinvents the stealth genre.  Sam is no longer the type of person who hides, or tries to avoid confrontation.  Instead, Sam has become a hunter.  He moves quickly and silently, stalking and dispatching his foes before they’re even aware of his presence.

Everything about Conviction screams fast-paced: Everything, from the action to the story, is and it’s all seamless.  You are only subjected to loading screens if you die, while flashy cutscenes hide the rest of the game’s loading to keep the momentum flowing.  This greatly aids in keeping the player immersed in the story, as does the game’s high level of polish. Because of this, Conviction is an incredibly smooth and stable game. 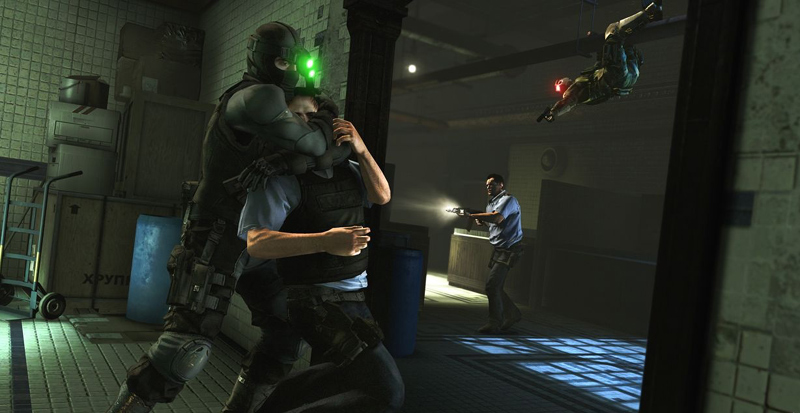 Moral Warnings: Many uses of the foul language, including f- and s-words;  very graphic interrogation scenes

Many intuitive gameplay features have been added to Conviction, all of which will hopefully become the new trend for stealth games.  One being the lack of any stealth gauge, as commonly featured in most games of the genre.  Instead, the screen now becomes colorless whenever you are hidden and out of sight, and returns to full color once you are in the open again.  Along with being a much more informing stealth mechanic, it also gives a more unique look and feel to the general aesthetic.

Objectives are no longer bland bits of text.  Whenever a new objective arises, it will be displayed on buildings, floors and walls.  It’s a small feature, but it stands out very well, and helps keep the game moving.

The biggest addition Conviction brings is easily the Mark and Execute system.  When you mark an opponent, you put a big arrow over their head.  Whenever the arrow is red, you’ll get instant kills on all targets marked.  Don’t think that this makes the game easy, however.  The only way to gain the ability to execute is to perform a hand-to-hand takedown.  You’ll soon realize gaining this ability and remaining stealthy becomes increasingly difficult.

In Conviction, you will always have multiple ways to complete objectives, and for me personally, this was a breath of fresh air.  You can always take the direct route, like the front door, to reach your targets, and start blasting away.  Or, you could take a window or even an air duct to get behind their ranks and thin them out.  As long as you’re creative, you can do almost anything to get past obstacles. 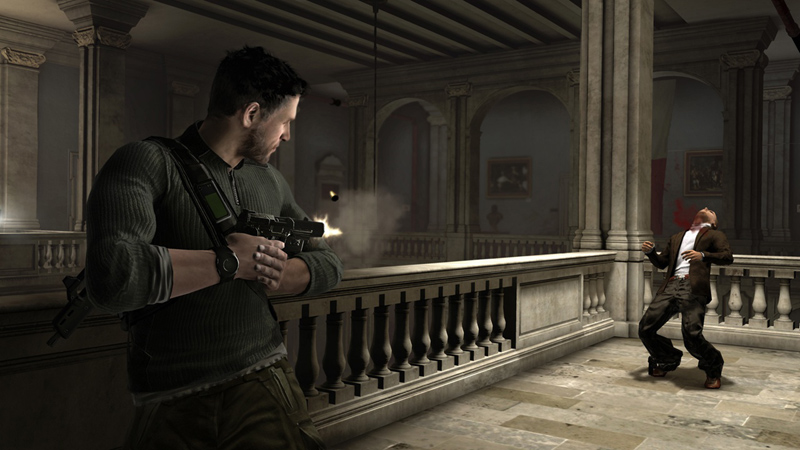 Though you must remember, you are no longer supplied with high-end gear to complete your missions.  You’ll have to make use in Conviction without them, or by finding simple replacements (i.e. Breaking car’s side mirror and using it to peek under doors).  Being able to use your environment and surroundings is key to your survival. Be prepared to blow up some fire extinguishers, or shoot a chandelier to make it fall on your enemies.

Things will go wrong, however, and you will be forced to adapt to your surroundings quickly, or you will perish.  Being spotted is not the end of the world, though; far from it, in fact, because you can use this to your advantage.  Once you’re out of sight again, you’ll see your outlined, translucent figure in your last known position.  Enemies will be drawn to this area, and that’s when you outmaneuver and overtake them.  It’s a handy feature, but I never found myself exploiting it intentionally like others might.

Conviction is not without faults, however, and some of them may turn you away.  One of my major complaints with Conviction is the inability to go a single mission without killing.  In previous installments this was entirely possible, and it’s something I really missed here.  Then again, it may be possible I just lacked the skill to do so.  Regardless, you’re forced to kill much more often, and that’s disappointing.

As mentioned before, the fact that you can no longer hide bodies was also a letdown.  It makes you feel as if you have no choice but to kill, and to kill quickly.  Hiding the bodies was one of my favorite aspects of previous Splinter Cell games, and for the first hour or so, I felt awkward without it.  You get used to not being able to hide them, but it initially hindered my game experience.

This brings me to my next complaint; Conviction is short.  Like five-to-six hours short.  This is easily forgivable if you have someone to share the extra six-plus-hours worth of co-op content with.  But if you’re in this one only for Fisher’s new tale, you may find yourself disappointed by the length of Sam’s story.

Interrogation instances are also something new that has been added to Conviction.  During these points in the game, you’ll need information from certain characters; to get this information, you’ll need to beat it out of them.   And I mean beat, too.  You can beat your opponent with almost everything in your surroundings.  When you take a guy’s head and ram it through a television set, and then smash it into a wall, you’ll see what I mean.  These scenes are beyond brutal, and could be a bit sadistic.  I know I\'m not alone when I say I literally flinched at the brutality on screen as Sam stabbed a man through the hand, pinned him to a stump, and then bashed his head on it.  This is most definitely not a game for children, or the weak of heart.

Sadly, I didn’t get to spend much time with the multiplayer aspect of the game.  What I did get to play, however, was an amazingly enjoyable experience.  Deniable Ops, the two-player co-op mode, is an entirely different game campaign: It takes everything that the single-player campaign has, and then throws a few extras in there, like the ability to do a dual execute.   The joy of Deniable Ops is the ability to play it offline with a friend, something more games need to start letting players do. 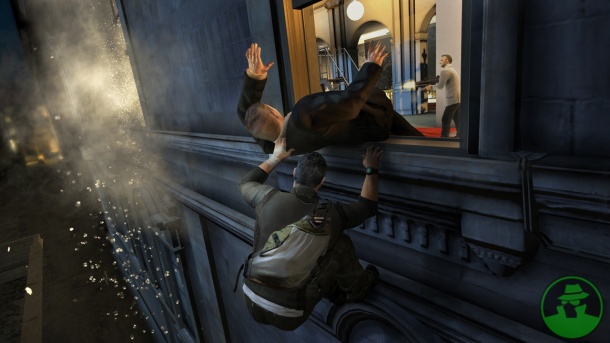 There are quite a few competitive multiplayer modes, but I never got the chance to play with them.  From what I understand, they involve two opposing teams trying to simultaneously complete objectives.  These will, of course, have a Splinter Cell spin on them, so they aren’t generic.  There are more interesting modes, but I can’t really comment on those.

Splinter Cell: Conviction is a phenomenal looking game.  The environments are all diverse, and missions take place in variety of locations, including airports, office buildings, Iraq and more.  There are at least 120 different stealth kill animations, so it never becomes tedious to watch.  And as stated earlier, the transitions between color and colorless add something unique.

Michael Ironside does an outstanding job voicing Sam, and the rest of the cast does well in their roles.   All of the characters are believable and exceptionally well-done.  Just like the voice acting, the sound effects are also outstanding.  The original score is emotional and driving, and it deserves much praise.

I was compelled by almost every aspect of Conviction.  The story was incredible and emotional, and those feelings bled into the gameplay.  You can\'t help but feel something for Sam and his situation, and you start to develop the same want for vengeance as Sam himself.   Plot twists, heartache, joy; you will experience it all, and it will stay with you long after completion.

Splinter Cell: Conviction is something you truly need to experience for yourself.  However, the extreme violence and strong language (spoken of in detail for your consideration below), is worth keeping in mind before choosing to play it. That said, it\'s very different from its predecessors, and other games in the genre, but that\'s what makes it such an enjoyable experience.  It\'s definitely worth your time and investment.  As for me, I can honestly say one thing: I am terrified of the dark.

Violence: When in combat, Conviction, surprisingly, isn’t all that violent.  Little splotches of blood and dead bodies are all you’ll encounter there.  Interrogations are when things get rather nasty, and I mean nasty.  You can use almost any object in your immediate area to hurt your victim.  Be it smashing his head into a urinal, or ramming it through a TV, it is incredibly bloody and disturbing.  Splinter Cell: Conviction is not a game for children, and it makes that very clear.

Language: Foul language is abundant.  f- words, s-words, GDs; they’re all used in excess.  All of these words are heard countless times by Sam and his enemies

Sexual Content/Nudity: Nothing noteworthy.  A light reference or two is made, but there isn’t anything else to worry about.

Cultural/Moral/Ethical: Vengeance and rebellion are big themes.  The whole driving point of the story is Sam taking vengeance upon his daughter’s killer.