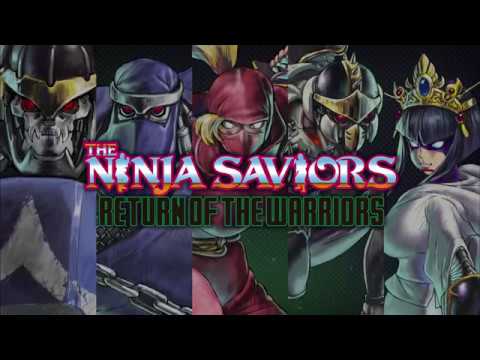 Thank you very much, Taito, for sending us a game code for The Ninja Saviors: Return of the Warriors for the Nintendo Switch!

Since video games have been around for nearly four decades, some common themes have appeared over and over again. One can hardly play a video game without coming face-to-face with a raging robot, a massive warrior, or a stealthy ninja at one point or another. In 1987, the game and toy development company, Taito, saw this trend and figured that they could just throw all of those concepts together to create a fantastic game. Thus the original Ninja Warriors arcade game was born, and its massive three-screen cabinets were distributed the world over. As the game was ported across multiple platforms, the company decided to remake the title in 1994 with The Ninja Warriors for the Super Nintendo Entertainment System. This game became an instant classic and has continued to be considered one of the best SNES titles made.

Well, 25 years after the remake, and 32 years after the original, Taito, along with the game developer NatsumeAtari, have brought the robo-ninjas back for more! Now called The Ninja Saviors: Return of the Warriors, this new game is technically a remastering of a remake. It has brought all the beat ‘em up action from the SNES title to a new generation of players. This new Ninja Warriors game delivers polished pixel art and introduces two new unlockable fighters. As a reskinning of a great older title, there is much to enjoy as well as critique.

Good games don’t necessarily need great storylines associated with them, but they do help. Even a generic storyline can add a little depth to a game, and that is indeed what you get in Ninja Saviors. The nation has come under the control of an evil dictator named Banglar. The revolutionary forces who are standing against this madman have developed ninja android technology and plan on using it to dispatch the leader. As one of those androids, it is your job to fight through the tyrant’s army of trained killers and assassinate him. It’s pretty straightforward, really. 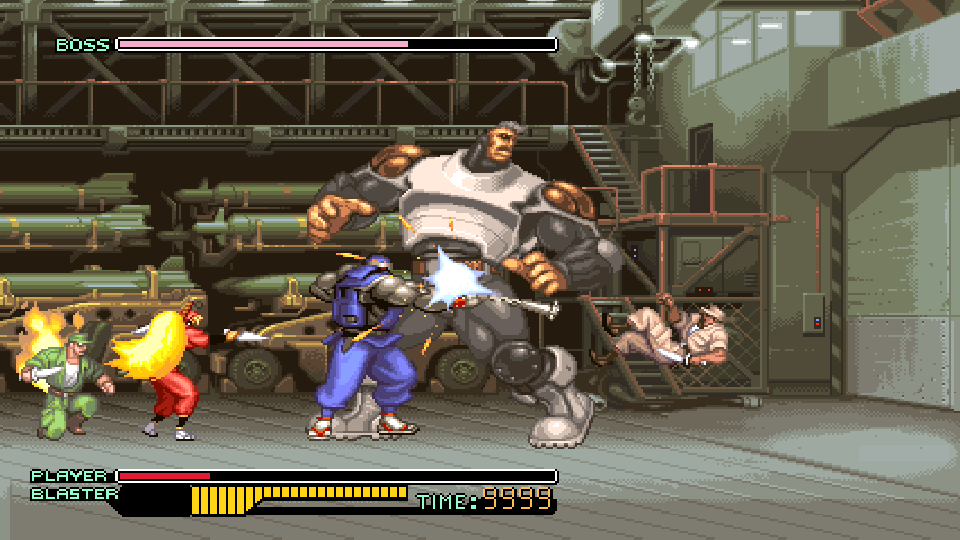 Strong Points: A great remaster of a legendary game; non-stop beat em’ up action; massive and unique move set for each character; an incredible soundtrack
Weak Points: Tenuous and repetitive gameplay; slight balance issues with character strengths; generic and shallow storyline; no north/south movement on the playing field
Moral Warnings: Theme of murder and assassination; some sprites have revealing clothing and moving busts

Ninja Saviors is an action beat ‘em up game that flows from the same vein as the Streets of Rage and River City games. The main difference is that Ninja Saviors is played on a single plane; there are no vertical north and south movements of the players. This makes the game feel more like a platformer than a fighter title, even though platforming does not take place. With this stark difference from other games in the genre, Ninja Saviors feels like the odd man out of the group. However, that doesn’t mean that the game lacks redeemable qualities.

You can initially select the original three robo-ninjas from the SNES title. There is the swift female fighter, Kunoichi, the lanky yet powerful Kamaitachi, and the hulking robot simply called “Ninja.” These three fighters each have unique move sets that are mitigated by a rising power meter that slowly depletes after using special techniques. Some fighters specialize in sweeping area attacks while others simply shoot projectiles. Though many players may feel like the fighters are off-balance, I see each fighter taking a little more skill to use than the others. For example, Ninja is easy to use because of his dash and sweeping nun-chuck moves, but Kunoichi takes a little more skill to use even though she is much faster and specializes in ranged attacks. The two unlockable characters, the small Yaksha and the titanic Raiden, add even more nuance to the character lineup.

Of all the aspects of Ninja Saviors, it is the soundtrack that sets this game apart from other beat ‘em up titles. The SNES version of the game had some of the best music on the system, and those songs are brought to this new title with added polish and pizazz. Each track matches the action that is taking place, from the extreme sound of the initial level to the Eastern symphony of flutes that sound off when you fight Martial Arts Master at the end of the 5th level. The same sound effects are used from the '94 game, and they still sound great! 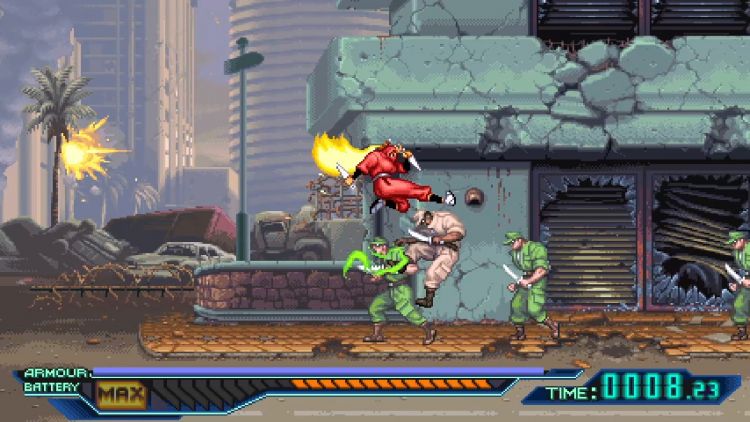 Most beat 'em up games have a glaring flaw that has never been remedied: redundant gameplay. Ninja Saviors, unfortunately, shares this quality in spades, as the action doesn’t change from level to level. There are probably a dozen enemy models that are recycled over and over again in this game. Even though these enemies get stronger, they don’t change appearance, but rather just their clothing color. The only reprieve from this is found in the boss fights, which are all unique character models, but they are defeated the same way; beaten down until they die. The last boss is the only one that forces you to use a new mechanic to win, but that is the only deviation from the regular road to victory.

The most major moral concern of Ninja Saviors lies in its theme. You play as a ninja murder-bot that has been tasked to assassinate a high-profile political leader, and you must kill anyone who gets in your way. This game is heavily inspired by the Terminator franchise, so you could consider yourself a shuriken-throwing T-800. Despite this dark theme, the violence within the game is actually quite benign. No blood flows from the soldiers when they are killed; they simply fall to the ground and disappear. A few of the female enemies wear slightly revealing clothing, but it is hardly suggestive. The unlockable female character, Yaksha, seems a little too “chesty” to be an effective killing machine, but aside from those details, there really isn’t any sexual content within this game.

The Ninja Saviors: Return of the Warriors is a faithful remastering of a great remake of a mediocre arcade game. The pixel art is well-defined and holds up well to other games that use similar animation in this day and age. Though the gameplay can get a little redundant, allowing for a friend to join in the fight will help break the monotony as you lay waste to Banglar’s army of knife-wielding soldiers. The 2-player mode comes right out of the SNES era of gameplay, and you will swear you and your buddy were back in your parents’ basement. This is a great introductory game for players who are new to the genre, and it is a testament to the fact that great games never die.