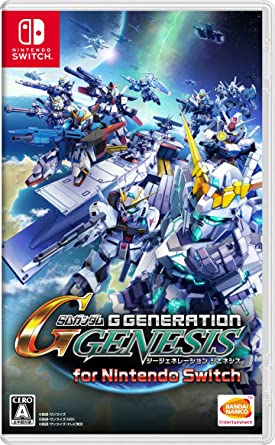 Note: This review was based on the Deluxe version that includes all the DLC for Nintendo Switch. As a result, all the DLC content is factored into consideration for the moral score. This is an Asian English title, though it does not require an Asian Switch account for any features due to the inclusion of all DLC.

When most people hear the word "Genesis", the first book of the Bible comes to mind. In the case of SD Gundam G Generation Genesis, it involves the focus being on the SD Gundam franchise's "first book", namely their Universal Century Gundam timeline. It's a generally good strategy game, some minor issues aside.

SD Gundam G Generation is a turn-based strategy series based on the Mobile Suit Gundam franchise. They typically have "Historical" games, where the goal is to re-enact events from the series as faithfully as possible, and "Crossover" games, where they get more creative. This is a Historical game, set in the Universal Century sub-series of the franchise, specifically in the early period set from the in-universe UC 0079-105 time period.

The following UC media are represented, in whole or in part

(Story indicates the story is represented, other stuff has units and characters only)
{/spoiler} 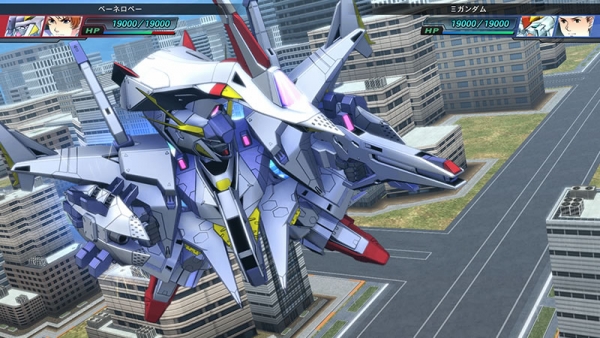 Strong Points: Well done rendition of the UC Gundam franchise to a turn-based game format
Weak Points: Sub Flight System (SFS) game mechanic poorly implemented; some odd translation errors
Moral Warnings: PG-13 language present throughout the game (like a**, s***, and b***h); military-style violence under the premise of self-defense and/or lawful orders; some mildly form-fitting pilot outfits and some one-off flirting; portrayal of extrasensory powers (mostly under sci-fi logic); themes of rebellion against authority, terrorism, and displays of acts against the laws and customs of war

Like all games in the series, it is a top-down, turn-based strategy RPG game. The story is conveyed via visual novel-style sequences, sometimes including video samples from the source media. The game itself takes place on combat maps where each side takes turns, and the combat is shown via CGI sequences based on the UC Gundam art and animation. In-between missions, you can outfit the player-specific teams the game allows you to use that are always under your control. The game missions feature "guest" characters specific to those levels which are also under your control, and the guest characters must not be allowed to die, or you fail the level. The story occasionally allows you to change perspectives, controlling characters on more than one side of the conflict, often to experience the full story of the sources they draw from.

The meat of the game is the upgrading of your player teams. Initially, you start with some really basic units and some really weak characters. As you finish story missions, you can unlock better units, carriers to handle all sorts of terrain, and better characters. You can also upgrade both units and characters, which will be essential to making the harder levels easier. The game also provides some rather simple bonus missions to farm money and experience should it be needed to make the otherwise moderate grind far less tedious.

There is one gameplay system that is very poorly designed and deserves some explanation. The Sub-Flight System (SFS) allows the player to give units a flying platform to use to increase their range and movement. However, the way it is implemented is odd, because you can only equip the SFS to a unit <i>after</i> sending them out to battle. Not only does this not make sense by Gundam logic, but it also prevents many units from using the SFS that otherwise could because they cannot use the SFS once deployed in this manner. The next game in the series would fix this by making it equipable to units prior to sortie, which makes more sense from a Gundam and in-game logic perspective.

Graphically, the game uses a colorful, hand-drawn art style for story scenes and combat maps, often resembling the media the art is drawn from. The combat scenes opt for a stylized CGI instead, also taking cues from the source media. Both look great and have no issues with framerate.

Sounds and graphics heavily mine the anime the Gundam series is based on, with music represented by faithful instrumental themes and the sounds often beat by beat identical to the anime in question. The original characters have their own leitmotifs, and one even has a really nice vocal battle theme. The voice acting is Japanese, but rather little is subtitled to English except for some rare segments. Most of it is fairly easy to figure out via context, but it's still a bit disappointing. 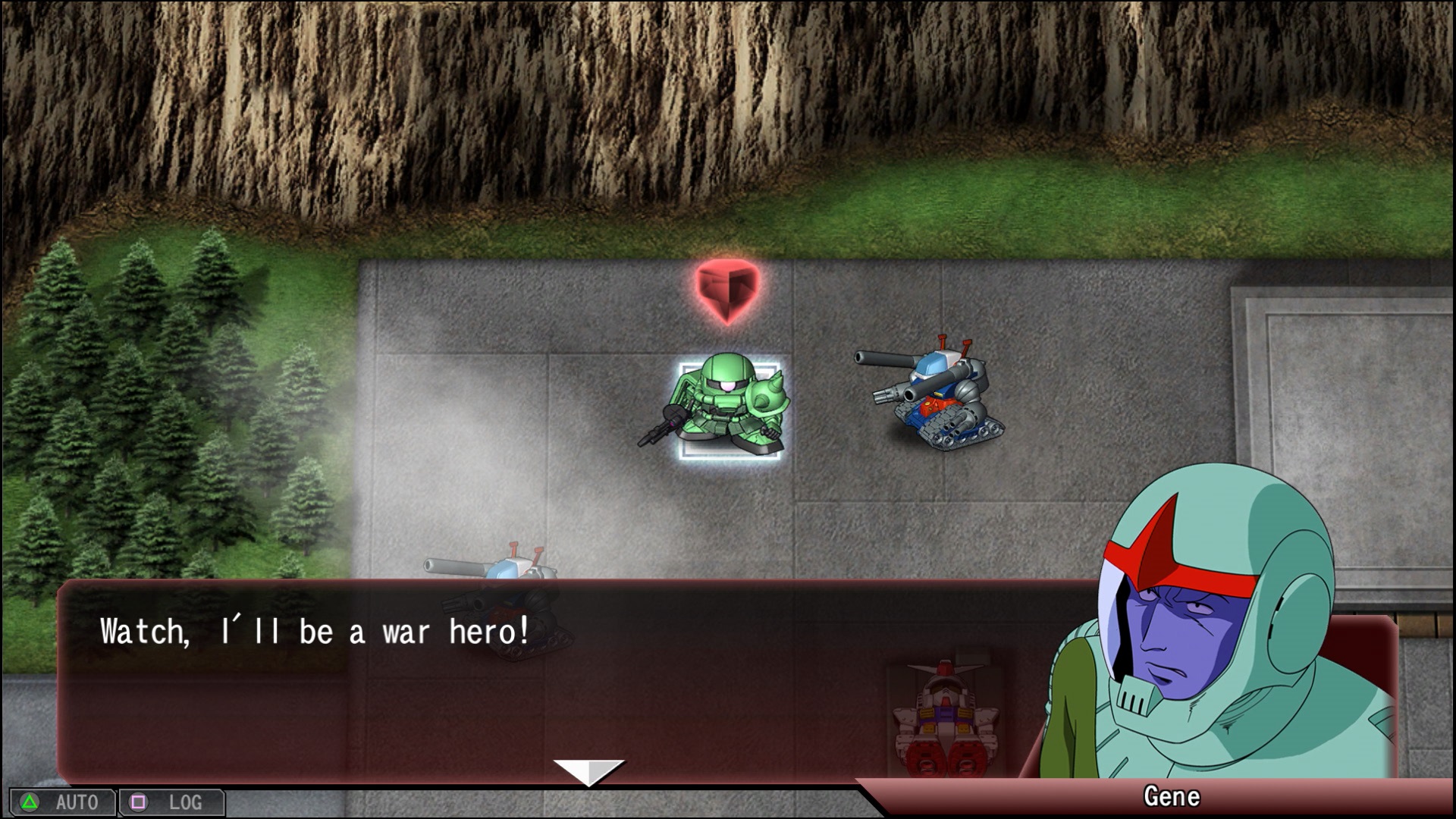 Controls are all mapped to the Switch buttons and analog sticks. I played on a handheld Switch and was quickly adapted to how it all worked. The game is even kind enough to include tutorials for all controls and features for new players to ease the player in.

Stability is quite good. This game has very modest power requirements and I never had my Switch get overly hot or suffer performance issues even after hours of play. The game has all the important text translated to English for English players (save most battle quotes), though there are some noticeable translation goofs. Nothing critical, just a few inconsistent names that will likely irk people. Otherwise, this has rock-solid performance.

Morally, given it focuses on the Universal Century Gundam franchise, it has some content worth explaining.

Violence is of the "give orders and watch it happen variety". It's generally sterile and bloodless, with destroyed mechs disappearing after being shot down. The violence always takes place in the context of self-defense and/or lawful orders from a chain of command against a legitimate military target, the player is never put in the position of harming any target that cannot and does not fight back.

Language can get a bit earthy. UC Gundam is set around a series of military conflicts and practically every curse and swear in the PG-13 category can be heard at one point or another. Sexual content is quite low; some female pilots have some rather form-fitting pilot outfits, but that's about it. There is some mild, PG style flirting, mostly one-off instances that don't go anywhere.

The supernatural and occult are not a big focus. The in-series Newtypes, or people with extrasensory abilities, are generally regarded under sci-fi logic, though some of their abilities stretch this rationale to its limits. The Gundam Unicorn storyline does make some generally positive references to Christianity, but otherwise, the subject is not discussed in detail.

Morally and ethically, this is a very cynically morally grey universe, and sometimes, both sides look kinda bad. The player sometimes must switch perspectives to play as both sides, and while many of the storylines involve formal combat between lawfully recognized belligerents, a few involve acts of arguable terrorism which the player must help take part in. Themes of betrayal, implications of active participation in war crimes and extralegal actions in general, and a lot of "evil versus evil" style moral conflict are all prominent themes. There is a lot of prejudicial bias, in-universe between those born in space and those born on Earth. It's clearly shown that this and any other form of prejudice is clearly wrong, though it is an omnipresent element through all game storylines. There is at least one storyline where a rebellion against corrupt military officials takes place, though the rebels take pains to avoid terrorism against civilians.

There is an omnipresent moral theme worthy of note. The storylines all share a recurring theme that hatred begets hatred, and only by ceasing the cycle of hatred will the perpetuation of violence and misery stemming from it will cease. The lesson of the game on this is essentially a secular version of this Bible verse:

"And he shall judge among the nations, and shall rebuke many people: and they shall beat their swords into plowshares, and their spears into pruning hooks: nation shall not lift up sword against nation, neither shall they learn war anymore. - Isaiah 2:4"

From a technical standpoint, this is a very good and well-balanced turn-based strategy game, with some odd translation goofs and the poorly implemented SFS system aside. From a moral standpoint, this has a lot of earthy language, military-style violence, and a lot of morally questionable themes of terrorism, war crimes, and other content not suited for anyone who is not at least an older teen, similar to the franchise the game draws its material from. Overall, it's worth buying, especially the version with all DLC included, and I recommend it highly to fans of turn-based strategy and UC Gundam fans.