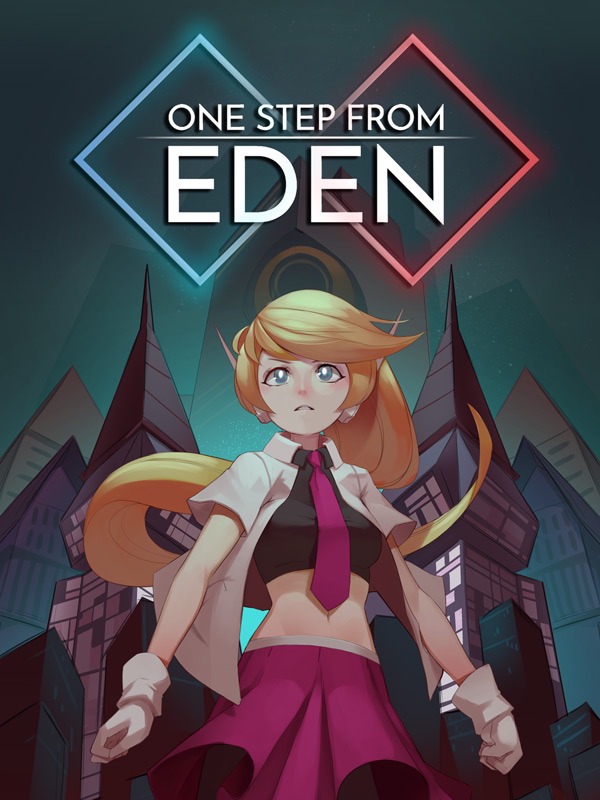 I really enjoy the Mega Man Battle Network series and jumped up at the chance to try out One Step From Eden, which is a deck-building roguelite that acts as a love letter to the former. With a refreshing take on the deck-building gameplay and highly replayable routes, there is a lot to love in this game.

While slim on story, One Step From Eden tasks you with reaching the titular place by finishing eight worlds with a boss in each (which are all playable characters as well excluding the final one in a run). Battles take place on an 8X4 grid, with you and the enemy taking 16 squares each. You can move around freely in your side and activate spells that need mana in order to cast. All characters have a way to regenerate mana, with most of them having this done automatically. By completing stages, you will have the chance to select a random spell to add to your deck, which have different properties that will help or hinder you in your run. You can also level up with experience, which will also grant you artifacts to use; these have beneficial effects that will last until the end of your run. Due to the procedural generation of the game, each run is unique (though you can pick a seed number if you’ve written it down and can replay that identical instance if you desire).

While you only have Saffron initially, defeating characters later in a run will cause them to be unlocked for future playthroughs. Each world consists of different stage battles, which will pit you against different enemies in each environment. You can select your path after each battle, which will also give you different locations to visit, such as a campfire to heal or a miniboss. After reaching the end of a world, you will fight a boss character; completing this will allow you to choose the next world and the gameplay loop continues until you beat every boss or lose. Additionally, you can also choose to spare or destroy bosses after you defeat them, both of which grant different benefits and endings should you spare everyone, destroy everyone, or do a mix of both. 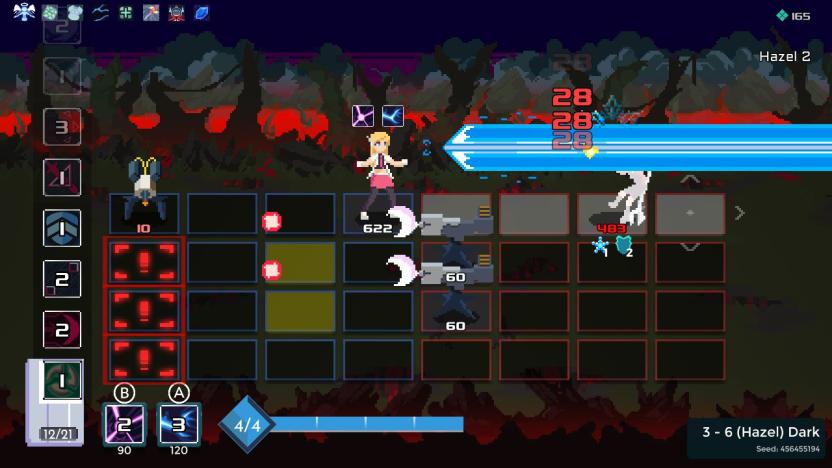 This is easier said than done, however, as difficulty ramps up around the halfway mark in a run. (It’s actually quite difficult throughout the whole game, but difficulty spikes occur around world 4.) Sometimes it can get too unfair, with some bosses like Shiso and Violette getting an unfair amount of damage and speed in later levels. You can try and pick trickier bosses first due to difficulty scaling, but since there are four locations with two bosses each, you might still get unlucky with picking the other boss in a location first. (Since a playable character can’t fight themselves, the last world is unique to the final bosses.)

Thankfully, the game is easy to control, and each spell card is given clear descriptions for you to determine whether you want to keep it in your deck or not. Thanks to shops and in-game currency you earn while in a run, you can also purchase new cards, upgrades, and removals (which can remove a card from your deck for the run). Dying will reset your progress back to the initial loadout of the character, but will unlock different artifacts and spells that you can encounter in future runs, which is a great progression method for the game. Runs last around an hour depending on if you’re successful or not, though it will be almost impossible to finish the game in one go. 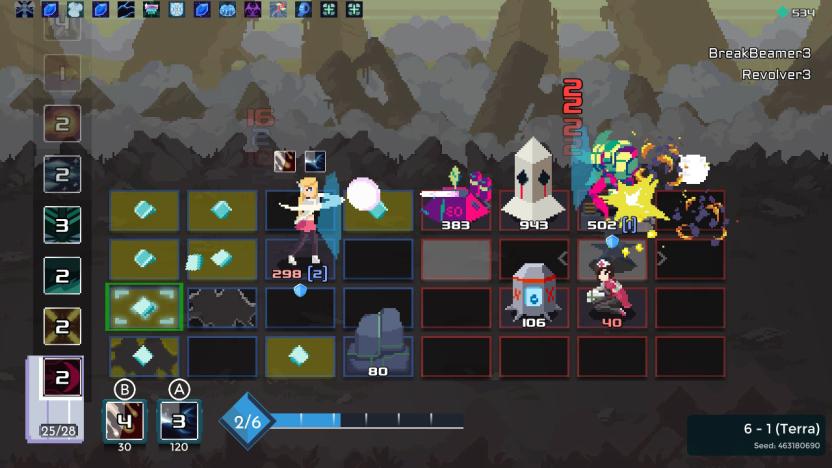 In terms of presentation, the game looks beautiful with its detailed pixel style. The soundtrack is amazing too, with some tracks that won’t stay out of your head long after you finish playing. The writing in this game is great as well; while there isn’t a lot of backstory within the game, there is some nice worldbuilding dialogue during boss fights, and spells have flavor text that references a ton of pop culture and media. From Super Smash Bros. to Konosuba to even the Mega Man Battle Network games, there’s a lot to love. However, there were a lot of times after playing for a lengthy period of time that the game would stutter, freezing it for a second or two. While this wasn’t a dealbreaker oddly enough (because of how precise you need to be with your attacks later in the game), it was cause for annoyance and did cost me a hit or two in a run.

In terms of morality, there are a few things to mention. There are a few utterances of mild swears, such as hell and d*mn. In terms of violence, it’s bloodless but losing to boss characters will cause them to use a signature attack to destroy you. These finishers are more violent and detailed than regular attacks, though it only shows you disappearing with no gore shown. You can make pacts that will make the game harder in return for giving you a benefit; while nothing of the occult is explicitly mentioned, the challenge is represented by a small pentagram-like icon. Some stages will have hostages that you can rescue. You can accidentally destroy them by attacks (either your own or the enemy can destroy them), and there are a couple of artifacts that encourage you to kill hostages as well by providing bonuses for destroying them yourself. These are optional playstyles, but are still a bit objectionable.

All in all, One Step From Eden is a great game for fans of the Mega Man Battle Network series, and fans of brutally satisfying difficulty and great action should definitely check it out.