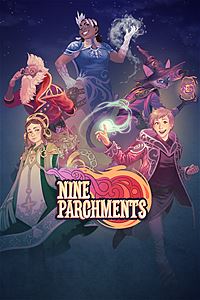 Thank you Frozenbyte for sending us this game to review!

Nine Parchments takes place in the Trine universe at the Astral Academy. The students there are a ways away from graduating, as they have to master their spell casting techniques and not be a hazard to anyone near them. In the middle of a lecture, there is an explosion in the building and nine of the academy’s parchments go flying away in the wind. To redeem themselves, students vow to return each of the parchments safe and sound.

When first launching the game you’ll get to choose your gametype (single or multiplayer), difficulty level (Easy, Normal, Hard, Hardcore), and mage. At first, there are only two mages available, but as you collect staffs and complete quests you’ll unlock others. Each mage has a starting spell set that can be altered later on. The mages can equip hats and staffs that can enhance their appearance or boost their spell casting abilities. 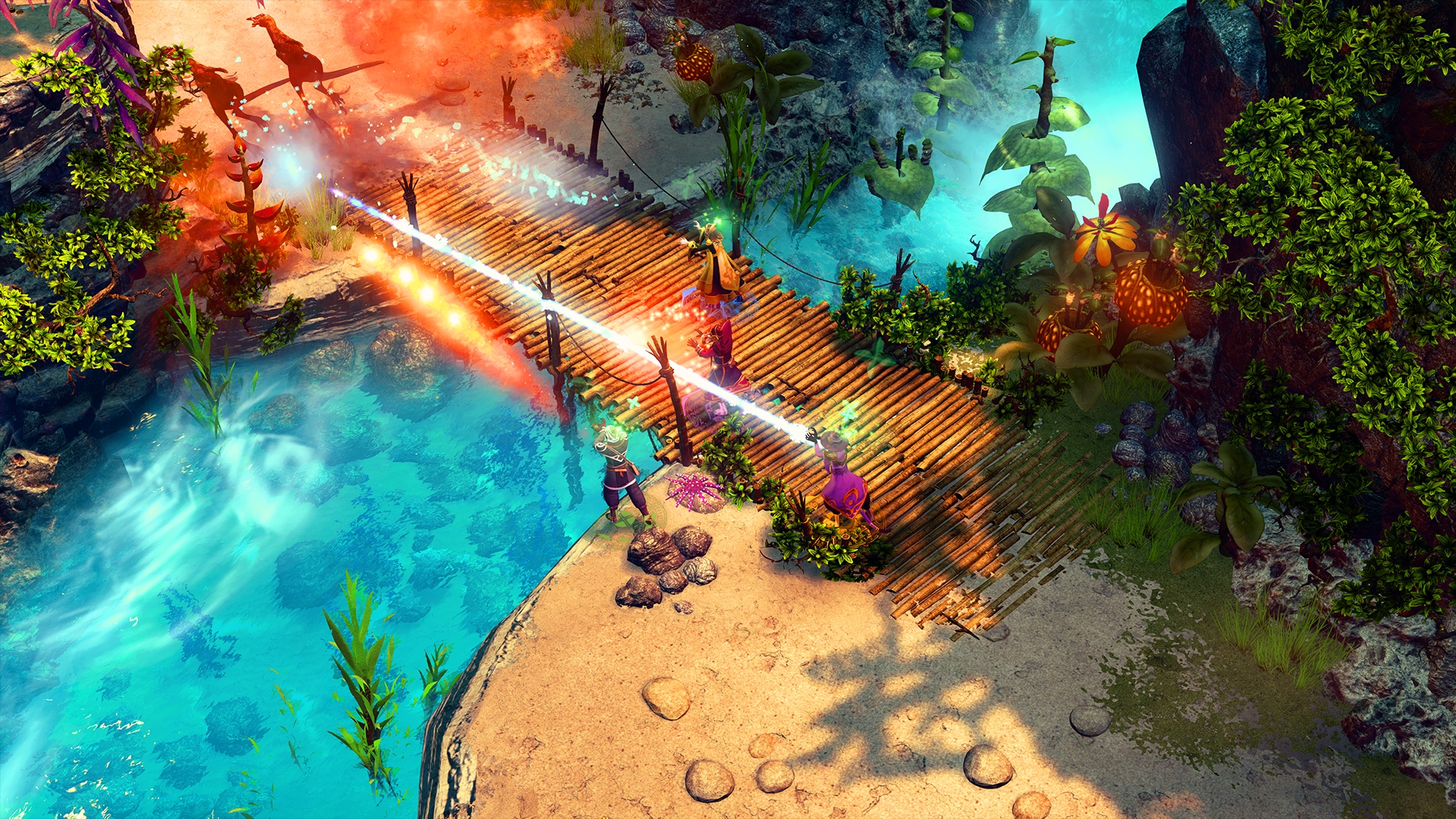 Strong Points: Wonderful visuals, music, and voice acting; fun multiplayer gameplay
Weak Points: Multiplayer joycon controls are trickier to use than a pro-controller
Moral Warnings: Fantasy violence and magic use, pentacles adorn some of the staffs

The tutorial level will show you the basic movements and techniques. I found that playing in twin stick mode is much easier than using a joycon by itself. I couldn’t figure out how to flash (quickly dash) when playing in multiplayer mode using a joycon. Jumping and spell casting are other critical skills that need to be mastered before venturing out from the academy.

While exploring and taking in the beautiful scenery, you’ll need to keep an eye out for treasure chests and collectible blue quills. The treasure chests can blend in and are not easily noticeable. I like how the game lets you know how many quills you have collected and how many remain on the level. Since backtracking isn’t always possible, you’ll need to stay alert at all times. Monsters will come from out of the ground and other areas and will start swarming and/or pelting your character with magic attacks. Your mage has a limited number of spells and mana at their disposal. Many of the creatures have elemental affinities so if you attack them with their weakness, you’ll do more damage. However, if you attack a fire creature with a fire spell, no damage will be taken. If you’re in a pinch you can do a melee attack but mages are pretty weak and can’t take too much damage before dying.

If you’re playing solo you will get resurrected once before having to respawn from a checkpoint. Multiplayer co-op allows for unlimited revivals and if all of the mages die, a random one will be resurrected once like the single-player mode. 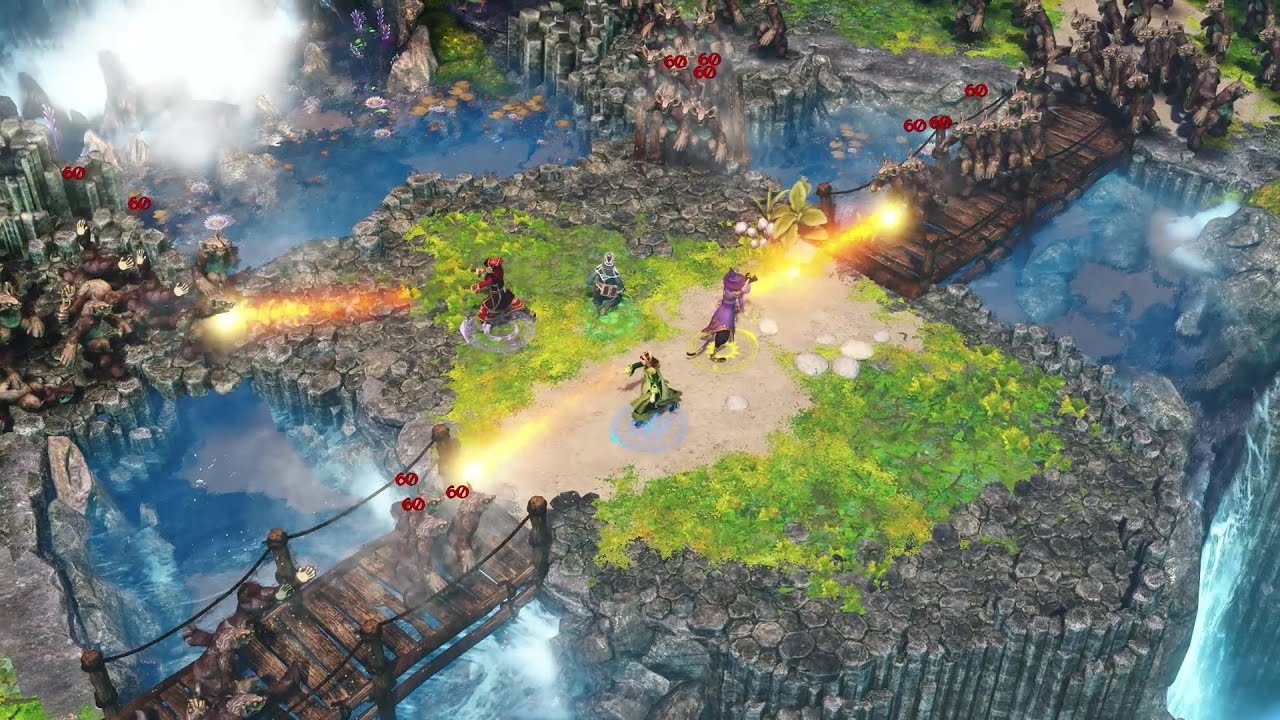 As long as you exploit the elemental weaknesses of enemies, they should go down with little effort and some dodging while you’re waiting for your mana to refill. The bosses are much more challenging and they all seem to be attracted to the parchments for some odd reason. Some of the battles take place in confined spaces and when you add area of effect damage, things get pretty hairy. When playing with friends you’ll have to take friendly fire into consideration as well.

Though Nine Parchments is rated for everyone ten and older, there are some moral issues worth noting. Magic is a given and unavoidable since enemies will use it against you. Sticking with melee only attacks is suicide. When enemies and players fall in battle they do not bleed and there is no gore; they may break into pieces though. If you use an ice spell there may be chunks of ice left behind. I was saddened to see pentacles adorning some of the mage staffs.

In the end, Nine Parchment is a well polished game that is best enjoyed with friends. Just make sure that your allies are accurate with their spell casting and don’t hurt you too badly. If you don’t like magic or occult symbols in your games, you’ll want to look elsewhere.