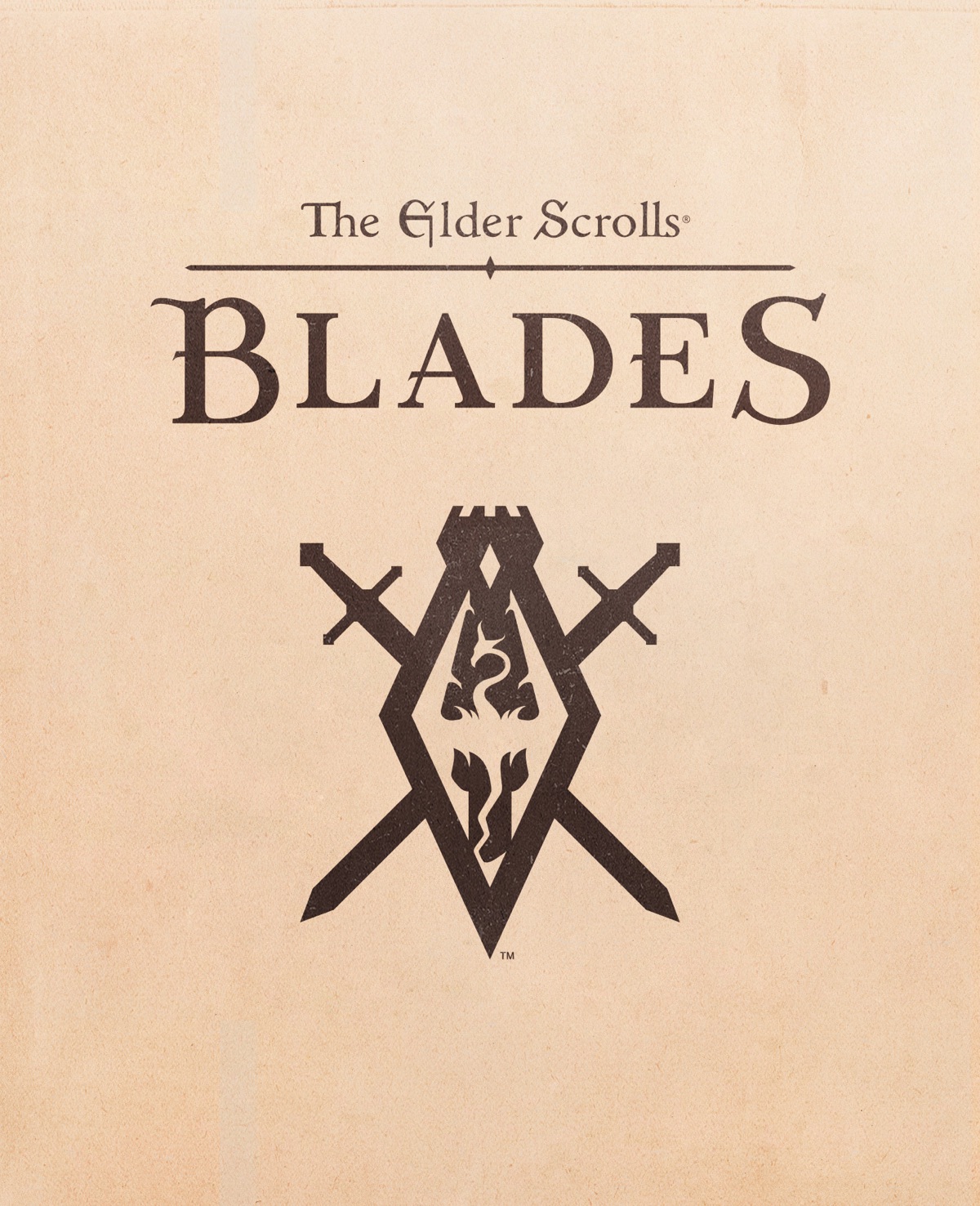 Note: Review based on the content present in the 1.7 client, which is the latest at the time of this writing.

Generally, spinoff games wind up either being fun in their own right, better or worse than the main series entries, or are a nice complement to the main series if done well. Elder Scrolls: Blades is something of a mix of all three, with mixed results.

Set after the Oblivion Crisis of the fourth series entry and the Great War that followed but before the events of Skyrim, ES: Blades is a side-story for the Blades, the former bodyguards of the Septim heirs now driven underground and forced to hide from assassins sent by the Aldmeri Dominion. They forced the weakened post-Septim Empire to cut off support for the former Blades after the Great War, and you play as a former Blade now struggling to survive.

Set in Cyrodiil, you return to your hometown (default name Rivercrest) to discover it has been leveled and that while you are trying to evade the Thalmor, the hit squad the Dominion dispatched to hunt you down, the townspeople are even worse off, and by improving their fate, you secure your own. In the process, you discover political intrigue abounds, an ancient evil has been unleashed, and one of the titular Elder Scrolls may be at the center of it all.

The gameplay is a mix of elements from The Elder Scrolls (TES) titles. The combat and user interface draws from the first two entries (being first-person only). The narrative style is a mix of the third and fourth entries, with careful speech being an integral mechanic like in the third and fourth titles. The other gameplay mechanics, such as the crafting, item maintenance, and town-building, adapt elements of the fourth and fifth main series titles, though in a simplified format. You can optionally spend money to acquire treasure chests with randomized boosts and resources, but this remains strictly optional, it's possible to enjoy yourself without ever spending a single cent. 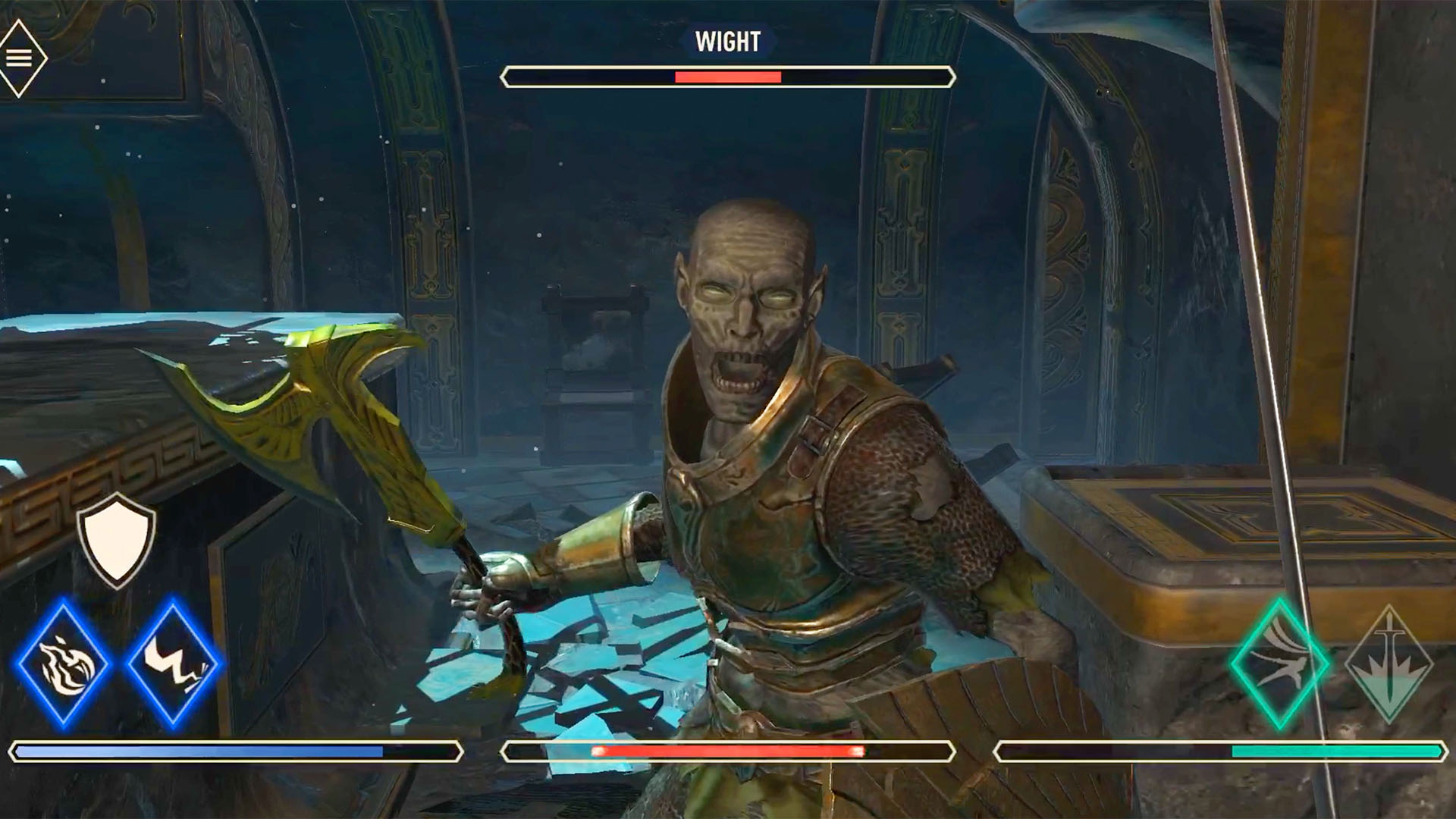 Strong Points: Good simplified distillation of Elder Scrolls mechanics for portable systems
Weak Points: Unstable; buggy textures
Moral Warnings: Action RPG violence; minor flashes of blood upon being hit though no gore; corpses are left after death; mild language {occasional h*ll and d*mn mostly); a few mildly revealing outfits; necromancy as a prominent theme (though portrayed as an absolutely bad thing); a few options to be a jerk in dialogue, though not encouraged in-game; clear discrimination to a religious minority (though you have the option to assist them in avoiding this)

If you've played a TES entry or any RPG in general, this will not take long to get used to, and the game is generous with tutorials to get you started if you're a newcomer. The game is well optimized for cross-play on multiple platforms, so it features many mechanics that are much simpler than the main series releases on purpose. According to the developers, this was intentional so the player can play on one platform and resume on another, like going from Switch to PC and vice-versa. Some ports like the mentioned PC port, are TBA at this time, but it has been confirmed all ports will be able to resume from each other seamlessly. Unlike other entries, this is not an open-world title, it's more much of a dungeon crawler with randomized areas and a single town that serves as your home base in-between dungeon crawls.

Graphically, it's medley of TES4 and TES5. It has the overall aesthetic and setting of TES4 Oblivion while using quite a few TES 5 Skyrim assets when and where possible. The overall effect captures the interquel nature of the game rather nicely. In terms of how well it looks, they generally succeeded in making the game look nice, and graphically the game can compete at times with the main series console releases for quality. However, there are some visual glitches, like some stray missing textures and floating items in a few places. Nothing game-breaking, but noticeable enough during causal play.

Music is again a mix of the Oblivion and Skyrim style soundtracks, with some original soundtracks, including some excellent combat music. Voice acting is quite crisp, and while some voice actors are new, both they and series regular voices sound good. Sound effects are directly lifted from TES4 and TES5 for the most part and sound just as good as they did then. Aside from some odd combat music timing issues, which admittedly is not uncommon to the main series as well, it all sounds perfect to my ear.

Controls are a greatly simplified adaptation of the more complex PC and even console control schemas for all platforms, and this was adapted well. I played on a handheld Switch, and aside from cramping my hands with frequent camera adjustment with one of the directional sticks at times, I had little trouble getting anything done. Combat has been adapted more a rhythm game like system where timing and combos are vital to simplify the action RPG controls used in the main games. There is a town management system that is also adapted well for repairing buildings and placing town decor that also makes use of streamlined controls, with again only camera adjustment being a slight hassle at times. In this mode you walk around town, choose places to rebuild ruins into houses and business, and with a few button presses can easily allocate collected resources from dungeons to newly restored buildings.

Stability is where this drops the ball. The online portion tends to break connection quite a bit, ranging from merely being annoying when trying to sync with an opponent in the in-game PvP arena, to being downright game-breaking when it just hangs after collecting a treasure chest and the controls become utterly unresponsive. Fortunately, the auto-save system works fine and a simple reset will bring you back to just before things went wrong. Regardless, these crash and hang issues are extremely common and put a severe crimp in the fun factor. Morally, we've got some issues in several areas.

Violence is pretty restrained for a TES entry but still present, with you often having to fight in self-defense or defense of others against monsters and humanoid enemies. While blood display is limited to a brief spray from weapon strikes and bodies simply hit the ground and stay there after death with no blood or gore display, it's not uncommon to leave a dungeon area littered with dead bodies.

Language is pretty mild, with maybe a few scattered d*mns, but the language is otherwise tame. Sexual references are also tame, with maybe a bit of cleavage shown in some outfits and armors at absolute worst. There are some references to Oblivion (the TES version of Hell) and some generic references to the various fantasy deities of the franchise, most being fictional variants of "God bless you" or something similar.

Occult and supernatural content is prevalent, with necromancers being common foes, and their creations a notable part of the main campaign, though this is portrayed as wholly bad and worthy of being stopped. Unlike some other entries in the series, you are unable to engage in any necromantic acts yourself, and given you play as a former Blade, this makes perfect sense for lore reasons. That aside, all the other magical depictions are pure fantasy-oriented and otherwise downplayed or not given major focus.

Ethically speaking, you don't have options to do anything downright evil, though you can be a jerk in dialogue. It's not recommended, and even in-game tact, guile, and diplomacy are encouraged to get more done. On a related note, on top of being brick subtle defiling the souls of the dead or otherwise tampering with the supernatural in pursuit of evil is an act beyond the pale, they weave the nice guy dialogue options into another good moral. Specifically, with careful words, you can resolve quite a few incidents with far less to no bloodshed. There is even at one point you can talk down a necromancer, make him realize the evil in what he's doing, and his moral shame is such he abandons his ways and assists you in stopping his former friends. In general, the game encourages the player to consider their tongue just as much a weapon as their blade and to be wise with it's use to restore peace.

There is some clear discrimination against the followers of Talos, who is an in-game equivalent to Jesus to a limited degree (as a man who was also deity in-universe). They are being persecuted no matter how benignly they wish to worship due to the conditions of the war concluded in the backstory, though your character does do their best to subvert and avoid as much of this as possible.

Overall, it's got some promise as an on-the-go dungeon crawler with a side of town-management, but the stability issues put a crimp in the enjoyment, even if the game itself is free. Morally, it's got some violence issues and the necromancy theme is troubling even if it's portrayed utterly negatively. On the other hand, encouraging your player to choose your words carefully to seek bloodless/less bloody ends as a result of guarding your tongue are some laudable moral lessons one can take away as well. If you can deal with issues mentioned, any teenager or older would likely enjoy this as an Elder Scrolls entry for casual play.