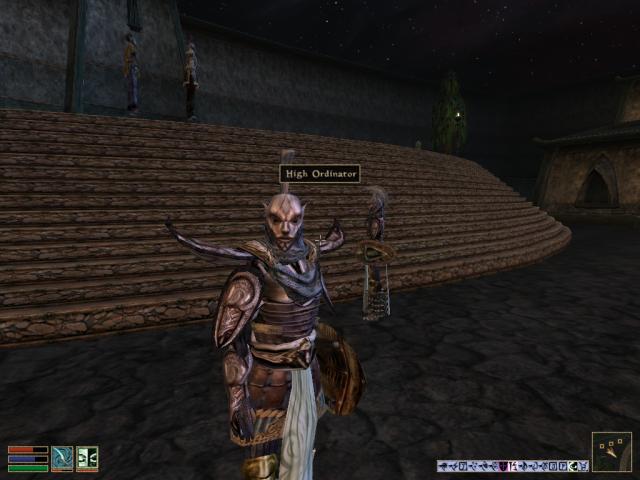 In Tribunal, a ruthless new king has taken the throne of Morrowind, while an aging god drifts deeper into madness. Into this chaos you are thrust, with deadly assassins close behind you and Morrowind\'s uncertain future ahead. Your journey will lead you to Mournhold, capital city of Morrowind, to the Clockwork City of Sotha Sil, and through massive, epic-sized dungeons. *

You begin this new adventure by resting. It\'s not very peaceful, as you are awakened by assassins. That\'s right! A group called the Dark Brotherhood is after you. You must find out why there\'s a contract on your head, and doing so requires you to travel to Mournhold. In Mournhold you\'ll meet King Helseth, who acquired his throne in a suspicious manner, and a powerful goddess Almalexia. Strange things have been happening in Mournhold. You will get to battle new foes, unravel treacherous plots, and once again prove yourself as the Nerevarine.

Mournhold is HUGE. Explore the many areas of this city. There\'s the Temple where you can meet the goddess Almalexia and her elite guards. The Great Bazaar has many shops and an outdoor theater. (Which you can act in!) In Godsreach you can explore mansions, bars, and historical museums. The royal palace has the king, guards, and the Imperial Cult. Interconnecting these areas is a huge sewer system with many new enemies waiting for you.

What kind of new stuff is there?

The armorer in the craftsman\'s hall can outfit you with custom armor. You need to provide the raw materials though. One of the story line quests has you forge a fiery sword that\'s quite powerful! Until then, check out the goblin short swords, they are quite nice to hold you over in the meantime. One of the best additions in this game is the inclusion of pack rats. Yes, you can have a trained rat carry 100 burden points for you. There are also mercenaries who will defend you for thirty days for a price of $250. as convenient as they may be, you must take into consideration the dumb AI. I have lost my pack rat a couple of times and had to reload a game or two because of it.

What kind of quests will I go on?

The main story line quest involves rivalry between the new king and the goddess Almalexia. You will often find yourself choosing sides. There are many fun side quests as well. You can act in a play, help a person find clutter, stop a religious suicide cult, and even become a bouncer. There are many more. All in all, this game will add an addition 20+ hours of game play.

This game has a few bugs worth mentioning. When you convert your previous saves (takes 10-15min) you may have to repeat some quests. The Umbra quest will be recorded in your journal but not completed. I noticed some scripting errors. The one that comes to mind was with Fons the womanizer, if you talked with him before the lady looking for a mate, you\'ll get errors. Finally, I experienced some graphical errors where I could get stuck or see through walls etc. The game really didn\'t crash much but some of these glitches could have been fixed or tested more thoroughly.

From a Christian perspective this game has violence. You will definitely have to kill various monsters and people...sometimes you have to do this to win favor with the king or goddess. Killing people can usually be avoided, often times you can settle things peacefully via bribe or working things out. I noticed that swearing was more prevalent in this expansion than in the original game. There are sexual references. Finally, magic use is prevalent and there are multiple gods in this game.

This expansion is easy to install and the game continues to be run off of the original Morrowind game CD. The interface is the same with exception of the improved journal which allows you to view by quests. You can view a list of all quests or just completed ones. The graphics are still AMAZING! The new world is very big and detailed. You will experience different weather conditions from fog, to sand storms, night and day, etc. The character and armor detail is great too. My only complaint with the graphics engine is that it loads often and it can be slow at times. The sound and EAX effects were still good. I was a little disappointed that there were no new music tracks. Traveling the gloomy sewers could have used different music than the cheerful exploration tune. There were some new voice comments added; some were quite humorous. If you don\'t mind the relatively short game play and the increased focus on the religious system, I would recommend this expansion.