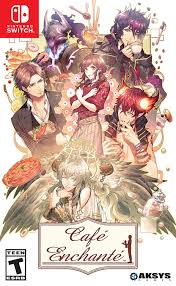 In Café Enchanté you get to play as Kotone who recently inherited her grandfather’s café that she hasn’t been to in fifteen years. When her grandfather said that his customers come from great distances to hang out there, he wasn’t kidding. In the back room is an antique door that connects to other worlds and the majority of the customers are non-human.

Being an otome (reverse harem) visual novel, all of the regulars are datable and each story arc involves saving their home world or the human one. The choices you make will determine your bachelor and their affinity toward you. If their affection is not high enough, you’ll get a good ending instead of a perfect ending. Perfect endings are required to unlock new routes including the final (Misyr) route. There are multiple game-ending bad endings so be sure to save your progress often!

Here’s a breakdown of each character:

Canus Espada – A headless knight from the fairy world of Medio. He’s a perfect gentleman who enjoys gardening and helping those in need. The townsfolk refer to him as helmet man.

Ignis Carbunculus – He’s a fire wolf from the world of Bestia. Ignis is the strongest in his world which is a good thing since strength is valued above all. Though many beasts there don’t think twice about taking lives to prove their strength, Ignis has a “no kill” policy. Ignis speaks his mind and does not hold back his tongue. Most of the swearing and blaspheming in this game comes from him.

Il Fado de Rie – A fallen angel from the celestial world of Caelm. He’s great with technology but lacks common sense. Il spends his free time in his room playing otome games on his portable console that looks suspiciously similar to a Nintendo Switch.

Kaoru Rindo – A government agent who keeps tabs on the non-human customers at the café to make sure that they are not a threat to humanity. He often has to clean up messes from careless mistakes made by the regulars at the café. At age forty-two, he’s often teased about being old.

Misyr Rex - A powerful demon king that treats the regulars and Kotone as family. If any boyfriend were to mistreat Kotone he wouldn’t hesitate to show them no mercy. 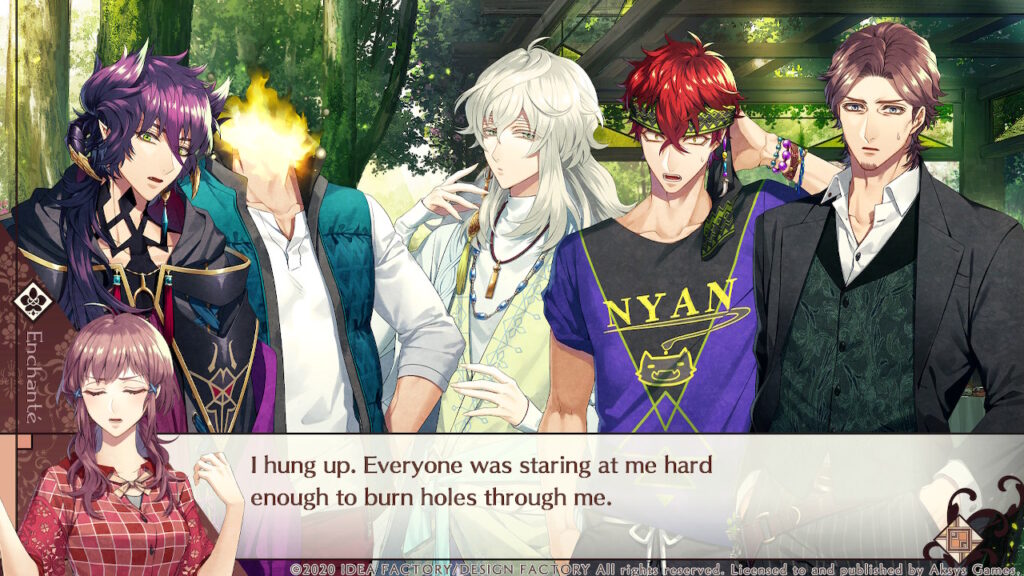 Though I saw a few typos, the dialogue is well written and the voice acting is top notch. I was able to pick up on the occasional English sounding word, but the majority of it is in Japanese. The background music is pleasant to listen to and the sound effects are quite fitting. Since this takes place at a café, you’ll read about the coffee making process and hear the sound of coffee beans being ground and the pouring of liquids into cups.

There are also many violent battles and hearing the sounds of bones crunching made me wince as I imagined the pain the characters were going through.

There are many battles with bloodshed. Visibly seeing characters cough up blood is not uncommon. Death is a common theme as well. In the heavenly realm of Caelm, angels do not have free will and the moment they gain sentience, they are considered fallen, hunted down, and executed. Caelm’s god is shown as uncaring and power-hungry.

Some sexual jokes/references are made, but nothing goes past kissing in this game so that’s good. Without spoiling anything, at least one of the routes ends in a marriage proposal while the others end in happy relationships.

Café Enchanté certainly has an interesting cast of characters and good story routes to accompany them. If you don’t mind blood, violence, language and blaspheming, it’s worth exploring if you enjoy otome visual novels. Completing all of the routes (using a walkthrough) took me over twenty-five hours so I think it’s worth the asking price of $49.99.