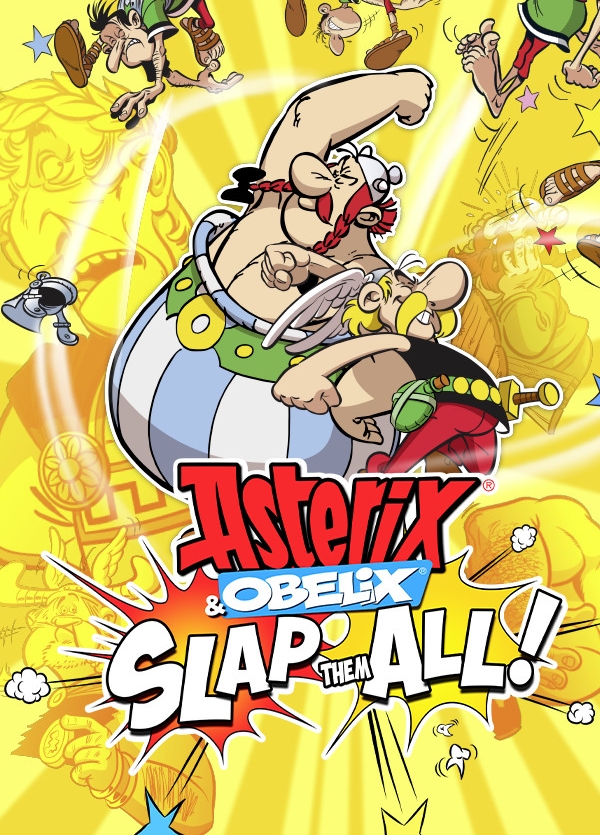 Asterix & Obelix: Slap Them All!
Developed by: Mr. Nutz Studio
Published by: Microids
Released: December 2, 2021
Available on: Windows, PS4, Xbox One, Nintendo Switch
Genre: Beat ‘em up
ESRB rating: E10+ for fantasy violence and alcohol reference
Number of players: Up to 2
Price: $24.99 on Steam; $29.99 on Switch

Thank you Microids for sending us the review code!

Asterix & Obelix: Slap Them All! is a cartoony beat ‘em up based off of the popular French comic and cartoon series known as Asterix. In this fun allusion to those, you fight for your village against the Romans, but instead of using swords or spears, you put to use the things that you always have available to you: your hands. You’ll smack your way through 6 different acts in this action-packed game.

As I stated, there are 6 acts, with 8-12 levels each. They all take place in a different area, with a different objective in the story. In one, you have to escort a child to his father in Spain while fighting off anyone who tries to stop you. The actual gameplay isn’t changed at all, but these objectives are just motivation to continue playing. In another, you have to gather ingredients for a potion, which I’ll talk about later.

In most levels, you are faced with multiple waves of enemies, occasionally followed by a boss. They are placed at certain points in the level, so your real goal is to find your way to the end of each level while being ambushed every once in a while. If you are defeated at any point during a level, you must restart from the beginning. There is no lives system, so you can try as many times as you like. Also, you can switch between playing as Asterix or Obelix, but if you die as either of them you still have to restart. They each have their own health bar, so if one gets low on health you can always use the other. 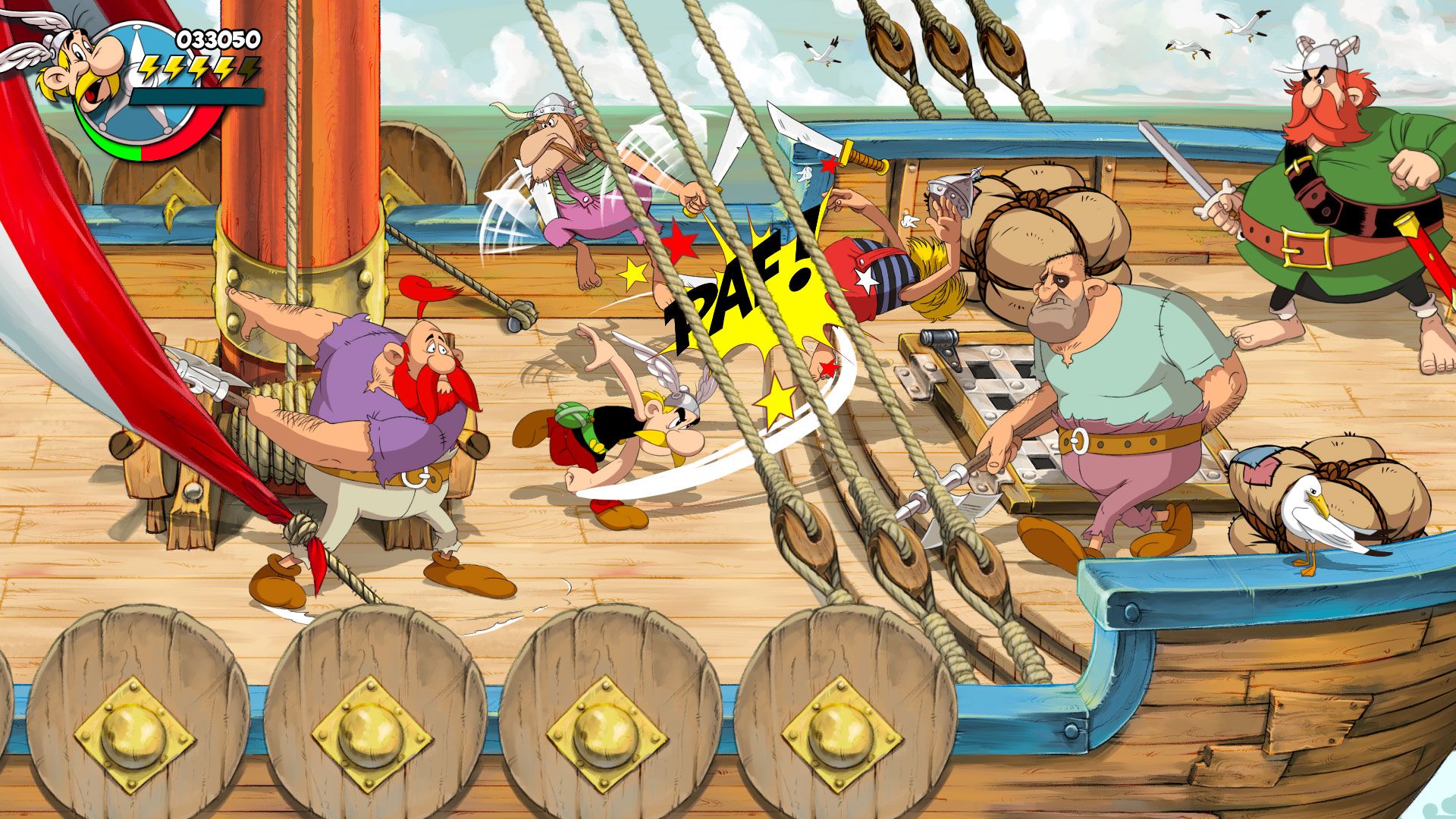 The story of Asterix & Obelix: Slap Them All! is pretty simple, and is as follows: the year is 50 B.C, and our main characters, Asterix and Obelix, are Gauls. The Romans have taken over most of the land, and our duo and their village don’t like that. They have created a potion which can increase somebody’s strength, and it can help a lot when fighting off the Romans. Asterix is pretty small, and when he drinks this brew, he can wipe out a whole group of enemies with just a few slaps. Weapons are unnecessary with this fancy beverage and its insane power, so that’s why you only see the enemies using it.

The art style is one of the better things about this game, as it is very similar to a lot of childrens’ shows, but a little more complex. The backgrounds are very pretty, and the character designs are very unique. The music isn’t amazing, but it fits the time period that the story takes place in. I didn’t notice any bugs or anything like that, and the controls are comfortable. 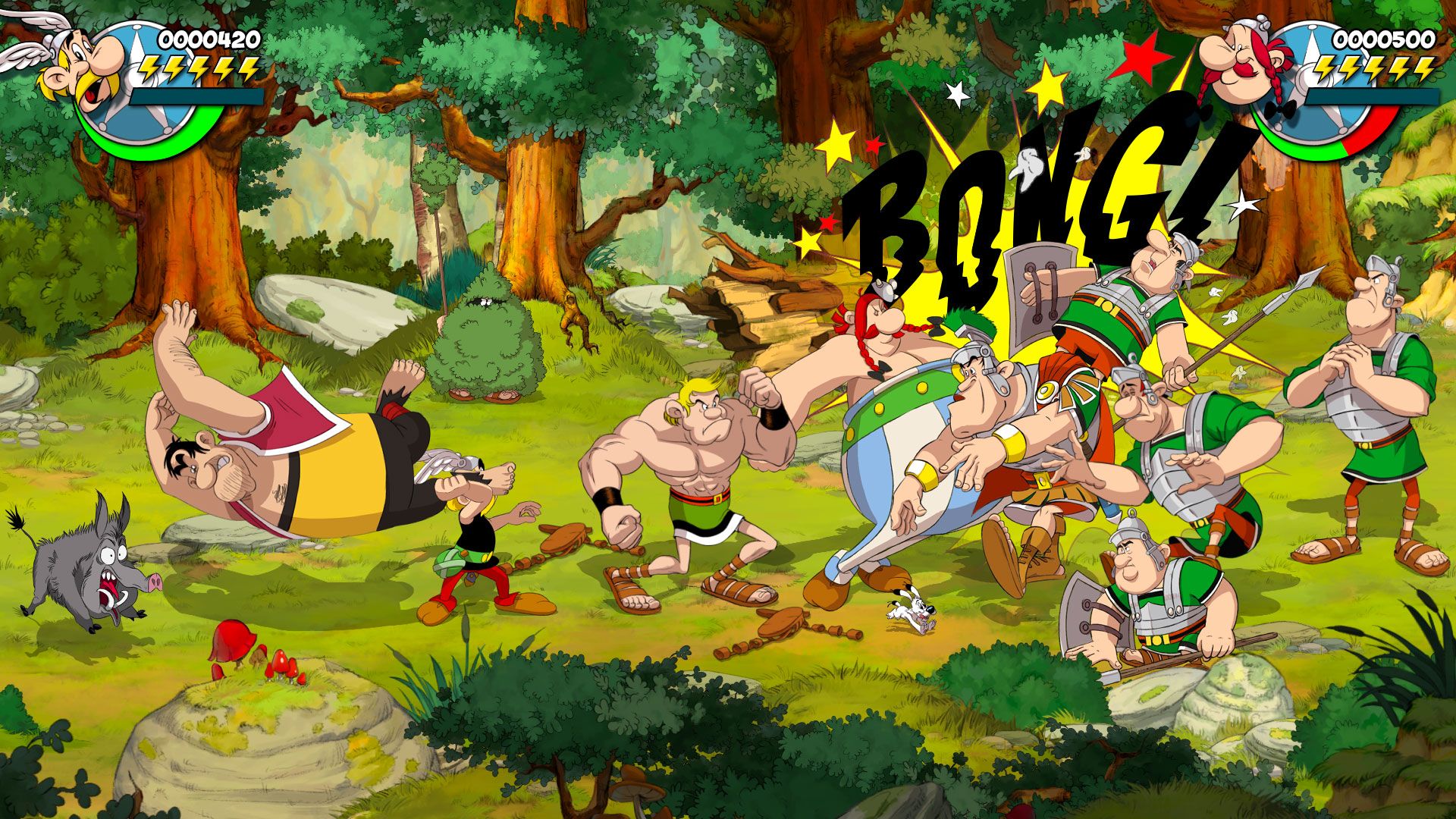 Since I’ve mentioned multiple times that this game contains a lot of fighting, how does it work? It’s pretty simple: you have a few different attacks, which consist of a normal slap, a strong punch, a dash, and a grab/throw. Any attack used will hit every single enemy within its range, making crowd control very easy. You also have an energy meter which fills up when you slap things. This meter needs to have at least one bar in order to efficiently do all of the special attacks that I mentioned (everything except for the normal slap). The button for the strong punch will deal a lot more damage than a typical slap, as well as if you hold the button down while playing as Asterix, you will spin around, damaging everything you ram into. This also saps your energy though, so use it wisely. The dash makes you run at high speeds, launching anybody who unfortunately gets in your way. This uses more energy the longer you use it, but it’s very useful, and refilling your meter is pretty easy to do. The grab is different depending on who you are playing as, and each version is very helpful. Asterix’s grab makes him swing the enemy over his head for a while, whipping anybody who comes in close proximity with him. Once you run out of energy, he throws them, sending loads of damage throughout the crowds of enemies, bowling style. Obelix’s grab makes him pick somebody up and carry them for a while, until you tell him to throw. If you attack while Obelix is carrying somebody, he will repeatedly smack them until they have been eliminated. This is dangerous to do in a big crowd though, as he is very vulnerable while doing this. The best way to use it in my opinion is to use it on one of the last enemies on the screen to quickly deal with them.

Morally, this is pretty family friendly, as it was originally a comic targeted towards a younger audience, but of course it isn’t perfect. It obviously has quite a bit of violence, as the main objective is literally just to smack the Roman army. As you may have picked up earlier, it has some minor magic usage, as brewing potions is usually classified as witchcraft. This special brew isn’t like the typical potion though, as it uses lighthearted ingredients, such as clovers and other things of the sort.

I would recommend Asterix & Obelix: Slap Them All! to anybody who enjoys beat ‘em up games, but this one is a little bit repetitive and doesn’t stick out too much compared to others. But, if anything in this review has interested you, go check it out. You might want to wait for it to go on sale though…