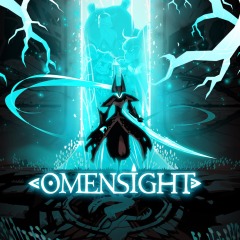 Thank you Spearhead Games for sending us a review code!

The apocalypse is near, exactly 24 hours until the dark god Voden consumes the world. 300 years ago, Voden was sealed into the Kladen sword by Yarbog. The world of Urralia is once again torn by war, and desperate actions have caused Voden's seal to break and threaten all of life. In dire situations such as these, the Harbinger appears and attempts to right what was wronged and reverse the world's bleak fate.

Omensight, by Spearhead Games, is an action-adventure murder-mystery starring anthropomorphic characters. You play as the Harbinger, who once again must find the root cause of the end of the world. The entire plot takes place in a single day, and the Harbinger must constantly go back in time to experience different perspectives that lead to Voden taking control of the world of Urralia. Throughout the journey in time, the Harbinger will interact and learn about five key figures: Draga, a feline who is the general of the Pygarian army; Indrik, the tyrannical bird-emperor of Pygaria; Ratika, the mouse leader of the Rodentia army; Ludomir, a bear who is struck with grief and out for revenge against Indrik; and Vera, the Godless-Priestess whose murder is the cause of the end of the world. All five characters have a part in this murder-mystery and only learning about their motives will bring the mystery to light, and is the key to stopping Voden.

As the Harbinger goes back in time and learns more information, she later gains the ability of Omensight, the power to pass on visions of the past to others. Granting these visions to the characters you interact with may possibly make events play out differently than they are supposed to, gaining even more information on what happened to Vera, and what caused Voden's seal to break. All of the characters have their reasons for doing the things they want to do, and not everyone is whom they seem to be. Memories are also scattered throughout the levels, presenting even more lore on the characters and the world. 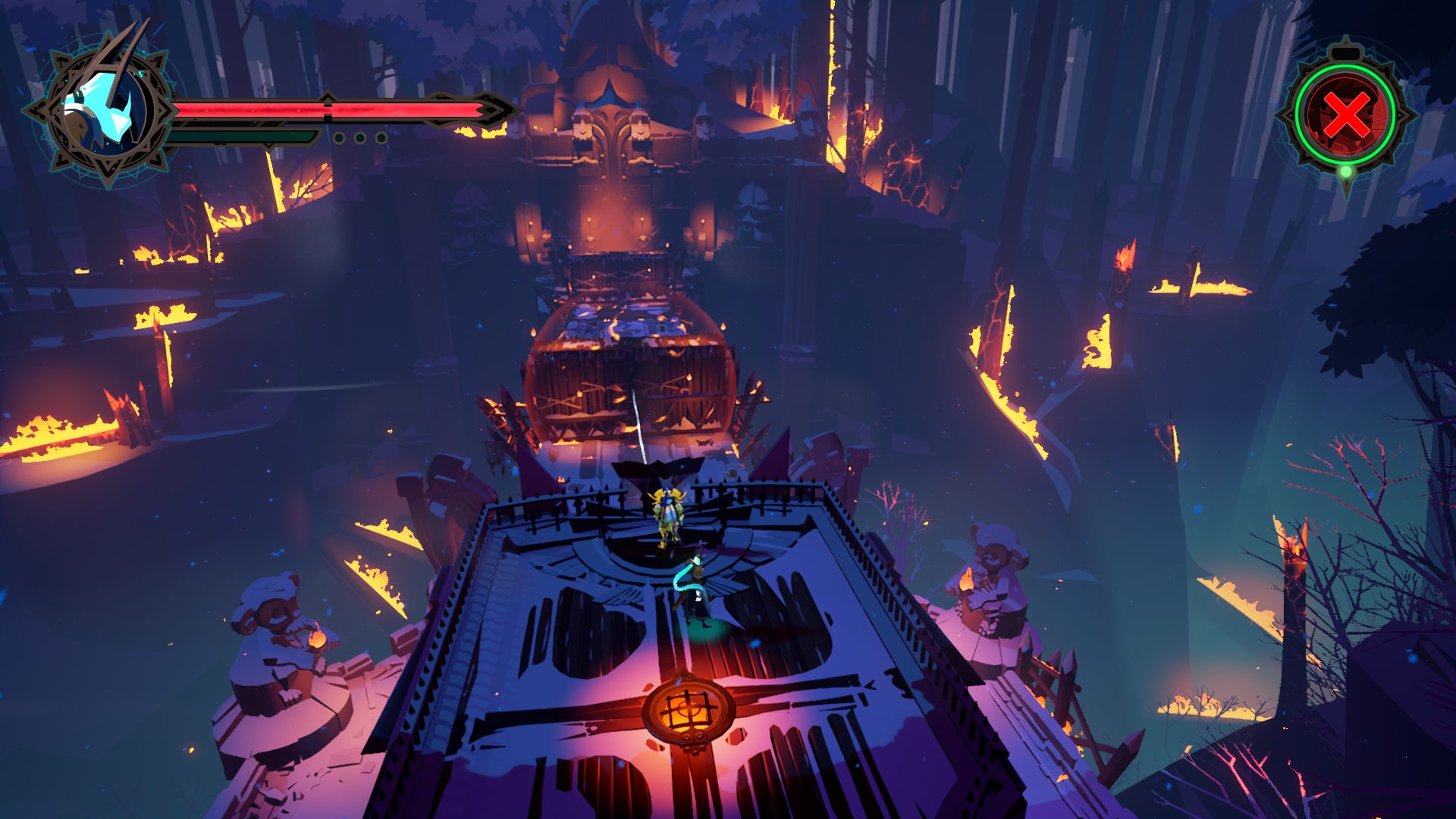 Strong Points: Wonderful art style; engaging story and interesting characters
Weak Points: Gameplay can get repetitive due to how the narrative is presented
Moral Warnings: Murder, violence, and blood shown throughout; story takes place in the middle of a war; one character is typically seen drinking and is called a drunkard; polytheism is present as many characters say "by the gods" or "oh my gods"; most characters are of a neutral alignment so they tend to make a few unethical decisions, including the Harbinger herself; one character's moniker is referred to as the "Godless-Priestess"; multiple characters use magic, possibly powered from the respective god or gods they worship; a cult is one of the factions present; use of language such as d**n, a*s, hell, b****rd, and one instance of sh**e (spelled the British way); some enemies and allies come in the form of spirits

The combat of Omensight is fairly simplistic, feeling similar to the Batman Arkham series. Light and heavy attacks are executed by the square and triangle buttons respectively and can be chained together in increments of three. The cross button is to jump, and the circle button is to dodge attacks. Combat flows well together with responsive controls and how the Harbinger weaves through enemies. Like the Arkham games, whenever enemies attack, an exclamation point is displayed above their head, giving you the opportunity to dodge. At the end of the day, the Harbinger returns to a hub point where she can level up from the experience gained from defeating enemies and opening chests, or upgrade her equipment with amber collected throughout the day.

As level-ups occur, the Harbinger gains extra abilities that are used by the triggers and bumpers, such as slowing down time in an area around you, or the ability to grab enemies or objects. You can combine these abilities in clever ways to gain bonus amber. Aggressive play is encouraged in Omensight as a mechanic heavily relies on it. In combat, there is a gauge that fills up whenever the Harbinger attacks or successfully dodges attacks; likewise, the gauge decreases whenever the Harbinger is attacked or is out of combat. Certain abilities that the Harbinger gains through levels use this gauge, such as firing energy balls, or instantly slaying your enemies in a swift movement.

I do admit that the overall combat does a great job in feeling fluid and powerful, but it is harmed by the repetitive Groundhog Day nature of the narrative due to its simplicity. Simple gameplay and combat in itself is not a problem, but when you experience similar scenery and enemies—it becomes more of a flaw than not. Even though there are multiple factions that you come into conflict with, most enemies feel very similar to each other, with one or two enemy types that are unique in each faction. The repetitive combat is not helped by traversing through the same set pieces multiple times. Typically, many action games would mix it up with platforming or puzzle segments, or even different weapons for a change in combat, and Omensight doesn't offer much outside of action and dialogue. Most of the time, outside of beating up mobs of enemies and walking through set pieces to get to the next fight, there is only a handful of the aforementioned. In my opinion, the combat ends up being Omensight's weakest feature.

On the other hand—the graphics and art style are really something else. Omensight takes a cel-shaded approach and reminds me of a mix of the Sly Cooper series and Furi, due to the way Omesight uses anthropomorphic characters and the general use of color. The Harbinger herself is a very appealing character visual-wise, and also looks the most human-like. She even gains pieces of armor on her character as she progresses through upgrades. The set pieces, even though you will come across them more than a half-dozen times, all have a great variety between each other. The levels themselves almost look like they were ripped from a canvas itself. Spearhead Games did a fantastic job with the use of lighting and shadows, given how small their development team is, seeing as they used low-poly textures for the environment and characters.

The sound design and music aren't meant to stand out on their own—but rather complement the world. The score is gentle in situations where conversation and exploration happen but picks up in intensity when the stakes are high. Unlike many indie games, Omensight is fully voiced. Every word of dialogue within the main plotline has a speaking role attached to it. For me, whether a game has voices or not doesn't matter to me, but the acting is good in my opinion, outside of a couple of phoned-in performances. My personal favorite lines were when the characters would interact with the Harbinger. They would make commentary if you roll too much or spend lots of time breaking boxes. For the latter, some of the characters would find your antics rather humorous, and others would be annoyed—especially when the situation gets more hectic.

One aspect that I found rather interesting is how Omensight separates difficulty settings. The difficulty is segregated by combat and by narrative, giving the players the choice on how they want their adventure to role out. If you want combat to be a challenge, but don't want to think too hard about the mystery, you can set it as such where the narrative will give you hints periodically instead of having to remember the clues yourself. I would like to see this type of balancing in other games and hopefully in Spearhead's future projects as well.

As Omensight begins in the middle of a war, there is a lot of violence and murder present. In the Harbinger’s case, she likes to split her opponents in half either horizontally or vertically. However, any innards are instead depicted as blue light, similar to how the Harbinger looks. Blood is either shown in small amounts in combat, or in a pool of blood in some scenes. The character of Ludomir is usually depicted as a drunkard, and you are even introduced to him back in time with him drinking his sorrows away at a bar. Because of his state and aggressive nature, he also delivers most of the language presented in Omensight—from mild swears like d**n, hell, a*s, and stronger swears like b****rd and one instance of sh**e. The world of Urralia is also a polytheistic world, with the characters worshiping multiple gods. The character of Vera is also at times referred to as the "Godless-Priestess." In many cases, the situation isn't of a black and white morality as it is more of a black and gray morality. These characters are very flawed individuals and will take drastic measures to try and make things right, even if they have to go against laws and authority to do so. The Harbinger, in particular, is arguably the most neutral character in the game, as she only cares about removing the imbalance of the world, which is Voden. She is seen as more of a force of nature instead of a character as every inhabitant treats her as a big deal (as long as she is able to prove she is the real Harbinger). Sometimes, spirits are seen throughout the game as the Harbinger can come into contact with them. In general, Omensight has a lot of morally questionable aspects to it.

Originally released in May, patch 1.04 and the Switch version in December marked the release of the Definitive Edition, unlocking an alternate ending and the option to replay previous days for things you may have missed out on. The alternate ending was made for people who were dissatisfied with the original ending. I personally prefer the original ending as it matches the general tone that the writers were going for. Even though the gameplay itself was a bit too repetitive for me to truly enjoy, the anticipation of what happens next, as well as the motives of the characters kept me coming back to finish it. Omensight takes great pride in its story, visuals, and voice talent, with the gameplay serving as a compliment instead of the driving force. With how the world of Urralia presents itself, it could only work as a video game and not anything else. Omensight makes me appreciate video games more as a form of media for the way they can present ideas to an audience. I really enjoyed seeing the characters and their motives, even if there are a few plotholes here and there. It does have a lot of questionable moral aspects to it and the general tone is suited for a more mature audience. Omensight mostly appeals to people who adore narrative in their games. In being just under 10 hours for $20, it is a nice price for the amount of content, despite the repetitive nature and little reason to replay. If Spearhead Games can just fine-tune the combat in their future endeavors, they may just create an amazing product one of these days.