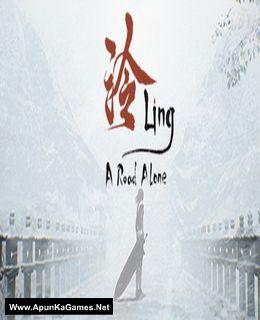 Thank you to Winking Entertainment Co. and Cheese Games for sending us a review code!

Ling: A Road Alone is the perfect title for this game. Gamers expecting any deviations such as talkative NPC’s or helpful sidekicks with special abilities will have their hopes quickly dashed. Ling, the titular protagonist, is alone in a desolate world with only his massive sword to keep him company. Over the course of the game he’ll traverse a barely beaten path through snow, forests, and a desert, searching for… whatever it is he’s searching for. The game isn’t clear on Ling’s destination, why he’s traveling, or why he starts out in a tiny hut on a snow-covered mountain. But there are plenty of great games offering a visually immersive experience that tell their stories through gameplay and atmosphere: What Remains of Edith Finch, Journey, and Hyper Light Drifter to name a few. Ling: A Road Alone is not one of these games. Despite a few moments of visual flair, the game is crippled by blurry and uneven graphics, an underdeveloped and frustrating combat system, and no sense of discovery in a game that seems designed to promote just that.

First off, I didn’t know exactly when the game started because there were no indicators it had begun. There is a grainy and blurred cutscene depicting something moving through a forest (I originally thought this was just another developer/publisher animation), followed by a dissolve to a shaky camera capturing a tiny hut in the snow. I waited for a title to display or a “new game” option but nothing happened. I eventually just pressed X and then the camera switched to a top-down view of Ling outside the hut. There were no prompts for me to do anything so I just intuitively moved Ling forward and started pressing buttons to see what happened.

Combat in the game is hack and slash style. I found the controls in the pause menu and learned that there were 3 basic moves: a sword slash, a punch, and a dash. There are multiple buttons mapped to each of these moves so any given player can find a button set that works for them. For both the sword slash and the punch, there are 3-hit combos if the corresponding buttons are pressed three times in a row. Sword swings are very slow but cover almost 270 degrees of area around Ling. If they seem particularly loud, check your Sound Effects settings. Mine were set to max volume. There is no stamina bar, so you can dash over and over with only the move animation time restricting speed. Once I felt comfortable with the controls I started down the snowy mountain road and quickly began to notice my biggest issues with the game.

Graphics are definitely this game’s weakest feature. When you are alone in the wilderness it’s nice to have something pretty to look at, but what little exists in the environment is generally blurry and doesn’t feel alive. Tall trees and rock formations often melt into the top-down camera view and turn into splotches of black or grey. There is little detail on Ling and it’s hard to tell what he looks like. The game’s lighting simply doesn’t add the contrast needed to give complexity to the environment or help to distinguish actions in combat. When Ling is hit during combat or punch-stunned (I’ll explain this in a moment), the entire screen becomes a reddish grey, adopting a film grain look that blurs Ling’s and the enemies’ health bars. This does nothing but make it harder to see what is going on.

There are also certain spots in the game where Ling is meant to find a scroll. There is no indication of what to do at these spots other than some sparkles and a sword stuck in the ground, but with the graphics as muddy as they are I struggled to see these spots on more than one occasion. It is also especially hard to see highlighted text when opening the pause menu. I’m not sure why the developers decided to make a selected menu option just a slightly brighter shade of white than it was before it was selected, but the snowy environment during the game’s beginning exacerbates this issue even more. Submenus follow the slight highlight pattern, so I generally tried to navigate the pause menu as little as possible.

There are a few areas of success I want to point out though concerning the game’s graphics. I really appreciated Ling’s look when he was obstructed from view by an object or land formation. He became a white silhouette, oddly making him easier to see in these moments than any other time. When the game is paused, the camera focuses on a preset scene from a cinematic perspective and ditches the top-down style. These scenes are nice to look at, with better lighting and composition. There are also 3 big moments during gameplay where the camera switches to this cinematic view as Ling crests a mountain peak or stumbles upon a moonlit field on fire. I wish there were more of these moments because these shots were gorgeous.

Outside of those 3 big moments, the rest of the game involves Ling running into enemies as he embarks on his journey. Most enemies are fast and rush up to Ling in order to attack. In order to stop incoming attacks, Ling must anticipate enemy movements and swing his massive sword to knock them back; he can also make use of the aforementioned punch-stun. The only hint the game gives to promote successful combat encounters is a one-enemy tutorial regarding the punch-stun mechanic. By punching an enemy exactly as they rear back for an attack, Ling effectively stops their movement and powers up his own sword for three strikes. The punch-stun is the most satisfying move in combat, provided you can actually get one to connect. When it does connect, the screen flashes bright red and blood spurts out the back of an enemy in spectacular fashion.

Relying on the precise nature of the punch-stun as the go-to combat mechanic is a problem because there is no way to lock-on to an enemy. If enemies were bigger this would be less of an issue, but since the top-down camera seems placed quite high above the action, almost all enemies are Ling’s size or smaller. The floating head enemies and the weird dog-like monsters are tiny. Forget hitting them with a precisely aimed punch-stun, I couldn’t even tell when their rear back animations were half of the time. Thankfully there isn’t a huge variety of enemies so getting used to their attack movements doesn’t take long. But no lock-on option and a difficult punch-stun makes combat feel clunky and frustrating throughout the game. Nowhere is this more evident than the final fight.

In the culmination of Ling’s journey, he must fight an echo of himself. His first phase isn’t too difficult if you’ve managed to make sense of the punch-stun. His second phase, triggered when he drops to 60% or so on health, might possibly make you dizzy. The echo flies around with incredible speed and primarily punches at you. I did confirm that it was possible to punch-stun him in this phase but connecting it was next to impossible. Contrarily, the echo confirms his punch-stuns with extreme ease; he follows these up with sword attacks or more punches that drain your health and restore his. You cannot out-maneuver him, he moves far too quickly. Your only hope is to constantly mirror his dashes (an ironic touch that would be impressive if didn’t feel like your eyes were slowly crossing from concentration) and swing your sword once or twice as he rushes to you. A minute’s worth of work on his health bar can be undone if he catches you with a single punch-stun. This fight intends to stretch the limits of combat technique but only ends up reinforcing how unreliable most of the mechanics are.

I think Ling’s story is supposed to be one of self-discovery but it isn’t presented in a dynamic way. At certain points during Ling’s journey, some text will appear at the bottom of the screen making a ponderous observation about the environment. Scrolls that Ling finds contain short poems or stories that may or may not be related to his feelings. The game ends as it begins (literally the same cutscene) with no sense that Ling has changed or that he has been affected by his loneliness. Although some beautiful soundtrack moments attempt to wring some emotion out of the more reflective parts of Ling’s journey, the game is mostly silent elsewhere. Effective silence can speak volumes; the game’s silence feels more like it has nothing to say.

There are a few morality concerns to discuss. Slicing or punching enemies causes black blood to spray everywhere. The same happens if you get hit. A few of the enemies are particularly gross. One of the bosses is a necromancer of some kind that throws waves of eyeballs at you. Others include some floating heads with matted hair and some zombie-like walkers. There is no language I encountered but some of the scroll writings might be graphic to some. One in particular describes a man’s body in detail, not in a sexual way but simply from an anatomical perspective. These scrolls and various statues in the game seem inspired by Eastern religious philosophy, possibly Buddhism. The name “Ling” is actually an English pronunciation of a Chinese written character, which can mean “coldness” or “wither” or “cool”.

Once completed, Ling: A Road Alone features three harder story modes to play and more scrolls to find. I have a hard time recommending that anyone play this game for that long though. Developer Chautauqua Software has a few gems with this game that they can recut and polish for future titles, and hopefully they move forward from this work. For all of its self-searching, Ling: A Road Alone spends too much time wallowing in isolation and fails to welcome the player into the experience.