Thank you Easy Roller Dice for sending us these dice to review!

There are many colors and brands of tabletop gaming dice out there.   Most dice are made out of plastic, but there are metal variants available as well.  The metal ones are three times as expensive though.  Starter dice can be obtained for fifteen dollars or less on sites like Amazon.

This review is based on the Purple Dawn 7 Piece Dice Set.  This set includes a velvet carrying pouch ($5.95 value) that can hold up to twenty-one dice.  This seven dice set includes:

Along with this set of dice, we also received the ten-piece purple translucent dice set and the Wyvern reversible large dice bag.  The large bag is high quality and made with microfiber and velvet.  It can carry over two-hundred dice, no matter what brand they are!  Since I don’t want to compare the Easy Roller Dice against each other, I’m going to use my son’s seven-piece teal translucent Chessex dice set.

Chessex has been around longer than Easy Roller Dice and they have an impressive catalog of low-cost dice out there.  Their dice are cheaper than Easy Roller’s, but their quality isn’t as good.  While both dice sets have decent paint jobs, I have to give the nod to Easy Roller’s since some of the paint is a little thin on the Chessex.  The translucent dice with the white have a nice contrast and it’s easier to read the numbers compared to the gold and purple set.  The Easy Roller dice are slightly bigger in size (16mm to be exact) and felt heavier in my hands.  Unfortunately, my food scale isn’t sensitive enough to detect a weight difference between them. One last thing I’d like to mention is that the Chessex dice use a marginally larger font for the numbers making them even easier to read. 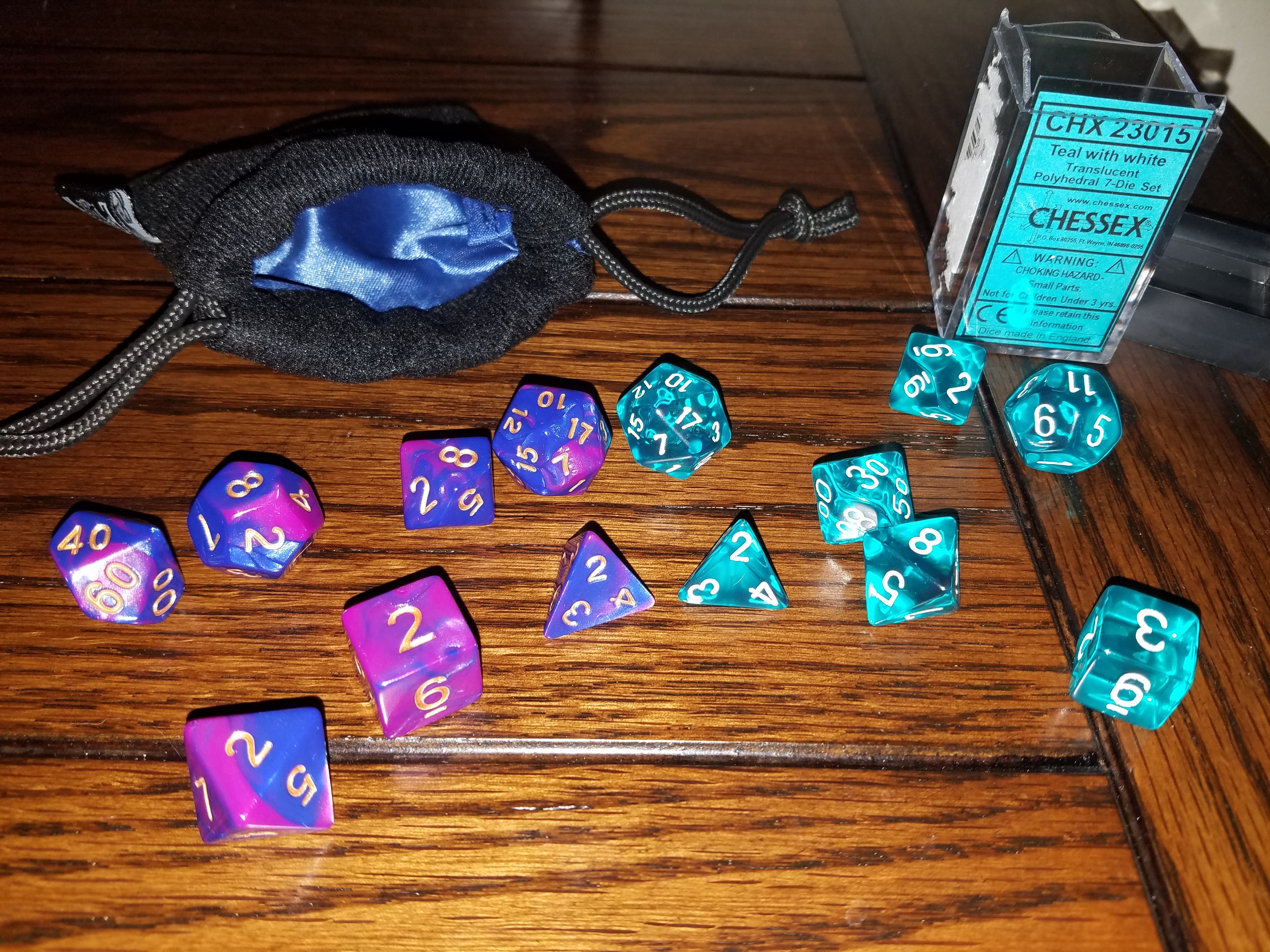 The Chessex dice set comes in a plastic carrying case that arrived cracked on the top.  The dice themselves have a couple of scratches out of the box as well.  Easy Roller Dice hand inspects their products to make sure they are defect free. They stand behind their products with a thirty-day money back guarantee and will replace any damaged dice at no cost to the buyer.  I doubt this includes bad rolls in tabletop games though.

In the end I prefer the Easy Roller Dice over the Chessex Ones.  They feel better, have given me some good rolls, and the carrying pouch is really nice.  I'd rather have a velvet pouch in my pocket than a rectangular plastic carrying case.  The price difference is only a couple of dollars and is well worth it in my opinion.  My kids have claimed these dice and when I’m in need of some more, I’ll be sure to check out Easy Roller’s offerings to help fill up that large carrying bag we received.