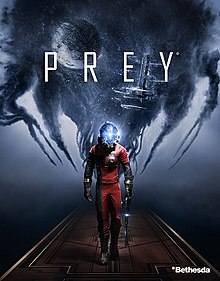 The game Prey can only be defined by the word…. trippy. You are Tommy, an American Indian who can wait to get away from the reservation he has been stuck on all his life. You get your wish. The shooting is standard fare but the weapons are very much alive! The “grenades” are spider-like little buggers that you “arm” by ripping off their legs, your sniper rifle has a snake like attachment that connects to your eye, and one heavy weapon is a boss’ arm. The gravity (if not the gore) is sure to toss your stomach; you may find yourself on the ceiling when you walked out of the last room on the floor. The portals that open up with the arrival of Hunters (stock enemies) are amazingly fun to toy with do to the fact that if you get behind one you don’t even see it so you can just wait for a hunter to pop out and nail him in the back. The spirit-walking element of the game revealed by your Cherokee roots is nothing special, its main use is to let you solve puzzles and throw switches. When you “die” you go into the spirit realm and have to shoot wraiths to regenerate your health which gets old very fast, but even if you don’t bother shooting any wraiths you will still return to the came to the game with partial health. AI wise there was nothing entirely special, they took cover and tossed “grenades” at me, the sniper fire was very easy to avoid due to the fact that the sniper rifle emits a red laser that shows right where he is aiming. (think Half Life 2 rockets) The boss fights are standard FPS bosses with no new elements thrown in, although (SPOILER ALERT) you do take cover behind a force shield which then breaks but as the boss sticks his arm through the hole you can reactivate the shield chopping off one arm and claim it as your own… gun…. (END SPOILER). In the end you are left wanting more action due to the fact that the game is approximately four hours long, but being able to replay the game in Cherokee mode (a.k.a. Legendary for you Halo people) adds a few more hours to the mix.

Prey ran “beautifully” (gorily/juicily/ect) on my mid range system with a GeForce 6600 card with all the graphics cranked to maximum with minimal lag. The lighting effects were beautiful with the way the ammunition glowed in dark places and your lighter shines into the dark. The particle effects where limited but still beautiful, and steam and liquids looked quite realistic. The actual human models looked a bit odd at times in certain postures but overall looked decently realistic (they put the majority of the bump mapping into the faces, so ignore the bodies and it will almost look like a good Pixar film). The monsters were all a biomechanical mess with shining metal sticking through the fleshy areas. Weapons looked very nice and… alive…. They all had heavy-duty bump mapping and the lighting in a room would cast proper shadows on the gun. While in spirit walking mode the graphics stay the same but everything is well lit and in a smokey blue haze. The land of your ancestors, which you make several visits to, blew me away. The rocks and mesas looked incredibly realistic (provided you don’t focus on seams between walls and floors too heavily). They were the most realistic real life based scenery since Oblivion in my book, although the point where you can look into the horizon looks a bit painted. All in all the graphics are quite up to par with today’s heavy hitters.

The sounds of prey are a blur as you go blazing through the depths of the alien vessel but a few key things stand out. There is creepy ambient noises all around, people screaming, children crying, and Tommy comments on particularly creepy or awe inspiring scenes. The Hunters sound a bit like Elites from Halo (even when you spirit guide translates it to English for you), and the snarling of the cannon fodder beasts is a bit like dogs and a hyena. The weapon fire sound effects are standard fare as far as shooters go, although hearing your “grenades” make this little shrieking noise instead of the standard beep or boom is unsettling. The sound placing and distancing is excellent, if you shut your eyes you can still home in on the source of the sound and tell how close you are to it. The voice acting is “good” by videogame standards. They still cant get convincing voice actors sadly, all games have the overexcited actors who try to put way to much energy or urgency in their voices, or fulfills perfect stereotypes. But as I said Prey is good as far as games go. The original musical score by the guy who did Oblivion is a major bonus, it adds to every type of atmosphere they throw at you in the game. And as the credits roll they play a great indie rock song that blew most people away*.

Dare I spout this horribly pun of a name for what the designers call MultiPrey… Yes I know its bad… But playability wise its quite fun having all the guys who kicked your butt at Counter-Strike moving slowly and carefully along a corridor as you run up on the ceiling and blow them away with your choice of any gun from the game. Some innovations just for MultiPrey… are: a complex where each trench and hole has a different center of gravity, a map where the entire room is full of gravity switches so you cant ever depend on cover, and the fun ability to sit behind a portal (when your behind the portal you see through it as if it wasn’t there) and blast any poor soul who dares step through. The main flaw with MultiPrey (besides the name) is that with all the gravity switching the game will tend to lag with about 6 or more on a map (possible 18). But it does provide solid fun for a few hours. (XBOX 360 guys ignore this, this is for PC)

Killing non-human, fictional beings (-3.5 pts) Blood sprays on the wall and everywhere else (-2.5 pts) Body parts can be visually unattached (-1.5 pts) Swear Words found in a R-rated movie are used in the game (-5 pts) Partial Nudity (-4 pts) Game takes place in an environment with minor occult references. (-3 pts) Im iffy as to whether the Cherokee lore is minor or majorly occult) I feel its minor as it only has “Spirit walking and the Land of the Ancestors” Occult magic is used by player. (-5 pts)

*according to the band’s website, and I for one loved it (but that’s because I was a fan of the band before hand so I’m severely biased).
FPS