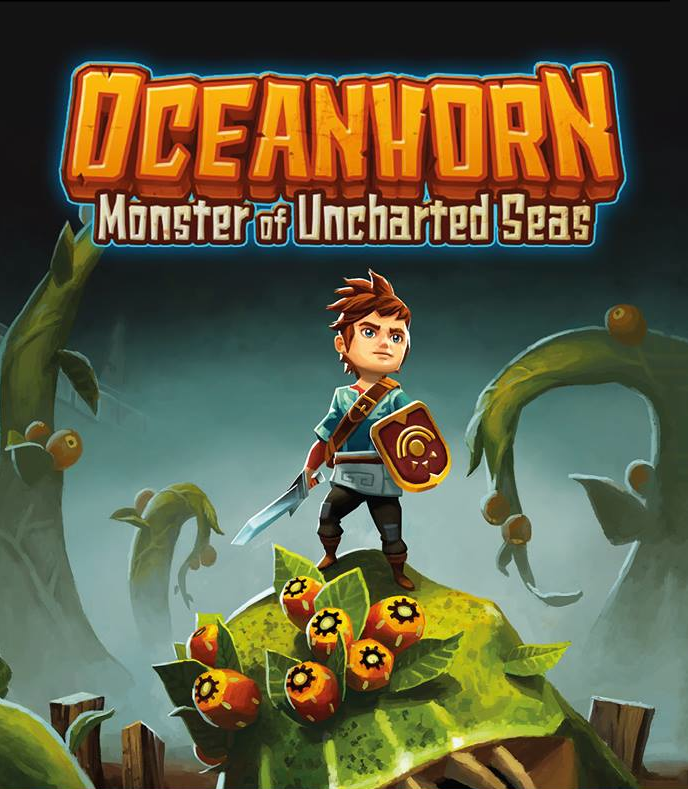 Thank you FDG Entertainment for sending us this game to review!

Oceanhorn: Monster of the Uncharted Seas was originally released in 2013 and has sold over a million copies since. The fact that it’s available on every current gaming system has something to do with that. The positive reviews and homage to Zelda are two other reason for its success. Fans of The Legend of Zelda: The Wind Waker will find much in common, though I will be upfront and state that I have not played a Zelda game since the original two on the NES. With that said, I did enjoy my twelve hours into this title and wouldn’t mind playing Wind Waker if the opportunity arises.

In Oceanhorn you play a nameless young man whose parents are gone. The father hasn’t returned since trying to battle Oceanhorn, but he left behind his notebook as a guide. The mother passed away and the main character is in possession of her pendant. The pendant has a mind of its own and guides him to a cave where he’ll find a sword and a shield. Until then, he can throw vases at enemies to defend himself.

A hermit on the island shares the story of Oceanhorn. The Islands were the mighty kingdom of Arcadia. The age of enlightenment led Arcadia to amazing scientific discoveries as engineering and magic came naturally to them. A dark mage, Mesmeroth, led a war against Arcadia. Three sea monsters appeared, one of them being Oceanhorn. Since the father hasn’t returned, it's now your job to seek it out; staying on the island is endangering the inhabitants as monsters are attracted to your mother's pendant. To unravel the mystery of Oceanhorn you must discover the secrets of the three sacred emblems (Earth, Ocean, Sun). You’ll also need to upgrade your sword and shield before facing this sea giant. 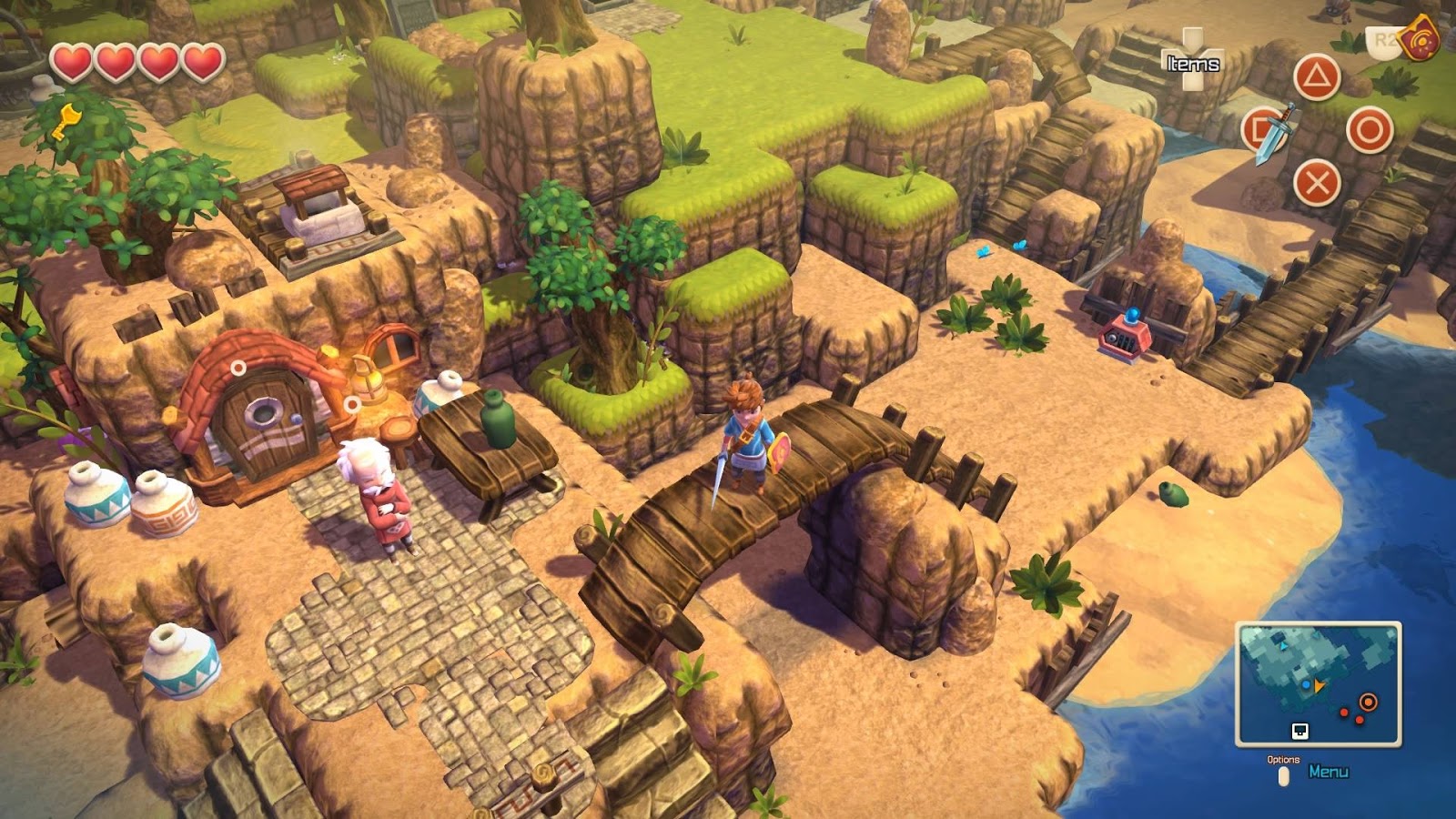 Strong Points: Fun Zelda-like game with plenty of dungeons to explore and puzzles to solve
Weak Points: Can be beaten in less than twelve hours; got stuck once
Moral Warnings: Fantasy violence; magic use; numerous deities you’ll interact with as you collect various emblems; undead enemies

In the beginning, you have four hearts and they each take two hits before depleting. If you chop up some plants and break jars, you may find gold coins, bombs, arrows, magic potions, or hearts to replenish your health. Many islands have heart pieces to increase your maximum health and blood stones that needs to be mined to unlock a powerful spell. Be sure to comb over every island and you can buy a radar to let you know how many secrets remain on an island. It doesn’t take long before you acquire a boat that enables you to explore the next island. On Tikarel Island, you’ll have the opportunity to vanquish a rat in a cellar. Blue diamonds are awarded for each slain creature and this experience is used to gain levels and earn abilities like holding more bombs and arrows.

Be sure to talk to all of the villagers as they may give you a useful item or information on other islands to visit. Once an island is mentioned, it becomes available to sail to from the world map. When you’re sailing, you’ll have to aim your pumpkin seed shooting gun at monsters, bombs, and other debris in your ship’s path. At docks, you can go fishing and compare your catches against other gamers on the global leaderboards.

Many of the dungeons follow the same formula where you have to collect regular keys until you can obtain the master key which opens all of the doors and the treasure chest with the main item inside. The emblems are protected by a boss that has to be defeated before you can take your prize. The bosses have an attack pattern to work around and weaknesses to exploit to secure your victory. If you die in battle, you’ll only be revived with three hearts no matter how many you have unlocked in the game. Thankfully the boss rooms have plants and jars nearby which can yield hearts if destroyed. 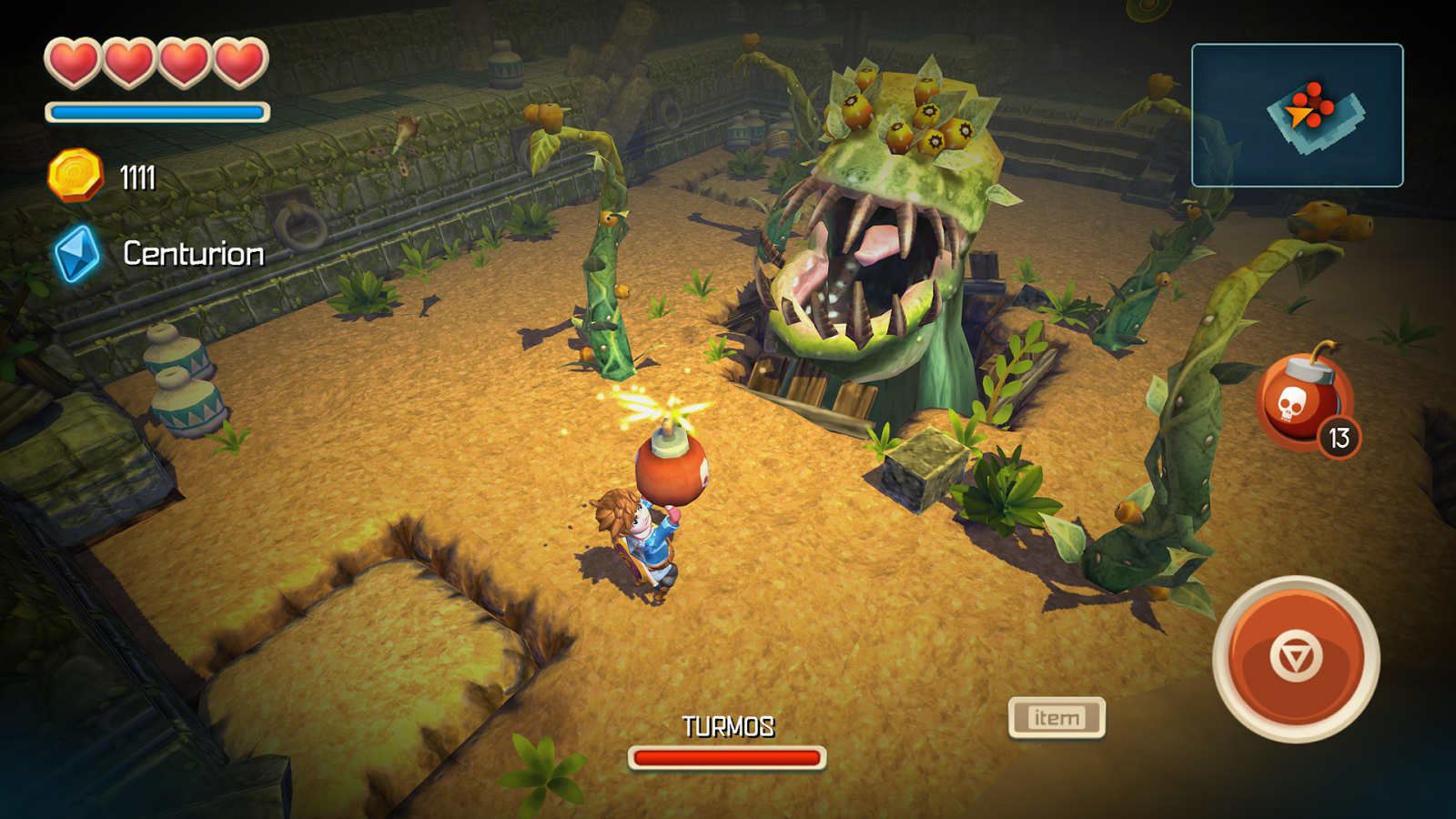 Each emblem represents a god that gives thanks for being purified and lends its power to the hero. The father also makes a reference to Gaia in one of his journal entries. Magic use is required for damaging enemies and solving various dungeon puzzles. Most of the puzzles involve moving crates to certain floor tiles. If you mess up a puzzle there is usually a reset button nearby. One time my character got stuck between crates with no way out. I had to exit to the title screen to continue my journey. Thankfully, there are plenty of checkpoints and auto-saves so not much progress was lost.

Visually, Oceanhorn is very colorful and it looked and ran great on my Vita. I enjoyed the portability and didn’t have to sacrifice much performance in return. Upon reading the game’s opening credits, I recognized Nobuo Uematsu’s name. He’s one of my favorite composers and I enjoy his work in many of the Final Fanstasy games. Not surprisingly, the music is really good in this title. The voice acting is well done as well despite the gods speaking in gibberish.

If you enjoy Zelda games, then you’ll want to look into Oceanhorn: Monster of the Uncharted Seas. The bosses and puzzles are not too challenging, but there are plenty of walkthroughs and videos available if you get stuck. The asking price is a reasonable $12.99 which is slightly less than the PC version when it’s not on sale.