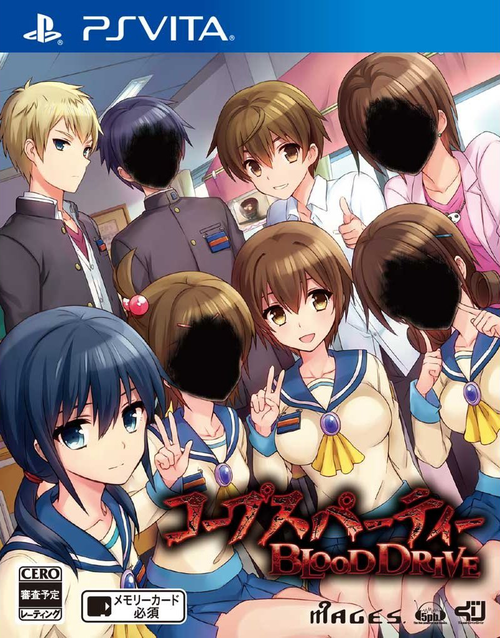 Corpse Party: Blood Drive is the third installment in the Corpse Party series.  It comes after Corpse Party: Book of Shadows and the ending of that game is quickly summarized in the beginning of this one.  It’s best to be familiar with the series before jumping into this 3D chibi anime style survival/horror game.

Don’t let the cute anime graphics fool you as this game is extremely gory and has very heavy occult themes and symbolism.  As you control several party members wandering through the cursed remains of Heavenly Host Elementary you’ll be cataloging corpses to learn their identity and cause of death.  Some are killed in grotesque ways like crucifixion while others have been poisoned or died from fatigue. 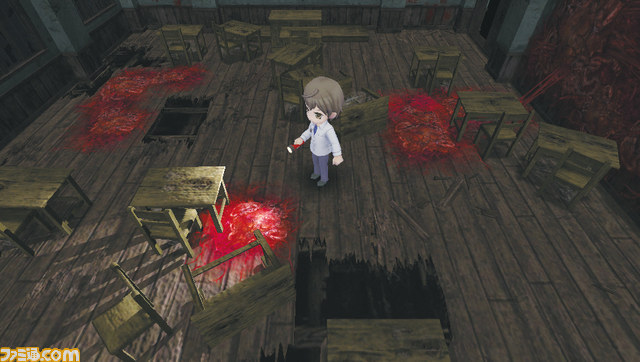 Sometimes the spirits are still lurking about and can give chase. They will kill you if they make contact.  Your options are to hide in a nearby locker or banish them if you have a talisman on hand.  In order to successfully hide in a locker, the spirits must not see you enter it.   Once inside you have to wait until the coast is clear before making your exit.

Pressing the O button will make your character sprint, but they will eventually lose stamina so save it for emergencies.  The left trigger enables the flashlight which is vital for detecting various floor traps like trip wires, shards of glass, tentacles, pitfalls, weakening wood and spikes of wood.  By default, the flashlight’s battery will drain after a while but pressing the select button will put the flashlight in an unlimited mode (at the cost of an achievement).  If there are multiple characters in your party, they can be toggled by pressing the right trigger.

Candles can be found throughout the levels and are used for healing as well as saving the game's progress.  I highly recommend using them whenever you find one!  There are often long story/visual novel like sequences between saves and multiple bad endings are a possibility to cause you to lose a good chunk of progress.  I did experience one fatal crash that caused my Vita to power down while playing this game. 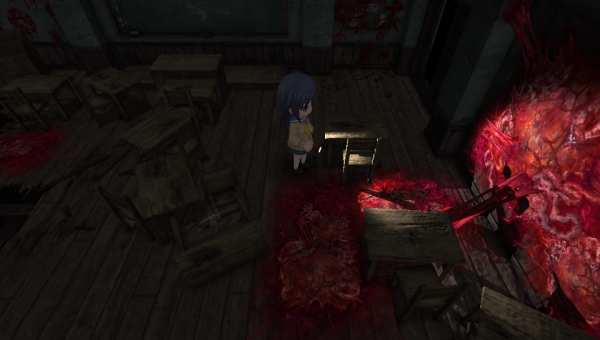 The dialogue is good and the character development is great.  All of the dialogue is in Japanese and it can be a learning tool to learn all of the naughty words in the English language!  Some of the colorful phrases include sh*t eating grin, b*tch, b*stard, d*mn, dumb*ss, and f*cktard.  The Lord’s name is used in vain for good measure as well.  One of the female character’s wears a dress that accentuates her cleavage while another is shown taking a bath.  Thankfully there was enough steam and bubbles to cover up the necessary body parts.

While there is a ton of occult symbolism and pentagrams everywhere, one of the main characters is seeking redemption and undoing the black magic that banished her friends from existence.  While her motives are pure, she’s only digging herself deeper in the occult by trying to bring them back.  The book of shadows Ayumi is after is also sought by several others who are willing to kill for it. It's a race against time with many traps and dangers, both alive and dead, that stand in the way of Ayumi and her acquaintances.

If you’re looking for a dark survival/horror game and enjoyed the previous Corpse Party entries, then Corpse Party: Blood Drive is worth looking into.  I found this game to be too immersed into the occult for me to enjoy it personally.  It is PS TV compatible, but with the grotesque atmosphere and strong language, this game should not be played around children.  Especially those that can read.