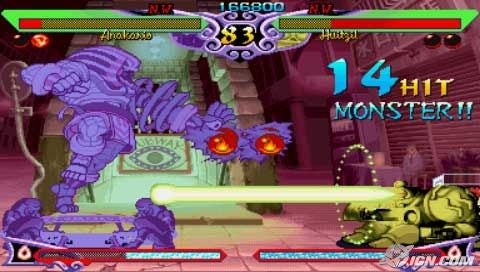 Take control of 18 of this worlds infamous personalities, as you battle to stop the world from begin destroyed. A Fast paced, high action, 2D fighter for the PSP, delivers plenty of action for your pocket.

So good it hurts. There hasn\'t really been a ton of fighters released on the PSP so far, but compared to console fighters, this game is just as full featured and addictive. Basic gameplay is the same as a fighter, hit the person till his/her health meter hits zero. The interesting thing about this game is there is a separate meter, called your ?Special Gauge? that fills up with each hit (it fills faster with combos). After the gauge is filled it allows you to either go into ?Darkstalkers Mode? (which uses one full meter) or some of it will be used if you perform a ?Special move? or an ?Extra special (ES/EX) move? (the ES/EX moves use one full gauge) This is an interesting system. You can fill up your gauge many times in darkstalkers 3 mode, so you could save it up and have tons of ?Special? to unleash on hard characters, or if you play in just the regular ?Darkstalkers mode? then you can only fill it up once. If you haven\'t yet noticed there are TONS of modes in darkstalkers. Darkstalkers (one gauge), Nightwarriors (only one round, but your health meter has to reach empty twice), and Darkstalkers 3 (standard, you can fill your gauge as much as you want) In addition to these game modes, there are also character modes: Darkstalkers 5, Darkstalkers 3, Nightwarriors, and Darkstalkers 3(S.P.) each denoting a different type of move set (Darkstalkers 3 also denotes added difficulty) There are 3 Game Types to Darkstalkers: Arcade, Network, and Tower. Arcade is the same as any typical fighting game, you beat through a set number of characters (in this case six) and then you fight a ?boss? character, who usually is ridiculously harder than any previous characters. Network is the online mode for Darkstalker (Note: I have not played this either through Ad-hoc or Infrastructure, so I cannot comment/review this section, but since there is no voice or chat abilities, game play should not differ in any way) Tower is the most interesting mode of Darkstalkers. You pick your three favorite characters, and battle your way up a never ending tower. after each battle, your characters retain the damage they sustained, so you progressively get weaker, and the characters you fight get progressively harder. Only one character can fight at a time, nut while one is fighting the other two slowly regain health. This creates a good balance between the characters you use, as well as adding in a good bit of stratagey. You need to decide which characters to use when, how much to rest certain characters, as well as when yo use your ?Special? and when to save it. At each fight certain variables may be added. Some stages are ?unlucky? stages where you might not be able to use punches or the ability to use kicks or blocks may be taken away. As well as ?unlucky? stages, certain stages have requirements that allow you to jump stages. Some things that allow you to jump stages are beating the current stage in less then 10 sec, or ending the stage with a Special or EX move. Your progress in this mode is saved, currently I\'ve only beaten 14% of tower mode and yet I\'ve spent hours and hours on it... it\'s insanely addictive trying to move up the tower, there were times that I\'d played some much that, because of the nature of the small space on the PSP, my hands would be aching, and yet I\'d still want some more. There is also a section of Darkstalkers called ?Chronicle? where you can view the ending video from the arcade mode, as well as any illustrations you\'ve unlocked from Tower mode. It\'s not the most interesting stuff ever, but it\'s still nice that it\'s included. Being the only fighter at the PSP launch, as well as being the only ?True? fighter for the PSP for awhile, there\'s not much choice for fighter fans, however, Darkstalker\'s delivers tons of addictive, enjoyable gameplay to the player.

2D\'s never looked so good. Well, the game is in 2D. Most people say ?you\'ve got this revolutionary new handheld powerhouse, why in the world do you make a 2D game for it?? Darkstalkers is the reason. Totally stunning, vivid animations, with lots and lots going on on screen with no slowdowns, no drops in frame rate, and very short load times (long load times plague many PSP games). I honestly can\'t say this game could look very much better than it already does.

Seems as though I\'ve heard this background music before... Redpeditive music, some nice sound effects, nothing that really wows me, but it fits the games mood and setting well.

Solid as a rock. So far I think there was only once that this game slowed down when I unleashed a EX move as well as trying to unleash 2 other combos at the same time. I hardly even noticed it, and this game hands tons of animations with no slowdowns. As far as loading, it takes something like 5-8 seconds to load the game, and 2-4 seconds to load a level, so it\'s FAR lower than most PSP games.

Controls are awful. Control is the most important thing to a fighter, and Darkstalkers just doesn\'t deliver. The problem is that, since it\'s a port, it uses a 8 way control system (up, down, left, right, and four diagonals) when the PSP D-pad only has four. So trying to hit a diagonal on the PSP, you probably have a 30% chance. Generally, the diagonals are used for fireballs, which are VERY important to the gameplay. However, there is an easy mode. It eliminates the difference in the punch and kick buttons, and auto completes some combos, as well as giving you a one touch way to get into Darkstalkers mode, and a one touch EX move. It\'s not really any easier, and it only mildly helps the controls, but it take utterly useless controls that would have otherwise ruined the game, and makes an almost passable control system.

- Killing non-human, fictional beings (Ex. Robots or Aliens) (-3.5 pts) You do kill. Lots and lots of killing. However, most of the people/things you are fighting are already dead... In fact I\'m pretty sure all of them are considered spirits in this game. So you\'re not really killing, but it\'s still REALLY violent. - Small Red Blotches or Drops (-1 pts) When you have a character will claws or a sword, and you hit the other character, a little bit of red ?sprays? for half a second. - Body parts can be visually unattached (-1.5 pts) Jedah has a winning animation where you see a red flash, your heart is pulled out and floats over to him, he opens his chest, and your heat floats into it. He also has EX moves that are somewhat gory. When you ?die? your body falls to the ground (it looks like a costume) and it\'s in two pieces (usually) Language 6/10 pts - Minor Swear Words are used once or twice (-2 pts) Well, they talk about the prince of the D***ed, (Jedah) and about Hell, but as a real place. It\'s generally used in a serious fashion, and ?D**n you? is never used, as far as I can tell. - Sexual references are made once or twice. (-2 pts) This really disappointed me, there are a few innuendo\'s made, and they occur after wining a match, so they are repeated sometimes... also as a note, the game seems to hint at the two female vampires being homosexuals, nothing is said at all, it\'s just kindof implied.

- Characters clothing is sexy or accentuates their sexuality (Ex. tight clothing or low cleavage) (-1.5 pts) The female characters have an abundance of cleavage, but they\'re in 2D... The booklet pictures of the female characters are the worst part, but in general the booklet is not the part that I\'ll be spending hours and hours playing. - No Sexual Content (-0 pts) Occult/Supernatural 3.5/10 pts - Game takes place in an environment that is filled with major occult references. (-5 pts) Okay, games main story (there is no plot in fighters, so I\'m not really giving anything away, but some people might say this is a SPOLIER) has you fighting to get to the center of the spirit (or demon, not really sure if the game makes a distinction) world and stop the most evil one (called Jedah) from taking all the spirits and creating a great evil being that will dominate the world. You play characters ranging from vampires, to ghosts, to robots, to werewolves and mutants. The name for this game in japan is ?Vampire Chronicles.? It\'s a very dark game. Fairy tale type magic is used in game by player. (-1.5 pts) Magic is used sometimes in this game, but it\'s cartoony and isn\'t made out to be anything more than that. Cultural/Moral/Ethical 10/10 pts - No authority issues involved with this game. (-0 pts) - No prejudicial bias in the game. (-0 pts) - No gross humor in the game. (-0 pts) In general, this game is about defeating the ruler of hades, which most characters (thought they are ?infamous?) have a good motive behind. One character was the former ruler of hades (you learn this from the movie at the end of arcade mode), and is trying to stop the new one, but most actually want to save the world from destruction.