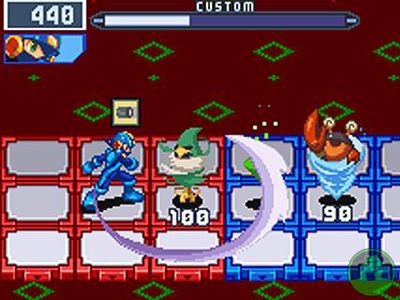 Platform: GameBoy Advance ESRB Rating: Everyone Developer: Capcom Players: 1-2 Mega Man Battle Network isn’t like the typical platform games we’re used to. In fact, it is not a platformer at all; it’s an RPG. In MMBN you play the roles of both Mega Man, and his owner Lan. Lan is just a typical grade school student, but he’s ready to take action when Dr. Wily’s organization, the WWW, starts to terrorize his town. Lan won’t be alone of course, because he never goes anywhere without his sidekick Mega Man. You see, Mega Man is Lan’s virtual ‘PET.’ He is carried around everywhere Lan goes, and has the ability to ‘jack in’ to pretty much any electric device, and travel through the NET.

Playing the role of two characters in two different worlds makes things interesting. You’ll have to switch between the two frequently throughout the course of the game. For instance, Lan’s oven catches fire early on, and Mega Man must jack in to the oven to stop the virus that’s causing it to burn uncontrollably. Other scenarios arise all the time, which require Lan and Mega Man to work together in their intertwined worlds. The battle system is pretty unique. Yes, it is somewhat of a card-battle game, but don’t let that get you down; there’s a lot of real-time action going on. Each battle takes place on a 3x6 grid, with Mega Man on one side, and his enemies on the other. You’ll have full control over Mega Man’s movement and attacks. Battles can get frantic with multiple enemies attacking at once. You’ll have to stay on the move, dodging attacks, while firing back at the bad guys with your Buster Cannon. Of course, it wouldn’t be a Mega Man game without weapon upgrades, and there are plenty of them. These come in the form of ‘battle chips.’ In a fight, you’ll see a power meter steadily filling up at the top of the screen. When it reaches full capacity, you can load Mega Man with up to five battle chips to unleash on the battlefield. There is a wide variety of different battle chips; some are simple cannon upgrades and shields, while others can change the structure of the battlefield to your favor. You only get to choose 30 battlechips to have in your active ‘folder’ at a time, however. This means you’ll have to be a little strategic, and think about what kinds of chips you’ll want to use in any upcoming battles you may face. The entire game took me about 20 hours to complete. If you have a friend with his/her own copy of the game, you can hook up your GameBoy Advance systems via link cable, to net battle each other and trade battle chips. You can choose to play just for fun, or bet chips for the winner to receive after the game.

Mega Man Battle Network is seen through an isometric view. (That is, looking down at a 45degree angle.) Sprites are distinctive and look nice. Everything is sized perfectly to provide a good view of the surroundings while giving attention to detail. Every location in the game stands out from the rest in some way, making it easy to remember where you are in most places. This is very helpful when inside the NET, which can be disorienting.

Music is catchy, though perhaps not very memorable. It changes from location to location, and intensifies when a critical part of the story is revealed. There isn’t a whole lot of sound effects, but the music creates a nice, ever-changing atmosphere that doesn’t get stale.

Nothing to note here. I experienced no problems with my copy of the game.

The controls are pretty much what one would expect for a handheld RPG—nice and simple. Tapping the L button will even make your comrade give a reminder of what you’re supposed to be doing. The menus are easy to navigate, and they look good.

I wasn’t really offended by anything in this game. There is an evil organization that’s trying to take over the world with computer viruses. You’ll have to kill (or delete) a lot of these computer viruses, but there’s no direct violence against any living beings. One particular character seems to be obsessed with spirits. This isn’t elaborated upon much, but I don’t reckon she knows about the Holy Spirit.