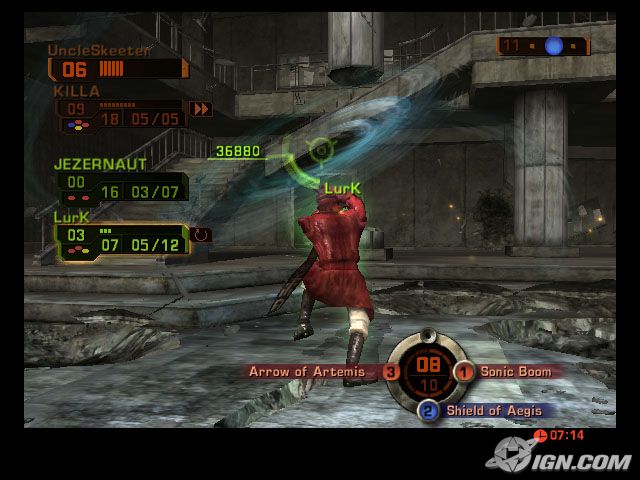 Phantom Dust is a game based upon a Japanese Anime series. Don\'t get the wrong impression though, there\'s no huge-eyed, cutesy characters. The story is based upon a post-apocalyptic setting where a \'phantom dust\' has settled over the world causing people to lose their memory if exposed for more than 15 minutes. People are forced to live in underground communities which are divided into the normal people and the members of the Vision which is a group that consists of Espers who can use their will to shape the phantom dust into different attacks.

Your enemies vary from humanoid shaped individuals to eyeball shaped robots to odd shaped robots and even huge automated machines. The skills are based upon 5 schools: Ki, Faith, Nature, Optical and Psycho and the attacks are classified as either short, medium, long, defensive or erasing skills and there is a tremendous variety in the skills. A nice touch that you get the ability to utilize a little way into the game is the ability to create and customize your own \'arsenal.\' An arsenal is a set of 30 skills that is created prior to an engagement that allows you to use the same set of skills in any battle. You purchase skills from the shop owner, Mac. You can either buy indivual skills or buy a set of \'junk\' which is a group of 5 random skills. To further the benefits of this game, you can take the battle online in a variety of online game modes and you can also trade skills with other players online. You can also play with Japanese players if you so choose. The graphics, sound and gameplay are awesome on this game and to top it all of, it\'s only $20...what are you waiting for? Go out there and get it today. Based upon the final score sheet, this is how I would rate the game:

You use your skills to destroy/kill non-humanoid robotic creatures: -3.5 There is no blood: -0 There is no gore: -0 There are a few minor swear words: -2 There are some clothing issues that accentuate the female characters: -1.5 There is no sexual discussion or interaction: -0 There is no comparisson to real life events so no authenticity issues: -0

I would say that the \'magic\' or skills used might be fairy tale or mythical in origin not anything occult though some may find it hard to distinguish. Having been involved in occult practices prior to my conversion to christianity, I see no comparisson so: -1.5

There is no prejudice between characters: -0 There is no gross humor: -0

And I would say that, while values aren\'t exactly an object for discussion, you have to deal with a friend who betrays you and instead of fighting with him, you try to convince him to rejoin the good cause so I would say it promotes good values so: -0

This game honestly has some of the best games that I have seen to date on the XBox and they really do stand out in the crowd. The skill animations are flawless as are the character models and the environments. 10 on graphics for me.

The game uses an awesome and interesting fusion of classical music (i.e Beethoven, Mozart), modern music and futuristic/techno music. The attack sounds are awesome on top of the music and I believe that you can even use custom soundrtacks so I give it a 10.

Already this game has been issued patch 1.1 which is better than we can say for Halo which is inarguably more widely played. So far I have seen no glitches/exploits/bugs that I have seen. This one gets a 5.

Finally there are the Controls:

There is a very intricate combination of skills and the like. The controls themselves are simple, the skills are set to a specific button (X,Y,A or B.) You can use the directional pad to view info on the skill (i.e. range, type, school) The control sticks allow you to move and control the camera. The most difficult part is learning the types of attacks like parabolas or arcs and how to judge distances and also when to use your defensive abilities. Other than that the controls are smooth and solid so I would say 3.5.