Thank you Sega for sending us review codes for the Bayonetta and Vanquish 10th Anniversary Bundle!

Bayonetta came to the West in 2010 and got rave reviews. I’ve owned the game on two different platforms (Wii U, Xbox 360), but this is my first time playing it. The remastered edition is Xbox One X enhanced and offers 60fps at 1440p which can be upscaled to 4K.

Visually, this third person brawler holds up pretty well though the graphics are a little bland and dated at times. The cutscenes don’t show the mouths moving half of the time, but the voice acting is solid. Bayonetta is sexy, playful, and deadly; I can see why many people would like her character. Although she’s a dark witch fighting against weird-looking celestial beings, I enjoyed playing as her; as long as she kept her clothes on that is.

Bayonetta wears a skin-tight black outfit that seems to be woven from her long hair. Her two magnificent guns are holstered at her ankles and she can wield any gold weapon dropped by the celestial minions. The enemies also drop halos which are used as currency to purchase new moves, weapons, healing items, accessories, and more. Many of the mini-bosses leave behind full or partial LP/records which can be used to unlock even more powerful weapons.

Strong Points: Likeable characters, lots of gameplay and enemy variety
Weak Points: A couple of unpleasant levels, but most of them were enjoyable; awkward camera controls
Moral Warnings: Lots of language including the f-bomb, some blaspheming; incredibly violent with lots of blood and gore; the females wear skintight clothing that disappears during some of their attacks; very little is left to the imagination for the female bodies, male frontal nudity is shown with a statue of a cherub urinating; alcohol and tobacco use shown; references to other deities

As Bayonetta searches for her lost memories and a rare gem, she’ll get attacked every step of the way.  Thankfully, she can hold her own in battle and then some!  With each successful dodge, she’ll unlock “witch time” which slows down the enemy for a short period of time.  This ability will also be required to access otherwise uncrossable obstacles be it water or metal spikes without injury.    When the full moon is in view, Bayonetta can walk up and down walls.  Some obstacles require fast speed or flight and Bayonetta can channel various animal spirits to transform into.  The black panther form is free, but the ability to change into a group of bats requires spending some halos.

Combo attacks are rewarded and encouraged in battle.  The levels are broken down into sections called verses.  The verses are usually concluded by defeating a group of enemies or a boss.  At the end of the battle, you’ll be given a trophy rating depending on how little damage and items were used.  The highest rating is pure platinum and the lowest is stone.  If you play this game in Easy or Very Easy, many of the combo attacks and blocking maneuvers are performed automatically for you.

There are many quick time events where you have to jump or evade attacks in the nick of time or die. If you time things right, you can initiate torture attacks or drawn-out climax attacks. Many of these attacks are sexual in nature. For the battle finishing attacks, Bayonetta’s outfit unweaves itself and transforms into various dragons, birds, spiders, arms, etc. The bare minimum is covered by a few remaining strands of hair. The torture attacks often employ various devices like iron maidens (spiked coffin) or stretching racks. There are some female celestial creatures that jiggle their breasts while being tortured. 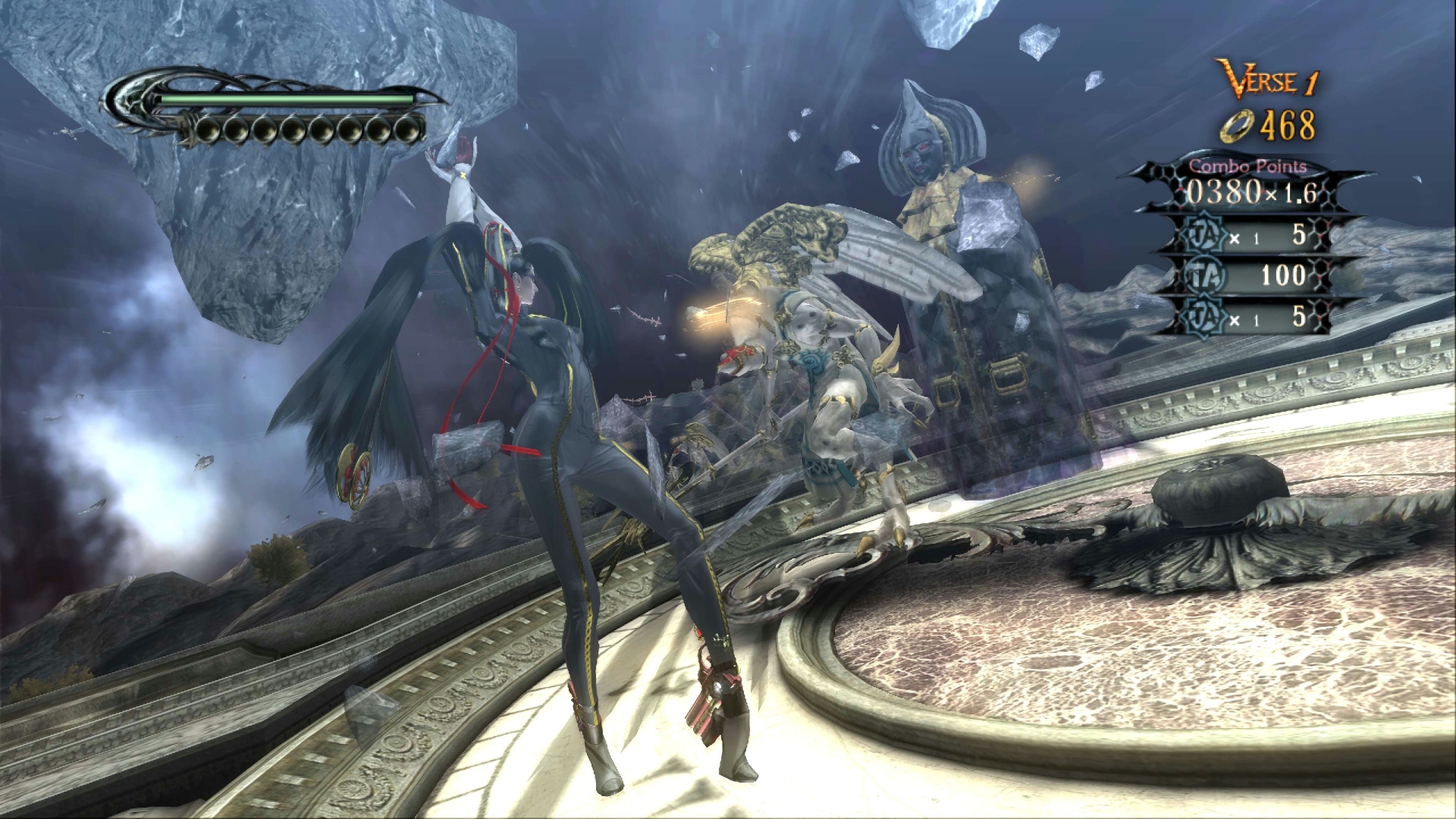 Not only are the attacks cruel, but they’re incredibly gory and you’ll often see enemies dismembered and bleeding everywhere. Fortunately, the celestial beings you’re fighting against are not very angelic or good looking to begin with. Jesus’ name is mentioned as a blaspheme, but the main deity in this game is Jubileus who resembles Shiva. There are references from many religions in this game.

The weapons shop is hidden away in a bar called “The Gates of Hell”. Like many bars, you can see people there drinking and smoking. Almost all of the characters use vulgar language with the exception of a little girl named Cereza. It’s nice to see some innocence in this game, but the rest of it is definitely not for kids.

If you don’t mind the foul language, nudity, blood and gore, Bayonetta is undeniably fun. I can see why this game has received a sequel and an anime movie adaptation. Given the content in this game, I’ll probably skip on those though.