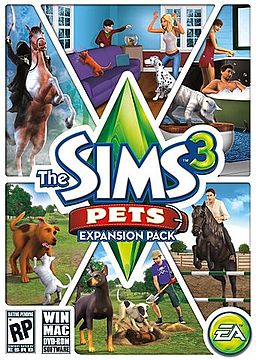 I pity the PC-less fans of The Sims series. Not only have they been subjected to some pretty half-hearted attempts at porting the series to home consoles, but they’ve also endured a myriad of problems with few decent titles on consoles. 2010’s The Sims 3 was probably the closest in terms of gameplay and attention to detail, but was marred by a host of technical issues. Loading screens and drops in frame-rate abounded, but it was hard to complain since it couldn’t be compared to anything else on consoles. Now that there’s a basis for comparison though, it’s much harder to overlook the flaws in The Sims 3: Pets.

Unlike the PC version, Pets is entirely separate from The Sims 3. None of your characters or progress carries over; you get a fresh start in a brand new town with all new residents. It irritated me that I wasn’t able to import [i]anything[/i] from a game only released a year before, but I have a hard time seeing newcomers complaining since the new town, Sugar Maple Coast, and its residents are a vast improvement over the last title’s generic setting.

As was the case in past installments, The Sims 3: Pets is a life simulator. After creating at least one adult Sim and any combination of children and animals, they’re unleashed upon the world, whether or not the world is ready for your insane, hydrophobic, inappropriate alien clown (yes, you can really make that). The little simulated people are semi-autonomous by default, so they’re able to take care of themselves for the most part, but you’re always able to override any action and “convince” (read: force) them to do something else. They can take care of their own basic needs like eating and sleeping, but you’ll normally have to command them to do anything unnecessary, like going out for a night on the town.

The world really is teeming with life in The Sims 3: Pets, and that no longer just refers to the Sims themselves. Cats and dogs populate the city just as Sims do, and even have their own abilities and traits. I was pleasantly surprised to discover that instead of a quick cash-in, the pet aspect is actually well-formed, really well-formed. 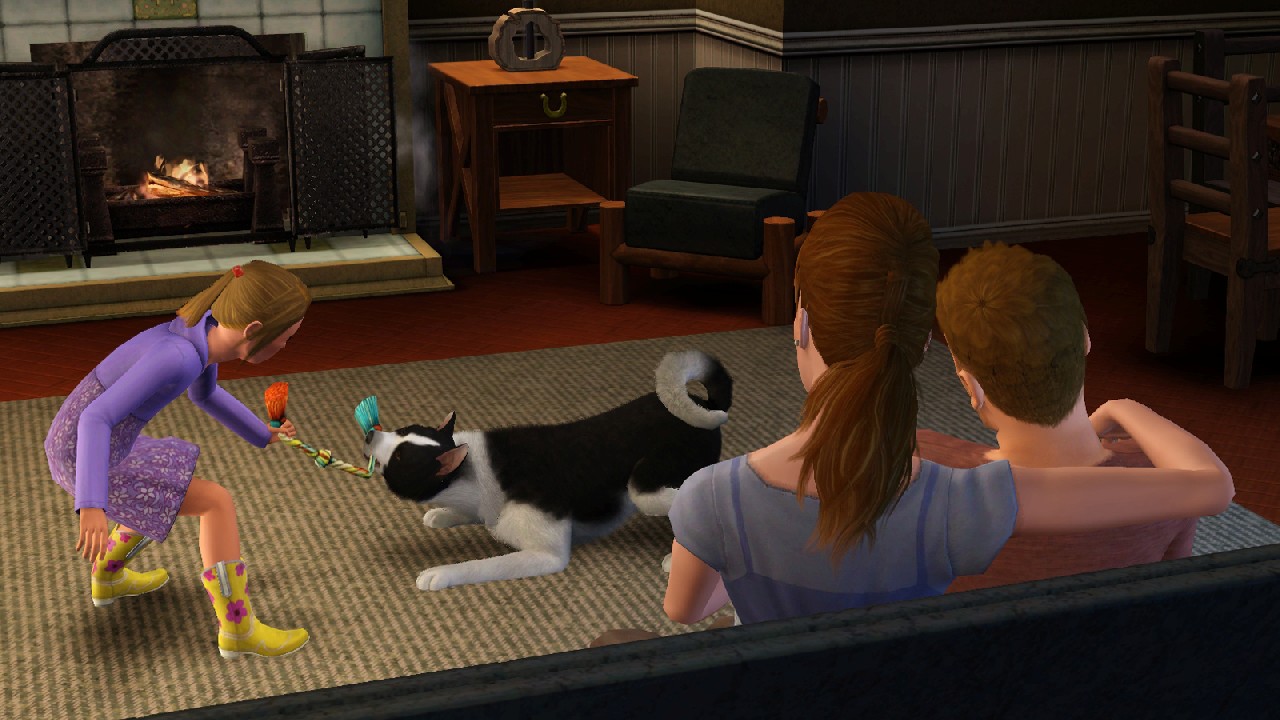 Strong Points: Still The Sims, but now with: mysteries, cats, dogs, inventing, etc…
Weak Points: Nearly all of the same problems from the first game, and more; glitchy AI
Moral Warnings: All of the issues dealt with in our own lives

While they aren’t quite as full-featured as the Sims, pets have all the qualities and abilities expected out of a life simulation. They have needs and wants, friendships and romances; they can even develop personalities depending on how they’re trained. I was even more impressed when I delved into the create-a-pet system and discovered that most popular breeds (and even a few I’d never heard of) were all represented and highly customizable. The fur’s length, color, and pattern; minute bodily details, even the collar they’ll be wearing can be customized—it’s actually kind of ridiculous.

Once I got past the great new additions though, I remembered why I originally stopped playing The Sims 3. As much fun as The Sims can be, it seems as if it just can’t be optimized for consoles. Many of the frame-rate issues were fixed, at least to some degree, but the loading screens are still just as abundant and now the game contains even more glitches. Sims would just stand around after I had told them to do something, as if they were in the middle of pondering the meaning of life and couldn’t be bothered to bathe or eat. I also encountered an interesting glitch when I discovered that all of the windows and doors to my house had been deleted…but not by me.

I suppose some of the new features help balance everything out—there’s certainly more to do, with new skills included for cats and dogs, simple fetch-quests to complete, and even a new inventing skill for Sims, but it’s just hard to say it all evens out. Even though Pets has plenty of improvements and additions, it still has the same issues that bothered me before. It looks smoother, menu navigation stutters less, and it’s a huge step above the last title in terms of content, but there’s still no reason why PC players would want to play the console version. 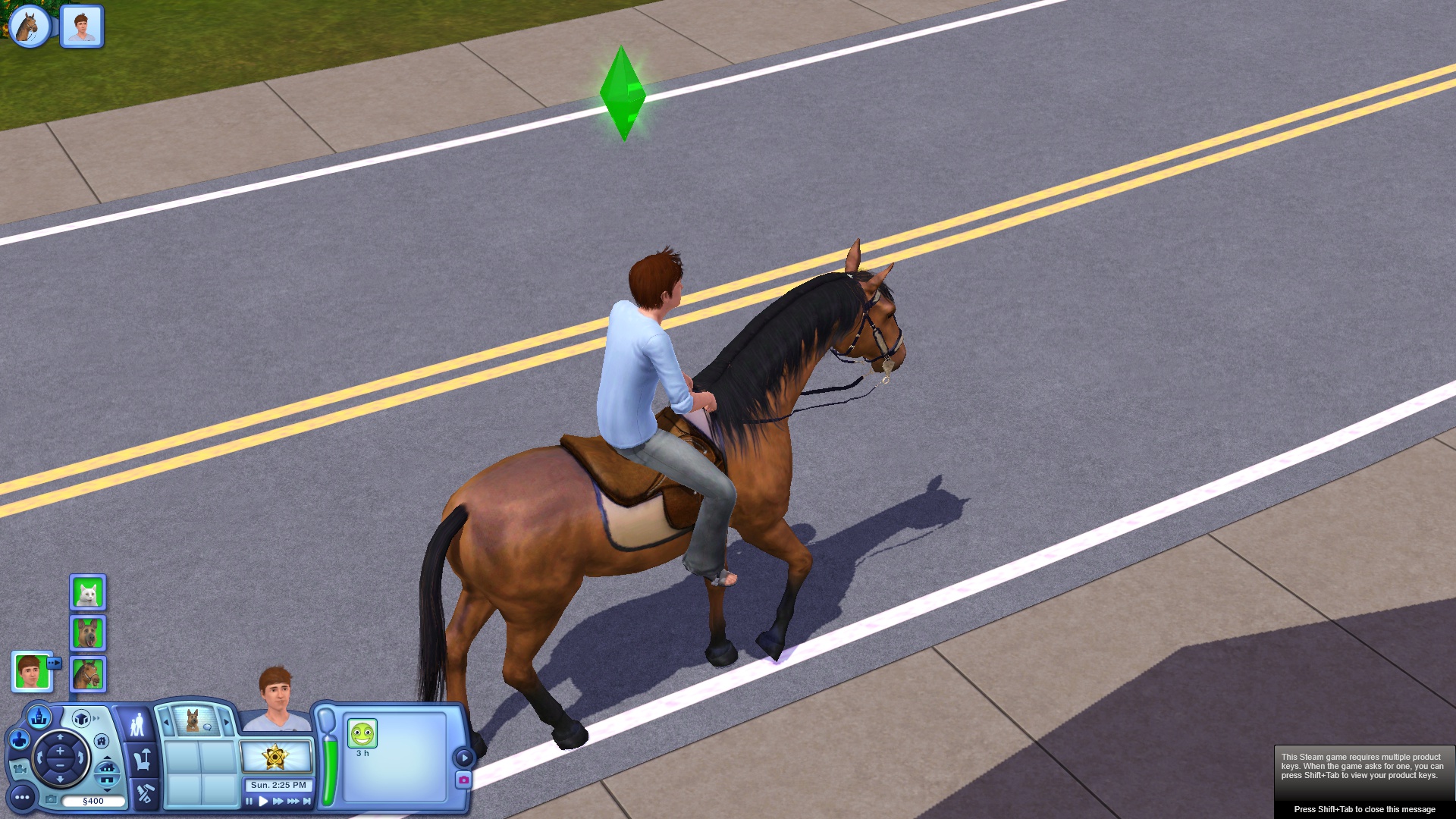 Come to think of it, I’m not sure if console owners would want to either. Even though this is a definite improvement over the original game (in most respects anyway), the fact that this was intended as a separate $50 game, now reduced to around $20, doesn’t help matters. Players of The Sims 3 will no doubt be pleased with all of the new additions, but I have a hard time trying to justify this as a buy. It has nearly everything the original has, but that’s just it: it has everything the original already had. Graphic and sound design to match the PC, workable control scheme, a small town to live out your Sim’s life—it’s nearly all the same.

Even the moral content is unchanged. Other than the usual problems with violence (cartoonish fights and traps that will kill Sims over time through starvation), revealing outfits, sexuality, and a bit of crude humor, there really isn’t much else worth noting. There’s a trait that allows your Sim to be a kleptomaniac (compulsive thief) as well as indescribably evil, but these are only choices. In fact, almost everything in The Sims is a choice, and whether or not you choose to do something morally questionable is your own decision. It’s just as easy to be a fight-picking, baby-hating jerk as it is to be a charitable, puppy-loving all-around nice guy.

Of course, it’s up to you how the game is played, and that’s actually the only reason why The Sims is worth playing. Decisions and choices play such a big part, and while that does introduce some negative possibilities, it also gives us chance to be good.

In the end, The Sims 3: Pets is…all right. It’s better than Edge of Reality’s last attempt, and the best Sims title on consoles yet, but that isn’t saying much. It’s still glitchy, still bogged down by frame-rate issues and frequent loading screens, and still vastly inferior to the PC version. If you haven’t already played The Sims before, I’d definitely recommend this for console owners. For everyone else, perhaps a rental is in order first.