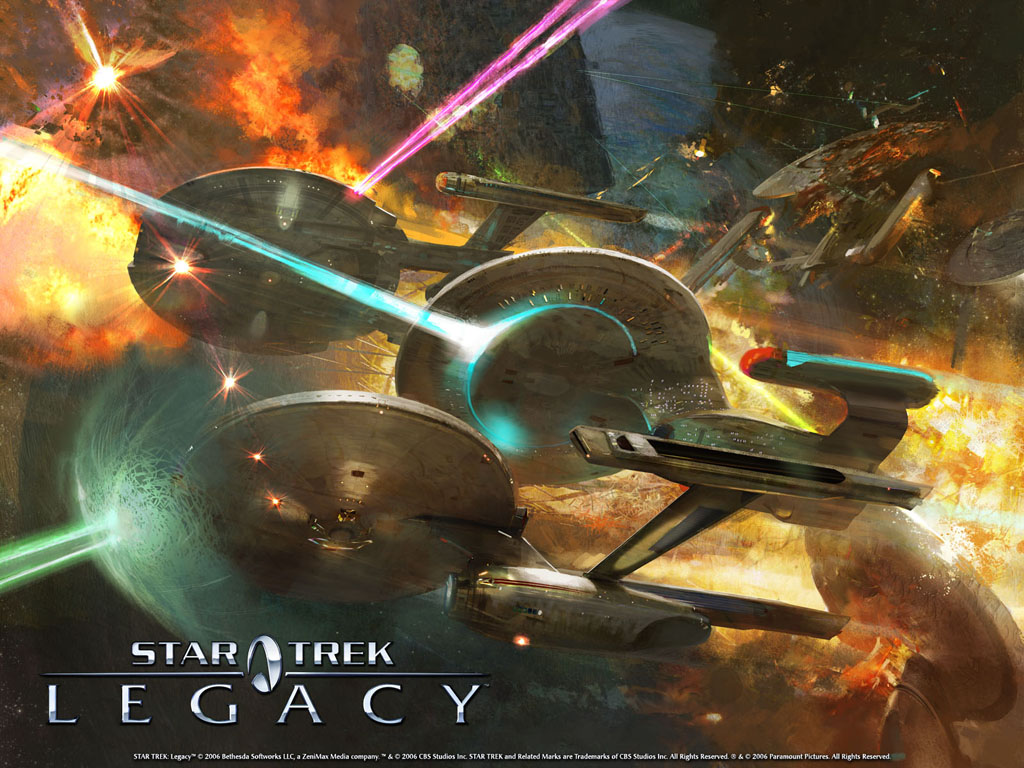 Platform: Xbox 360 Rating: E10+ for fantasy violence and mild language Star Trek Legacy is probably the best, or at least one of the best, Trek games made having to do with star ships. That’s saying a lot because over the years many have been produced but rarely have any really captured the feeling of Star Trek. This all changed with Legacy, which was made by the same people who made The Elder Scrolls IV: Oblivion, Bethesda Softworks. The captain of whichever ship you are in (just the voice), along with some cut scenes, are what tell the story of Star Trek Legacy. The story has all five captains throughout their eras chasing a mad Vulcan scientist. However, I do have a few complaints with the gameplay and multiplayer but overall it is a well made game.

In Star Trek Legacy you get to take control of a variety of ships from the Star Trek franchise. The left control stick is used to fly your ship, while the right control stick is used to move the camera. This may take some getting used to, because for me, I had some trouble remembering to move the camera with the ship. But, that was user error, not a fault in the game. I am not too sure what the game would be classified as, since it has such a unique feel to it. I believe Legacy is under the genre of strategy/adventure. I must say that the game does indeed fit the bill of an adventure game. In the single player missions, the maps can get enormous, less so in the multiplayer levels. In the multiplayer maps, if you engage your warp engines, you will be at the boarder of the map in no time at all. That is not the case with the campaign maps. Your ship may be in warp drive for a good thirty seconds before reaching the end of the map. This help gives the game a ‘Star Trek’ feeling.

Every one of the individual species’ ships feels unique to the user and each handles differently. The Federation vessels are extremely well balanced in speed, defense and firepower, while the Klingon ships have more shielding and weapon power. There is one species though that will give you that all too rare feeling of being invincible. They are the Borg. Once you take control of one of the larger Borg cubes, which can be found in multiplayer and skirmish modes, you will most likely feel unstoppable. The skirmish mode that I mentioned above is a ‘you verses the computer’ in pure battle. The only objective is to destroy the other ships, which is the part of the game that I use the most. Now for the broken parts: This game has a very steep learning curve that never really gets comfortable.

Most of the ships can be painfully hard to control, the Borg cubes in particular being the worst of the bunch, and the so called strategic elements of the game rarely come into play. To elaborate on this more, the ships don’t always fly in the direction you want them to, and once in awhile you may try to fire a phaser but instead shoot nothing at all. This does get annoying, but it is very rare. Now the strategic parts spoken of before are so simple that you don’t have to have any experience in strategy games before hand to use them well. But, as I said earlier, there is very little of this in the game, which is sad, because quite a bit more could have been put in for a star trek game. The truth is I don’t know why Legacy is said to be a strategy game, because you really don’t use any strategy in the game at all. The only thing I did that could be considered a strategic element was tell my ships to go one place to another. Sadly, this didn’t work very well. They would start going where I told them to go, but then seem to lose interest and go fight some other ship. However, the battles in Legacy make the gameplay problems excusable, because they are truly epic and insanely fun. You have a fleet of four ships, which can be Romulan, Klingon, Federation or the Borg, but you only control/fly one ship at a time, while the other three are taken over by AI, but you can switch between all four with the D pad. The levels in Legacy can vary a good deal. Sometimes you just have to kill off the other bad ships, while other times you have to protect a ship(s) and escort it to safety. Of course those are just a few of the examples, but I don’t want to go into it too much, for fear of spoiling the game.

Star Trek Legacy doesn’t have any split screen, but it does have up to four players online which means four fleets and sixteen ships on the map at once. This is one of the moments where you forget the hardness of the game, because of the amount of action on screen. I don’t play online often because I don’t have Live, so I have to do it at friend’s houses, but when I do play it is just plain fun. The worst thing about the online is that after each battle, the game sends you to the main menu screen, which can get annoying.

The graphics in Legacy are one of the biggest high lights of the game. Words don’t do them justice. Every ship in the game looks just like it does in its own series or movie(s). The detail is just mind blowing. Enterprise A looks just as it does in ‘The Undiscovered Country’ and so on and so forth. This game is fully optimized for high definition, and surprisingly the game looks nearly as good on a standard definition TV which is fairly rare for 360 games. The only fault that could me related to the graphics would be the fact that when you crash into a ship/rock, nothing happens. It does indeed make it a bit unrealistic.

OK, now I’ll move onto the objectionable content of the game and to tell the truth, there is not much to talk about. Given, there are a few uses of the word h*** and maybe, but I’m not sure about this one, one use of d***. The violence is restricted to ship to ship/turret so there is no blood or gore. Obviously there is no nudity because of the total lack of seeing humans through the whole game. I found it to be a very clean game with the exception of what was stated above.

If you could not tell from the review, I’m a Trek fan. So I truly liked Legacy even for just being given the opportunity to fly about every ship in Star Trek. To non Trekkies, the extremely steep learning curve and the overall hardness of Legacy may turn you off but the epic battles that Legacy offers make it worth the time to check out.