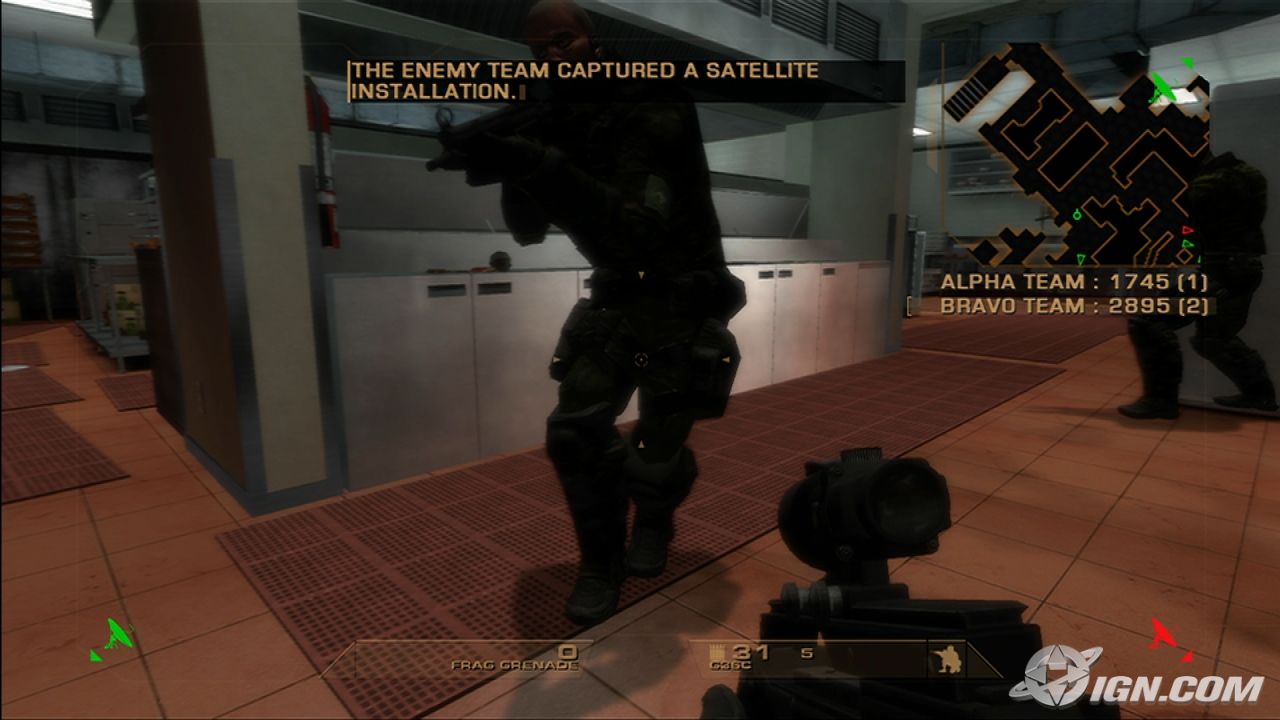 Rainbow Six Vegas is the latest release in the Rainbow Six first person shooter series that gamers everywhere have come to know and love. The original made a huge splash in the industry with it's unique blend of strategy and intense bursts of action. The first full-fledged sequel was Rogue Spear, which upped the graphics and tweaked the gameplay slightly to make the formula work even better. After a couple expansion packs, Rainbow Six 3 stepped up to the plate. Developed by Ubisoft Montreal, Rainbow Six 3 ditched the Rogue Spear engine, and utilized a much more powerful one: The "Unreal" engine. This game was an instant hit, and one of the better games released on the Xbox. Unfortunately, it was followed by two duds: Rainbow Six Lockdown, and Rainbow Six: Critical Hour (which can only be described as an embarrassment). But with the next-generation now upon us, Rainbow Six was back in the extremely capable hands of Ubisoft Montreal, and they brought us what is arguably the best game in the series. Ubisoft Montreal packed every square inch of Rainbow Six Vegas full of exciting and explosive content. Gone are the days of 10-20 minute long strategic planning sessions as consistently intense action has taken it's place. Gone are the muddy and bland textures and in are the bright and expansive sights of Vegas. Gone is the lack of storyline and in is...Well, at least an attempt at a plot. Which is smartly told in-game, and not broken up through cut scenes. I won't go into much detail, but it's safe to say that the plot includes political turmoil, twists, and, of course, terrorism (although how they snuck thousands of terrorists with unlimited ammunition into Las Vegas was oddly left out). Needless to say, it's your typical Tom Clancy storyline, but, unless I'm mistaken, people don't buy Tom Clancy games to become emotionally engaged in the story, so I won't waste any more time on it.

The game starts off in Mexico and throws you right into the action. Your squad isn't with you, so it gives you the perfect chance to try out all the new features of the game. The best being the cover system. This is by far the simplest and most intuitive cover system I've ever seen in a video game. The controls are simple: Walk up to a wall, hold the left trigger and voila, the camera pans out to a third person view and you are protected from those pesky bullets. This cover system allows for intense close quarter firefights, and also gives you some time to think about your next move. This is the most strategic aspect of the game as many times you are forced to control your squadmates from cover. You can give the basic "move" command with one button, and the specific command shifts according to the placement ( i.e. "move to cover" when your reticule is placed by a wall). Aside from this you can give your squadmates breaching commands that work much like Rainbow Six 3 which, needless to say, adds an incredible layer of depth when approaching rooms with more than one door. Aside from the occasional area where smart tactics are needed, the game is all action. And in that respect, it delivers.

The A.I. is smart, the bullets hit hard and the incredible graphics pull you right in. Utilizing the Unreal 3 Engine this is a great looking game. The game runs at a steady 30 frames per second and rarely stutters. Which is surprising, because although the early Mexico levels are quite bland, Las Vegas is a stark contrast with bright colors and incredible detail. Slot machines spew coins when shot, wine glasses shatter and sparks fly. The level of detail on your squadmates (and your enemies for the most part), is almost freakishly realistic. When enemies are killed they slide, crumple, or fly, depending on how and where they were shot. The graphics are rounded out with some great weapon models and particle effects. The only downsides would be some muddy city textures (especially when seen from a helicopter), and slightly washed out multiplayer graphics. Overall though, this game looks fantastic.

Along with the fantastic graphics comes incredible sound. These guns don't pop. They bang. Loudly. Taking cover behind a bar, only to hear the bottles smashing and wood splintering as bullets pound into the side is highly satisfying. Also, although the language is quite terrible (more on that later), the voice acting is well done. The Mexican terrorists sound Mexican, and the ones in Vegas sound...Well, Russian, but it hardly sounds forced. Also since the story is delivered in-game, the briefings are all spoken, and it works well this way. It helps to (loosely) connect the levels without having random missions. All that being said, this game just begs for surround sound, as the sounds are all impressively separated. Hearing footsteps coming from behind you, or gunshots in a certain area of a map really gives you an advantage in multiplayer.

Speaking of multiplayer, this is the area where Vegas truly shines. The amount of options available make it one of the more robust multiplayer experiences on Xbox Live. There are the regular deathmatch modes, capture the flag, survival, attack and defend and a few others. I usually stick to survival, but the rest are all well-balanced and equally fun. The amount of customization for each mode is astounding and, like Ghost Recon, there are almost unlimited multiplayer options. The maps are all also fairly well-balanced, but as usual, there are the few typical spots where most of the action takes place and the rest of the map is virtually traffic free. Also, a recently added update (available for download via the Xbox Live Marketplace) added a few new maps and a couple game modes (for 800 points or roughly $10).

Although the multiplayer is one of the best the Xbox 360 has to offer, it still has some minor flaws. First of all, as I mentioned earlier, the graphics have a slightly "washed out" look about them, meaning the colors aren't as crisp, and everything looks ever-so-slightly faded. Also, this is a problem with most games since Halo 2, but there is no sign of a decent matchmaking system. Also, custom matches are a little confusing, as you might join a survival game mid-match, and be kicked out after it finishes. I'm not sure why they include those in the search, but I'm sure a quick update could easily fix that. Now after griping for a bit I thought I would finish the multiplayer section off with the best part: up to 4-player co-op through the entire campaign. This is by far the smoothest and most enjoyable co-op I've played on Xbox Live. Also with the ability to map your own face on your character (via the XBL Vision Camera), prepare to see some hideous terrorists out there (trust me, the faces usually don't turn out so well). There is split-screen co-op but there are no adversarial modes. Split-screen is only available for 2 players, so it's a bit of a letdown. Now I'll take a break from glorifying this game because we're headed to...

Well, there are quite a few issues to tackle here, but I'll start off with the violence. The violence in this game is frequent and intense. The firefights range from long range pot-shots, to close quarter bursts. The amazing physics allow for some interestingly realistic death animations, which definitely pulls you into the action (for good or bad). The blood is also some of the most movie like I've seen (for the most part), but that also means it splatters, smears and pools. Also some rooms, where previous shootouts have taken place, have blood pooled and smeared all over the floor, walls, and covering dead bodies. Needless to say, this is a violent and bloody game, where you are constantly killing the enemy. Which, at least in this case, is terrorists. Next on the list is strong language. They pull no punches when it comes to cursing as every word in the book is used. Several times. The "F" word is probably the most frequent, and pops up several times in each level, mainly yelled out by terrorists under fire. It's also combined with "mother" quite often. I know the every other word shows up too, but due to the intensity of the action, I didn't pay attention to the frequency of the others. I'm also quite sure Jesus' name is used as well. The one positive thing about this is that voices can be turned off. This works well for the missions (especially in co-op), but it also mutes the voices for the briefings and in-game cut scenes, which you need to hear just to understand what is going on.

Now the ESRB has also felt the need to tack on "suggestive themes" to the M rating. I'm not sure exactly what they based this off of, because the only thing I noticed were some mildly suggestive posters. Mainly for "Axe," but even then, they were nothing like the Axe commercials (or even the online banners and pop-ups for that matter). Of course it's well known that Las Vegas is known as "Sin City," but there's really no sign of that in this game. So that being said, suggestive themes are mild, and shouldn't be a problem for anyone. Even without the blood and cursing, I'm not so sure Vegas would escape an M rating. The death animations are so realistic and the violence is so intense, it's really hard to imagine this as a T rated game. But for mature gamers, Rainbow Six Vegas is a real treat. The single player is expansive and the multiplayer is undeniably addictive. As a plus, the xbox live community is decidedly more mature than, say, Gears of War, which is full of quite possibly the most childish gamers out there. The bullets hit hard, the action moves fast, and the blood flies, but for mature gamers, this is one of the best first person shooters available on the Xbox 360.

Game Play: 19/20 - Near perfection. The faster pace mixed with the new context-sensitive actions make anti-terrorism an enjoyable and engaging experience.

Graphics: 9/10 - Again, near perfection. Amazing physics, particles, textures, and blood. 1 point taken off for slight downgrade in the multiplayer modes.

Sound: 10/10 - Perfection. Powerful, and well separated. Your neighbors will duck for cover with surround sound.

Stability: 5/5 - I have yet to experience any stability issues.

Controls/Interface: 5/5 - The most clever use of cover in any shooter so far (yes, much better than Gears of War). The rest of the controls work quite well. Controlling your squad is simple and intuitive.

Violence: 3/10 - This is one violent game. The excellent graphics certainly ramp up the intensity and the impact of the violence. Blood is commonplace and quite realistic. It IS anti-terrorism though, hence the 3 points.

Language: 1/10 - The F word is frequent and used in all variations. Due to the intensity, it's hard to tell exactly what else is included, but be sure everything is. Jesus' name is used.

Cultural/Moral/Ethical: 10/10 - You are killing people who intend to do major damage to cities. You also rescue hostages and escort them to safety. No good guy/bad guy lines are blurred.