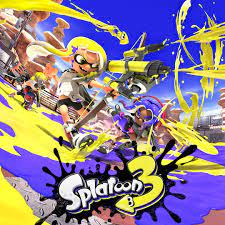 Splatoon came out in 2015 and quickly became one of the Wii U’s best selling games, even if this isn’t much of an accomplishment. Naturally such a large success would warrant a sequel, right? Well, it did, and Splatoon 2 sold even more than the first. With yet another success under their belt, Nintendo decided to make a third entry and that led us to Splatoon 3. I’ve been a fan of Splatoon since the beginning so I was excited to see that they were making a third game with a bunch of changes to the gameplay.

You play as an Inkling or an Octoling, a squid or octopus who can transform into a humanoid form at will. The game takes place in Splatsville, a city rooted in tradition where chaos reigns supreme. This city’s become one of the hottest places for Inklings looking for something to do, so naturally you and your Smallfry, a small fish creature, decide to go there. However, near this city lies an ancient secret.

Near Splatsville lies The Crater, a massive hole where Craig Cuttlefish is waiting to recruit the player into the New Squidbeak Splatoon to learn more about a mysterious fuzzy ooze that’s capable of covering any being that touches it with hair. Beneath The Crater lies the islands of Alterna, an ancient human civilization that served as a last resort. Across these six islands you encounter the game’s various levels, which you need to clear in order to collect power eggs, needed to clear the fuzzy ooze.

The stages in Story Mode all require you to use a different weapon for a different task. In one stage, you could be making your way to the goal while fighting various Octarians, a race of octopi who cannot change into a humanoid form, while on the next you could be breaking boxes to match a shape. Most of these stages are quite fun, but some of them are more tedious than anything. Most of these tedious stages involve breaking a certain number of targets while under a time limit or while riding on a grind rail. When not completing stages, you have multiple hubs to explore. Across these hubs you can find various collectibles that are used in Splatsville, give you some extra lore, or enhance the hubs. There are various blobs of fuzzy ooze that you need your Smallfry to clear when powered up by the power eggs that you’ve been collecting. 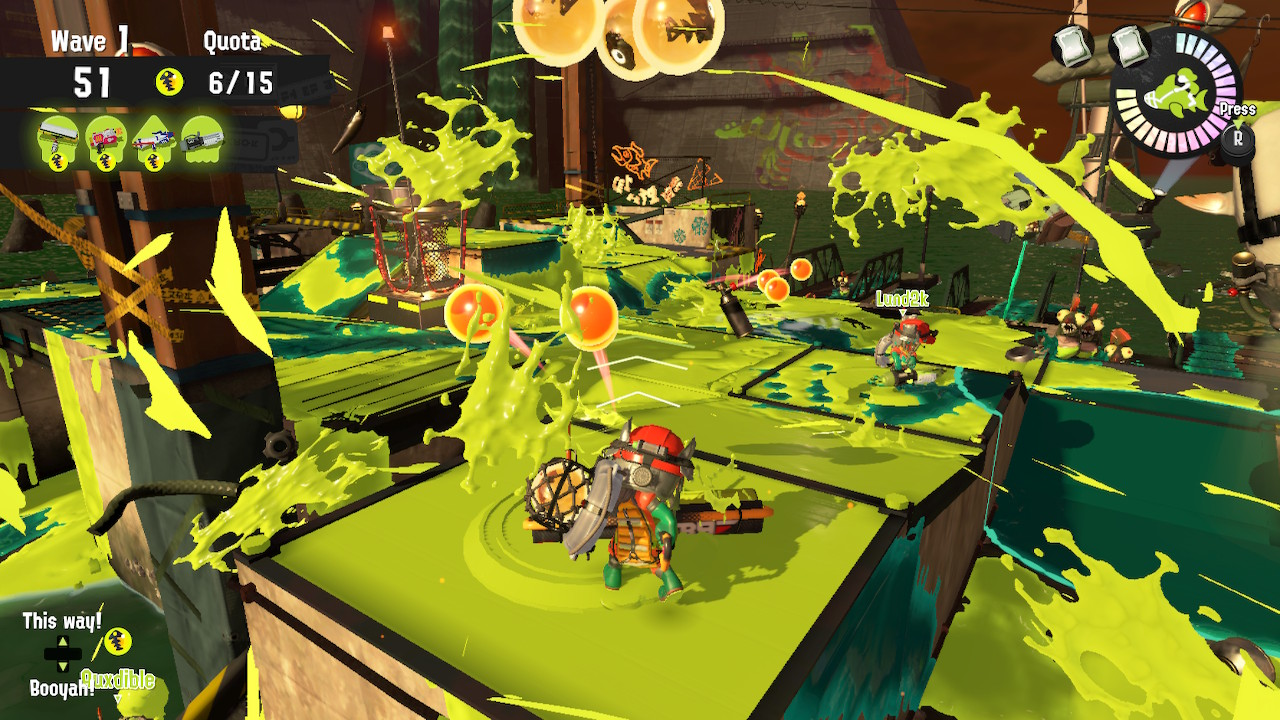 Strong Points: A perfect conclusion to the Splatoon’s overarching story; various quality of life improvements that make the experience better; excellent gameplay that rewards practice; various other modes for when the main gameplay gets boring; a large variety of weapon types for every playstyle.
Weak Points: Some single-player stages are more frustrating than fun; some occasional connection issues.
Moral Warnings: Cartoon violence; slightly revealing character designs; lack of use of male and female pronouns when referring to the player; a few uses of “sucks”; reference to an incantation.

There are a few boss battles across the story, and these are honestly all amazing. Only one of them is a repeat from previous games, while the others are all unique ideas that show off some of the game’s new mechanics or serve as references to previous entries and even previous Nintendo games.
The actual story is perhaps one of the best in the series and made me appreciate some of the new characters a lot more. The story perfectly wraps up the mysteries of the previous games while still leaving new mysteries for future entries.

When you’re not saving the world in Alterna, you can partake in 4-on-4 multiplayer Turf Wars or ranked modes. In Turf War, you paint the stage to try and have more of the map painted than the other team. In the ranked Anarchy Battles, you have four modes where the goal is different. You have Rainmaker, Splat Zones, Clam Blitz, and Tower Control. Almost all of these modes boil down to guarding a thing so it can reach a location or get you enough points. These modes are all on rotation with two available at once through Open and Series. In Open, you can take on ranked matches one at a time with friends or by yourself and in Series you have to play through five matches in a row in order to gain more points. You currently can’t do series battles with friends which is slightly annoying. Occasionally, you do get dropped out from a game due to poor connection and if this happens enough, you get locked out of online play for a few minutes.

You always have one main weapon, a sub weapon (usually some type of bomb,) and a chargeable special. There are multiple weapon classes that all cater to different playstyles. These classes include the standard Shooters, the slow but powerful Rollers, and the long-range Chargers. Alongside the returning classes, there are two new ones, the close-ranged Splatanas and the bow-like Stringers.

If you ever get tired of Turf Wars or Ranked matches, you can go work for Mr. Grizz in Salmon Run. Here you must work together with teammates to fight off three waves of Salmonids in order to harvest Boss Salmonids’ golden eggs, which you can now throw towards the goal or another player. Almost all of these bosses use some form of special weapon, and some of their gimmicks last after they’ve been defeated. You have a quota of golden eggs you need to meet per round as well as various modifiers that can be anything from fog to obscure your vision or a giant tornado that throws enemies around the map. In this mode, you’re restricted to one of four randomized weapons and one randomized special. Occasionally, after completing all three waves, there’s a bonus extra wave where you must fight off a King Salmonid using golden eggs. This wave is challenging, but if you fail it won’t hurt your overall score. 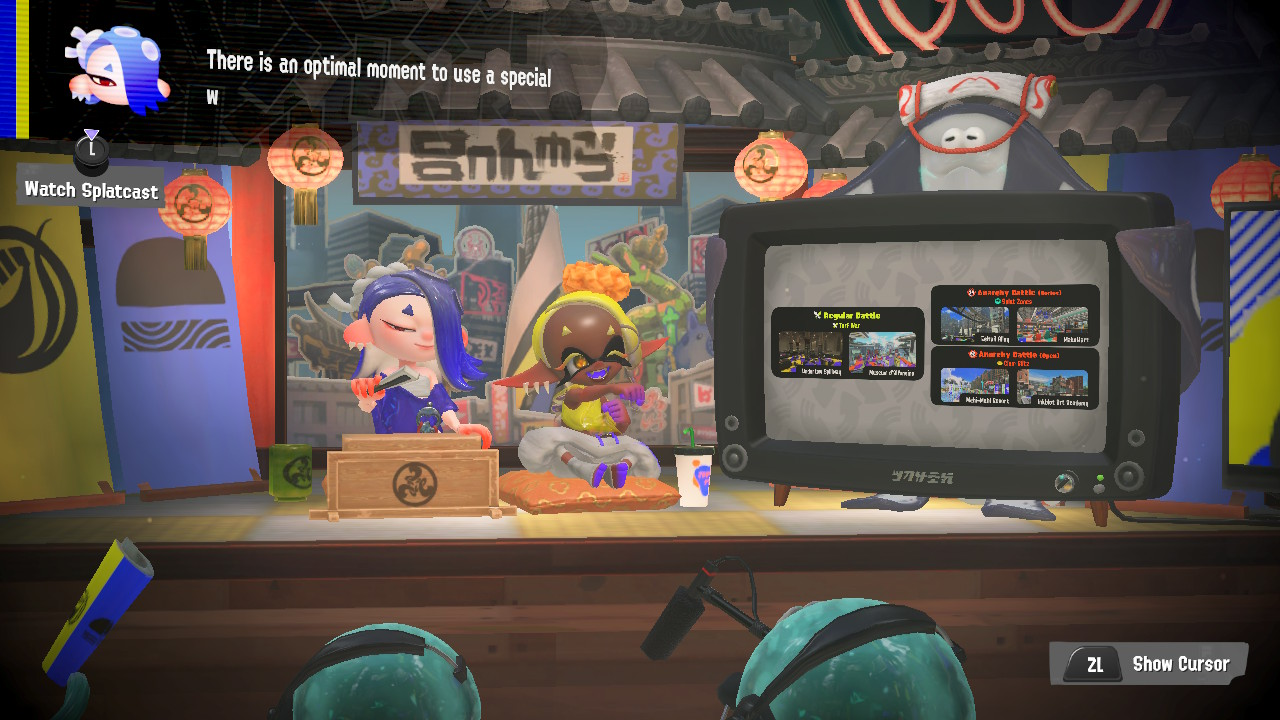 One of the largest changes to the game is present in both Salmon Run and Turf War, the lobby. Instead of the previous games’ loading screens you now have a small training area where you can mess around with your weapon, new movement techniques such as the squid roll or squid surge, and if you’re playing with friends you can see them in the form of slightly transparent holograms.

As always the visuals of the game are quite impressive, even on handheld mode. The resolution and framerate have rarely dropped in the 40 hours I’ve spent with the game.

Music has always been one of Splatoon’s strong suits. The soundtrack is one of the sections that the game designers put the most effort to and it shows. Some of the new songs, such as Clickbait, went through multiple changes up until the game’s release. The soundtrack of the game always has lyrics that are meant to sound similar to many modern languages while still being gibberish.

Overall, the game’s content is quite tame. The violence is all cartoony and most characters respawn within a few seconds. The worst language that’s present are a few uses of sucks in the story. One of the game’s songs contains Inkantation, a reference to an incantation. A few characters have some mild midriff, but the most concerning part is in the game’s referral to the player character. Much like other recent Nintendo games, there’s a lack of gendered language when referring to the player as well as Captain 3, the player character from the first game. This is an especially strange change considering that gendered language was present 2.

Overall, I enjoyed Splatoon 3, and it’s probably my favorite game in the franchise. The game does enough to set it apart from 2 and improve the game quite a lot. There are a few moral warnings with the violence and mild sexual content but in the end, the game’s fun for all ages. I recommend Splatoon 3 to anyone who likes Splatoon, shooters, or online games.