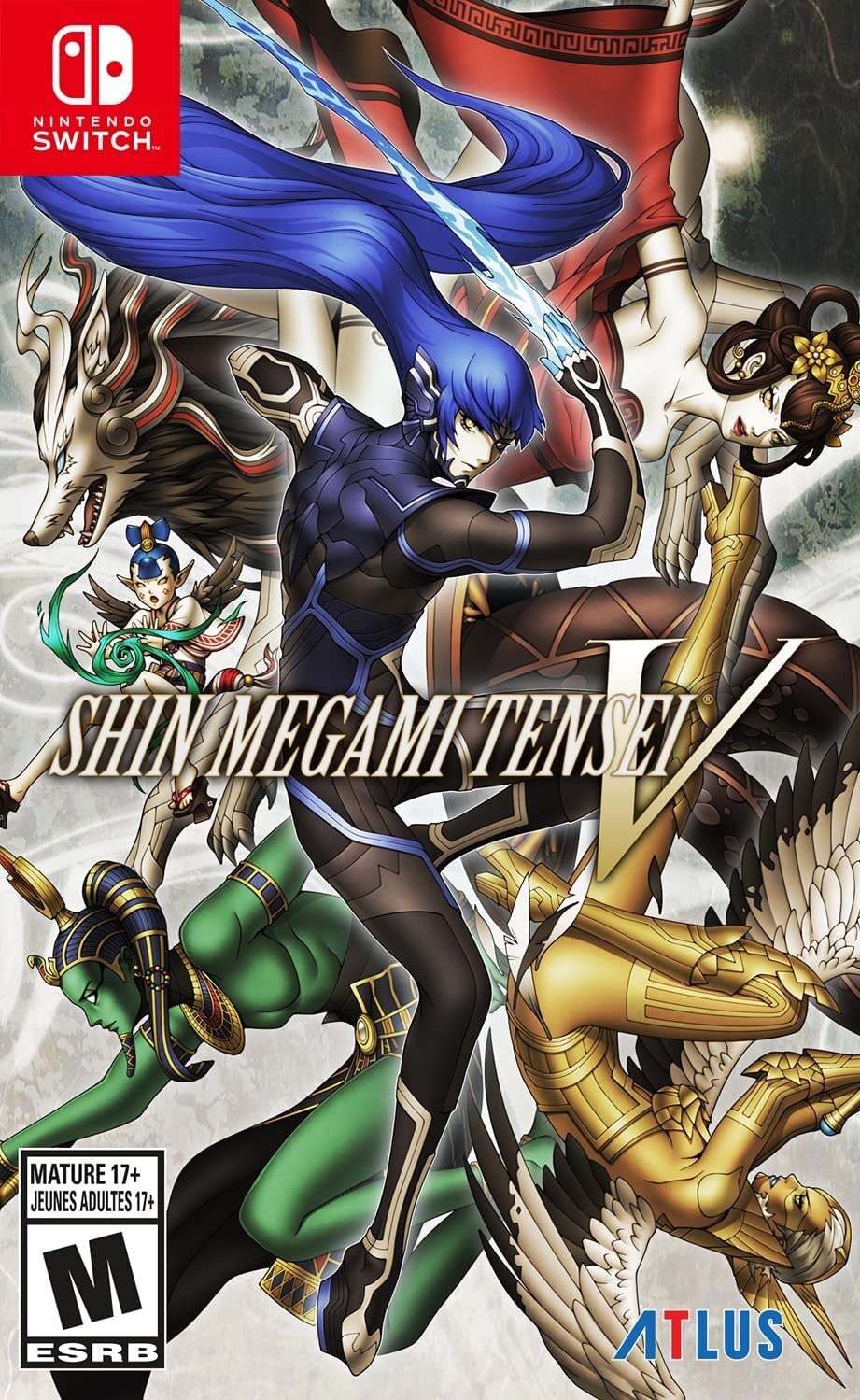 The story behind Shin Megami Tensei V (SMT V) takes inspiration from various world religions, mixes them up in a blender and dishes it out as follows: A God of law seated himself at the throne of creation and seized knowledge from all of the other gods so they could never approach the throne. Instead of gods, they’re considered demons now. Meanwhile, humans gained some of this knowledge in the Garden of Eden after being tricked into eating forbidden fruit by an evil serpent. Because of their actions, God banished humans from paradise, but they still kept this knowledge that makes all of the demons envious of them.

Like many anime and video games, SMT V takes place in high school. You get to name the androgynous protagonist. Although he’s a guy, he rocks some serious eyelashes and girly hairstyles. Especially in the underworld with his long flowing blue hair. How he arrived in the underworld is uncertain; he just woke up in a barren world on his way home from school one day. He quickly discovers that some of his classmates are in this underworld too. One of them gets swept away by an angel before the protagonist’s eyes. This rescued classmate is lucky, as others are bound to get found by hostile demons first. You must save them and figure out what’s going on!

Shortly after watching your classmate get taken to a sanctuary by an angel, the main character gets surrounded by demons. He’s rescued in the nick of time by a cyborg-like man. By forging an alliance with him, you become a transcended being known as a Nahobino. These demon-human hybrids are forbidden by the ruling god. Why is this now tolerated, and why are demons overrunning Tokyo? It all becomes clear later on in the game. How to resolve this dilemma is up to you as this game provides numerous ending routes. You can ascend to godhood, destroy the throne and let humans rule, or make it a free-for-all for gods and demons alike.

Your first order of business is to save your fellow classmates, but you can’t do it alone. In order to stand a chance against the hordes of demons roaming the world, you’ll have to forge alliances with them to get them to fight alongside of you. As you roam around, time will progress and the moon will change phases. Depending on the phase of the moon some demons will be more willing to negotiate with you than others. In order to join your team they want macca (money), an item from your inventory, or some of your health or mana. As a general rule of thumb if they ask for macca twice, you can tell them that they’ve had enough and they will concede. Your character can only recruit demons that are equal or lower leveled. Through some main or side quests you may get higher-leveled demons in your party, which is a huge bonus in battle.

Strong Points: One of the best looking games I’ve seen on the Switch to date; great voice acting; good story with multiple endings available; New game+ available after beating the game
Weak Points: Some graphical shortcuts had to be made to run well on the Switch; loading screens
Moral Warnings: Androgynous lead character; language (*ss, d*mn, sh*t, f*ck); you have to forge alliances with demons in order to succeed; many deities and demons from various religions are represented here; some of the female demons have an aversion to clothes; some demons like Mara are clearly designed after male the reproductive organ; combat violence and bloodshed

The main character and demons all have different skills, attacks, affinities and attributes. As you level up many points are automatically assigned to various attributes like strength, magic, vitality, agility, and luck. You can manually assign one point per level. I focused the most on strength, magic, and vitality.

Like the demons, you can use various physical and elemental attacks. Most demons have elemental affinities that cause them to absorb, block, or succumb to various attacks. At each save point, you can enter a shop to buy or sell items as well as enter the World of Shadows to modify demons and claim their abilities. You can fuse together demons to make stronger ones, and you can acquire their affinities or skills if you have their essences in your inventory. Being able to change up your attack skills and elemental affinities is crucial for boss battles. If you know a boss uses a certain elemental attack, you can make your character resist, reflect, or absorb those attacks back into health points.

As you wander around the underworld, you’re bound to find mischievous red demons call Miman. If you bring them back to the storeowner, he’ll give you rewards for every five you bring back. You’ll also earn some glory points which can be used for redeeming valuable abilities like unlocking more skill slots for your character and party members. Glory points can also be used for unlocking the ability to carry more demons in your inventory.

If you ever see a white mist stream up to the sky, that’s a glory fountain and if you gather it, you’ll get 100 glory points. It should come as no surprise that these fountains are often off of the beaten path and are not easy to get to. There are also quite a few stone demon statues that you can interact with to instantly level up most if not all of your demon party members.

Battles in this game are turn-based and who starts the fights is often the one who gets to attack first. If you can sneak up on your opponent you’ll have an advantage. During your turn you can attack, talk, use an item, pass, replace a party member, or attempt to flee the battle. You have a limited number of actions during your turn, but as a general rule you get one action per party member. If your attack hits an elemental weakness or does critical damage, you’ll gain an extra action. On the flip side, if your attack misses or is blocked, you’ll lose actions.

The three gauges you have to pay attention to in battle are your health (green), mana (yellow), and Magatsuhi (red). When the Magatsuhi meter is full you can activate more powerful magic attacks and physical attacks that are guaranteed critical. Alternatively, if you do not activate it, your party will regenerate health and mana during each turn. It’s a good idea to begin each boss battle with a charged up Magatsuhi meter.

As you wander around you’ll sometimes come across green, red, and yellow orbs that will replenish your gauges. You can heal at save points, but it will cost you some macca. If possible, you’ll want to heal and revive party members using skills to save you money in the long run. Visually, SMT V is quite impressive on the Switch. This has got to be one of the prettiest games I’ve played on the system so far. Granted, many of the demons and the bosses look pretty putrid, but they sure have a lot of detail. Some corners had to be cut to get this game to run well and maybe that’s why the NPCs are missing their eyes. All of the main characters have them so if a character is important they can see.

The voice acting is great, and there’s a good variety of background music, especially during the boss battles. Many of the sound effects from the previous games are carried over so the battles should sound familiar to veterans of the series.

Now let’s address the elephant in the room. Should Christians play this game? I won’t make the decision for you but I will say that this title has many moral issues that should be considered before buying or playing this game.

The design of the main character is unique, he’s effeminate and I honestly thought he was a girl at first. It’s not too hard to mistake him for one in the netherworld with his long flowing blue hair. I don’t know or care about his sexual orientation, but you can choose to play along with or reject being hit on by female demons during the negotiation process.

Many of the female demons are sparingly dressed and show off their curves. The demon Mara is clearly designed to look like male genitalia. You’ll come across many loading screens and they show the back stories and some of them are rather strange. One of the demons is described as castrating himself. Along with descriptive text, you’ll come across visually disturbing scenes of angels and demons being ripped apart and impaled. Blood is shown in a bright pinkish red, digitized format which makes it slightly less gruesome I guess.

Language is all over the place and you’ll find minor and strong curse words including the F-bomb. Pretty much all of the religions are represented here and you can have demons of the Old Testament fighting alongside Hindu gods and archangels.

There are multiple endings, and like previous entries in the series, you can actively reject God’s will/order. You can reshape the world to have humanity rule it or have gods continue to fight for the privilege. Depending on your path, you’ll have different bosses to fight in the final area.

If you’re returning to the Shin Megami Tensei series, there’s a lot to like in this entry. I’m not surprised that it’s the best-selling installment to date. Like its predecessors, there are many moral issues to take note of. If you’re not comfortable making contracts with demons, you’ll want to pass on this franchise.