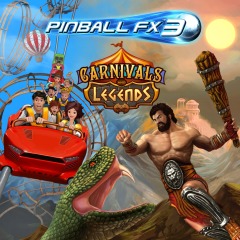 Thank you Zen Studios for sending us review codes for the Switch version of the game and the recently released Carnivals and Legends tables!

We recently reviewed Pinball FX3 on PC when it came out in the fall. Despite a minor setback in the Switch version’s release, it was certainly worth the wait for the portable pinball experience. During the Switch version’s December launch week, everyone who owned the free Pinball FX3 base game could grab the Carnivals and Legends DLC tables for free. Now that the deal is expired it’s now available for $6.99. I’m happy to own these tables on Switch, but I wish I knew about this earlier so I could have grabbed it for PC as well.

Pinball FX3 is the successor to the previously free and popular FX2. Though FX2 was never available for the Switch, FX3 has some nifty Switch exclusive features including rumble and vertical screen mode. Hot seat mode is still available which allows up to four players to take turns after each ball is lost. Every table now has challenge modes added to them which spruces up single player gameplay quite a bit. Tournaments and matchmaking are easier to set up and there’s a helpful female guide to teach you the basics on how to use Pinball FX3. Learning how to trap and pass the ball between flippers is a handy skill to learn so pay attention to the guide!

The three challenge modes are 1 ball, 5 minutes, and survival mode. The goal in the one ball challenge is to get the highest score possible with only one ball. If you lose the ball while the ball save light is illuminated, that still counts. After the ball is lost for good, your score is added to the global leaderboards and stars are earned depending on how good of a score you received. The 5 minute challenge give you an unlimited number of balls so you have plenty of opportunities to get a high score within the time limit. The survival mode gives you unlimited balls as well; however, if you don’t meet the score requirement in the time limit, your game will end. 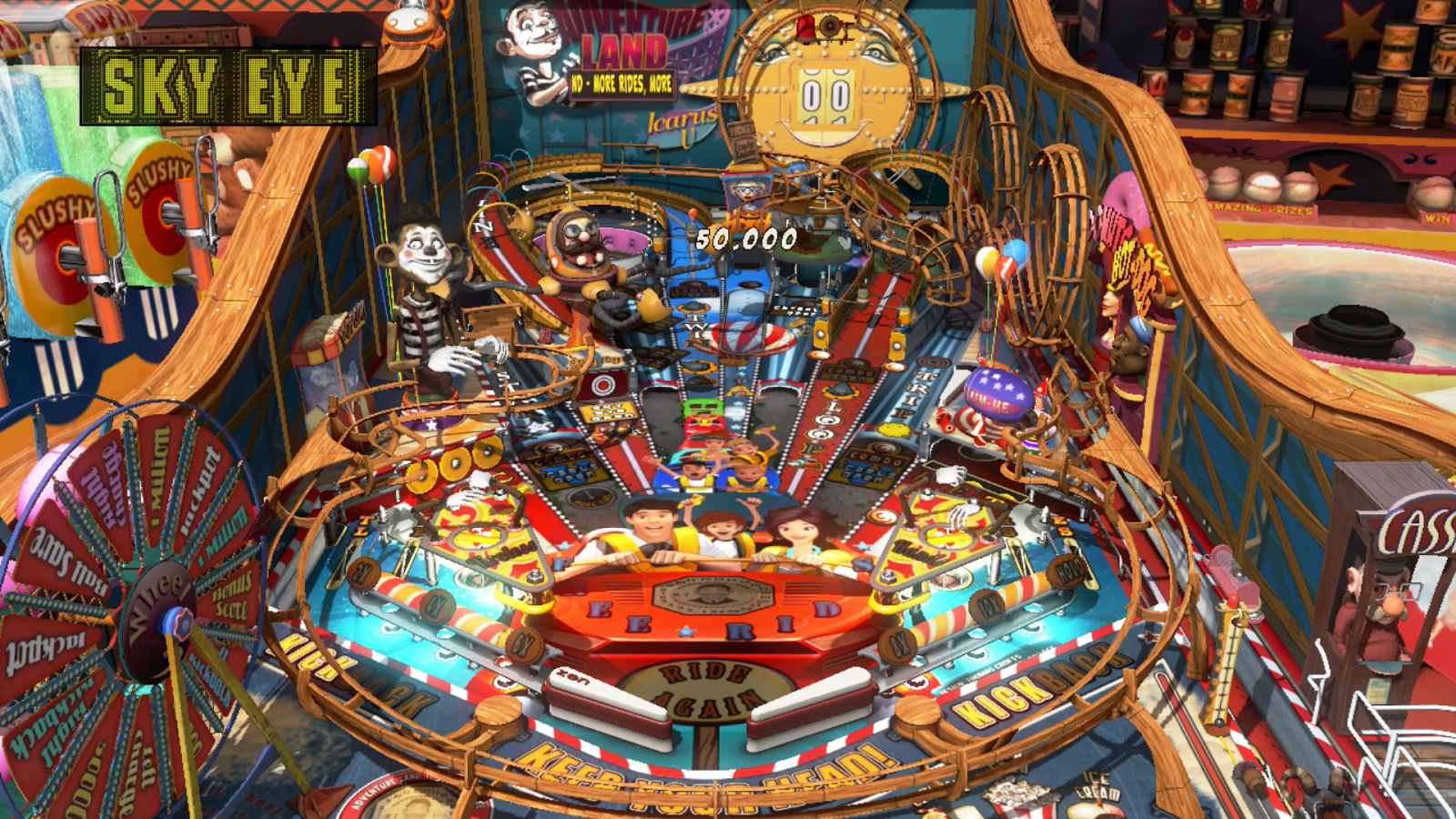 Strong Points: Pinball on the go; vertical mode; rumble support
Weak Points: Although I witnessed some stuttering this game ran well for the most part; the vertical mode is neat but uncomfortable and harder to navigate
Moral Warnings: Fantasy violence as Hercules must defeat several mythical foes; Hercules is called a b*stard by Hera; besides Greek gods, there are references to ghosts and magic use

Pinball FX3 does come with one free table, Sorcerer’s Lair. This highly detailed table has four flippers to control and several mini-game areas to explore. You may be tasked with solving a gear puzzle or hitting spiders with your ball. Throughout the table, you may come across gates to the void that need to be closed or ghosts that need to be vanquished. As the title suggests there is some magic used in this table.

I like how every table in FX3 has a built in guide that explains how to access and clear the various mini-games. They also explain how to access the coveted multi-ball modes that rack up serious points for shooting your name higher and higher up the global leaderboards. You can also see where you rank among your friends and it’s quite humbling to find out that I won’t be threatening their rankings anytime soon.

While the Son of Zeus table doesn’t have as much flair as Adventure Land, it certainly does have a good amount of mini-games to tackle with all of the challenges Hera throws at Hercules. To prove his divine origins he must cross through a volcano, survive a massive storm, defeat Cerberus, a massive snake, Hydra, avoid Medusa’s gaze, and slay all of the Stymphalian (man eating) birds. Once Hercules clears all of these tasks, he must do so again simultaneously. While completing these trials Hera will taunt Hercules and call him a b*stard. 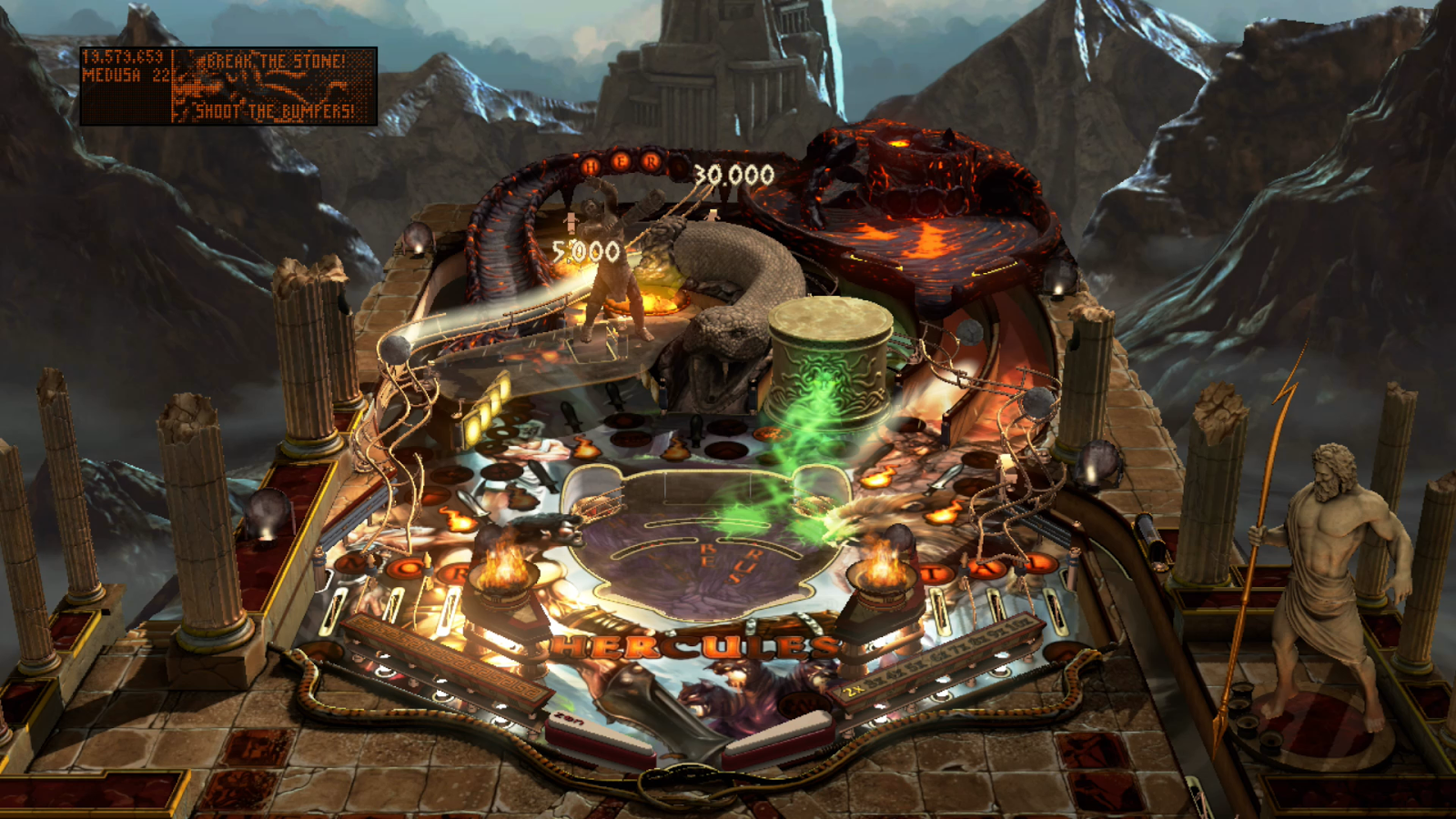 Adventure Land is a family friendly carnival themed table that has a lot of detail and mini-games inside of it. I like the roller coaster zooming along the table as you are playing on it. There are plenty of opportunities to unlock various mini-games by spelling out words like "line", "twin loop", and "tire less". If you play your cards right, you can unlock up to four balls to control at once!

The visuals are nice and I like the detail in all of these tables. Though I did experience some temporary slowdowns, it did run reasonably well on the Switch. My more powerful PC even slows down occasionally running FX3. I like the option to play vertically though it has its downfalls in that mode. The menus are significantly harder to navigate and the controls are less comfortable. The rumble feature is a nice touch though.

Since the base game is free to play it’s worth checking out. As of this review there are thirty tables available for purchase with many more coming in the near future. If you’re a fan of pinball games you should consider adding this game to your Switch library if the magic use, ghosts, and language don’t bother you.