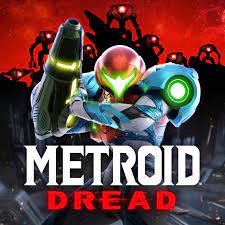 Metroid Dread, or Metroid 5, is a direct sequel to Metroid Fusion, also called Metroid 4, which was released a bit over nineteen years ago on the Game Boy Advance. I've always enjoyed Metroid games, and played a lot of the original and Super, but Fusion is the first game that really 'clicked' with me, and I fell in love with the series even more after that. I went back and played (and beat) most of them, and it’s wonderful that Samus Aran’s story has finally moved beyond Fusion chronologically. Samus Aran is Metroid’s female protagonist, a powerful bounty hunter who also has a knack for saving the galaxy from extinction-level threats over the years.

Being one of my favorite series of video games, I had to buy Metroid Dread right away - and even got the Special Edition, which I almost never do. Metroid has meant that much to me over the years; it's an expertly-crafted series of games that has had an immeasurable impact on gaming as a whole - enough to have a subgenre of games named after it, called ‘Metroidvania’, commonly named after Super Metroid and later 2D Castlevania titles. As a reviewer, I rarely have time to play games that I buy, but believe me, I made sure to play Metroid: Dread. I even bought the amiibo!

For those less familiar with the series, Metroid was one of the first side-scrolling games to explore non-linear exploration; that is to say, you can explore your environment in any direction, and progression can often be blocked by upgrades that you discover later. This leads to a design that includes lots of backtracking, and perhaps even sequence breaking for more advanced players. Bosses are scattered throughout the world, and defeating them usually grants you new powers or access to new areas, though not always. Games in the ‘Metroidvania’ genre continue these design philosophies, and have spawned countless other games with a similar play style. Given the relatively sparse releases of 2D Metroid titles, Dread’s announcement and release brought about considerable hype, and thankfully, Dread has lived up to it.

The last 2D (side-scrolling) Metroid title was 2017’s Metroid: Samus Returns, which was a remake of the classic Metroid II: Return of Samus for the Nintendo 3DS. Nintendo chose the Spanish development studio MercurySteam for that title, and it paid off handsomely, with that truly excellent title, reviewed here (https://www.christcenteredgamer.com/reviews/handhelds/3ds/6658-metroid-samus-returns-3ds). With one great Metroid game under their belt, it was finally time to achieve the vision Nintendo had in mind for over fifteen years – to complete Metroid Dread as they originally envisioned it. 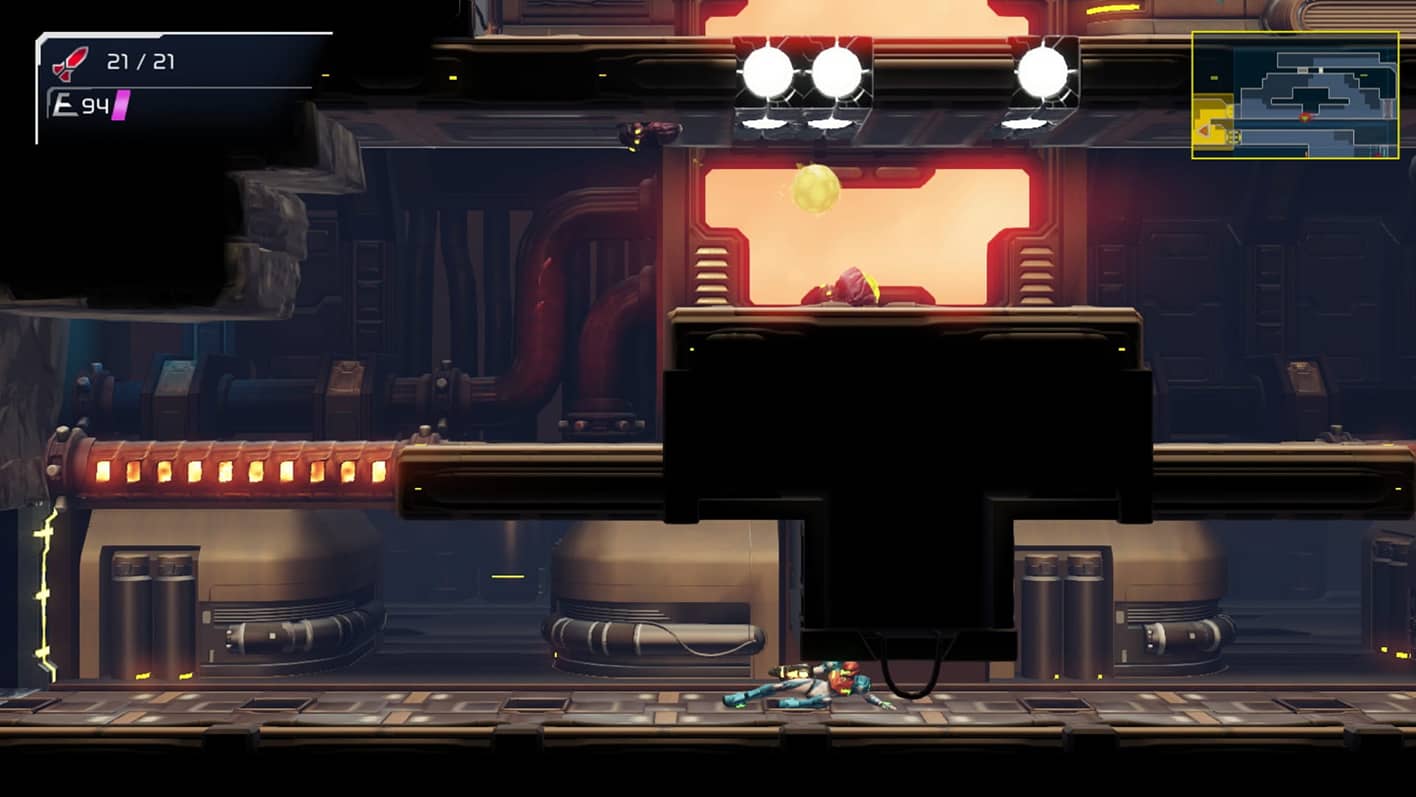 Strong Points: Thrilling conclusion to the story arc started with the original Metroid; very pretty environments and special effects; great music and sound effects; hectic and interesting combat; very challenging, with bosses who are tough as nails
Weak Points: Very challenging; E.M.M.I. sections are not my favorite, and caused a frustrating amount of deaths
Moral Warnings: When Samus dies you see her suit shatter and see her trademark 'Zero Suit' body suit; you shoot and kill lots and lots of enemy aliens that are out to get you; E.M.M.I. scenes can end with Samus being impaled; some enemies splat colored blood when killed

Dread starts with the Galactic Federation receiving a transmission from the planet ZDR, with video showing a possible outbreak of the X parasite, a dangerous organism that can consume any living being and clone them, which quickly wreaks major havok on any potential investigation team. This parasite could easily threaten the entire galaxy. The X’s discovery, and what they thought was their initial extermination, was covered in Metroid Fusion. While playing that game before Dread is not required, it is definitely recommended.

At first, the Federation sent their powerful E.M.M.I. robots to go investigate; these nearly indestructible forces arrived on ZDR, but stopped sending data after a short while. Not knowing whether the E.M.M.I.s were hijacked or destroyed, they have no choice but to send Samus Aran, the only soldier immune to the X parasite after the events of Fusion, to go investigate. What she finds is a bit more than she expected.

While I would rather not spoil the main story, and I won’t (it’s really great, and evolves the character of Samus significantly), what I will say is that it doesn’t take long before Samus is attacked by her first encounter with an E.M.M.I., which quickly sets the tone for the game. No weapon in her arsenal has any chance of even scratching an E.M.M.I., so Samus must learn to avoid them at all costs, as even getting close to one is certain death.

Avoiding E.M.M.I.s is no easy task, and was the source of a considerable number of deaths for me, probably more than most bosses combined – and those aren’t exactly easy, either. Thankfully, it tends to get better as you gain more movement skills, but it’s a definite struggle for a large part of the game. Thankfully, they are isolated to their sections – that is to say, once you find your way out of an E.M.M.I. section, you can continue to explore freely. Your goal becomes one of finding a way to avoid or even counter the threat posed by them. Succeeding in doing so is often another means of gaining more power as well as more areas to explore freely with much less danger, but even more powerful threats await, keeping the sense of dread high throughout.

What’s interesting is that the order of upgrades in some cases has been shuffled around significantly from the pattern established in earlier titles. This means that a few notable upgrades that most Metroid games start you with aren’t available at all until the second half of the game! It’s one of several subtle changes that adjusts your expectations compared to other titles, and keeps you on your toes.

Being made by the same developers as Samus Returns, the melee attack/counterattack also returns in Metroid Dread. Not only do certain normal enemies basically require you to use it to beat them for most of the game, but some bosses can’t be defeated without triggering their stage progression cinematic, which often requires correctly-timed melee counters. I also noticed that if you have a display with a lot of processing lag, this can really mess up the timing of those counters. I found my game performance to improve noticeably when disabling the streaming device that added extra frames to my display lag. Even still, I enjoyed my time on the stream, even if I couldn’t beat that boss until after I stopped streaming. Here it is:

I enjoyed the game the most in the second half, where you start to get more and more powerful new equipment that allows you to get places much more easily. Actually, thinking on this, I think this may be true of games in the Metroidvania genre in general – the second half of the adventure is often much more fun than the first. And here, the payoff for sticking through the tough parts of the adventure are more than worth it – we have arguably the biggest growth to Samus’ character since the beginning of the franchise. The producer of Metroid stated that this game completes the story arc started in Metroid, and continued through Metroid Fusion, to be completed here in Dread. And having beaten the game, I can certainly see why he would say that.

From an appropriateness standpoint, Metroid Dread has a bit more suspense and intensity than some of the other entries, but less time seeing Samus in objectifying ways. When she dies, you see her suit shatter, and see the woman with her form-fitting Zero Suit underneath, but there isn’t much detail. Other titles in the series show her in a bathing suit if you beat the game fast enough; that tradition is not continued over into this one.

The heightened intensity mentioned is usually in the form of seeing a spike go through Samus’ armor/body, in the form of E.M.M.I. catching up to you. Some aliens splat some colored blood when injured, though not all do this. Thankfully all enemies are generally some kind of alien. Regardless, I can see why the ESRB rated this game Teen. At the very least, it’s as tough as nails, so children may find it too frustrating to enjoy regardless.

Metroid Dread is in some ways the best Metroid game yet, with the incredibly fast-paced exploration and combat, and gorgeous visual and sound design that ranks near the top in this generally simple-looking genre. And yet, some small issues, mostly around E.M.M.I. and maybe melee counters (in my opinion) prevents this game from being perfect. Nevertheless, it’s still absolutely excellent, and definitely worth playing. I would encourage you to play the other Metroid games first if you can, especially Fusion – but given how difficult it is to actually find a legal copy unless you are a lucky Wii U owner, it’s forgivable to just dive right into this near-masterpiece. It’s definitely one of the best games I’ve played this year, and deserves a respected place in the Nintendo Switch’s library.