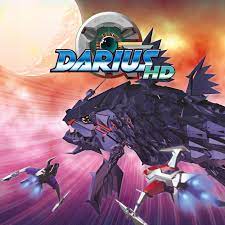 Thank you Taito for sending us this game to review!

I've come to really enjoy the Darius series as of late. First, with the Darius Cozmic Collection Arcade, I got to see all of the arcade games that made Darius what it was. More recently, I got to review the (currently) latest Darius Arcade game, Dariusburst: Another Chronicle EX+. G-Darius HD is a high-definition (HD) update for G-Darius, the only Arcade game not covered in the other collection or standalone games I reviewed. From what I have played, it's definitely a solid entry that expands the formula in interesting ways that other games didn't carry on – making this one stand out.

It has to be said that, unlike the original Darius (or Dariusburst: Another Chronicle), this game does not sport an ultra-widescreen aspect ratio. It was originally released to Arcades in 1997, and it has only a single screen visible, not unlike its direct predecessor, Darius Gaiden. But to make up for it, instead it introduces two new mechanics: Burst Counter (which is carried forward into Dariusburst: AC), and enemy ship capture, which is still unique in this game to this day.

For those not familiar with Darius, it's a side-scrolling shoot 'em up where you blast enemy spaceships (and space fish) out of existence as you defend humanity. Like most others, at the end of each level, you can choose one of two levels to go to next, making a multi-level branching set of levels to play through. Unfortunately, there's only five levels deep worth of branches, making it a total of fifteen levels. So while G-Darius has more replay value than some shoot 'em ups in the genre, with only five choices, this means that there are only fifteen levels total to play and explore, while many other games in this series has more available.

Strong Points: Finally available to purchase easily again after almost 15 years; nice looking HD remaster to a classic Arcade game; great shoot 'em up action; ship capture mechanic is awesome
Weak Points: Not as much content as other recent Darius releases; slow downs and even speed-ups observed while playing some of the time
Moral Warnings: You shoot at bad guy aliens that sometimes look like fish

Your ship, the Silver Hawk, has power levels that can be increased through pickups – though you don't get to 'keep' them unless you raise a rank's worth without dying. There are three types of pickups: 'missile', 'bomb', and 'arm' (short for armor). The amount of pickups needed to morph to the next type differs between types. You only get to keep whatever current type you have after you die – for example, if you get the six red pickups needed to get to the next level of 'missile', you can keep that upgrade when you die – but powerups are lost if you only got five, or even seven – anything past six is lost too, unless you manage to get to the final 'missile' power stage. Thankfully, pickups are common and easy to get, so if you do well enough in the earlier levels, it can really pay off later when the stages get crazy.

To encourage replay value, you can chase high scores, and there is an online leaderboard for that. There are also achievements, some of which are quite interesting. But I found the real draw, and source of most of the replay value, is the capture system. Part of it is the Capture Gallery – this is an achievement-like system where you get credit for capturing each and every creature type in the game. It's cool! But also what's neat is the gameplay aspects to the capture system that make it so much fun.

In order to capture an enemy ship, you need to hit them when they are vulnerable with a Capture Ball. For the vast majority of enemies, they are always vulnerable – just hit them with the ball. But what's really cool is when you capture a miniboss. When you get one of these, you gain some serious firepower – and if you can manage to keep it long enough to make it to the final boss of the level, then you've got a real leg up.

Each captured enemy has their own unique formation near or around your ship, and some offer defensive or offensive bonuses. Some will stay stationary, while others will circle or follow you. Each of the sixty enemies you can capture will do something slightly different from each other, and all are helpful, even if you don't prefer their immediate effect. Why? Because you can always expend them in very powerful ways. The first way is to simply detonate them. This allows you to do a fair amount of damage to anything in the blast radius, and to quickly dump a capture if you see another one you would prefer. The more powerful and useful blast you can do is to absorb them by holding down the single fire button (these console ports have rapid-fire buttons – very handy) to charge and then release the Alpha Beam. This is very powerful, and does tons of damage to bosses, or can clear the screen very quickly otherwise. Bosses will also fire a similar shot at you, called a Beta Beam; if you manage to hit their beam with your Alpha Beam, the shot can absorb theirs and do insane amounts of damage to that boss. This is called a Counter Beam, and I can't overstate how much fun sending these huge blasts at powerful foes can be; by pure chance I was able to do so on our stream; feel free to watch it above (the Counter Beam action happens about fifty two minutes in).

G-Darius HD is honestly really great fun, and the capture mechanic makes it really special. For the relatively small level count and lack of ultra-widescreen, it makes up for it in the varied and unique gameplay that the capture mechanic brings. It's also relatively clean morally, with you and your ship blasting space aliens that are sometimes shaped like fish. Not much else wrong, there. Graphically, the HD version definitely looks nicer than the also included Arcade original, though on Switch at least, I feel like it would look even better if it could have been scaled even higher. I did experience an odd slowdown or even speed-up on rare occasion, though it is my understanding that the original Arcade version had issues like this, too.

If you're already a Darius fan, I think it's a no-brainer – pick up G-Darius HD when you can. I mean yes it's pricey, and a sale would definitely help, but there is enough to keep you busy if you enjoy replays and achievement hunting. But if it were me, I probably wouldn't start off those interested in checking out Darius for the first time here, as this version is different enough to the rest that it's not entirely representative of the series as a whole. Nevertheless, if you're a fan of Darius games already, or want to just play something different because the capture mechanic seems like so much fun, and it is, then check out G-Darius HD. I know you'll enjoy it!