Enemy reinforcements are on the way. We\'ve got five minutes to take down their communications tower and plant the explosives in the heart of their HQ. They\'ve got quite the armory, and it\'s not going to be easy, so get your squad organized and bring honor to your name.

Such is the setting for battle after battle in Zipper Interactive\'s MAG. At first glance, it\'d be easy to think MAG is just another generic first-person shooter. Let\'s be honest, capturing or defending an objective is hardly a new concept. Fortunately, in execution, MAG is so much more than just another shooter. In fact, it\'s in a league of its own.

When MAG was first introduced in 2008, it carried the subtitle of Massive Action Game. The big feature of the game was its multiplayer-exclusive design. Sure, other shooters have done multiplayer before, but MAG was the first mainstream shooter I can think of to promise 256-player support in a single match.

Cutting out single-player content almost entirely (except for very short training missions that teach the basic controls) was a bold move for Zipper. Lackluster though some of them may be, most console shooters include some kind of campaign. Against the odds, MAG proves that a campaign isn\'t necessary to make a good game. Still, it more or less alienates potential buyers who can\'t, or simply don\'t like to, play online.

Then again, I\'m not complaining too much. MAG is a game that knows what it is and makes no claims to be anything else. In place of a story, the game is given a basic premise of a near-future scenario in which military matters are handled by a few private military contractors. The battles in the game take place between three contractors, each with its own origin and specialties. In all reality, the premise is little more than a foundation upon which the gameplay rests. 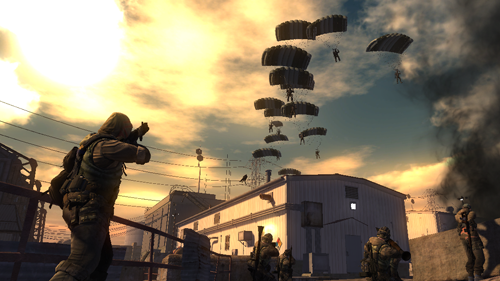 Strong Points: Online play is exceptionally smooth; framerate is excellent; team-driven mechanics work very well; gameplay feels right; RPG-like elements add depth to the game
Weak Points: No substantial single-player; somewhat dull graphics; can only be part of one faction; not a great deal of variety; not enough music
Moral Warnings: Gameplay revolves around shooting, exploding, or stabbing opposing forces though the portrayal is hardly graphic; lots of profanity from other players but minimal swearing built into the game

With all of this emphasis on gameplay and multiplayer design, it had better be something special, right? Thankfully, MAG really is special. The game has a handful of game modes, though most of them have to be unlocked by leveling up (more on the leveling process later). Most of these are objective driven, but there is a standard team deathmatch mode for those who just want to shoot things. Team games have been done before, but never have I experienced a shooter that did objective game types so well.

In many of the game types, the maps are very large and there will be several objective markers to capture and hold. This isn\'t king of the hill, though. Take the game type Sabotage, for example. An attacking team must capture and hold two points at the same time, while a defending team does everything they can to stop this from happening. Should the attacking team hold both objectives, those become permanently locked for the rest of the match. A third point is then opened up, causing everyone to rush that single point at the same time.

Game types vary in their particular objectives, but the capture/defend mechanic is pretty central to most of them. There is also a variety in number of players per match. Players sit in a queue with others from their faction until enough people are present to form two teams. The game supports 256 players at a time, but that is only used in the Domination game type. Some games run as small as 32 players, others 64 or 128 players. As a rule of thumb, matchmaking is quick: you\'ll rarely wait more than a minute or two to get into the action. Better yet, thanks to Zipper\'s excellent netcode, gameplay remains perfectly smooth even with a full 256 player match.

On paper, it may sound like a slightly more ambitious approach to objective-based multiplayer. In practice, however, MAG truly stands apart from the crowd. More than in any other game, the importance of teamwork and sense of camaraderie is second to none. In reviewing visually stunning games, I will often say that no words can capture what your eyes will. In MAG, personally experiencing the giant battles and being part of a breathing squad is the only way you will be able to fully appreciate it. 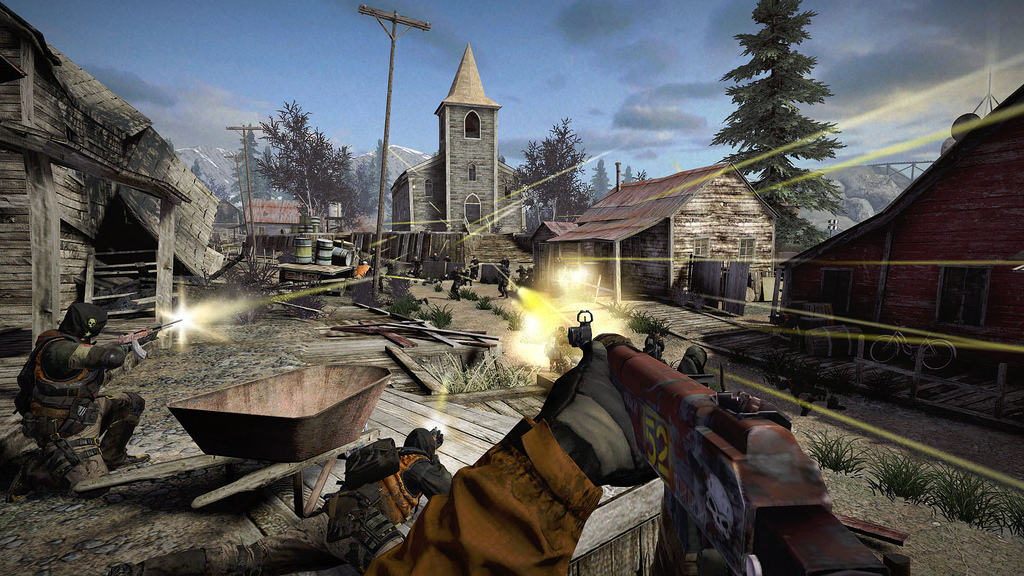 It\'s worth saying at this point that the sense of urgency and teamwork that MAG provides wouldn\'t hold up well if the game didn\'t handle equally well. Fortunately for us, Zipper Interactive is the company behind the long-praised SOCOM series, and they know a thing or two about making war games. As a result, the controls are spot on. If you\'ve played a console shooter in the last few years, you\'ll be right at home here. Controls are tight, responsive, and simple. By the end of the ten minute controls training, you\'ll be just fine with the basics.

For better or worse, those short training sessions are all that you\'ll find in the game. If you want to step up your skills, it\'s going to take training on the field and talking with experienced players in-game or on the MAG forums. Speaking of talking with others, there\'s no time like the present to get a headset if you don\'t yet have one. You can get by without talking with teammates, but communication will help your teamwork a lot.

That said, as a warning to those with sensitive ears, MAG has very little profanity built into the game (an occasional "dang" or "hell" will be muttered and some uses of "jerk" and "jag off" in friendly fire), but many of the people playing online know nothing of self-censorship, and you may hear a whole lot of profanity in some matches. Of course, you can always block or mute those who cuss up a storm or just turn off the sound.

Sadly, turning off the sound won\'t do a lot to hurt your experience. The sound effects, the firing of weapons, the explosions, they all sound well and good. Character voices do little to enhance the game, though. Perhaps worse is the general lack of music. What music there is in the game is actually pretty catchy, but it\'s used sparingly for dramatic effect. It\'s just unfortunate that it\'s used so little. 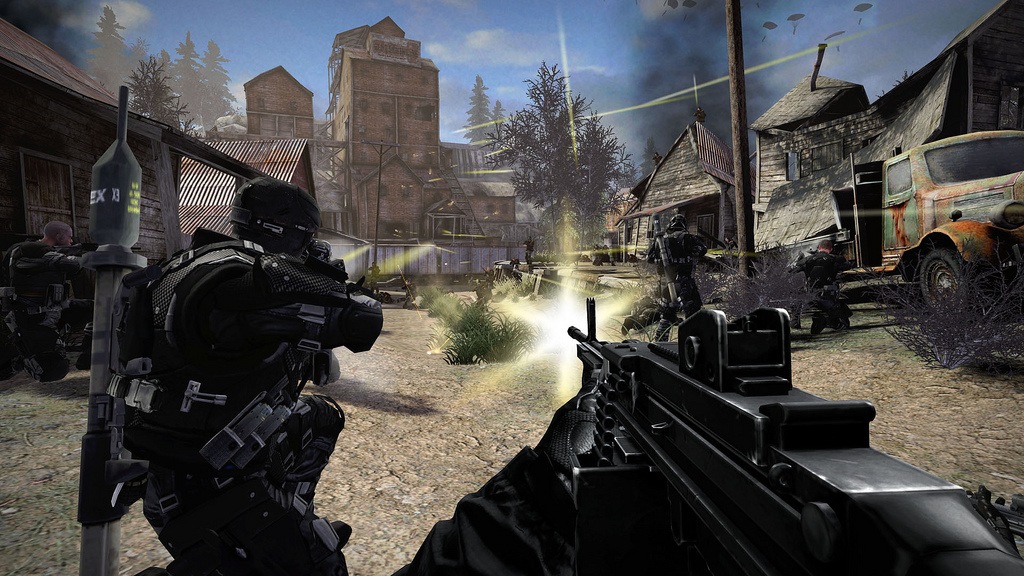 Anyway, even though you will spend most of your time in battle, there is more depth to the game than simply shooting enemies and taking down objectives. At the end of every battle, you will gain experience points based on how you performed. Those experience points go toward your character level, now capped at level 70. With each level gained comes more skill points and the ability to purchase new gear.

Since the recent release of MAG 2.0 (the latest game update that is downloaded freely from within the game), the way skills and gear work have changed. Now, with each level you gain, you receive a skill point. Skill points can be applied to any of a number of skill trees, in order to make a soldier that suits you. Want to get fallen squadmates back into the battle? Take from the healing skill tree. Want to sprint longer distances? Apply some points to the athleticism tree. The skill system is well-designed and creates a near RPG-like feel of customization. Of course, if you don\'t like what you\'ve got, for a fee of in-game credits, you can undo your selections and build from scratch.

Additionally, as you receive those in-game credits, you can apply them in the game\'s Supply Depot. In the shop, you can buy new weapons, upgrades, tools, and wardrobe pieces. Once you\'re done shopping, you can create preset character templates to choose from while on the field. There are limitations to what your templates can carry for the sake of game balance, but it\'s nothing too restrictive. It\'s a pretty simple and effective system overall, but it definitely adds depth to the game.

Still, for how much I love this game, I think that there are two chief disappointments. The first is that the level of detail in the graphics is not exactly top-notch. With how big the maps are, and with how much is going on at a time, some detail had to go in order to maintain a solid framerate (which I\'ve never seen stutter). The game still looks good; just don\'t expect to be blown away by the visuals.

The other complaint, which I consider a much bigger issue, is that the game divides its populace up into three factions. You can choose which faction to be part of, but you are locked into that faction once you\'ve chosen it (you can delete your character and start over in a new PMC if you want, but that means losing your hard work). The idea is that this instills a sense of team identity in the players, and that may be true, but it\'d still be nice to be able to join in other factions. Then again, as of the recent update, you can now create up to three characters per PSN account, but there is a monthly fee if - and only if - you want to utilize a second or third character slot.

While not exactly a complaint, it should come as no surprise that MAG, a military shooter, involves massive death tolls. Though this is probably the tamest real-world shooter I\'ve played, be aware that there is definitely a high body count. Squadmates writhe on the ground after being shot, waiting and hoping for a medic to come patch them up. Despite the ability to be shot, stabbed, blown up, or run over, there is no gore in the game, and blood is limited to nondescript sprays when shot. Still, violence is definitely central to the game, even if the deaths are not glorified.

When all is said and done, MAG is not a game for everyone. Those put off by the cussing of fellow players or the high body counts ought to stay away. Moreover, if online play is not your cup of tea, the game will not likely change your mind. Still, it managed to change mine. I\'ve never been a big fan of shooters or online gaming, but the intensity and cooperative nature of the battles has made me a fan of MAG. The exceptional netcode, which doesn\'t even flinch when playing with people internationally, makes it even better. With the recent 2.0 update, no sign of an end to the game updates, and the move to Greatest Hits status, now is just as good a time as any to pick up this shooter that stands apart from most of what\'s on the market.

Reviewer\'s Note: In addition to major changes to the skills and customization systems and so on, MAG 2.0 included support for Playstation Move. Unfortunately, due to a lack of hardware, Move functionality cannot be put to the test at this point in time. Because of this, the review does not reflect Move support one way or the other