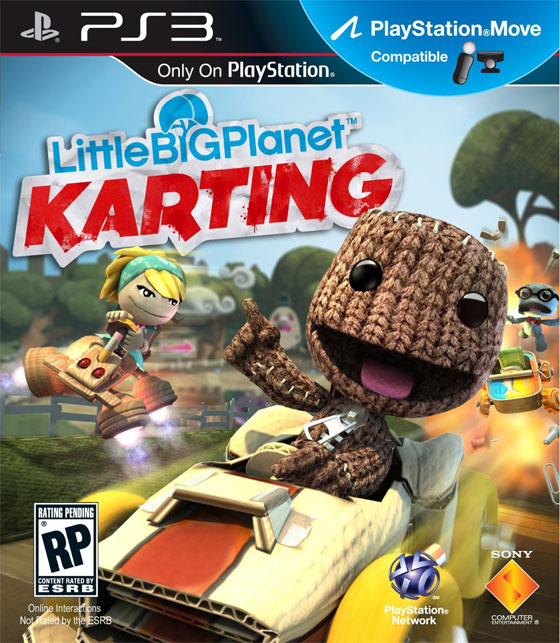 The game’s basic formula is the same as the other LBP games: Play, Create, Share. You can play the story mode (or other people’s levels via the community), or create your own race tracks or battle courses and share them online.

The story mode, like the first LBP game, is really more of an example of what you can do with the level builder rather than an attempt to come up with a really interesting plot. A gang of evildoers called the Hoard are terrorizing LittleBigPlanet, and it’s up to your character, Sackboy (or Sackgirl) to stop them. The Hoard seems to always be riding karts, so catching up to them on foot is impossible. Realizing this, Sackboy takes a kart from a Hoard member (who just happens to fall into a flame pit) and drives off to stop the Hoard. There are a few appearances from the (literally) cardboard characters of LittleBigPlanet, but unfortunately, none of the more entertaining characters from LittleBigPlanet 2 return.  Though technically it’s not bad, the story mode feels like a step backwards from the second game.

LittleBigPlanet Karting’s gameplay has often been compared to ModNation Racers. That would make sense considering it was developed by the same company, United Front Games. Though I have not played ModNation Racers, I’ve done enough research on it to say that they definitely have their similarities. Since I haven’t played it though, I can’t say for sure how similar they handle.

Strong Points: Mario Kart-like gameplay is very fun; customizable characters, karts, and levels; detailed, yet colorful graphics; level creator allows you to make almost anything; short community loading times; the narrator
Weak Points: Respawning takes too long, performing tricks is harder than it should be, character customization isn’t as polished as the previous LBP games, level creator is mind-boggling at first, some of the music is annoying
Moral Warnings: Cartoon violence

The basic gameplay plays a lot like Mario Kart. You’re put on a track with about seven other kart racers and try to cross the finish line three times first. Some levels are not races, but battles. In these levels, you’re put in a small space with other racers and try to hit each other as many times as possible to earn points. The racer with the most points wins. Like the other LBP games, you’re able to collect score bubbles and prize bubbles, which unlock content that you can use in create mode. Hitting the R2 and L2 buttons on the ground allows you to slap your opponents in the direction of the button you pressed. This really doesn’t give you any real advantage, but gives you a good laugh. You can also spin left and right in midair using the R2 and L2 buttons. If you run over creatinators (gun-like helmets that work like item boxes), you get a weapon that can either hit enemies or give you a boost. What I especially like about the gameplay is that it gives you an option to choose whether you want the X button to drive or the R2 button to drive.

The gameplay is fun, but isn’t as polished as I would have liked. Though it is for the most part well constructed, there are two things I would have liked to have been improved.  First, respawning takes too long. Most of the weapons you use destroy the driver you hit, as opposed to items in games like Mario Kart where they just have you spin around for a second. If you get hit, respawning takes so long that you’re pretty much guaranteed to lose your place. Fortunately, if you have a weapon in your possession, you can hit the square button at the right time to stop the incoming weapon from hitting you.

Second, the ability to spin and do tricks in midair is nice, but can lead to serious frustrations. When you land from a trick, you drive in whatever direction you land in. Though it’s realistic, it can be very annoying if you land improperly. It would have been much better if it was programmed to automatically have you drive straight when you land, regardless of what direction you’re facing. As far as the actual racing part of the game goes, it is fun, but there are better karting games out there.

Of course, the basic gameplay isn’t why most people buy LittleBigPlanet games. If that were all there were to it, the franchise wouldn’t be as well recognized as it is today. The LBP games main attraction has always been the ability to make characters and levels, and LittleBigPlanet Karting is no exception. 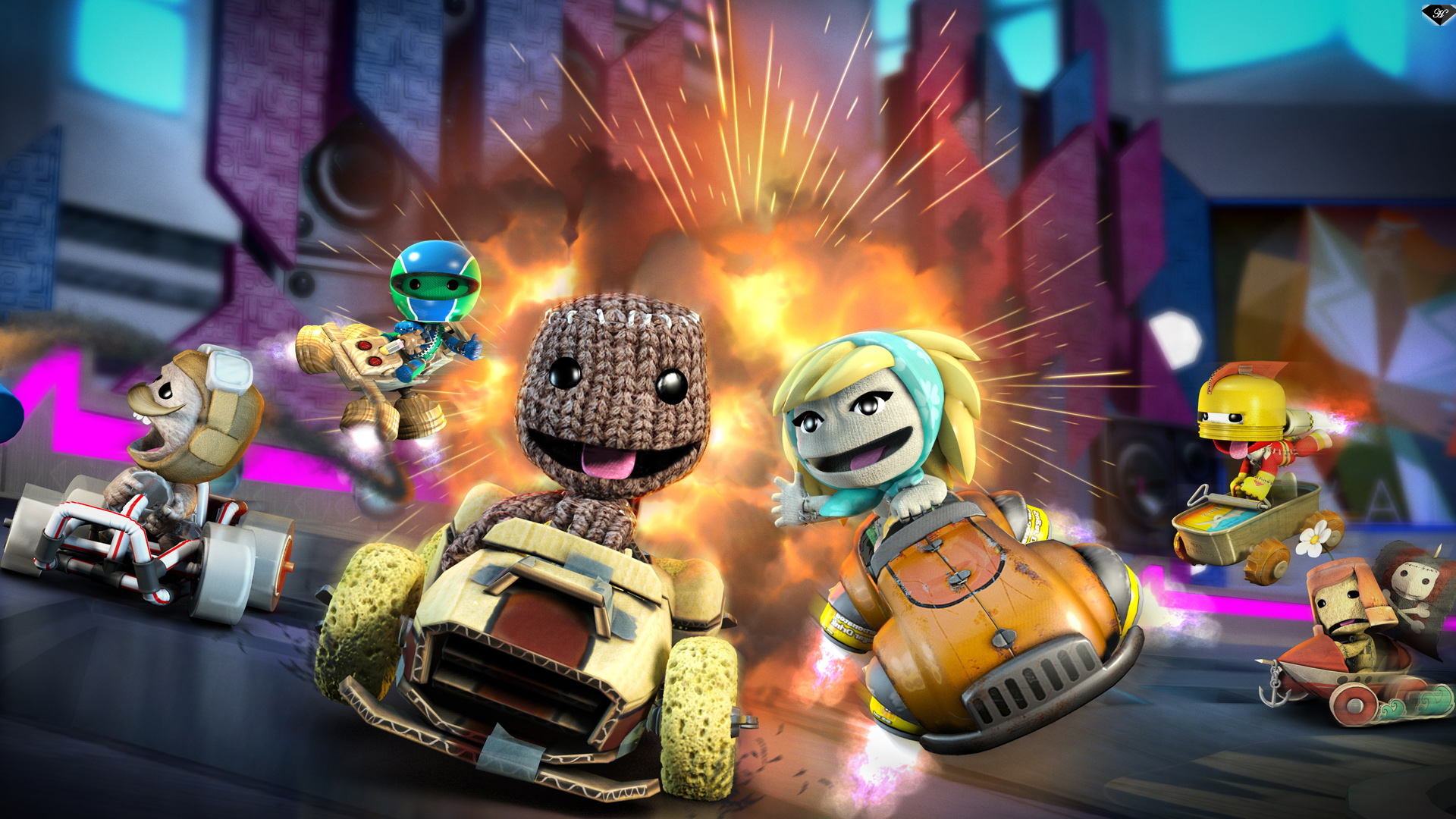 The character creator is very similar as it is in the other LBP games. You unlock many costume pieces in the story mode such as hats, shirts, and pants, allowing you to make hundreds of combinations of outfits. Unfortunately, the customization is a bit more limited that before. In the other games, you could put stickers on costume pieces if you wanted to change the color. In Karting, you can still put on stickers, but they will likely touch the whole Sackboy, as opposed to the particular costume piece. Because of this, I haven’t been able to remake very many of the costumes I made in the previous games.

In Karting, you can customize your kart. Like the character customization, you unlock different kart pieces in the story and are able to make several combinations. You can select the body, wheels, chair, steering wheel, and type (such as hovercraft or tank). As with the costumes, sticker placement isn’t as good as it should be. Fortunately, almost all of the downloadable content (DLC) from the previous games can be re-downloaded into Karting, allowing you to play as your favorite DLC characters again. Also, Karting has been getting its own DLC which allow you to buy new karts for the game.

In regards to customization, Karting’s main attraction is the level creator. It works very similar to the other LBP games, but with some differences. The most noticeable difference is that it is in 3D, as opposed to the other games where it was 2D. Some of the controls are different, which takes some time getting used to, and the entire concept has a pretty difficult learning curve. Fortunately, the tutorials it comes with are very helpful, and before you know it, you’ll have a fully functional track (or battlefield) to enjoy by yourself or with friends.

The multiplayer is pretty good, but has some rather odd flaws. (As I have not tried the online multiplayer, I will only talk about the local.) The first being that if you have more than two friends playing with you, the races you do will not include the other CPUs. Playing two-player is fine, but it still kind of takes the fun out of racing with more than one of my siblings, since we’re the only ones on the track. The second is that unlike LBP 1 and 2, other players can’t sign in with their PSN account. That means that if they have their own custom karts or characters, then they would have to remake them on the profile they’re on.

I’ve had some rather unpleasant experiences in regards to its stability. While building levels, sometimes the game would freeze and I’d have to rebuild everything I hadn’t saved. One time I voice acted in a level and a glitch took away the recording. I was never able to make the character I was voicing have sound again. However, these complaints might have been fixed in a patch they uploaded before, because I haven’t had these kinds of experiences at all recently. On the plus side, the loading times on the community aren’t nearly as long as they were in the other two games. 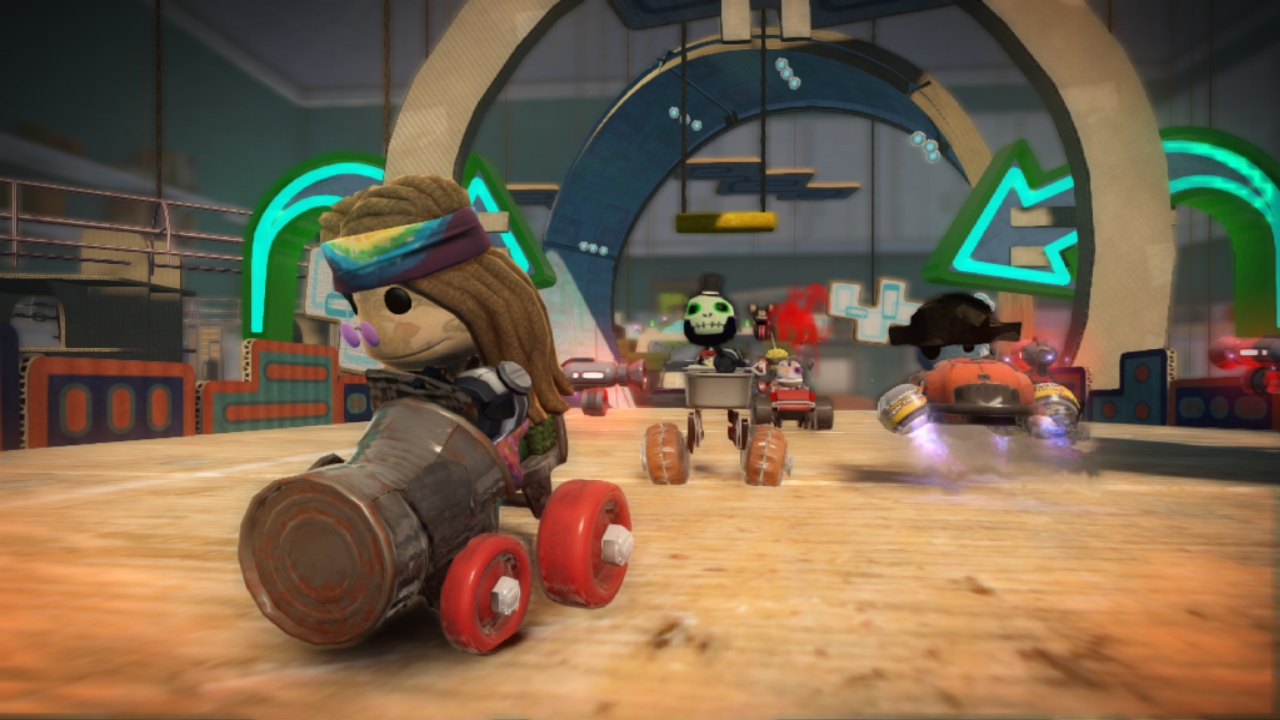 The game’s graphics find a near-perfect balance between realistic and cartoony. A lot of detail can be seen within the objects, characters, and scenery; but not so much that it takes away the colorful, cartoony look of the LittleBigPlanet series. Of course, I can’t tell if the graphics really got better, or if it seems that way because the closer camera allows more details to be seen.

The music is sort of a mixed bag. On one hand, you get most of the songs from LittleBigPlanet 2 and some new catchy ones to use in your levels. On the other hand, a good portion of the new songs are quite annoying and will (to your displeasure) get stuck in your head. I’d say that overall, the soundtrack is better than LBP 1, but worse than LBP 2. Though there is virtually no voice acting aside from some grunts and noises, it should be noted that Stephen Fry returns from the other LBP games to voice the narrator and is once again hilarious to listen to.

There really isn’t a whole lot to mention in Karting regarding the content. Like most go-kart racers, you throw items at your rivals, but that’s pretty much it.

LittleBigPlanet Karting is a fun racer that gives you multiple ways to create levels, characters, and karts. Though I have my problems regarding the stability, I still recommend this to fans of games like Mario Kart. If you already own the game ModNation Racers, I’m not sure if you should get this one. As far as I can tell, they’re very similar games. For those LittleBigPlanet fans and racing fans who don’t have ModNation, Karting is a game you should seriously consider playing.