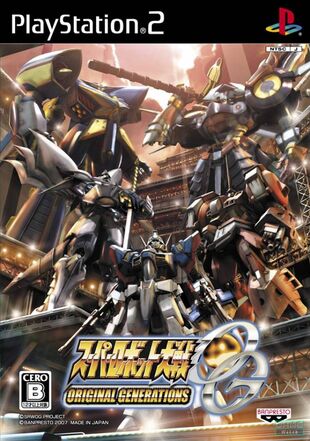 Note: This game requires a translation patch to play in English as well as either a PS2 emulator (with a legally sourced BIOS file from your PS2 and a copy of the game purchased for patching with the translation), a Japanese PS2, or a modded version in all other territories due to region locking. This review was written using the first method, please look up how to do the others elsewhere.

Some games were already good when they were released, but sometimes, the developers believe they can do better on superior hardware and so they release a massively improved version. The GBA Super Robot Wars Original Generation 1 and 2 games got this treatment on the PS2 as a compilation re-release called "Original Generations" that massively improves and expands upon the original games.

The story for each game remains more or less the same. The first game covers the rebellion against the Terra Federation in response to humanity not taking the approaching alien threat seriously. The second half is when the threat finally arrives. The "Aerogaters" are intent on subjugating Earth, and those who survived the first half must band together to stop them.

The second game is set six months after the first, as the Terra Federation tries to both fortify itself for more alien threats and hunt down remaining rebels from the first game. More than one threat both close to home and from the stars arrives to scourge not only the Earth, but now the stakes have risen to the fate of entire dimensions hanging in the balance. 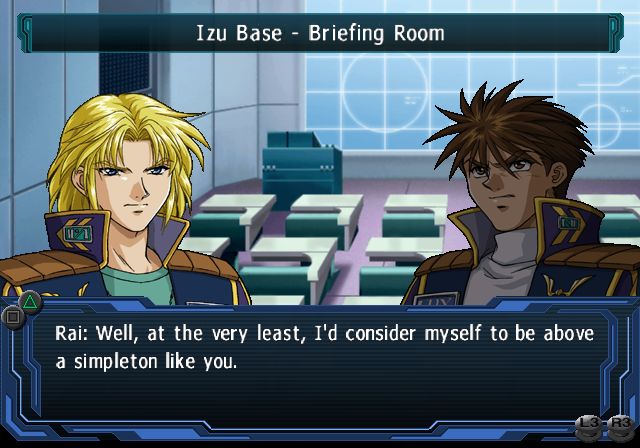 There is a bonus "mini-campaign" that serves as a "teaser" of the next chronological game, "Original Generations Gaiden", currently not in English. The mini-campaign is far harder than the previous two campaigns before it and is somewhat abbreviated from how its events will play out in OGG. It is unlockable after beating the first two campaigns only. The story is that a dark secret since the early days of the first war comes to light of a twisted system meant to defend Earth that turns on those it was to defend. It merely serves as the prelude to a new conflict which OGG covers in further detail.

The gameplay is much like the GBA versions, but with some differences. Instead of being a top-down game, it's an isometric game, and instead of using sprites, the game uses animated models of mecha units on the game maps. The gameplay remains a turn-based strategy game, and there are still visual novel style cutscenes with an intermission in-between stages to allow upgrading units and pilots.

The change from GBA to PS2 also resulted in some modifications to the engine. Instead of what was called "chain attacks", where multiple units in a straight line could be hit by the same attack, this was changed to a different system that allows some weapons to hit adjacent enemies. Two new features were also added. The first is the making of customized ammo that can be loaded on most generic weapons to give them special properties. The second is the "Twin" system, in which two units can pair up to do more damage and have access to unique abilities not available as separate units. Enemies can be twinned for similar advantages as well.

Graphically, aside from the obvious jump from GBA to PS2 level quality, several things were improved in specific ways. The PS2 replaced the limited if colorful palette of the GBA with a still colorful but more realistic range of colors, resulting in many characters who had yellow skin and anime colored hair receiving a lot of makeovers to more realistic hair and skin tones, most adapted from the Divine Wars anime adaptation of the first game. Story scenes feature waist up busts of characters with varied expressions as opposed to just faces, and while the modeled units have a bit of aliasing due to poor filtering, they look far more detailed than the GBA map units, which were based on the heads of the units in question and colored blue and red depending on the side they were on. Battle scenes feature greatly enhanced backdrops with a depth of field effect to make them less static, and animation quality for many units are miles above the GBA at its best. Some units even got new attacks and animations, and aside from one or two that are a bit underwhelming, the rest are quite impressive.

Note: I played this on the PCSX2 emulator, which can only play this game perfectly in pure software mode and is locked to 480p resolution as a result, though it can be enhanced through software-based shaders in the emulation that can smooth out the worst parts and help it upscale for larger monitors reasonably well.

Sounds and music were already good on the GBA versions, which made the most of the limited sound on those systems for chiptune style synth-rock tracks and excellent sounds for weapon effects. The PS2 version upgrades the existing tracks for much better hardware, adds a lot more music so almost everyone has a unique theme, and provides well-done voiceovers for battle dialogue in Japanese. Weapon effects sound great for the most part, but some of the impact sounds are a bit muffled as opposed to how crisp they were on the GBA games. 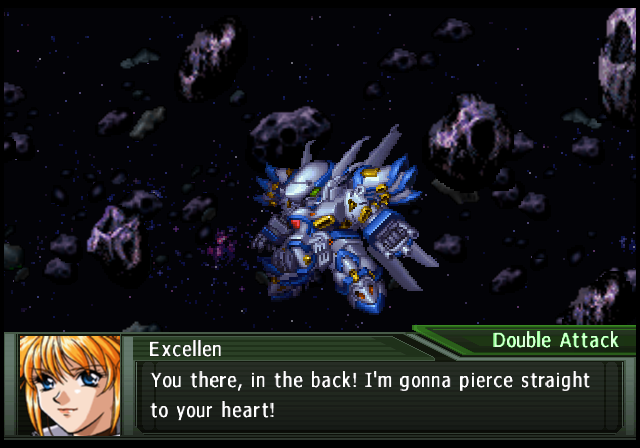 Controls are mapped as would be standard to a Dualshock style Playstation 2 controller and I found them very intuitive. My only complaint is that the mapping of the keys to check the status of deployed units on the map is a little difficult to pin down and more buttons need to be pushed to do so compared to the GBA version.

Stability is excellent on real hardware and pure software modes on the latest PCSX2 emulator builds, with all gameplay running at 60 frames per second from start to finish.

Morally, there are certainly some issues, some of which require a bit of an explanation.

Violence is of the RPG variety in which you give orders and watch it happen, against both humans piloting various machines and occasional non-human alien lifeforms. This is devoid of blood and gore and the protagonists fight back for reasons of self-defense and lawful military orders.

Language, on the whole, remains at a mild daytime TV level, with some rare b**t**d, s***, and b***h use. Given it's spread out rather extensively over three separate campaigns, the language severity only gets severe a handful of times per campaign. Sexual innuendo is present but of the generally tame variety. There is a running gag of one male character who likes to make pointed jokes about a woman's bust size, but they are usually admonished for being inappropriate.

Sexual content is mostly low, despite the fact the PS2 can show far more than the GBA games. Nigh everyone wears sensible outfits in combat or those that otherwise cover everything. One female pilot wears a leotard-like outfit due to her body needing to fit inside a cockpit with little room due to various biosensors she needs to interface with and one female pilot is made the unwilling bio core of a machine at one point. In the latter case, we get a brief and highly cropped shot of her from the shoulders up that makes clear she's naked off-frame, but otherwise reveals nothing.

In terms of supernatural and occult, while this is a sci-fi game, it does have some "magic meets technology". Specifically, one of the machines comes from another world where it is piloted by a human pilot and familiars (not in the occult sense, more like aspects of the pilot's consciousness brought to life to serve as pilots for key subsystems, the occult definition is brought up as a reference though). Another is a sentient machine called the Chokojin with its own will that chooses pilots based on their purity of heart. It is conflated with Chinese mythology in-universe due to its location, but the origins are far more science fiction and more Christian friendly.

The backstory eventually reveals that, to a considerable extent, the Biblical account of creation is confirmably real, God's existence and power are mentioned and given due reverence, and while the Biblical account has some tweaks and adjustments to fit a plot with alien species and multiple universes, none of those changes conflict with said account in any major way. Telekinesis does exist as a known scientific discipline with military application, and both it and the Chokojin exist due to the Bible-centered backstory. By proxy, nigh all sources of power save those explicitly defined otherwise hail from the same origins.

There are a few minor and brief references to the Japanese practice of ancestral veneration and similar customs. However, given the apparent monolatric view of God in this universe (other beings calling themselves gods may exist, but the Judeo-Christian one is the most powerful of all, consistent with the Old Testament), the game in question otherwise does not dispute the truth of the Bible.

Morally and ethically, this is a very military-focused game. There is a segment early on in the second game where you play as a villain faction that is rebelling against lawful authority, though it is revealed their rebellion is against authority that has become corrupt, brutal, and has law-abiding citizens living in terror. They otherwise remain as villains when no longer playable though due to the extreme lengths their rebellion goes to in response. Otherwise, your protagonists are bound to military protocol and a baseline set of morals that conform to the rules and customs of war.

Overall, this was a massive improvement on the GBA games and I recommend it highly. Morally, there are some concerning elements as noted, but any reasonably mature teenager or older should be able to handle the themes expressed.