While the world is still recovering from a nuclear apocalypse, the reconstruction of New Vegas is underway. New Vegas is by far the best looking area since the war happened. Of course, it\'s a huge moneymaker and quite the tourist trap. Whoever can control New Vegas has the world in the palm of their hand.

Surrounding New Vegas are run-down towns with gun and drug dealers, prostitutes, gangs and independent thugs. The Mojave Desert is no safer; escaped convicts, giant scorpions, and other unnatural creatures are on the loose. In these circumstances, how can a person expect to survive?

Various factions are trying to do what is right, and while some of them are helping the under-privileged, most are serving their own purposes. If you\'re familiar with the previous Fallout games, you\'ll recognize the Brotherhood of Steel faction, who are in hiding after being driven away by the North California Republic (NCR). The NCR have good intentions, but they are thinning themselves out, hindering their ability to help the common folk. They also have the reputation of taking what they want, even if it\'s not theirs to take. Caesar’s Legion offers to protect those who benefit them; however, once an ally serves their purpose, they are executed or sold into slavery. Executions are done by crucifixion, and they don’t mind killing innocents to set an example.

Strong Points: Superb graphics and voice acting; two companions can travel with you now; plenty of quests to do; lots of fun game play to be had here.

Weak Points: New Vegas was released with many quest breaking bugs. How did it pass testing?

Moral Warnings: I can’t count how many times the F word was used: I’d venture to say it uses more F-bombs than all the popular gangster movies combined; besides swearing, there is gratuitous violence, gambling, drinking, drug use and prostitution.

Both the NCR and Caesar’s Legion want to control New Vegas. To do that, they need to take over Hoover Dam, which is the power source for New Vegas. The mysterious Mr. House has been running New Vegas for over 200 years. It’s clear that he’s still alive and running things, but no one has seen him face-to-face or been inside his Lucky 38 Casino. He has an impressive computer network that controls Securitron Robots, which protect the Vegas Strip and his other interests.

So how do you fit into the picture? You’re a mere courier delivering a package for Mr. House. The pay is good, but unfortunately it almost costs you your life. A gangster clad in a checkered jacket shoots you in the head and leaves you for dead. A Securitron named Victor rescues you, and brings you to a doctor in a small town to get patched up.

Once you wake up, you’ll be asked some questions to determine your base character stats and attributes. The skill tree branches out more than your typical RPG, with strength and health attributes. There are skills for hacking computers, as well as lock picking, repairing, and various weapon and attack specialties. Every other level grants you the ability to choose a perk, which are unlocked as your base attributes increase. Some of the perks allow you to carry more, take less damage, increase your attack and so much more. If you look hard enough, you may discover some books that will permanently boost your stats by a couple of points. Magazines are more common and will temporarily increase a skill by ten points. Unfortunately, the affects of magazines don\'t stack if you’re in a pinch. 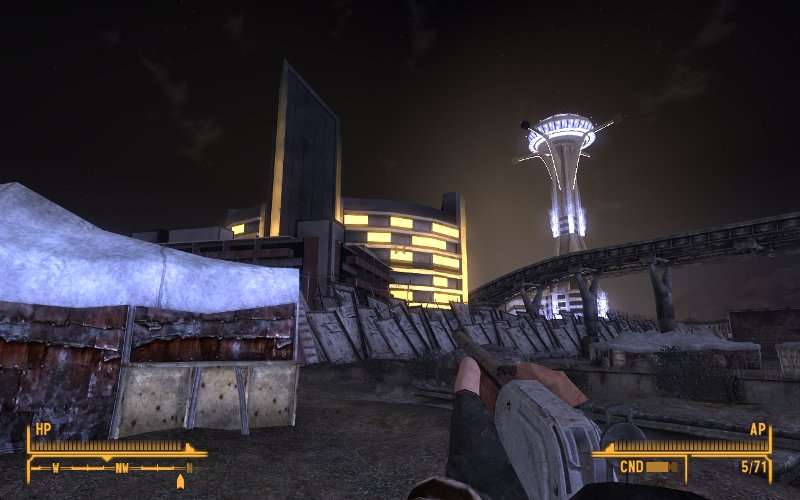 After your character is configured, it’s time to walk around town and get to know the locals. Many towns are filled with generic NPCs, but the ones with a unique name are typically part of quests or double as merchants. If your speech skills are high enough, you may be able to talk some NPCs into joining your party. Only two companions can travel with you at a time, and some of the companions are incompatible with others. The first town, Good Springs, has a character that offers tutorial-like advice, while the robot ED-E from Primm can be your first companion, if you can repair him.

Experience is earned by doing things in the game world, not just killing enemies. This can include discovering locations, completing quests, hacking terminals, lock picking and negotiating, all of which have an effect on your character and the game world. While some quests are simple, I found that a majority of the quests expand into multiple quests. For example, some factions will ask that you ally yourself with another faction in order to reach their own ends. In order for that faction to trust you, you\'ll have to complete a few tasks to prove your loyalty. One of the more memorable missions was to raise a sunken bomber plane from the bottom of a lake.

New Vegas is all about choices: there are multiple ways to play the game and multiple ways to complete a quest. In one scenario, a town called Primm is in dire need of a sheriff. You can either walk away, reprogram a robot to be a sheriff or rescue a sheriff from a prison taken over by convicts. The choices you make also affect your karma and the relationships you have with towns and factions. If you’re on good terms with a town, they will offer you discounts on supplies. On the other hand, if you become enemies with a faction, they will attack you every chance they get. Befriending a faction will result in the faction sharing their weapon caches and offering you discounts on weapons, armor and ammunition. 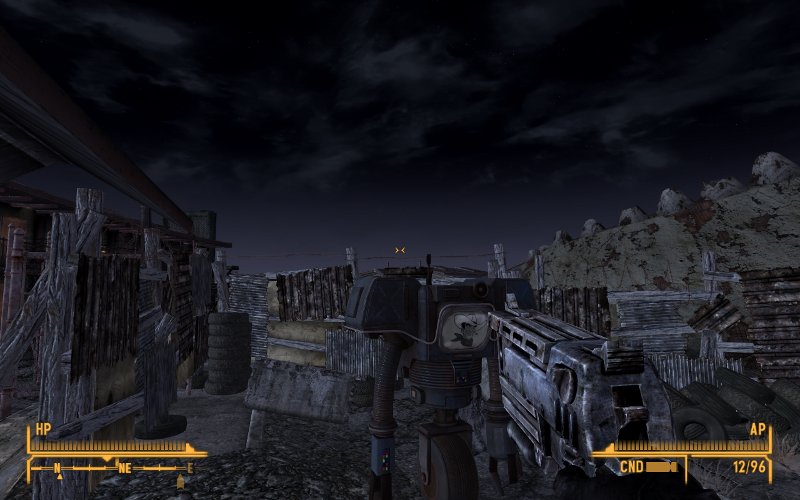 There are so many quests and areas to explore that you can easily sink sixty or so hours into this game. Just like Fallout 3, New Vegas is a sandbox Role Playing Game. If you haven\'t played Fallout 3, there are some references to the previous games but it has an independent story line. Yes, there is a main quest, but completing it in a timely fashion (or even at all) is optional. You can roam around and treat people how you like. If you\'re a jerk, your infamy will spread. If you\'re helpful, random people will come by and thank you and give you a token of their appreciation, usually with food or medical supplies. Your character is customizable and so are your weapons. There are work benches where you can disassemble and create new weapons and recycle used ammunition.

The weapons in this game are numerous. In addition to typical weapons, like variations of pistols, machine guns and shotguns, you have various fire, plasma and laser guns. If you prefer melee combat, there are all sorts of hand weapons and makeshift weapons, like lead pipes and cue sticks. Explosives are readily available, especially when you defeat a certain type of gang member. No matter what weapon you use, your chances of hitting the target increase when you use VATS (Vault-Tec Assisted Targeting System). By simply pressing the V key in battle, the attack will pause and you will see a chart of your enemy, with all the various body parts you can target. You will also see the chance of hitting them and what their health will look like if you\'re successful. Press E to accept your choice, watch the action, and repeat as necessary.

Your companions are pretty deadly if you equip them with the proper weapons and armor. Each companion has a fighting style preference and will give you a special ability while they travel with you. If you arm them with a gun, make sure you supply them with enough ammunition. I gave my friends a backup melee weapon just in case. If they are injured, you can tell them to take a stimpack, which replenishes health. Fortunately, they don’t die, they only become unconscious. The AI isn\'t perfect, but it\'s pretty darn good. It is possible to lose them as you travel, but they typically do find you or will instantly be at your side when you enter or leave a building. In battle they hold their own pretty well.

With weapons come violence, and it’s very gratuitous at that. The game often zooms in with slow motion so you can see limbs detach and blood splatter as you make a kill. While most violence is unavoidable, you can sometimes talk your way out of sticky situations if you have a high enough speech, science, or barter skill.

Many of the other sins of Las Vegas are avoidable but available. I chose not to gamble or solicit male, female, or robotic prostitutes. The prostitutes are painfully obvious, wearing tight or very little clothing. There’s a female prostitute on the Strip who is only wearing pieces of tape in an “X” on her nipples.

While the voice acting is superb in this game, which also meant that I got to hear the f-word being said or yelled at me every few minutes. Every word in the book is used and it’s used often. I understand that this is Vegas and there are many mobsters, but this game probably has more swearing than all of the popular mob movies combined. Sadly, I’m not exaggerating.

Other than all the swearing, I was impressed with the voice acting. The voices were fitting and believable. Many of the shops in the poorer towns had criers at the corner yelling slogans to drum up business. While many of the NPCs had canned phrases, they weren’t annoyingly repetitive. The Strip even had a stand-up comedian that was entertaining. The weapon sound effects and background music add a nice touch. While the background music sets the mood, it’s not memorable.

Like the audio, the graphics are well done. You can zoom out for a third person view or zoom in for a first person perspective. The characters look life-like and the ghouls are pretty hard on the eyes, while monsters are detailed and the animations are smooth. The textures look great and there are mods available allowing you to use even better textures. The only graphical glitch I ran into was a Super Mutant companion, who had a melee weapon that floated in the sky above her.

Speaking of glitches, Fallout: New Vegas was released with some pretty nasty bugs. I ran into my first minor quest-breaking bug within the first hour of playing. In my travels, I saw an NPC being attacked by mutant geckos and I killed them. Later, a guy approached me asking to help save the same girl, but I never got credit for completing that quest. That was a mere annoyance, but what boggles my mind is how a story related quest can crash the game twenty plus times and pass testing. One quest literally crashed my game to the desktop at every turn; I had to save every two minutes or lose my progress. I even had to resort to using the console to fix some broken character triggers. After doing some forum searches, I realized that I was not alone in my frustration.

Even with the glitches, New Vegas is a fun game. If you enjoyed playing Fallout 3, this game offers the same level of excitement and adventure. The mod community is active, and there is a mod available to extend the game play after you complete the main quest. New Vegas also has one of the coolest endings I’ve ever seen in a game. The ending basically summarizes the lives of your companions, factions and towns based on the decisions you have made. This way you can always go back and do things over and see a different future for someone or someplace. Unfortunately, for me, I think I’ll pass on picking this game up again or extending it with a mod. The extreme violence and language doesn’t sit well with me.