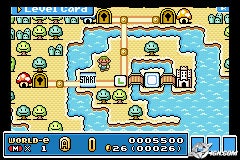 Mario has long been the king of video games. Representing everything that was, and is, wholesome, fun, and carefree to the world, plus having some really hard levels, the Mario games have crossed multiple genres and platforms, from the platformer to the RPG, from the NES to the Gamecube. This game was the final one on the NES, and the first to introduce the World Map, a staple of later Mario Bros. games, including Yoshi?s Story and Super Mario World.

This game has been completely redone. Okay, not completely. But a lot. For a game that was orginally on an 8-bit system, the graphics have been incredibly revamped to the SNES standard 16-bit. You may recognize this game from another SNES title: Super Mario All-Stars. Yes, this was on there. The graphics and effects fit the GBA perfectly, and each enemy and every world are translated impeccably onto the GBA. Every animation, every movement, and every fortress and airship have been recreated with outstanding detail, as well as upgraded graphically for 16-bit graphics.

You know the drill. Run. Jump on platform, Jump on enemy. Avoid cannons. Jump on bosses? head three times. Yes, it?s like that. Except moreso. And better.

Again, you know the drill. A is jump. B is special attack/sprint. L and R do nothing. The control pad moves. Yep. This is the life. Excellent controls all around.

Awesome sound. That is, if you love the Super Mario-theme. But it still is very good sound, probably even better than it was originally.

Okay, very little violence? Check. Mom-approved? Check. Child friendly? Check. Surprisingly fun? Check. The only problem I see here is that you have to retrieve ?magic? wands that have transformed all of the kings of the land into various creatures. But that?s in a fairy tale kind of way. So it?s not bad. Christian approved? Check.

Graphics A Gameplay A Control A Sound B+ Appropriateness B+