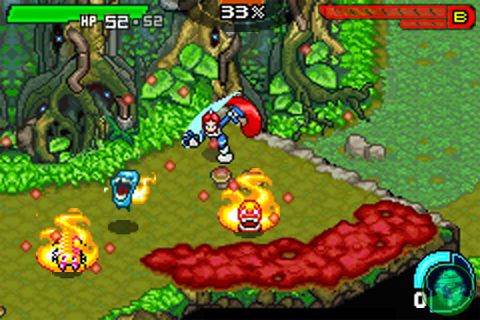 Company: Orbital Media Rated E 10+ (Animated Blood, Fantasy Violence Ridiculously long-haired bounty hunter Jenosa is usually in it for the money. So naturally, she accepts a high-paying job on a space station, despite the unusual deficit of intel on the mysterious mission. Jenosa must combat a deadly, mestasisizing disease known as the Scurge. Jenosa is given a power suit (think Samus from Metroid) that can slow the spread of the virus in Jenosa\'s body as she works in the infected station, and also has attached to her arm an upgradeable, customizable gauntlet. As Jenosa travels through the station, she must find out what caused the outbreak and defeat the source before the Scurge consumes her completely.

The gameplay is pretty solid, genuinely exciting, and quite deep. It\'s rather like an isometric version of Metroid. Like Nintendo\'s Samus, Jenosa can upgrade her suit and gadgets, and travels through a varied space station while combating nasty, otherworldly creatures. The regular combat is new and refreshing for the most part, while the thrilling boss battles have a distinct old-school feel. The game constantly tracks Jenosa\'s kills and accuracy, and awards her a rank. Eventually, her attack power and health bar will grow as she gains levels. Jenosa\'s upgradeable gauntlet will eventually have multiple firing modes, and this is where the real fun of the game comes into play. Enemies in the station are of different types, and consequently have varying strengths and weaknesses. Firing the right type of weapon will kill the enemy quickly, but firing the wrong type will raise the enemy\'s attack power. The game is a constant race against time as the Scurge slowly invades Jenosa\'s body. If the infection reaches 100%, it will begin to deplete Jenosa\'s health. Luckily, there are decontamination platforms scattered throughout the station. It\'s always thrilling when the contamination reaches critical levels and getting to the next platform is a necessity. Unfortunately, the isometric view makes lining up some shots and jumps quite difficult, and backtracking through the station to find enough keycards to open a door can be tedious. Some of the puzzles are a little too lengthy, and it\'s extremely irritating to be shimmying across a bar and then fall all the way down to the ground when damaged by an enemy. Unlockables include a boss rush mode, a new costume, and more.

I was very impressed with the graphics, with a very high pixel count, a full palette of colors, and very little (if any) pixelation. There was a very large amount of animations. When Jenosa is behind an object, she has a silhouette, which is a relief. When Jenosa is killed, the screen turns black and white, flickers, and then a burst of static ends the game. I thought that was a very cool little effect.

Another brilliant aspect of Scurge: Hive is the audio, which is of the highest quality. Jenosa grunts when hit, her footsteps can be heard hitting the ground, and explosions and zaps sound perfect. The music went from mysterious sci-fi, to hair-raising electric piano (?) to...metal. Yes, that\'s right, crisp yet slightly repetitive metal was coming through the speakers. Some sound bits get to be a little repetitive. A cool twist was the sound of a heartbeat every now and then, particularly when the infection got more powerful.

This game sported very tight and responsive control and comfortable configuration, despite the sometimes-awkward isometric viewpoint. However, switching weapons was a little awkward. The player must hold R and then use the control pad to select the weapon. This gets harder, because there are eventually eight weapon types to choose from, gathered in a circle. On the bright side, the game does pause during weapon selection, so the player has as much time as he or she needs. Also, switching back to the standard weapon type requires tapping the R button while pressing a direction on the control pad. Once or twice, I accidentally switched to another specialized weapon on accident. To jump from one bar or ledge to a higher one, the player must press A to jump, then again to grab the bar. Several times, I messed up my timing and missed the bar. It didn\'t kill Jenosa or even harm her, but it got extremely irritating after a while.

Why can\'t all games be as stable as handhelds? Scurge: Hive had no bugs, save for the ones you must splatter in the gameplay, which brings me to...

Violence - Killing non-human, fictional beings (-3.5 pts) -Small blotches of slime/blood (- 1) I was actually surprised by the level of violence in Scurge: Hive. When an enemy is hit, it explodes and a small splat of bluish-green "blood" hits the screen and slides off. It looked more like pudding, however (in fact, it took me a couple of hours to register that it actually was blood). On a positive note, Jenosa does not bleed at all. A slightly disturbing twist: in the unlikely incident that the Scurge completely consumes Jenosa and manages to drain her health to zero, her suit splits open and she is a strange, mutant-like creature that looks up at the screen before the game reloads. I would not recommend this game to players under 13, despite the E 10+ rating. Language -Mild swear words used once or twice (-2) Jenosa says d*** a few times, and I\'m pretty sure I heard h*** once or twice, too. Sexual Content -None Jenosa\'s tight suit could be considered "revealing", but since you can only tell in the cutscenes (which can usually be skipped and contain quick-cut, passing images of Jenosa), I won\'t deduct a point. Occult -None Cultural/Moral/Ethical -None Jenosa is in it for the money, but she realizes she must accomplish the mission for her sake and everyone else\'s.

Scurge: Hive was an immensely enjoyable, if a tad short, Game Boy Advance game. It gave me a reason to dust off the old handeld for a bit of fresh shooting action. Teenage and adult fans of Metroid should not give it a second thought and pick up the game right away.