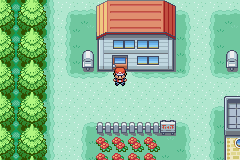 Pokemon FireRed is an updated version of Pokemon Red, and has a few additions. The main difference (other than the improved graphics) are the new Sevii Islands, seven new islands off the coast of Kanto, which are home to some Gold and Silver pokemon.

Your story begins in Pallet Town, a quaint little village in the region of Kanto. Here you will begin your adventure by receiving your first pokemon. Your goal is to become the ultimate pokemon trainer by defeating the region's eight gym leaders and then braving every trainer's ultimate goal; The Pokemon League! Along the way you will encounter biker gangs, dark caves, and the evil organization known as Team Rocket.

Pokemon FireRed is an RPG, so you have two screens; the gameplay screen, in which you move around, find items, and generally progress in the game, and the battle screen, in which you battle other trainers and wild pokemon. In the gameplay screen, you run around, encounter trainers, navigate waters, solve tricky puzzles, and talk with the people around you. While in the gameplay screen, you can access the start menu, where you can find the bag, where your items are kept, your pokedex, where you can see the pokemon you've caught, and the ones you need to catch. You can also access your party pokemon, move them around, give them items, use certain moves, and teach them new moves. When you enter a battle with a wild pokemon or a trainer, you will go into the battle screen. Then you will be able to attack using the moves that your lead pokemon has learned, swap to a different pokemon, access your bag, or run. (you can't run from trainers, only wild pokemon.)

The gameplay is pretty simple, you run around, walk through doors, push 'A' to interact with stuff, push 'B' to back out of menus, and when you run through the grass or through caves, pokemon might attack you. You don't see the pokemon before they attack you, but you will see the trainers.

The battle gameplay is fairly simple too. You go into the battle, click 'fight,' and then chose the move that you want to do. Or you can switch to a different pokemon that has a better type match up, maybe your pokemon is low on health, select 'bag' and give it a potion. The setup is very easy to use and would probably take only about 20 seconds to learn. (there is an instructional battle at the beginning of the game which makes it even easier.) The multiplayer option allows you to battle with your friends, trade with them, or just chat. Plus, its conveniently located in every Pokecenter, so you don't even have to turn the game off and go to the title screen. Catching pokemon is one of the key points of this game, to catch a pokemon, you usually have to weaken it first, maybe even use a move such as 'Sing' to inflict a special condition on it. When you think that the pokemon's Hp is low enough, chose a poke ball out of your bag, then throw it at the pokemon. (you can't catch another trainer's pokemon) then the ball will wobble a little, and if the pokemon doesn't break out, you will have a new pokemon.

There are over 150 pokemon to catch in FireRed, and both it and Pokemon LeafGreen have pokemon that you can't get in the other game, so to catch 'em all, you have to trade. Catching pokemon isn't always easy, the legendary pokemon such as Zapdos, Articuno, Moltres, and the elusive Mewtwo are very hard to catch, make sure you brought along a lot of ultra balls. Every pokemon has a different type, many have multiple types there are fire, plant, poison, fighting, psychic, ghost, steel, ground, normal, flying, rock, bug, water, ice, electric, dragon and dark. And it all plays like one huge complicated game of paper, rock, scissors. Every pokemon has a weakness to a certain type. If the attacking pokemon uses a move that the defending pokemon is weak to, it will double the damage, but if the attacking pokemon used a move that the defending pokemon has a defense against, the power will be divided in half. Plus, if the attacking pokemon gets a 'critical hit,' then the damaged will be doubled also. I've gotten over 40 hours on this game, and I finished it in around 15. This game has a lot of replay value, because even if you finish what most would call 'the game,' you will still have a lot of pokedex to complete, and you will still have the goal of heightening the level of your pokemon. (my blastoise is level 80!). Of course, you don't have to level up completely, but it sure feels good to say, 'mine is level 100'. Gameplay: 20

The graphics are nothing groundbreaking. You are a little chubby-looking 70-some pixel kid in a baseball cap (if you are a boy) while in the gameplay screen. You look a lot better when it shows what little it does before you toss your pokemon out in battle, but it really doesn't need very good graphics. All of the other trainers are the same little pudgy style figures until you go into battle, and then they look like anime also. If you run into a camper girl, don't expect the next one to look any different, all of the trainers are some different kind. One may be a lass, another a biker, but if one has a certain title, it will look the same as any other, even though everyone has different names. the pokemon look pretty good, even if they don't move. Even in your party it shows a little 20-some pixel pokemon figure bouncing up and down for each of your pokemon, which is a big improvement from earlier games, where three of your pokemon might have the same animation while you were looking at your party. Each town has a different style to it, from the quaint, two room houses of Pallet Town, to the brick-paved streets and yellow buildings of Saffron City. Graphics: 8

The sound is pretty good. There is no talking in the game, the pokemon make their sounds, but rarely can you make out their name, which is what they usually say in the show. The music is usually either light-hearted woodwind melodies, or triumphant adventure tunes. Most of the towns have a different tune, but some have the same one. The routes have different tunes depending on which route you are traveling. But many of these share the same melodies. There is a different tune playing while on your bike, and another while on the high seas, and yet another before battling, and a different one when battling. All in all, there is a lot of music in this game. Sound: 9 Stability: 5

Controls/Interface: the actions when in the gameplay screen are very simple, but the menus are more complicated, there are three different pouches in the bag: Items, Key Items, and poke balls. These are fairly easy to navigate, but I found myself looking for a TM pouch, which was in Pokemon Sapphire. The TMs are located in the Key Items pouch in FireRed, but that shouldn't bother a first timer. You can even change the order of your pokemon's moves, or move around items in the bag. You can also change the order of your party pokemon. Controls/Interface: 5

Violence: This game is all about battling, but no one ever dies. The pokemon only 'faint' or run out of energy. They can easily be healed at a Pokemon Center or with an item. They can also be burned or poisoned, but this only means that they get hurt a little each turn, and can also be easily healed. Violence: -2.5 Blood: -0 There is no blood. Gore: -0 There is no gore. Language: Someone might have said 'crap', but I can't remember. Language: -2 Sexual Dialogue/Innuendo: -0 None. Sexual Content/Nudity: Some of the girl swimmers wear bikinis and some of the guy swimmers wear *shudder* Speedos. Also, some of the people have short shorts, miniskirts, and/or midriffs Sexual Content/Nudity -3.5 Sexual Content: -0 None. Occult/Supernatural: In one of the towns there is a burial tower for pokemon where trainers that are labeled 'channelers' are. They use ghost type pokemon, and are some are supposedly possessed by the spirits of the dead pokemon before you battle them. Also, there is a pokemon in the burial tower that you have to battle, when you get done with the battle it says that it's spirit was calmed and that it passed on to the afterlife. Most pokemon 'evolve' when they get to a certain level, but the pokemon really only change appearance and become stronger in some areas, they are not evolving in the sense of people evolving from apes. Occult/Supernatural: -3 Occult/Supernatural used by Player: There are psychic pokemon in the game, but they use their own mind to do their attacks, and are in no way occult, there are also some 'psychic' trainers who seem to think that they can predict the future, also, their animation shows them levitating poke balls. There are also 'ghost' type pokemon, but they aren't really ghosts, that is just their type. There is also a move called 'Curse' in which the user cuts his own Hp and lays a curse on the defending pokemon, and every turn that that pokemon is in battle he is 'afflicted' by the curse. The animation of the move shows the pokemon sticking a huge nail into itself in order to cut it's Hp. Of course, you don't have to do this move, but most likely you will run into a trainer who's pokemon has it.

Most pokemon 'evolve' when they get to a certain level, but the pokemon really only change appearance and become stronger in some areas, they are not evolving in the sense of people evolving from apes. Occult/Supernatural used by Player:-3.5 Cultural/Moral/Ethical: you are the good guy and you defeat the bad guy. However, there is a 'Game Corner' where you can buy coins and use them to play the slots. And you can buy pokemon that were stolen by team rocket. Cultural/Moral/Ethical:-1.5 Prejudice:-0 None. Gross humor:-0 None Traditional/Family Values/ Decision Making:-0 Other than the stolen pokemon, I couldn't find anything.

This is an awesome game, although I found it a bit of a letdown after the awesomeness of Pokemon Sapphire. If you're wanting to play the Kanto epic again, or if you just want a great game, this is a good choice.