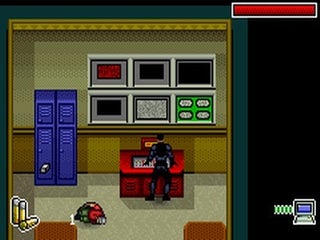 Atari has released the first true Mission: Impossible video games in Operation Surma for the three home consoles as well as the Game Boy Advance. The console wersions, while far from perfet, were still good stealth action games that carried serious potential of starting a new action series. However the GBA version, unlike its console brothers, has serious flaws that really cuts down on the game\'s values. In short, Surma for the GBA sports mediocre graphics, frustrating gameplay, and a hard-to-follow story.

This is supposed to be a stealth game, but you probably won\'t be doing much of it. This is simply because the game easy to the point of boredom and at the same time incredibly tedious. You\'ll spend much of your time wandering around trying to figure out where you\'re going to go. And the enemies don\'t make it any more interesting; the guards and enemies have incredibly bad vision, it seems, as they rarely see you until you are a mere ten steps or so away. Worse still, the opponents have a tendency to be random and do things they ordinarily wouldn\'t, which can make things frustrating. One thing I do like however is the gunplay. It is the best developed part of Operation Surma, and can be fun to do. Control, likewise, is pretty solid overall. The story is an area of gaming that can really spice up an otherwise bad title. Unfortunately, it looks like there is another failure. This plot, which is different than the console version of Surma, can be hard to follow at times, and doesn\'t really make that much sense. Don\'t expect much here. Overall, Operation Surma could last you to fifteen to twenty hours. This may seem good at first, but really this lengthy is because of the fact that it can get so difficult to move forward. There is no multiplayer mode that I am aware of.

The graphics in Operation Surma aren\'t really impressive, but they\'re not really bad either. The developers didn\'t seem to take advantage of the GBA\'s power, which is apparent given the lack of details in the environment. The character models look good overall, but the design for some NPCs (such as the guards) all look the same, leading a lot of graphical repetitiveness. But the biggest disappointment here are the cutscenes, which consist merely of character\'s portraits and dialogue underneath them, not unlike what you would find in an old Game Boy Color title. The complete lack of cutscene animation is a big letdown.

There are two pieces of sound in Operation Surma: guns firing and the Mission: Impossible soundtrack playing over and over again. Both can really get repetitive, especially the latter.

People killing people in self-defense (-4 pts) No Blood (-0 pts) No Gore (-0 pts) There is shooting in this game, but not in excessibe amounts. Ethan (the main character) deals chops to the neck as stealth kills. There is no blood or gore in Operation Surma.

Minor Swear Words are used once or twice (-2 pts) There are a few mild words spoken here and there during the cutscene dialogue.

Characters clothing is sexy or accentuates their sexuality (-1.5 pts) A couple of female characters have skintight jumpsuits, but it\'s hard to see because of the game\'s graphics.

Game requires rejecting authority figures or laws. (-2 pts) Surma requires you to break laws in other countries in order to progress through the game.

Operation Surma is a relatively clean game, but it\'s definitely not very good overall. I recommend that you avoid it.