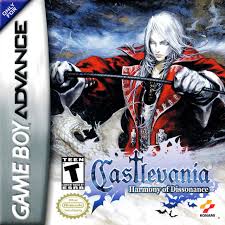 Castlevania: Harmony of Dissonance is the second of the three Game Boy Advance Castlevania games. While Castlevania: Circle of the Moon was the Game Boy Advance (GBA) launch title with great music, fairly simple visuals with a really dark color palette almost unsuitable for the original release GBA, Harmony of Dissonance takes the lessons learned and goes to almost the other extreme. It also implements common extras that become staples for future portable Castlevania renditions. It is also the only GBA Castlevania (the NES Classic versions don't count) where you take the role of a Belmont. You are Juste, the grandson of Simon Belmont, the vampire slayer from the original NES Castlevania game. You, and your friend Maxim, search in an unknown castle for your mutual friend, the missing Lydie.

What kind of game is this, and how do you play?

Castlevania: Harmony of Dissonance is a 2D action/adventure platform game with RPG (Role Playing Game) elements in it. Being a Belmont, you have access to the Vampire Hunter whip, which you use to kill your enemies. You also have sub weapons available, similar to other Castlevania games. These sub weapons include the Dagger, Axe, Cross, Holy Fist, Holy Water, and Holy Bible. There are also Spell Books available, which are combined with sub weapons to neat effect. There are five spell books, which include the Fire Book, Ice Book, Thunder Book, Wind Book, and Summon Book. Each combination has a different effect, so there are thirty possible spells, though you can only use five at a time, since though you can switch spellbooks, you can have only one sub weapon at a time. If there is no active spellbook, then the item's natural effect is used, which uses hearts which you collect from candles, enemies, and other things.

As you attack and kill enemies, you gain experience. The benefits from this are increased hit points, magic points, and maximum available hearts, as well as damage, both physical and magical. There are four attributes that affect your power. You STR (strength) affects how much damage you do physically, your DEF (defense) affects how much damage you take per hit, and your INT (intelligence) affects how many magic points you have and how much damage you do with spells. The fourth attribute is a bit different; LCK (luck) affects your likelyhood of getting good random drops from enemies when you kill them. Though not useful against bosses, it is really handy when just playing to have a high LCK. I found that often the stuff that enemies dropped was much better than the equipment I was finding at the time.

As you explore the castle, you find not only a variety of enemies, but occasionally you will find a special boss enemy, or another important item or relic. Some of these items are whip upgrades, which allow you to add an effect or do more damage. You will also find various pieces of armor that not only add to DEF, but can also increase any of your other attributes. Occasionally, you will find one of the five spellbooks, which if used correctly, can be very helpful. You can also find relics which either increase an attribute or even give you a new ability. There are also areas which you cannot access without some of these new abilities or items. It is common course that you would explore one area, find a few places (or even entire regions) that you cannot access, and then when you gain a new ability, like double jump for example, find that the new area is now open to you. Fortunately, this game offers a mini-map that helps a lot as you look for new places to explore. There are also a few other handy features which helps a lot also. Once you have visited your first save spot, this game offers a feature called 'Save Room' which is basically like an instant save. You pick back up at your last save point, but with everything, including the explored map, from when you did your last 'Save Room'. It works great, but it is rather abusable, which is probably why they did not continue this in future games. It is rather easy to beat something by the skin of your teeth, and not have to worry about making it back - your progress is secure. Another interesting feature is that the L and R buttons do not only backdash like in many other portable Castlevania games, but they also forward dash. This definitely helps pick up the pace, and gives both shoulder buttons a good workout.

In principle, the exploration/reward/backtracking/more exploration system works quite well, and it does here as well, though not as much so as I have seen in other games. I found that there were too many times here where I really felt lost wandering the halls of the castle aimlessly. Also, there were many boss battles where you fought someone, and there didn't appear to be any real reward. I also found that it was not difficult to skip entire areas and do them out of order on accident, because there was very little sense on where you were supposed to go next. I remember in particular where I beat a particular boss, and found the "lvl.2" of him before I ever fought the original. It's not that there is any problem with sequence breaks at all, but the pacing is just 'off'. I found that both of the other GBA Castlevania games did not suffer from this problem to this extent. Furthermore, you could easily play for several hours, progressing, and not really moving the storyline at all. While the game mechanic overall is still solid, this was an unfortunate detractor from my enjoyment of it.

There are some nice extras for beating the game that have since become standard fare on the portable Castlevania games. Not only is Sound Mode available where you can hear each of the game's tunes, but Boss Rush mode makes its first appearance in a Castlevania game. In this mode, you take your character and try to beat a predefined set of bosses one after the other in the quickest time possible. There is also the ability to play as Maxim, another character in the game's story. It's neat, and works well.

How are the graphics in this game?

Though the Nintendo DS Castlevania games certainly have better graphics, I would say this one has the best graphics of all of the GBA games. The character models are all larger and a bit more detailed. That's not to say that some of the bosses in Aria of Sorrow (the one that follows this one) don't look better, but in general this game has more graphical detail, though perhaps not as smooth in the animation department as it's sequel. It also has a few quirks. For example, perhaps as a reaction to Circle of the Moon's very dark color palette, everything is rather bright, which is really good for those who use Game Boy Advance's without a backlight. Also, the main character Juste has a blue outline around him. It makes it a lot easier to see him, but it does give him a funny 'glow'. Other than those nitpicks, it does look very nice. Some of the areas have several layers of impressive scrolling backgrounds, or fog effects in the air above. Considering the GBA hardware, it's very good. One of this game's biggest appropriateness issues stems from this greater detail - the Harpy monster in particular. In one of the other GBA games you really couldn't tell if they were wearing clothes or not.. they were too small to tell if it was a bikini or nothing at all.. in this game it's rather obvious, especially since the breasts face the player. I don't quite understand why producers feel these things are necessary, but there you have it. Aria of Sorrow has this problem as well, but the sprite is smaller so it's not quite as obvious. Other than the content problem, the graphics are very good for a 2D GBA game.

What about the sound?

What this game makes up in graphics, it unfortunately lacks in sound. It's not that the sound effects are bad; they are just fine. The music in this one is somewhat lacking. Instead of the high quality pieces that the other GBA Castlevania games offer, Harmony of Dissonance has music that sounds really low in quality; almost NES like with the FM synthesis style it has. Is it obnoxious? No. It's just a bit of a shock, and a step back, given the rich musical history of the Castlevania series.

Unfortunately, this game substantially falters here. It's biggest flaw is what I noted in the graphics section - that for some enemy models, the Harpy in particular, they are bare-breasted, and obviously so. I wish developers would understand that a good (or bad) game is not made any better by including elements like these. Oh well. Other than this particular monster, there are actually far less poorly dressed enemies than the sequels have, but it's still too bad that they had to add one that is also fairly common in one part of the game.

There are other areas to be aware of as well. There is spoken a 'da*m' once or twice in the story throughout. This game is in an occult-like environment, which is Dracula's castle. You fight all kinds of evil enemies, like ghosts, specters, skeletons, dragons, demons, witches, Medusas, and various other things of that nature. There are also soldiers, lizard men, giant bats and the like. There are no pentagrams, though a few enemies do spin hexagrams into their routines On the positive side, there is a clearer separation between the good and evil side than some games, particularly the sequels. Though you can summon a few attacks with the summon tome, and you do use spells in this game, and a few items are most likely evil, the subweapons are definitely intended to be good, with items like the Cross, Holy Bible, Holy Water, and others. Though it certainly represents good vs. evil more in the pop culture sense than in any biblical sense, it's still good to see that here with far less blurring of right and wrong than some other games have. Nevertheless, the positive issues do not overshadow the negative ones; think carefully on this one.

This is a fun Castlevania game that follows along in a similar vein to the other GBA Castlevania titles, but in some ways it's missing something. I found the map layout to be rather disappointing, and I have a lot of tolerance for these things if it's fun doing it. With just a little too little guidance compared to other titles, I found it lacking in the pacing. But even still, it's a solid playthrough. I found it to be around a ten hour adventure, though many could complete it faster since I tend to collect pretty much everything. This is a much better deal than this game by itself as part of the Castlevania Double Pack, so if you are interested, look for it there. Even still, please consider the appropriateness issues before purchasing.