Thank you Nintendo for sending us a Dr. Mario t-shirt, a stuffed Goomba, and some delicious caramel-filled chocolates!

Dr. Mario was an instant success when it first launched in 1990. Your objective in the original game is to eliminate the viruses by covering them with the same colored capsules. Most of the time, the capsules have two colors that you have to rotate and arrange appropriately to avoid them building up. To win, you have to eliminate all of the viruses by stacking like colors. The classic game required you to match-4 but this remake only requires you to match-3.

In this mobile remake the capsule float up instead of down. You can tap to rotate them. The capsules can also be dragged into place even if there is a wall blocking it. If only half of the capsule is used the other half will float upwards and you can drag it where its most needed. There are various helper items like score and skill boosters. Rainbow capsules are extremely helpful since they are universal and work with all of the virus colors (red, blue, green). Additional capsules are available for diamonds. If you run out of capsules you’ll lose the level! 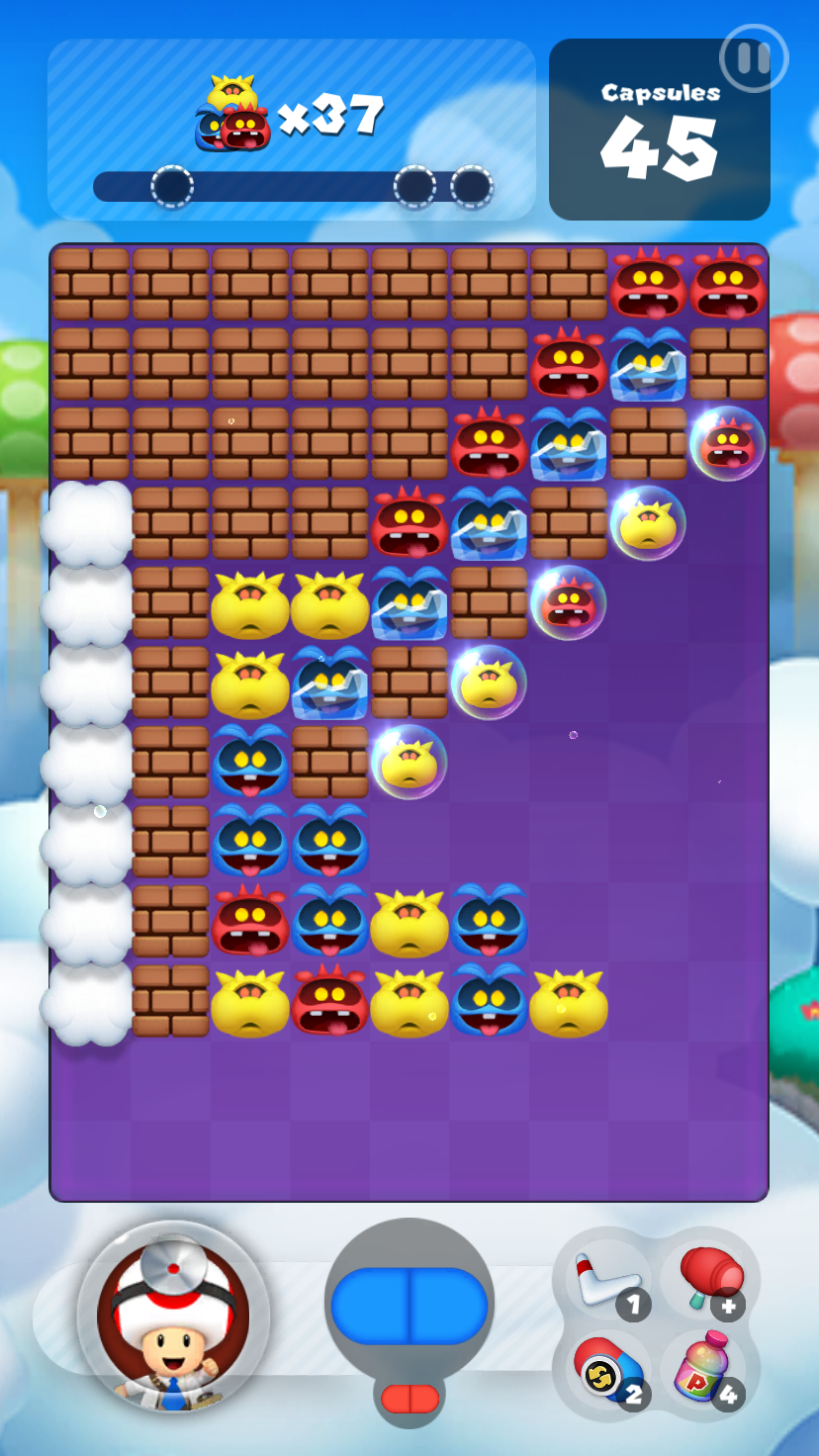 Strong Points: Fun gameplay with online matches
Weak Points: Gameplay has been changed to your typical match-3 puzzle game; internet connection required to play
Moral Warnings: Be careful with storing your credit card information on your mobile devices as this title can get expensive with micro-transactions; cartoon violence

Most of the time your objective will be to eliminate all of the viruses on the level. Sometimes they are not visible and you have to break blocks to reveal them. Viruses that are covered in ice or in a bubble have to have their colors matched twice in order to truly defeat them. Occasionally you’ll have to only uncover coins or break all of the blocks to finish a level.

Like most mobile games, you’ll be awarded between one and three stars depending on how many capsules it took you to complete the level. Unused capsules earn you big points. As you clear levels you’ll uncover new areas and challenges to complete. Online matches are available and it doesn’t take long to find another player to compete against. The doctor you choose to play as will give you an advantage online!

Mario isn’t the only lab coat wearing savior in Dr. Mario World. There are multiple doctors available and each one has a unique ability at their disposal when their power meter is fully charged. I usually played as Dr. Bowser who can clear two rows at random. As you earn gold from completing levels, you can hire more doctors and assistants help you get rid of all of the viruses taking over Mushroom Kingdom. 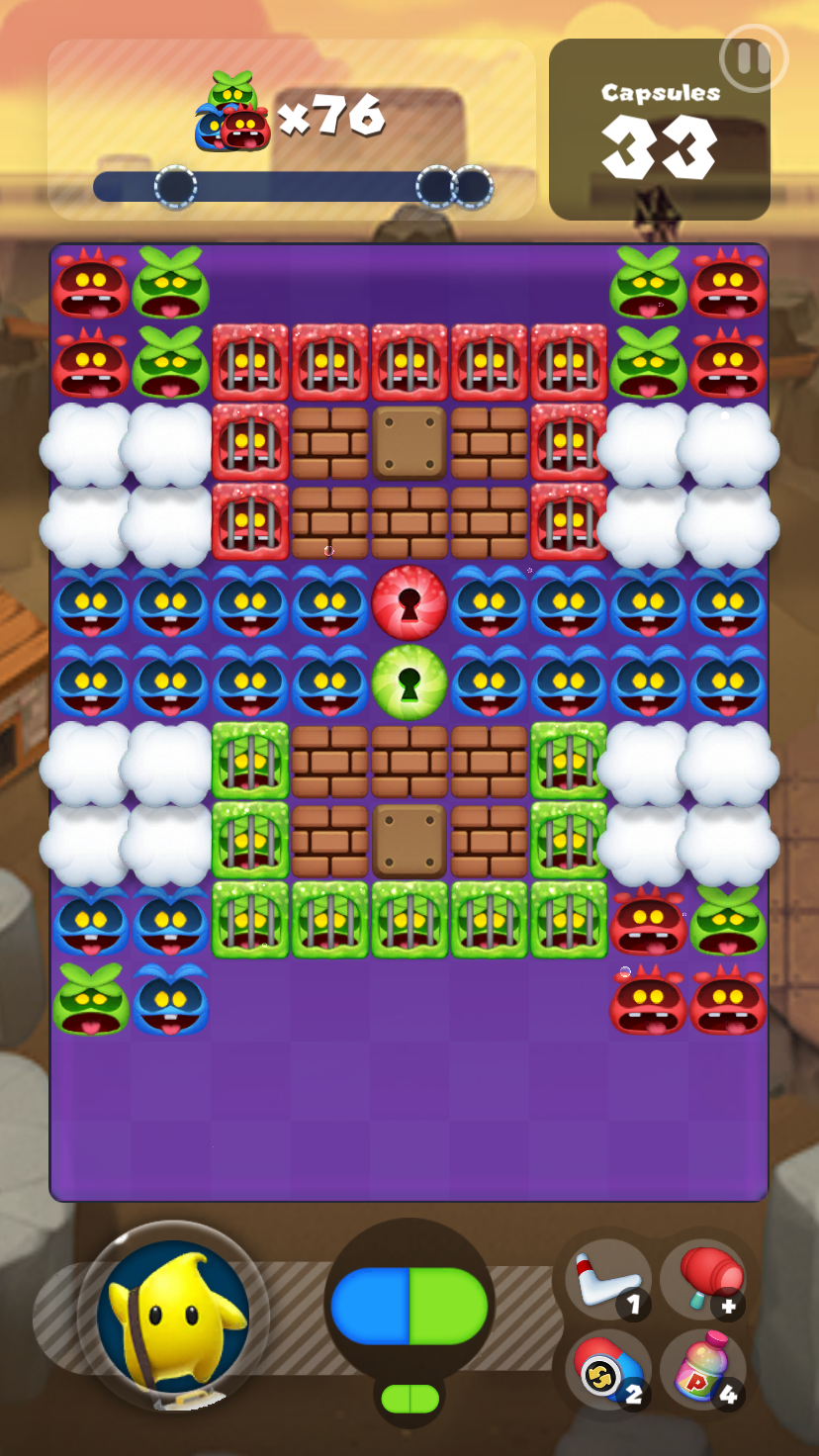 The other currency in this game is diamonds which you typically have to pay for. You can earn some by linking your Nintendo and social media accounts, but buying them is not cheap. Twenty diamonds will set you back $1.99 while 1,500 of them are $69.99. During the tutorial levels you have an infinite number of tries/lives. If you want that ability later on in the game, you’ll have to spend 30 diamonds for thirty minutes of infinite continues. Lives are normally maxed out at five and replenish every thirty minutes until it’s maxed out.

Dr. Mario World is well polished and has lots of various events to keep players coming back. The visuals are vibrant and more detailed than the NES version I am accustomed to. The ability to play as different doctors with unique abilities adds a new twist to the gameplay. The chiptune music is more refined, but still recognizable on the mobile version.

Though this game is suitable for all ages, I’d recommend not having your credit card information stored on your (or your kid’s) mobile device to avoid the temptation of buying diamonds. Despite the gameplay differences from the original, Dr. Mario World is still fun to pick up and play. Be warned that an internet connection is required to launch and play this title.