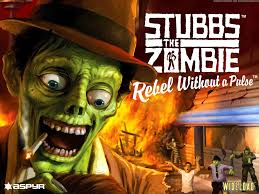 Stubbs the Zombie in Rebel Without a Pulse for the Xbox is, undeniably, one of the most unique games that a person could play. The biggest question raised by this somewhat odd and entertaining game is: How does it stack with the fundamentals of the Christian faith? Let\'s take a look, shall we?

Just in case you couldn’t tell, in this game, you play the part of a zombie. Specifically, a zombie named Stubbs, who was an insurance salesman who was murdered in the 1930’s and buried in an unmarked grave in Punchbowl, Pennsylvania. When billionaire Andrew Monday decided to turn Punchbowl into a “city of the future”; in 1959, Stubbs woke up, and decided to try his hand at finding love -- and a few human brains to nibble along the way.

The gameplay is oddly enjoyable. It is a very different departure from most games, in which the player generally tries to send the un-dead zombies back into their graves. Instead of being a very strong, powerful, gun wielding Rambo-like figure, Stubbs is somewhat slow, stringy, and melee-focused individual. His attacks are easy to make, and there are an interesting variety of them. Stubbs can smack people around with his grubby mitts and eat their brains or rip people’s arms off and beat them to death with them. He can also use a flatulence attack to stun enemies who are surrounding him or throw one of his own internal organs as a grenade. He can even detach his hand and use it as a spy or a mind-control device. Finally, he can detach his head and use it like an explosive bowling ball. Each one of these attacks will turn Stubb’s victim into a zombie, ready and willing to aide Stubbs in his cause. The Zombies have an intelligent AI, but can get in the way in tight corridors. Though you can give them a shove in the right direction, sometimes they will surround you and limit your mobility in a hectic situation (such as a soldier’s rocket screeching towards Stubb’s head.) Speaking of AI, the enemies are appropriately intelligent and difficult on the four difficulty levels. They are easy, normal, difficult, and impossible. Each one has a unique and apt description: “Easy: The humans are almost as braindead as the zombies. A cakewalk.”, etc. There is a cooperative multiplayer mode, which adds to the game’s replay ability. The biggest flaw with the gameplay is that it easily becomes repetitive: smack human, eat brain, repeat. It is a fun diversion for a while, though, but don’t expect it to be a 20 hour epic that keeps you on the edge of your seat. Stubbs is best taken in doses. Gameplay rating: 18/20

This is the section where things begin to get ugly. While the character models are spot on (the glowing cigarette dangling from Stubb’s lips is a nice touch,) the textures are a bit drab and repetitive, and vehicles (sans the tank) look rather plastic. The lips move when characters talk, which is good, but this feature is simply expected of games these days. The level design, as well, can be a little repetitive in places. The CGI movies help make up for this, though, as it’s presented in either a 1950’s film effect, or the graphics are slightly beefed up for the films. All in all, the graphics are pretty good, but not really remarkable. Graphics rating: 7/10

If there’s one thing that this game does flawlessly, it’s the sound. Where there is background music, it’s all done in period pieces such as “;Mr. Sandman,”; “;Lollypop,”; etc., or it has a soundtrack that might be found in a 1950’s drive-in theater movie. The sound effects are phenomenal, and the tongue-in-cheek humor of some of the humans is hilarious. Scientist will mutter as they see one of their comrades fall, “;Even I wouldn\'t do that...and I have no ethics!”; The dialog is wonderfully done in order to satirize what many people consider to be the “;good old days,”; and show that they weren\'t always the picture perfect places they were made out to be. The voice acting for the characters is spot-on. The zombies make their typical moanings of ”braaaaaiiiinnnnsss” but by far some of the most enjoyable dialog is from the barber-shop quartet security guards, as they state everything they’re doing or will do in song. All in all, an audio treat. Sound Grade: 10/10

I encountered no issues while playing this game. There were no obvious bugs or exploits. The one thing that I would have changed, however, is to make Stubbs a little faster, as it’s hard to catch a fleeing enemy, and when said enemy is holding a rocket launcher, bad things happen to Stubbs. Stability Grade: 5/5

The controls are very intuitive, and very reminiscent of Halo. The fact that the project was spear-headed by the ex-founder of Bungie, the studio that made Halo, has a lot to do with this. The biggest change came in that the developers had to assign special attacks to specific buttons, so while the left stick still controls movement and right controls viewpoint and A is to jump, they changed a good deal as well, but the controls are intuitive enough that the adaptation is easy. Control/Interface Grade: 5/5 That leaves an initial score of 45/50, but wait, it’s going to take quite a few knocks!

This one is difficult to gauge, as the main protagonist isn\'t human and the humans in the game are not trying to kill each other. (It is a city of the future, after all, where crime between people has disappeared.) However, considering the fact that Stubbs was, at one time, human, I\'m going to give it a -5 for \'People Killing People in Cold Blooded-murder,\' because there is quite a bit of brain-eating and arm-ripping going on. Violence score: -5 Blood Oh yes. Lots of it. Like the horror films it is vaguely based off of, it has copious amounts of blood, mainly human, and it sprays everywhere when a brain is eaten, an arm torn off, or basically any human death. Blood score: -2.5 Gore Again, difficult to determine. Though there are visibly detachable body parts (arm, head, guts,) it’s not anywhere near as graphic as a human sacrifice as found in the movie Indiana Jones and the Temple of Doom. Therefore, I\'m going to give it a: Gore score: -1.5 Language The language factor was, surprisingly, not much of an issue. I heard some minor swear words, but nothing that a censor would have major headaches over. Language score: -3 Sexual Dialog/ Innuendo None. S.D./Innuendo score: 0 Sexual Content / Nudity The only character provocatively dressed is Mrs. Monday, Andrew Monday’s mother and Stubb’s key love interest. However, it is potentially provocative enough to warrant mention, and there fore gets a score of: Sexual Content / Nudity score: -1.5 Supernatural/Occult in Game Setting This category is the single most difficult one to score. There is no mention of the occult directly. There are no objects or images of an occult nature, even in the explanation of how Stubbs became a zombie. Since it falls between two key categories, I give it the following score: Supernatural Score: -1 Supernatural Forces used by Player Again, very difficult. The act of eating brains in the game is not seen as a pagan ritual or rite, just something natural that zombies do. It isn\'t really fairy tale magic, in that the content is too dark to be a fairy tale (modern one, at least,) but no actual magic is present, save the unexplained way Stubbs can regrow his hand, head, and organs. Since these things are unexplained, I\'ll categorize them as magic, but give it a different score: Supernatural Forces score: -1 Cultural/Moral/Ethical Issues This game does provide an environment of cultural rebellion, of a sort, as Stubbs creates his own society of zombies from living humans who accept him. However, it’s obviously not promoting rebellion on any level. Some may claim that the game promotes cannibalism, but I would disagree. The nature of zombies -- purely fictional beings -- is to eat brains. It is not the nature of humans to do so, and it’s obvious from the game that humans look on Stubb’s actions only with disgust. Cultural/Moral/Ethical score: 0 Gross humor The game is absolutely full of gross humor. One of Stubb’s attacks is farting in order to stun his enemies, and you actively control Stubbs as he urinates into a water purification center in order to contaminate people through the water main. There are also a few subtle crude jokes thrown in that come from the actions of some of the robots that have been implemented for mankind’s convenience. Gross humor score: -2.5 Decision making The only decisions you have are to eat brains and live and find the woman your love. It definitely breaks with traditional values in the regard that there is no sanctity of human life; people are just considered to be the next meal. Decision making score: -2.5 Appropriateness 20.5/50 Oh dear this leaves Stubbs the Zombie in Rebel Without a Pulse with a mere 74.5% in all. Let me say this: the game is rated Mature for a reason. This game was never intended for children, but for adults who are able to handle the violence and gore, and who can understand the satire behind it. I would say be careful with this game if you are un-accustomed to violent and gory games, and if you have never seen a horror movie containing a zombie, you may want to watch one first to realize some of the subtle satire contained within. This is a fun and enjoyable game, but please remember it is not for younger audiences.